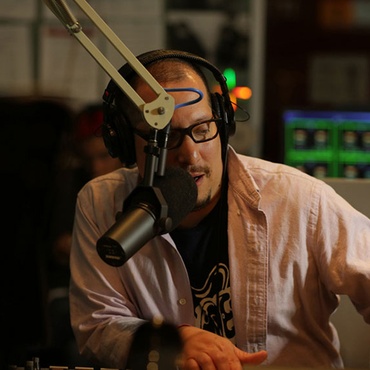 Working as a KCRW DJ is a dream come true for Mario Cotto, a preacher’s kid from North Philadelphia.

A former middle school teacher and improviser, Mario moved to LA to pursue a career in sketch comedy. He started volunteering at KCRW, assisting longtime DJ's Eric J. Lawrence, Jason Bentley, Chris Douridas and Tom Schnabel. Once Mario realized he was spending more time at the station than at the theater, he knew this was where he belonged. Andy Shauf: ‘Wasted On You’

5 Songs to Hear This Week: Biig Piig, Contour, Circa Waves Come be a part of the unveiling of KCRW’s TOP ALBUMS OF THE YEAR a whole 24 hours before the general public! Fresh off a week away, Novena and Anthony are back to greet the sunrise, celebrate Brazilian legend Erasmo Carlos, and give you a shot at tickets for The Smile.