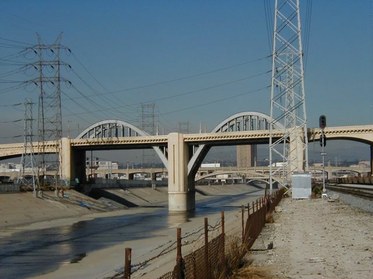 The Sixth Street Viaduct, connecting Los Angeles's downtown to the neighborhood of Boyle Heights, is a historic structure designed eighty years ago by Merrill Butler of LA’s Bureau of Engineering. But the structure is crumbling and has to be rebuilt. For a long time it has seemed as if city engineers were going to replace it with a utilitarian but boring structure. Then last week they announced an international competition to find a designer who can build something really imaginative. Mayor Antonio Villaraigosa offers his thoughts on why the city opened up the challenge to a wider audience. But what should the bridge look like? Advocacy groups like Friends of the Los Angeles River (FOLAR) are pushing for an ambitious design. Alex Ward, architect and chair of FOLAR, describes his vision for the new bridge. It’s not unusual for cities to use competitions to attract innovative and high-level public architecture. Gary Lee Moore is LA's City Engineer and explains how the City of LA plans to select its designer for the $400 million project. More information is available at the competition website. 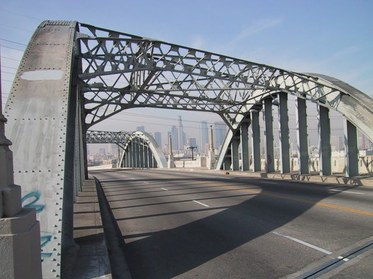 The view of the bridge from 6th Street. Photos courtesy City of Los Angeles Bureau of Engineering