A young girl holds up a sign protesting the proposed synthetic grass field at a meeting at Westwood Recreation Center on May 23. Photo by Avishay Artsy/KCRW

And it all came to a head at a town hall meeting on May 23, when several hundred people spoke passionately about the proposal.

There’s already a small soccer field at Westwood Recreation Center in West LA, but this proposed synthetic multi-use sports field would be regulation sized, 180 feet by 300 feet. Opponents of the plan want to keep the natural grass field. 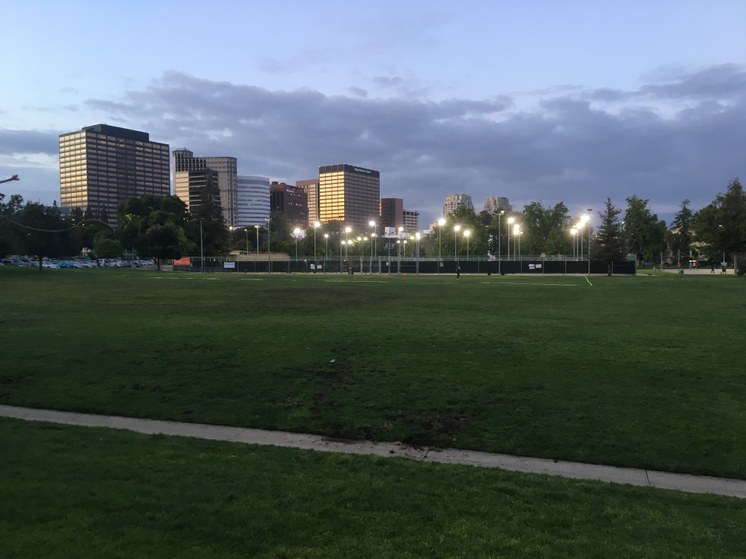 The field in question has been grassy thanks to the recent rains. Supporters of a synthetic field say the field is usually more brown than green. Photo by Avishay Artsy/KCRW

The proposal came out of a tragedy. A twelve-year-old boy, Tommy Mark, died in his sleep in April of 2018. He loved soccer and played for LA Galaxy’s youth team.

His parents are Doug Mark, an entertainment lawyer, and Nikki Mark, the former executive director of the LA Football Club’s Academy.

They were already advocating to get a larger soccer field installed at the park, and after their son’s death the idea morphed into a memorial for Tommy. They held a fundraiser concert at the Orpheum headlined by Beck and Billie Eilish, and a comedy benefit at The Comedy Store with Tig Notaro and others. Those events and a crowdsourcing effort raised $1.2 million to put in the memorial soccer field.

“For us it was never about green space, open space versus synthetic turf. It was about a used field or a not used field. A field that has dogs typically running on it, versus a field that has children and adults playing on it,” Nikki Mark said at the meeting. 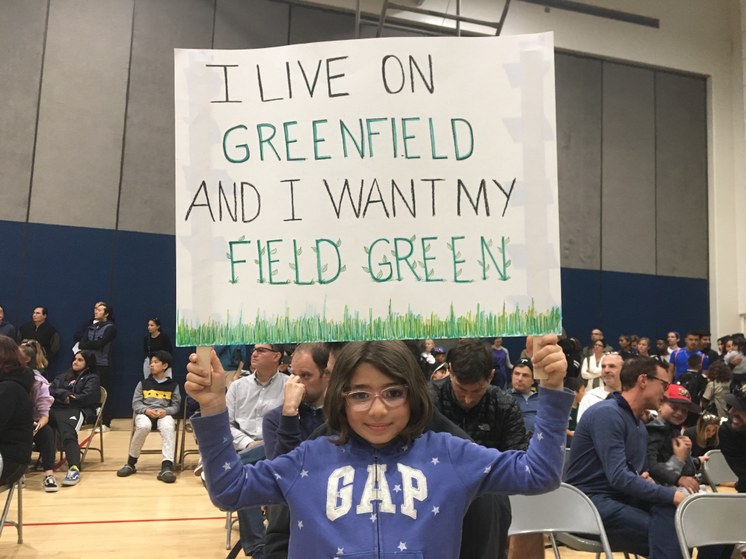 Children at the May 23 town hall meeting held handmade signs in protest of replacing an open field with a soccer field. Photo by Avishay Artsy/KCRW

Some supporters of the project showed up wearing black knit caps with Tommy’s initials, TM, woven into them.

“Tommy was such a wonderful kid. He deserves to have something like this in his name,” said Kirk Schenck, and attorney and the father of one of Tommy’s friends. “When the community can get the funding for great facilities like this, and the taxpayers don't have to pay for it, why would we not accept that great opportunity?”

Critics of the proposal have expressed concern that the field will primarily benefit private soccer clubs instead of the general public, and will serve as a feeder for the LA Football Club.

Opponents of the soccer field also complained about a lack of transparency in the process, and there was a lot of anger directed at the Department of Recreation and Parks and the Park Advisory Board for not seeking public input sooner.

“The city and the donors have been working together for quite some time to develop this plan and the community only just heard about this about three weeks ago. So we're trying to react in the time we have,” said Jaime Rooke.

Another common refrain was the need to preserve open green space, something that is in short supply in West LA.

“I am completely in support of memorializing Tommy. It sounds like he was a young man who touched a lot of people. I just don't think that taking away our natural open space is the right way to do that,” said Jim Lamb, who added that he lives in a nearby apartment with his wife and four kids, and doesn't have a backyard. 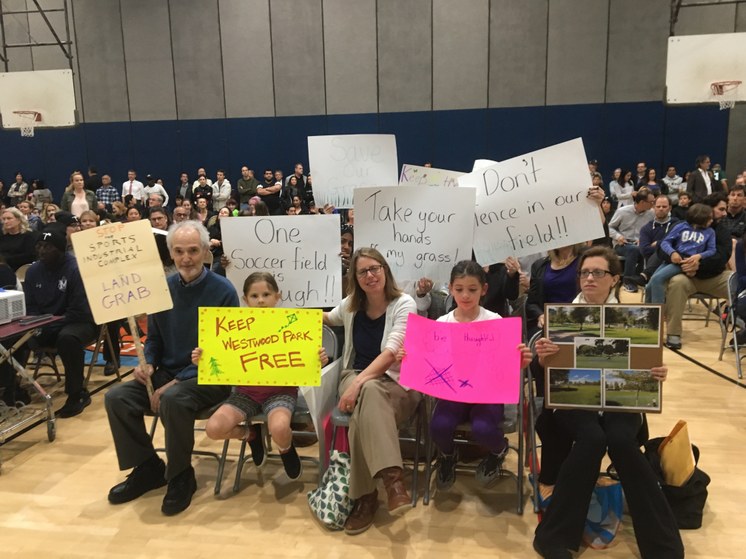 Tom Gibson, a planner with the parks department, said they’ll use a synthetic turf made of a nylon thatch that’s non-allergenic and non-toxic, and an infill material called zeolite. The department has moved away from using crumb rubber, which some believe has links to incidence of cancer. Gibson also made the case for synthetic turf as eco-friendly. Plus, he says, grass fields require constant maintenance, chemical fertilizers, and water.

“The all American manicured grass lawn which perhaps is iconic is not so natural a surface as it appears. Fertilizing two to four times a year, the regular use of lawn mowers and added labor to maintain a turf sports field makes grass lawns a poor choice,” Gibson said.

At the heart of it, this is a story about community, and how issues like changing a park gets people fired up. Because LA is so big, people feel connected to their immediate community. There were people at the forum who talked about the time they spent as children at that park, and bringing their kids to play in that grassy field.

The Department of Recreation and Parks will now process the input from the meeting for further review. There will still be an environmental review, and it will need the City Council’s approval.

A turf war in Westwood; climate change at the Aquarium

Jerry Schubel, oceanographer, president and CEO of the Aquarium of the Pacific in Long Beach, has been dreaming for decades of creating a venue to raise awareness about...