Jerry Schubel, oceanographer, president and CEO of the Aquarium of the Pacific in Long Beach, has been dreaming for decades of creating a venue to raise awareness about ocean acidification and climate change. And he wanted to do so in a way that delivers the message “in a playful way.”

Now that dream has been realized in “Pacific Visions,” a $53 million expansion of the existing aquarium that educates visitors, explains Schubel, about what “we humans are doing to all of those animals in the original building and all the other animals on this earth. It lets the visitor explore pathways to alternative futures and to discover how we human beings are going to determine what that future will be for all life on Earth.”

DnA visited the new exhibit and learned from its early visitors if they got the message. 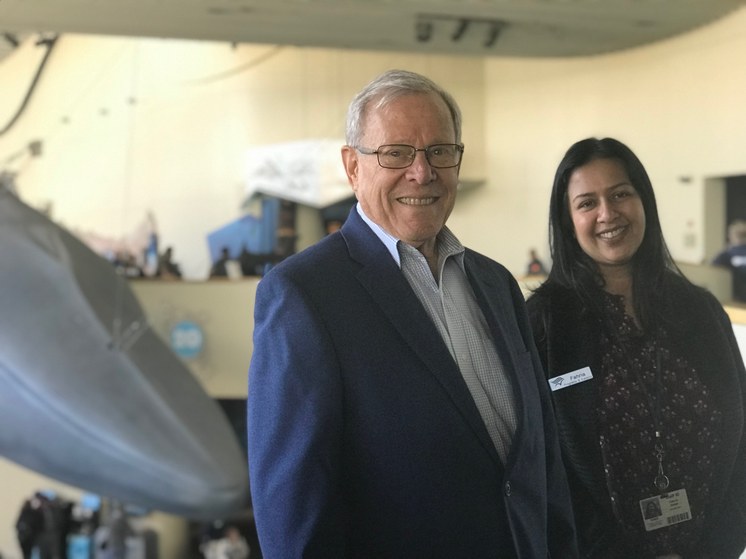 The Aquarium of the Pacific’s president and CEO Jerry Schubel, left, and the aquarium’s architecture director Fahria Qader spent over a decade designing “Pacific Visions.” Photo by Frances Anderton/KCRW

To deliver Schubel’s “playful” message about a topic as serious as climate change, he and a large team of consultants deployed architecture, sculpture and lots of digital effects.

The experience starts with the cheerful blue, bulbous, biomorphic building by San Francisco-based firm EHDD, featuring non-reflective (to protect birds) blue glass panels that change shades with the light to mimic the moods of the ocean.

Then visitors take a journey that includes an “art gallery” designed by Convivial Studio, with wall-size digital screens showing fish, coral and plankton, as well as glass sculptures of sea life hung from the ceiling.

There’s an “orientation gallery,” including a two-minute film about human impacts on the planet, and a virtual waterfall created by Cortina Productions that uses motion sensors so it appears that your footsteps cause water to splash and fish to swim away from you. 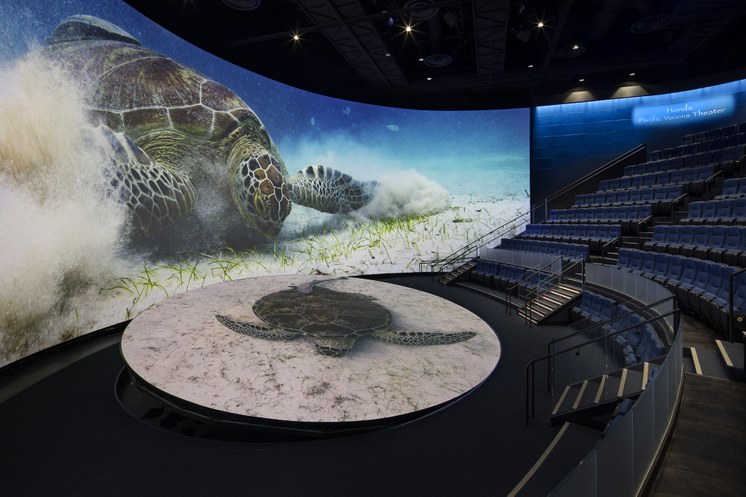 Still from “Designing The Future,” an 8-minute film about human-created climate change and how to design our way out of it. Image courtesy Aquarium at the Pacific

Visitors are then led into the 300-seat Honda Pacific Visions Theater to watch an eight-minute film called “Designing Our Future.”

This offers a fast-paced primer on ways in which we humans are messing with the earth and means to save it. Proposed remedies range from alternative fuel sources (including, provocatively, nuclear power) to ways to change our eating habits to the construction of smart, green buildings that store energy and grow food.

The ocean as economic engine

Schubel wants to stimulate interest in what’s called the “blue economy” -- the idea that we should use the oceans for economic growth, but do so in a way that still preserves the health of the ocean.

Jerry Schubel tells DnA that other countries are ahead of the U.S. in developing their blue (or ocean) economies, whose sectors include aquaculture -- or sustainable fish-farming -- offshore wind power, biotechnology and desalination. And moving ahead with this is urgent, he says, given the fast rate of human-caused species extinction (evidenced in the May 6 U.N. Report on species extinction.)

“More than half of our country is under the sea and we are not using it to benefit society. We know how to do it without adversely impacting important marine ecosystems. And we want to encourage this to happen so that we can create this glorious future,” Schubel said.

Then there’s the finale, the “Culmination Room,” filled with interactive exhibits.

They are intended to serve as Schubel’s “call-to-arms” to reduce our energy use and to move to cleaner energy sources ; to change our dietary habits to reduce the impact of farming on the planet; and to reduce our water consumption while using stormwater capture and other water-efficiency technologies. 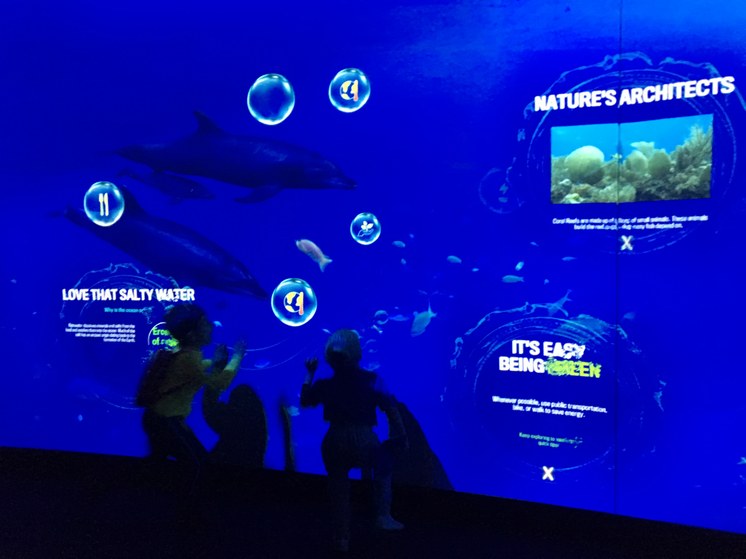 Kids enjoy popping bubbles on the digital wall in the “culmination gallery” at the Pacific Visions exhibition. Photo by Avishay Artsy/KCRW

Visitors can press buttons to bring up maps showing anticipated populations, get quizzed on personal water and energy use, and “pop” moving bubbles to reveal scientific information.

The bubbles, says project director Fahria Qader, are “geared for little children who can't read too well or just are more interested in images. So it's a way to integrate people of all ages.”

Jerry Schubel is now 83 years old. But his exhibit is primarily designed for the next generations, prompting the question: will schoolkids on tours to the Aquarium find all this entertaining? 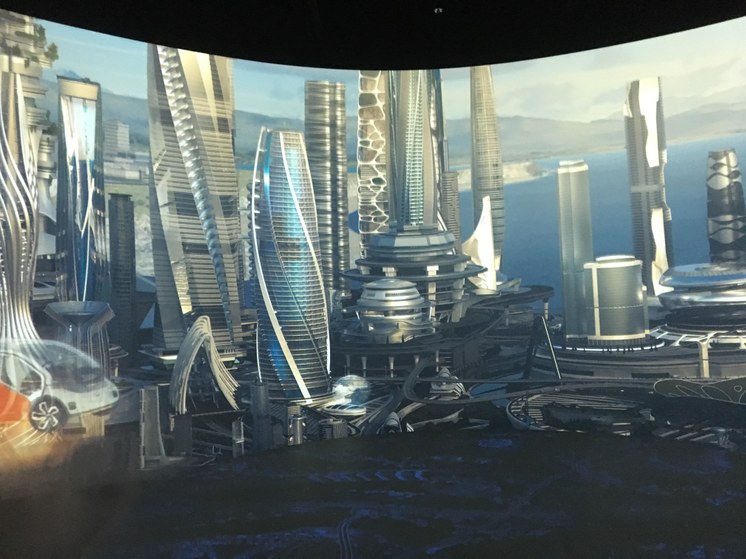 An image of the city of the future, from the “Designing Our Future” film. Photo by Avishay Artsy/KCRW

Conversely, is it the kids who will be most receptive? After all, they are currently leading the global walkouts for action on climate change -- because in their view the parents have dropped the ball.

DnA checked in with a teacher who took high schoolers on the first tour, and with parents and children visiting on the holiday weekend.

The high schoolers, already on an environmental track at Lakewood High, loved it, according to teacher Stephanie Bauer, who pointed out “they are the ones who are going to be the decision-makers of the future.”

And the younger kids and their parents? Well, they loved the bubbles. One dad told DnA: “The bubbles are cool. I don't know if they're actually reading the information once it comes up -- about coral bleaching and saving the world and things like that -- but it looks beautiful.” 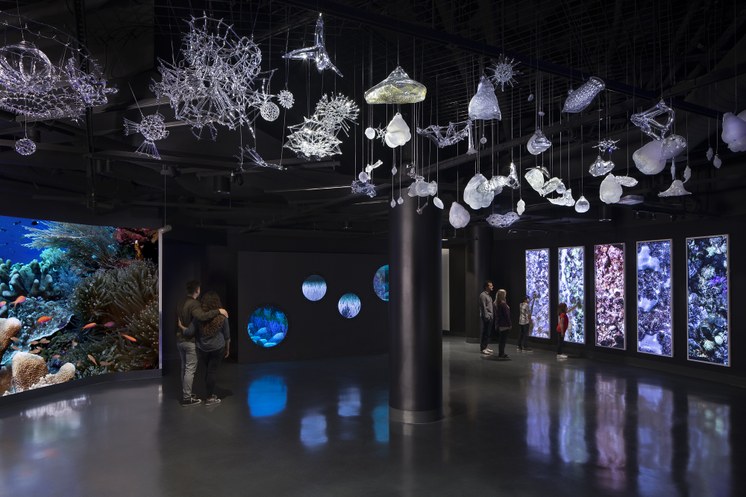 Inside the “art gallery” at Pacific Visions. Image courtesy Aquarium at the Pacific

A mom said she was surprised to find such a didactic exhibit at the aquarium but loved “that it's educational as well as visually spectacular for the kids.”

These reviews should please Jerry Schubel. As he told DnA at the outset, the goal of “Pacific Visions” is to deliver serious messages in a way that does not feel like a downer.

“We’ve tried hard not to make people feel guilty -- or not very guilty. But, you know, it's like the Joseph Campbell Power of Myth. You drag people down into the depths of despair and then a hero comes along and saves them. In this case all of us created this urgent situation. And the only way that we're going to get out of it is if we all become heroes. And so this is a story about, if you want to become a hero, these are some of the things to do.”

A turf war in Westwood; climate change at the Aquarium

Jerry Schubel, oceanographer, president and CEO of the Aquarium of the Pacific in Long Beach, has been dreaming for decades of creating a venue to raise awareness about...