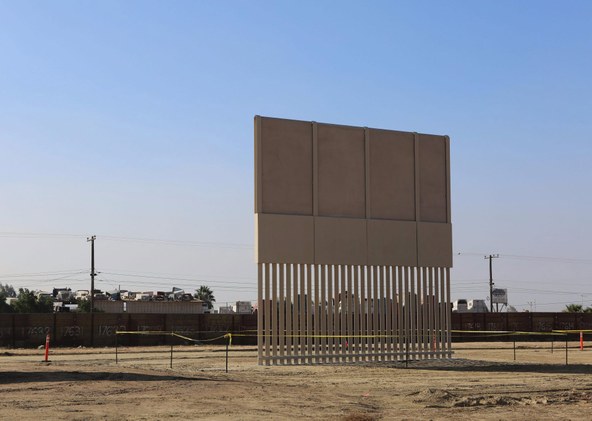 This is one of the three border wall prototypes constructed that people are able
to see through because at least the bottom half is made of spaced steel bars.
Photo by Jenny Hamel/KCRW.

Soon after President Trump took office, he put a call out for builders to come up with designs for a new US-Mexico border wall. Eight entries were chosen and over the last month, contractors have been building the prototypes at a construction site in Otay Mesa, a San Diego community along the border.

KCRW's Jenny Hamel toured the structures with a border guard named Tekae Michael, and says the mammoth sections, made of concrete or a mix of concrete and steel, loom large over the existing "Vietnam-era" fence.

But she suspects the structures -- to be tested soon for durability and penetrability -- are a "visual spectacle" that are unlikely to become a wall. After all, the Department of Homeland Security allocated $20 million for the prototype competition, but building a wall that spans the US-Mexico border would run $20 billion.

What may be realized in the end, she says, is that winning wall types wind up patching up sections of the existing border. The result? Not a "beautiful wall" but maybe a "beautiful patch." 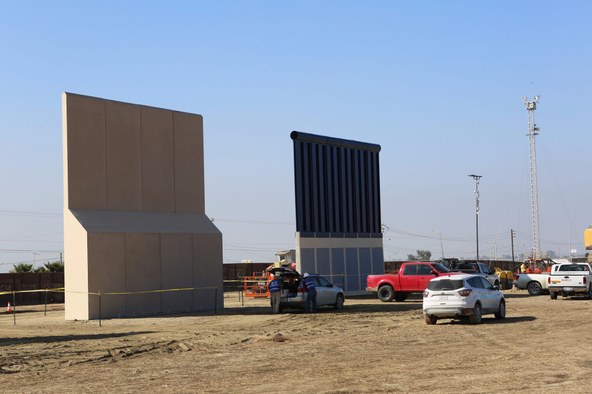 This prototype has a tan brick looking facade with spikes on the top.
All of the prototypes stand at about thirty feet tall,That fence is made of
rusted landing mats from the Vietnam era and stands 8 to 10 feet tall.
Photo by Jenny Hamel/KCRW.

US Customs and Border Protection acting deputy commissioner Ron Vitiello said the construction of these prototypes align with the mission of the agency.

Vitiello said if funding for a border wall isn't secured, one or more of the designs might be incorporated to replace sections of rundown fence. Currently, about one-third of the nearly 2,000-mile border between US and Mexico is lined with fencing or walls.

In mid-November, a private company will conduct testing on the prototypes to see if they withstand climbing, digging or power tools. 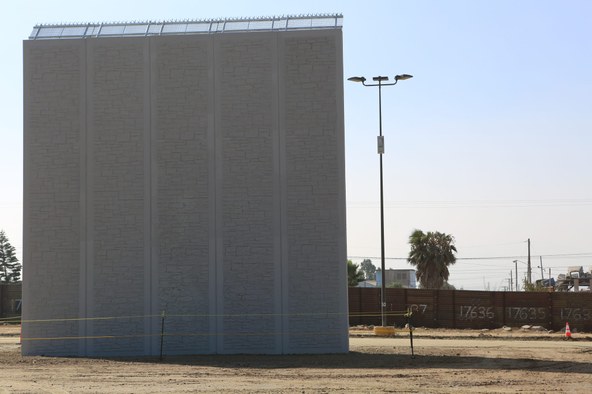 The prototypes are a mix of concrete, steel or a combo of both. In this picture,
the wall section with dark blue steel on the top half has a rounded top,
making it less easy to get a grappling hook around.
Photo by Jenny Hamel/KCRW.

While many say there's no appetite in Congress to fund the wall, Trump has demanded it. He has also said that Mexico will pay for the wall. (Mexico says it will not.)

Trump has asked Congress for $1.5 billion to build 75 miles of a border wall in San Diego and parts of Texas. That request is pending.

This is one of the three border wall prototypes constructed that people are able to see through because at least the bottom half is made of spaced steel bars. Photo by...