There are all sorts of prohibitions against working on Shabbat, the Jewish day of rest, including pushing a stroller or wheelchair, or carrying a baby or a cane. And the rules apply differently whether you’re in a private or public space. The eruv, a ritualistic fence, makes everything within it a private space. The word eruv literally means “blending” in Hebrew.

The eruv dates back 3,000 years to the reign of King Solomon. The West LA eruv is one of the biggest in the world, and it covers about 100 square miles.

A maintenance and repair team oversee the eruv, including a four-person crew of checkers that are rabbis who specialize in the law surrounding the eruv, and a three- person maintenance crew that fixes the breaks.

About three quarters of the wall is made up of fencing and hillsides around the freeways. The other quarter is poles and heavy fishing wire. There are all sorts of reasons for breaks in the eruv, said Elliot Katzovitz, the board chair of the Los Angeles Community Eruv.

“Cars run into fencing in poles and take them down. Trees grow over the lines that need to now be cut back. When you're talking about the twine itself, it gets old and brittle and breaks. When there's construction along any of the streets that our eruv runs along, contractors will naturally take down whatever is in their way which includes our eruv lines,” Katzovitz said. “At times things that we're using disappear quite literally. So when they were widening the freeway, the 405, which is one of our boundaries, all of our fencing went away and it had to be recreated.”

He added that the eruv was only down for Shabbat three times in the 15 or so years since it began.

And in fact there were news stories then reporting on how Caltrans helped out and it raised questions about taxpayer expenditure on what is a religious practise.

The eruv is paid for by donations, and some synagogues actually build their fees into their membership dues.

There are eruvs all over the world. Just here in Southern California they exist in the West Valley, Orange County, Long Beach and at USC.

The eruv has come into community opposition in the past. About a decade ago there was an effort to create a coastal eruv in Santa Monica, Venice and Marina del Rey. But environmental activists worried that endangered birds would get caught in the wires, and that the poles used to prop up the lines would ruin their views of the beach. An activist group of three people sued the California Coastal Commission, entangling the project in costly environmental impact studies.

Now to someone who is not of the community, it may sound bizarre.

Na’amit Nagel, a modern Orthodox woman and resident of the Pico-Robertson neighborhood, relies on the eruv every week.

“At times I do feel silly. The ridiculous minutiae of it makes me ask, ‘What am I really doing? I’m a rational person.’ But other times I think there’s a lot of value in the laws and our traditions. And I think there's something fun about the creativity that's involved in working with tradition and modernity together and trying to meld these two worlds,” Nagel said.

So there’s this question: are we just looking for loopholes here? Are we ignoring the commandment for our own convenience?

“I am not one who believes that you please God by observing the eruv or offend God by not. But there are many Jews who do think that, who think that the minutiae on this level does impact, elate and irritate the creator of the world, and how you do it. That's not my approach but I'm one rabbi,” said Rabbi Adam Kligfeld of Temple Beth Am.

If the West LA eruv goes down, the folks who run the eruv update their Facebook page and send out an email every week, and you’re supposed to check it every week. Of course not everyone does. So they’ll also call synagogues and they’ll call their members.

Rabbi Yosef Kanefsky of B'nai David-Judea, a modern Orthodox congregation, said that if the eruv is not operable it creates a challenge for the communal and social character of Shabbat.

“It is because of the eruv that whole families can come to synagogue, bringing strollers and carrying children and what have you. It is because of the eruv that people are able to bring wine or challah or other food to one another's homes when they have a Friday night meal together or the Shabbat lunch together,” Kanefsky said. “And were it not for the eruv, it would be impossible to transport any object at all.”

Some ultra-Orthodox do not use the eruv, including Doniel Berry, a Hasidic Jew who belongs to the Chabad-Lubavitch movement, because of the possibility that the eruv may go down on Shabbat.

“So for that extra precaution I am not alone in the community that we choose not to use it, basically just out of an extra layer of protection that in the event it should go down, we won't accidentally be transgressing the prohibition of carrying on the Sabbath,” Berry said.

There are other ways Orthodox Jews get around the laws of Shabbat. For example, what if you’re in an area without an eruv but you need to carry your child? You are allowed to carry three steps without the eruv, so if the child can walk you put them down, let them walk one step, then pick them up again. 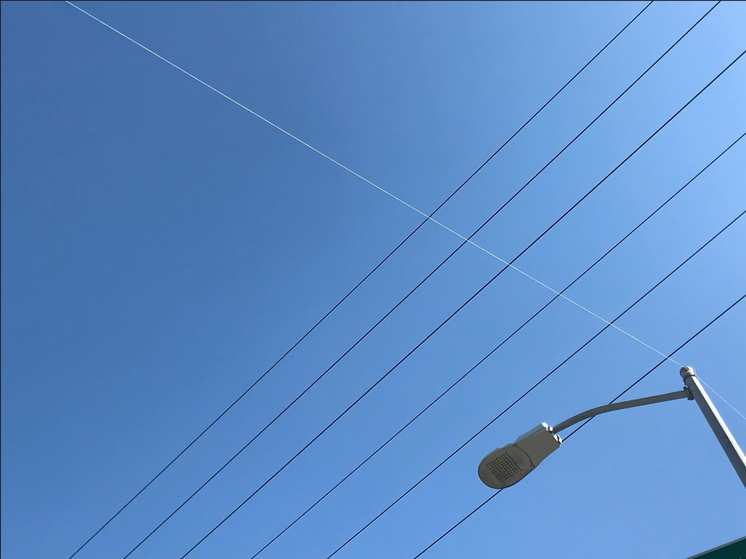 “There's a way around functioning without an eruv, but it’s hell,” Katzovitz said. The fishing line that makes up part of the West LA eruv. Photo credit: Frances Anderton.