Johnson Fain built a “boat within a boat” at the former Crystal Cathedral, shading and diffusing the once vivid sunlight. Photo by Frances Anderton/KCRW

Famed televangelist Robert Schuller got his start preaching at a drive-in theatre and went on to build himself an all-glass church in Garden Grove designed by the architect Philip Johnson.

Dubbed the Crystal Cathedral, the diamond-shaped structure became Orange County’s most celebrated religious building. But now it reopens its doors to a different branch of Christianity -- with a boldly redesigned, shaded interior that may be heresy to fans of the icon of 1970s suburban kitsch. 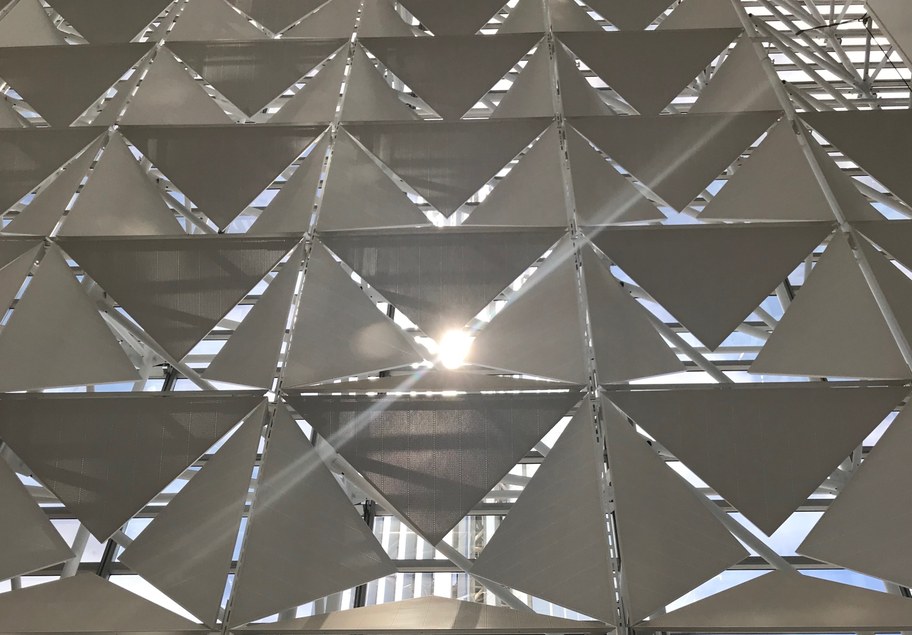 At his peak Schuller reached millions through its weekly Hour of Power, but his ministry went bankrupt in 2010, and he died in 2015. Crystal Cathedral was sold to the Roman Catholic Diocese of Orange and is now Christ Cathedral.

The nine-story building had to be reconfigured for a different liturgy, for less TV and less sun.

“Catholic liturgy depends on this play of light and this focus of attention on our liturgical elements. So we knew that we needed to do something to focus the light -- and to reduce the glare, to be honest with you,” said Lesa Truxaw, director of the Office for Worship for the Diocese of Orange. 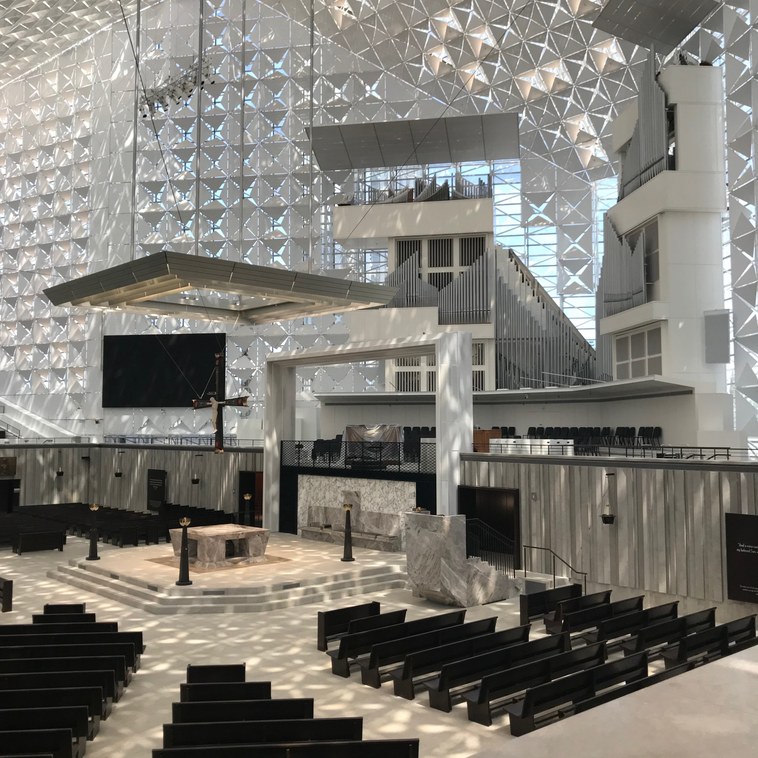 Dark pews and an altar made of Verona marble add to the sense that Christ Cathedral is more sober than its predecessor. Photo by Frances Anderton/KCRW

Johnson Fain came up with an extremely bold solution: a screen of 11,000 steel powder-coated plastic-and-fabric squares, bifurcated into triangles that are peeled back -- at different angles according to the passage of the sun -- to let in slivers of light.

The screen is attached to the space frame that supports the glass walls of the original building. A “boat within a boat” is how principal architect Scott Johnson (no relation to Philip Johnson) describes the strategy. 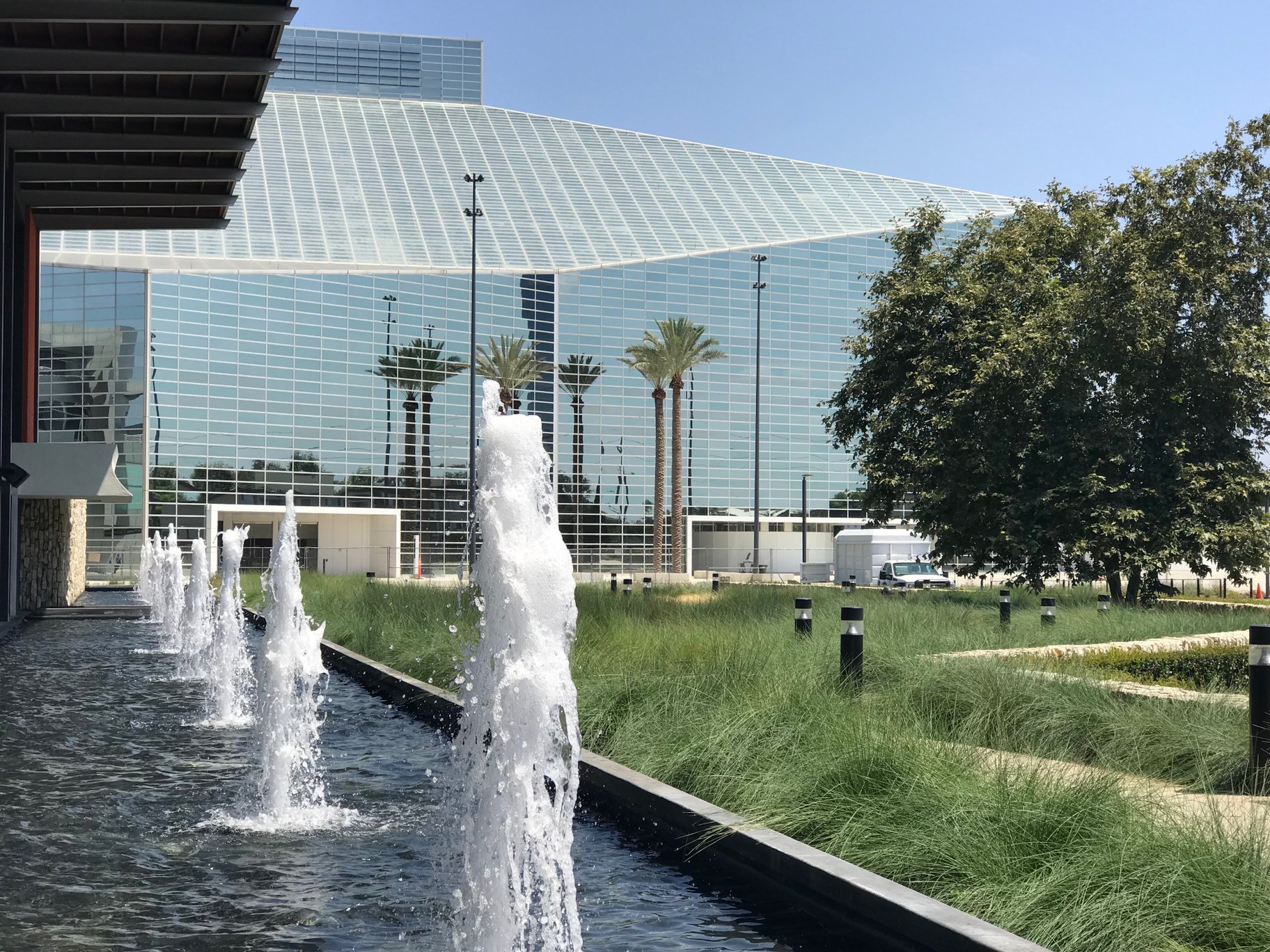 “The original all-glass building was really a function of Robert Schuller’s beginnings as an evangelical minister outside and he wanted to be able to see everything outside,” he said, adding, “Now when we think of a Roman Catholic cathedral we think of these stone historic buildings and they’re dark with streaming points of light.”

Now the light that comes through the triangles “creates a pattern on the floor of stars and at other times crosses,” Truxaw said, adding that the symbolic relevance is that “the light shines off the quatrefoils just as we're supposed to reflect the light of Christ to the world.” 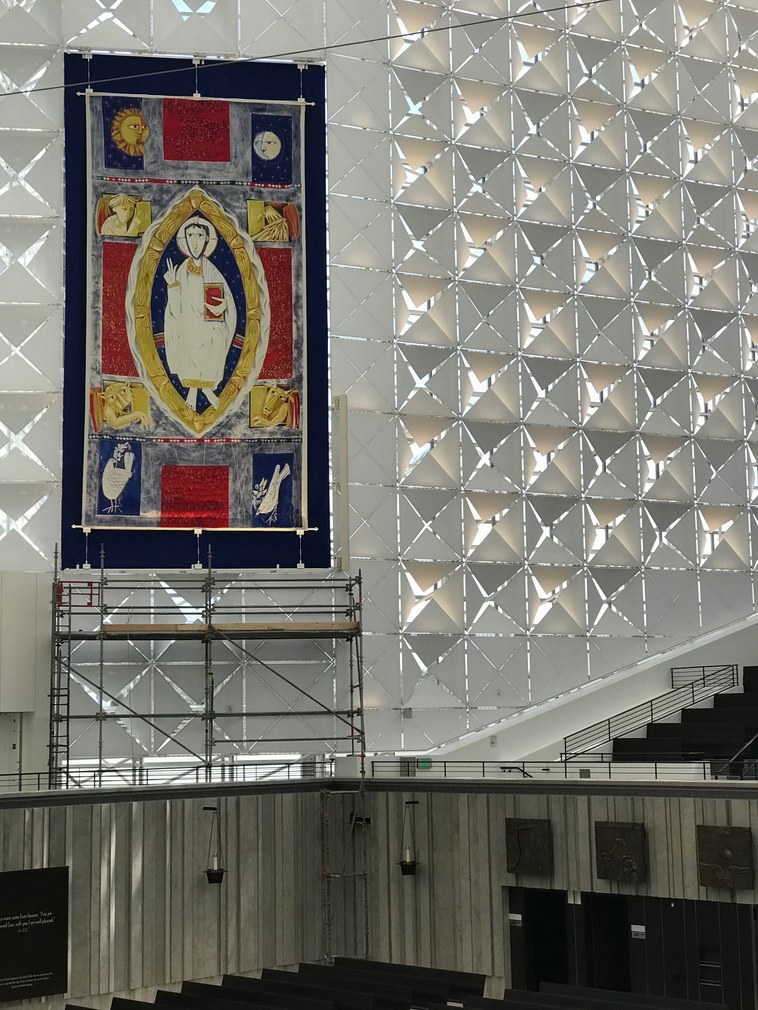 Brother Martin Erspamer, a monk of Saint Meinrad Archabbey, designed the tapestry of the Pantocrator, or Christ Seated in Glory as the Lord of Creation. It was fabricated in Belgium. Photo by Frances Anderton/KCRW

Scott Johnson actually worked for Philip Johnson in the 1970s and remembers his colleagues working on cathedral. He says he and his team are very aware of the iconic status of the design, and made sure to leave its reflective glass exterior untouched.

On the inside is where they made the big changes. In addition to the light-diffusing screen they reconfigured the interior to meet the processional needs of the Catholic mass, deepened the tones of the pews, installed a large marble altar as well as cathedra, ambo, and baptismal font. 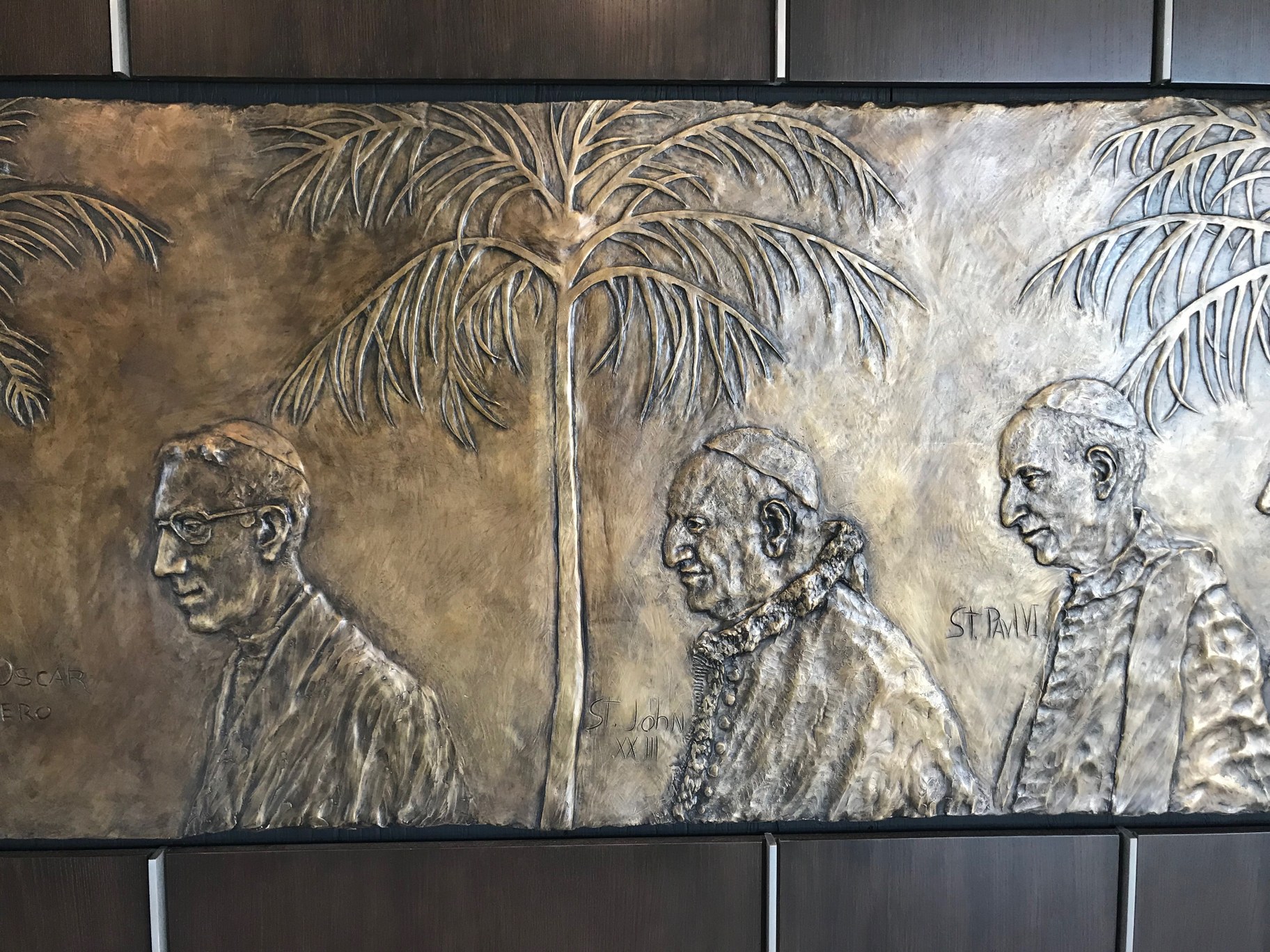 Pablo Eduardo, a Bolivian-born sculptor, designed this relief on the wall of the Narthex (entrance to the cathedral) as well as 14 Stations of the Cross, and the Festal Doors. Photo by Frances Anderton/KCRW

The archdiocese also added artifacts, including a tapestry of Christ, brass reliefs and a reliquary under the altar, containing the bones of “martyrs that showcase the diversity of our dioceses,” Truxaw explains. The have relics of saints from Korea, Vietnam and Mexico, as well as bones of the founding father of the Catholic Church in California, Junipero Serra. 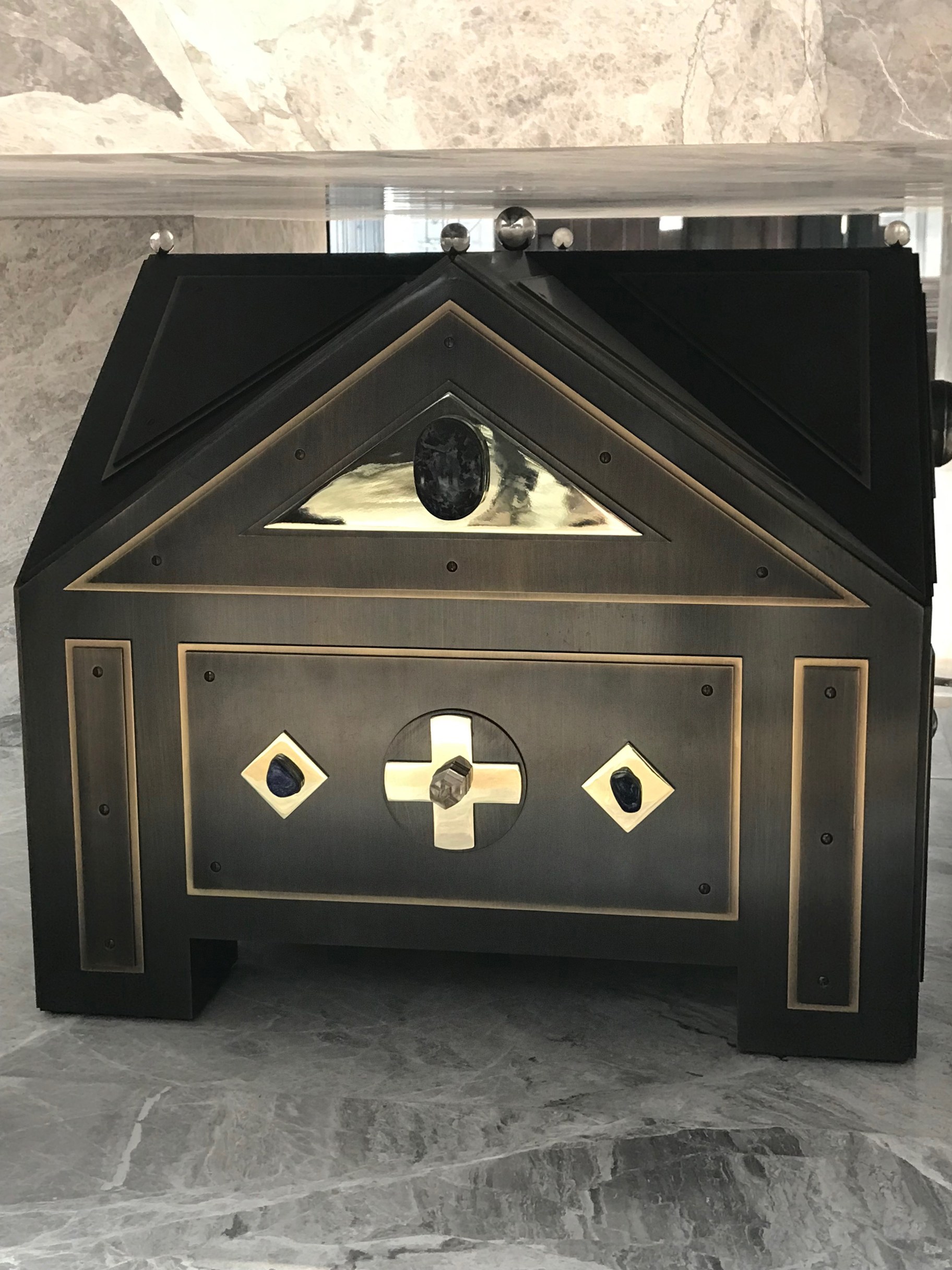 The reliquary under the marble altar contains the bones of martyrs from all corners of the Catholic world. Photo by Frances Anderton/KCRW

Admirers of the original building, or those who love it as an exemplar of 1970s suburban kitsch, might be shocked at the retrofit.

After all, beyond the reduction of sunlight, the transformation of the cathedral represents a fundamental turning inward from Schuller and Philip Johnson's original scheme. The building, with its reflective, corporate modern exterior, was designed to accommodate not only TV-watchers but also parishioners who participated without leaving their automobiles. 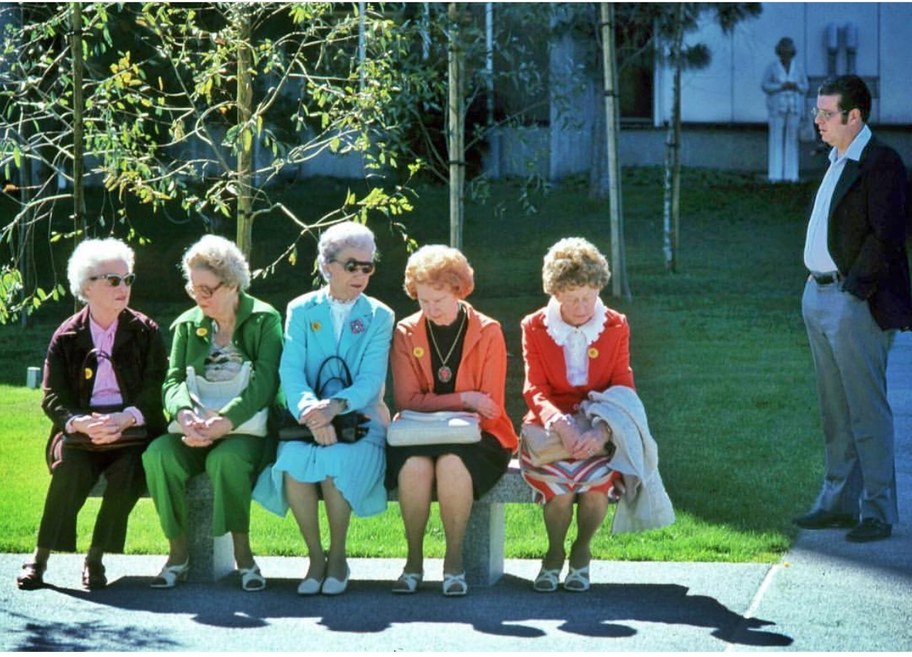 The photographer Tim Street-Porter recalls how Schuller "preached to the indoor congregants, then the big glass doors opened; he turned around to face the giant car park, and preached again to the hundreds of folks outside in their cars, the sound piped in as at at a drive in movie theater."

So what might the late Philip Johnson think of the redesign?

“Philip was such a literate maverick,” responds Scott Johnson. “He was a kind of brilliant polymath, complex personality and he was always interested in change. So I think he'd acknowledge it as a positive change and I think he'd be just fine with it.”

Christ Cathedral will be dedicated on July 17th.