Views of the Hollyhock House, designed by Frank Lloyd Wright for theater producer and oil heiress Aline Barnsall. The house was named as one of eight Wright-designed structures to the list of UNESCO World Heritage Sites. Photo credit: Brigid Kelly

On Sunday, July 7, 2019, Hollyhock House, Frank Lloyd Wright’s first house in Southern California, was declared a UNESCO World Heritage Site.  It and seven other structures were collectively inscribed as a serial nomination entitled The 20th-Century Architecture of Frank Lloyd Wright. This makes Hollyhock House one of the most important cultural structures on the planet.

Brigid Kelly is a radio reporter who happens also to be a docent at Hollyhock house. She was giving tours when the UNESCO listing news broke. She describes the house, reaction to the news and what’s ahead for Hollyhock House as the sleepy little museum atop a hill in Los Feliz anticipates a big jump in visitors. 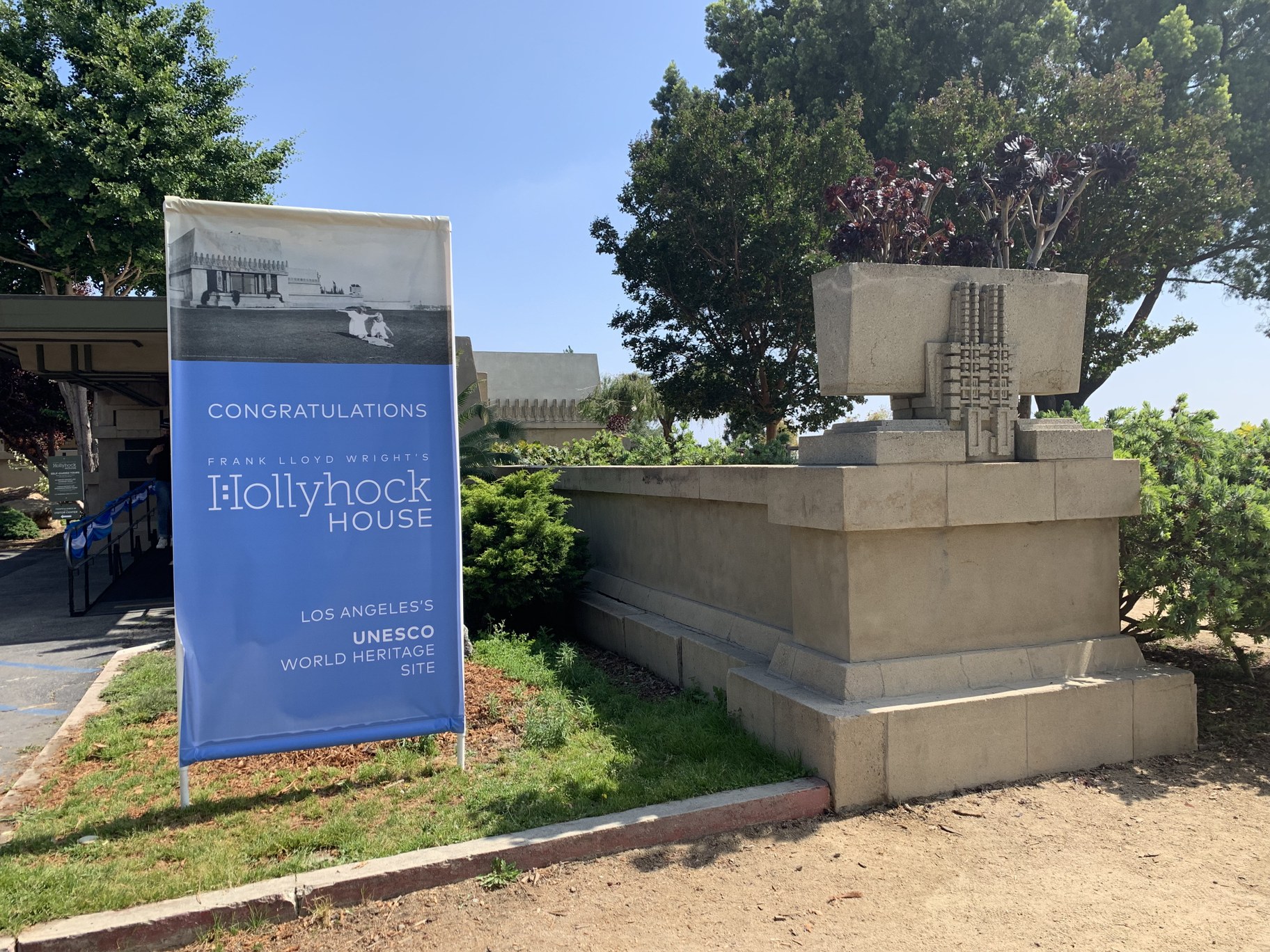 Back in 1919, Aline Barnsdall, a theater producer and oil heiress, hired Frank Lloyd Wright to design a theatrical arts complex on Olive Hill, a 36-acre plot that stretched from Hollywood to Sunset Boulevard and Vermont to Edgemont Avenue. The campus would feature a large avant-garde theater, apartments for artists and actors, a movie theater and multiple other buildings to support production. Aline’s home, Hollyhock House, was on top of the hill, where she would be able to monitor projects.  But after a few structures were built and Wright wasn’t able to give her construction drawings for the theater, Aline pulled the plug on the rest of the complex. Some considered the venture a failure. She donated the house and hilltop to the city in 1927. 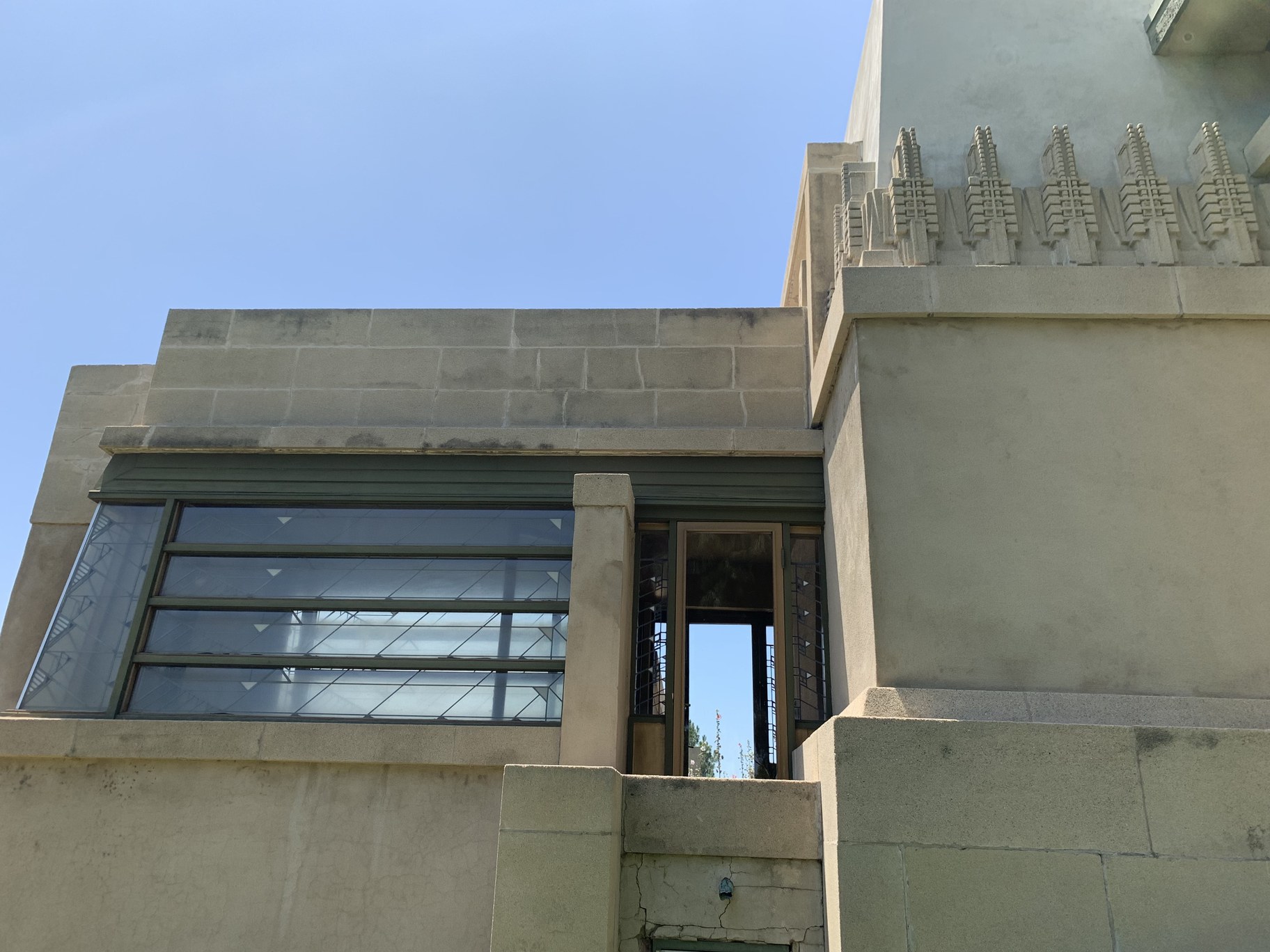 If you’ve never been to Hollyhock House, it feels like you’re walking into an ancient temple, past 250-pound concrete doors into a low ceiled entrance hall where, if you’re on a self-guided tour, you’ll pick your own adventure. It’s impossible to convey all the details but you’ll see Wright incorporating his interpretation of Barnsdall’s favorite flower, the hollyhock, into nearly everything: furniture, carpets, planters, laylights and art glass windows. Just outside, gardens are full of the flower, demanding comparison. The house’s open floor plan offers access to the outdoors from nearly every room. The fireplace, made of cast concrete, has a moat in front of it and was part of a larger feature where water flowed from a reflecting pool on one side of the house to the other. The courtyard has stairs leading to rooftop terraces with views of Griffith Park and on a clear day, to the ocean. It’s definitely not an example of Wright’s prairie architecture.

Back to the World Heritage inscription.

It’s not easy to get recognized as one of the most important cultural structures in the world. Jeffrey Herr, curator of Hollyhock House, has been trying to drag the site out of obscurity since 2005. While the house was declared a National Historic Landmark in 2007, that was just one step towards what would be a 14-year attempt to gain world recognition.

“I don’t want to be too crass, but you know, it’s kind of like winning the Lifetime Achievement Best Picture Oscar award,” Herr said.

Important criteria the World Heritage Committee uses to determine if sites are worth considering for conscription is “Outstanding Universal Value”. According to Herr, the phrase means “the site is significant in terms of humanity, and that it has had an influence or an impact that is felt globally, in one way or another.”

Herr said each of the eight properties in the serial nomination had to contribute something unique to the UNESCO application that would leave the joint proposal vulnerable if that property was not included. 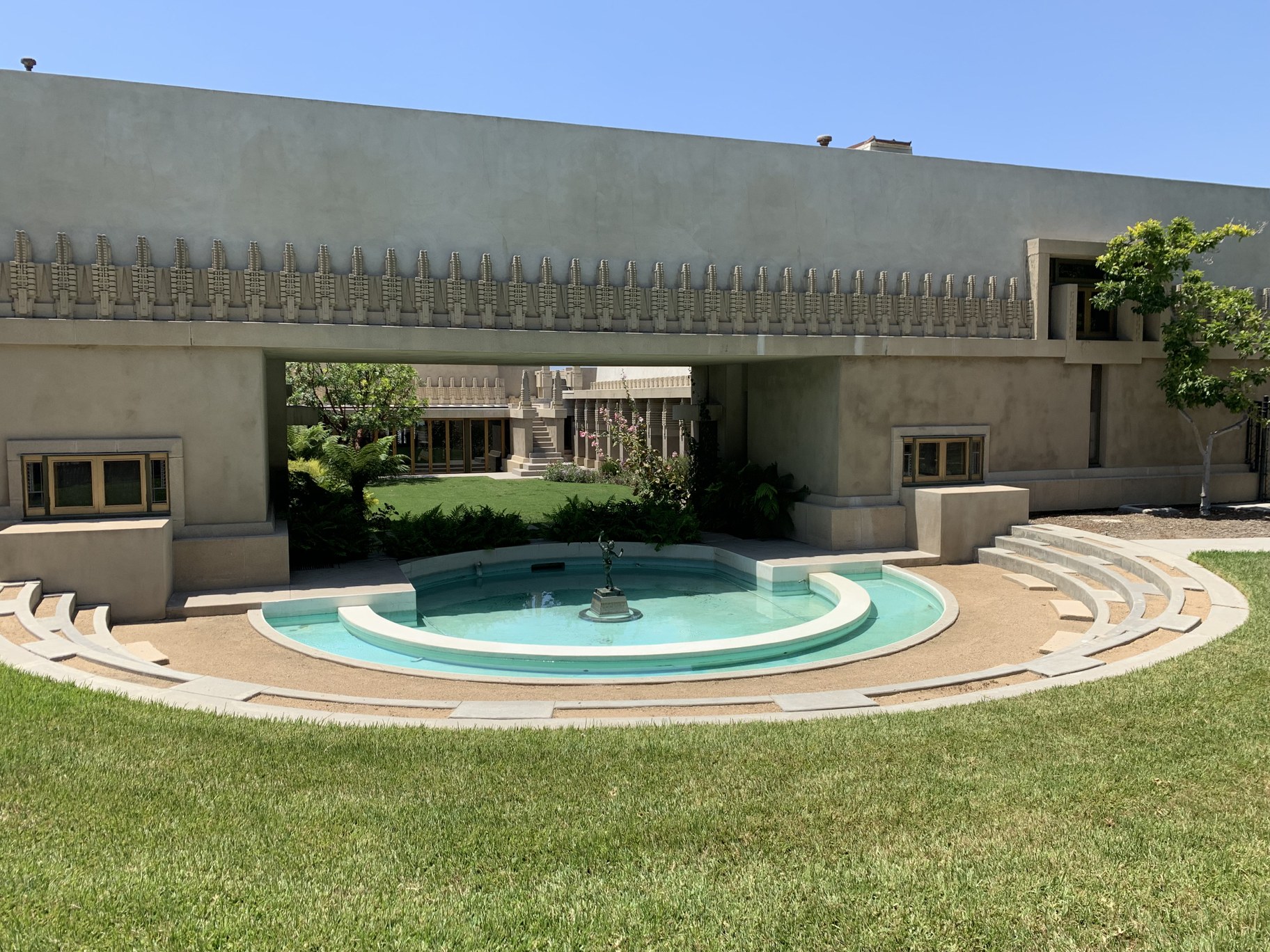 Hollyhock House is unique amongst the other buildings because it is the first house of Wright’s second period. He pivots from his Prairie Style and looks to pre-hispanic and Japanese architecture to find elements that would best serve the modern Californian. It’s Wright's first courtyard house which includes an open floor plan with fluid interaction between indoor and outdoor living spaces. The exterior wears a band of cast concrete geometric-based hollyhocks. It announces a new genus of architecture.

I was on Olive Hill when visitors learned of the World Heritage news on Sunday, July 7. Some were there because they’d read the announcement in the news and wanted to be the first of their friends to get in. Some had no idea who Frank Lloyd Wright was or the significance of the house. They just wanted to see inside the otherworldly structure that was drawing so many other people’s attention. 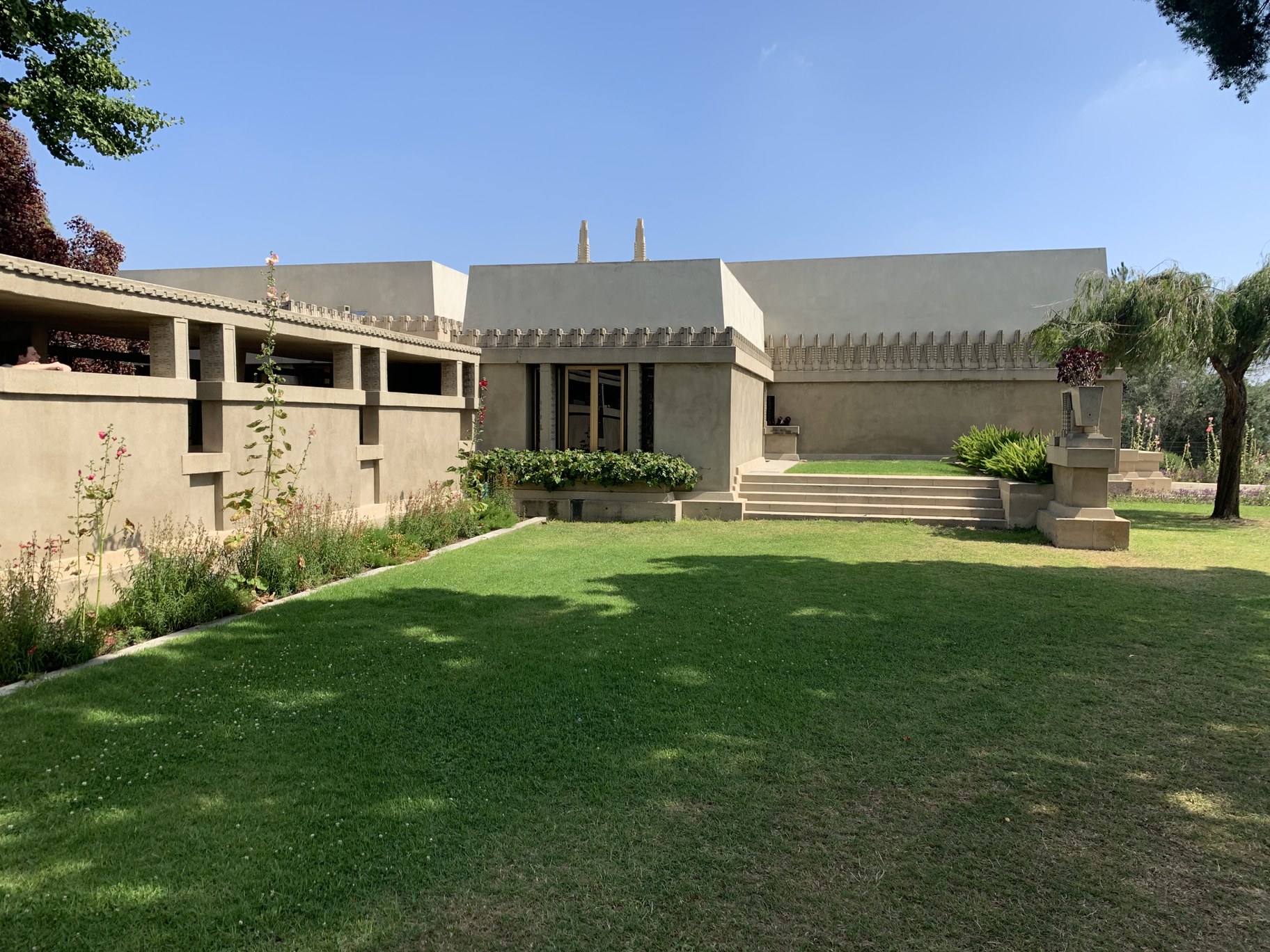 In the past, on an especially good Saturday or Sunday the museum would sell 200 admission tickets. Over the winter holidays, they might get a maximum of 350 entrances. Saturday, July 13, one week after the World Heritage announcement, 391 people bought tickets. While those statistics are only from one day, the approximate 11% increase over the house’s high season numbers, sound a warning. With capacity limited to 30 people inside at one time, many visitors will wait in line. And, tour buses haven’t started coming.

Since the house shares the hilltop with Los Angeles Municipal Art Gallery, Gallery Theater and Junior Arts Center, lots of people will be vying for the same parking spaces and restrooms. It's also likely traffic circulation will need to be addressed along with yet unimagined challenges. 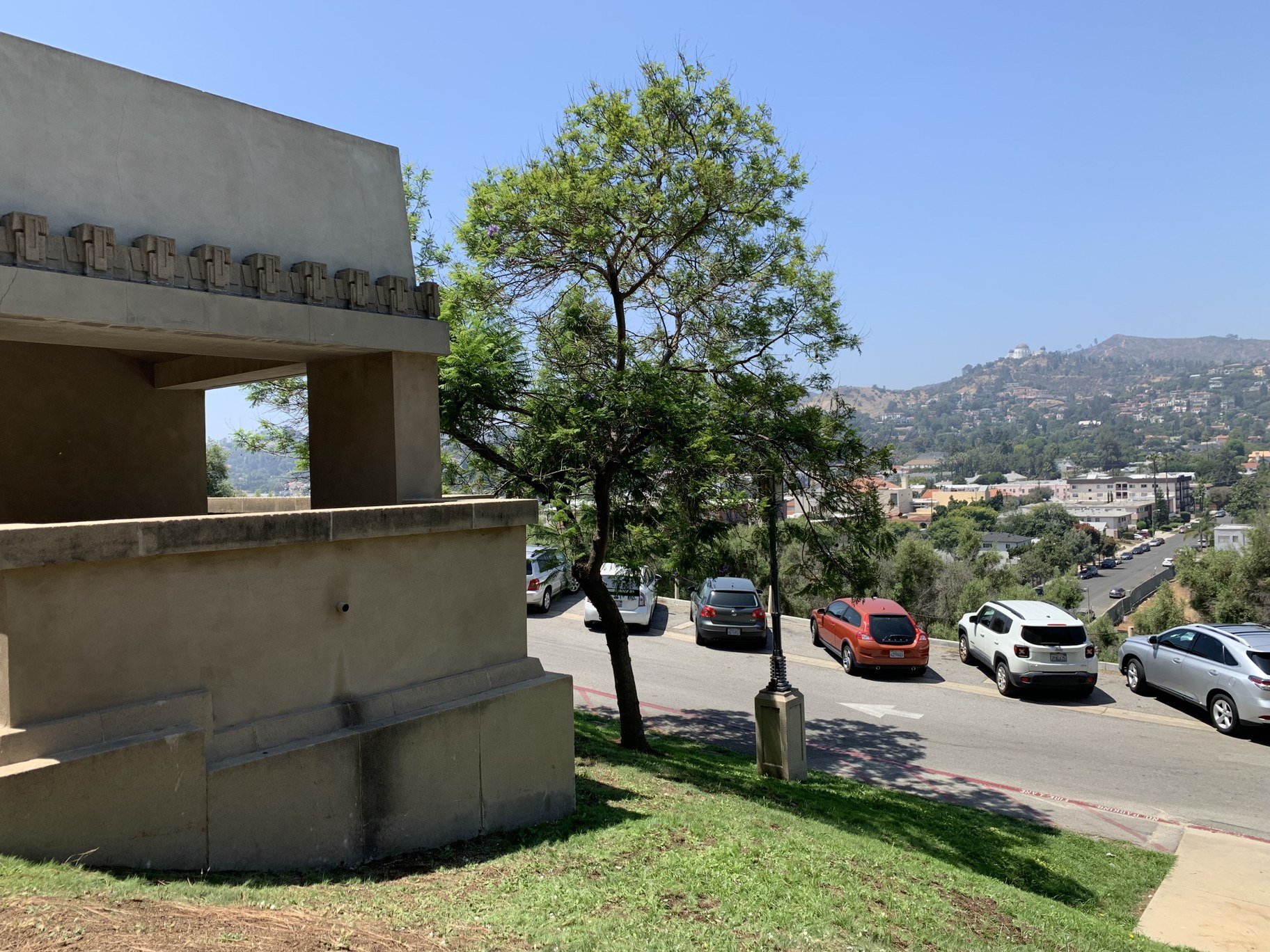 But Herr believes the kinks will get worked out and the benefits will start rolling in. He cited the San Antonio Missions, which received their World Heritage Status in 2015. Impact studies project millions of dollars of additional economic activity, increased employment and additional local hotel tax revenue as a result of their inscription. Herr guesses Hollyhock House’s World Heritage status could bring much of the same. He also hopes it makes the house one of the international iconic symbols of Los Angeles.

If it does become an icon it seems effort should be made to divvy up the credit. Herr agrees.

“I think the thing that we tend to do is to focus on Frank Lloyd Wright because he is sort of the marquee name. But Aline Barnsdall was such an extraordinary person herself. And it took her vision to be the impetus for Frank Lloyd Wright to do the work he did at Hollyhock House. And if he hadn't had that vision and worked through these ideas at Hollyhock House, who knows what might not have happened later,” Herr said. “Because one thing leads to another.” 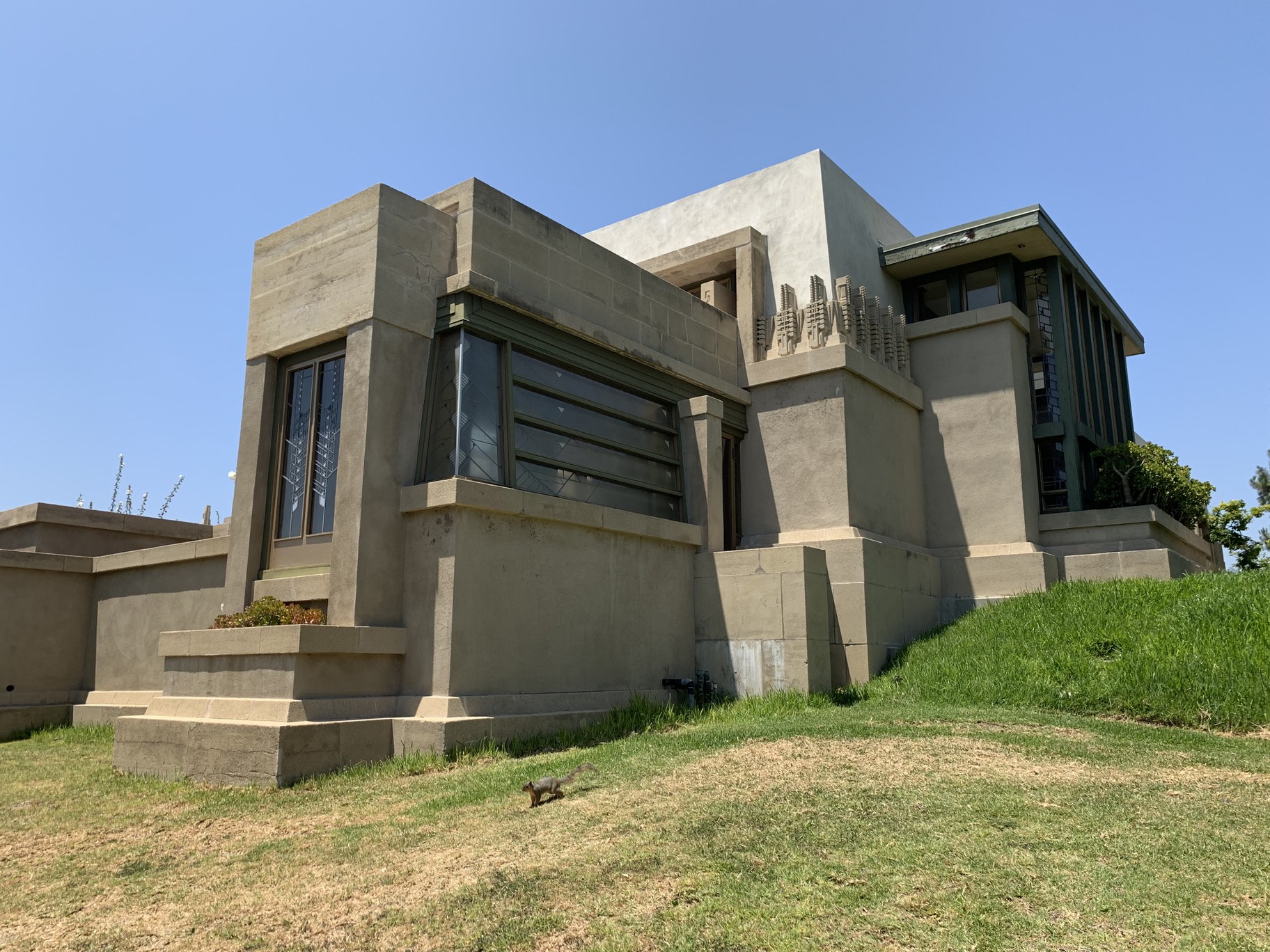 Despite the wider project being canceled nearly 100 years ago, Frank Lloyd Wright knew the house had what would eventually be considered outstanding universal value. He famously wrote Aline Barnsdall after Hollyhock House was finished:

--Text and photos by Brigid Kelly