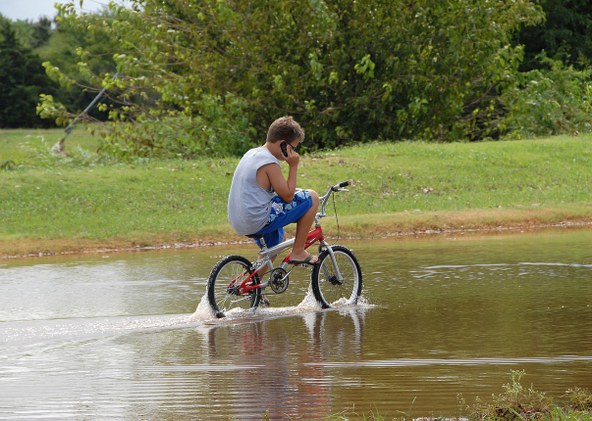 Brandon Jernigan talks on a cell phone while riding his bike through flood waters.
Photo by Marvin Nauman/FEMA

This morning at Apple's new corporate campus, CEO Tim Cook and colleagues announced a reinvention of their retail stores, transforming them into town squares, as well as the new iPhone X, and a big change to the iWatch: the addition of cellular.

But what's the point of a fancy phone if you can't make a phone call? His announcement comes on a day when much of the state of Florida and the Caribbean are without power.

Nancy Klingener with NPR member station WLRN wrote that in Key West, "It's like we've been transported to the pre-digital pre-cellphone era. In fact, it's the pre-telephone era for most of us."

As our lives become increasingly dependent on digital devices, what happens when the juice stops flowing? And how are cell phone companies making sure the lines of communication stay open even when the cell phone towers take a hit?