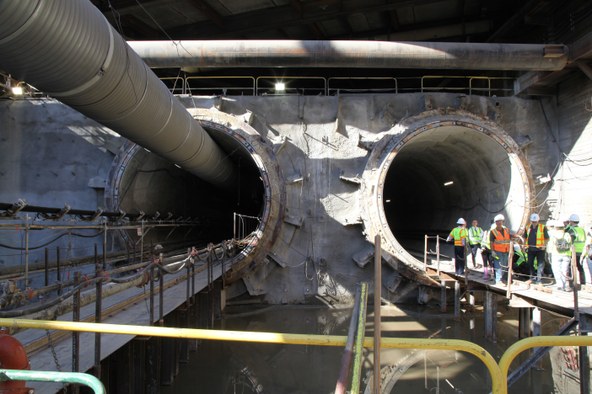 There is a tunnel currently under construction 60 feet below Little Tokyo. It's an S-shaped tube and it's finished in curving concrete, parallelogram-shaped panels that are so elegantly arranged that Los Angeles Mayor Eric Garcetti called it a "sexy tunnel."

It's called the Downtown Regional Connector and it will link the Expo, Blue and Gold lines.

The tube is being created by a computer controlled machine that drills through the earth and then positions concrete rings in five foot segments. And all this is being done in a way that the project manager says creates very little ground movement.

But this is not the only tunnel project in LA. Also in the pipeline are the Crenshaw/LAX Line and two segments of the Purple line (running from downtown west towards Santa Monica).

Meanwhile, Elon Musk and his Boring Company are busy boring his own tunnel.

Musk has complained loudly about his own LA commute and has suggested various concepts for speeding it up. He once told DnA he wanted to put another deck over the 405. Now he is aiming for a "3D" tunnel network in which vehicles would be lowered down onto rails on an electric skate that would then shoot underground at about 130 miles per hour.

"There's no real limit to how many levels of tunnel you can have," Musk explained at a TED Talks event. "You can go much further deep than you can go up... so you can alleviate any arbitrary level of urban congestion with a 3-D tunnel network."

Musk recently tweeted out an image of a stretch of tunnel under the parking lot of his company SpaceX in the city of Hawthorne.

He says it is 500 feet and should be two miles long in three or four months; and adds that it will hopefully stretch the whole 405 north-south corridor from LAX to the 101 in a year or so.

Is it a coincidence that if built -- and it's a big if since this project would involve multiple cities and jurisdictions -- it would run conveniently near his own home in Bel Air?

DnA talks to the mayor and a city engineer about LA's boom in tunnel building.