“What’s the closest I’ll ever come to drinking a tree?” An answer to this question isn’t what Jonathan Gold expected to find at Narisawa in Tokyo. Alas, the LA Times food critic found himself sipping from a wooden jigger filled with oak-flavored water just before dining on what Chef Yoshihiro Narisawa calls “Satoyama Scenery,” a plate made from raw wood, topped with moss-like garnishes, accompanied by small speakers playing audio from the nearby forest. Before this innovative chef made his way to California for the LA Food Bowl, Gold thought he should fly to Tokyo and try Narisawa’s two-Michelin-starred restaurant. Gold was also moved by the exquisitely aged fish at Sushi Kimura, an eight-table sushi house south of Tokyo. 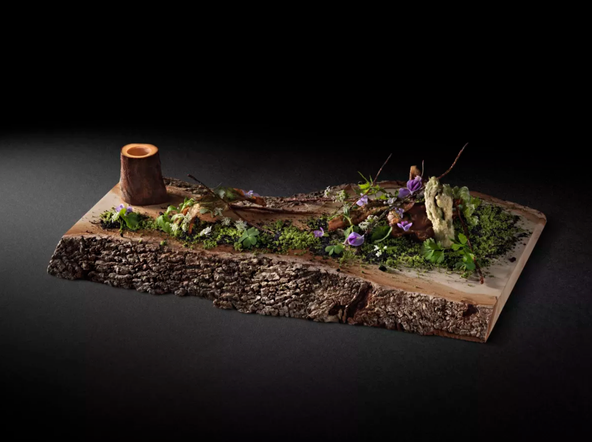 “Satoyama Scenery” is one of the Japanese mountainside-inspired dishes
available at Yoshihiro Narisawa’s Toyko restaurant. Photo courtesy of Narisawa.