Artist Stacy Michelson says understanding where food comes from, how they vary, and how to prepare them will inspire you to be a better shopper and eater.
Illustrations by Stacy Michelson.

Stacy Michelson is known for whimsical and colorful drawings that give personality to food. Leafy greens wear lipstick or eyeglasses, corn on the cob shows off a crown.

A few years ago, she decided to illustrate every episode of Good Food, and she designed the Good Food tote bag and blanket.

A veteran of the restaurant and music industries, the Orange County-born artist has published many of her illustrations in “Eat This Book: Knowledge to Feed Your Appetite and Inspire Your Next Meal.” The book includes fun facts about where certain foods come from, and how you can prepare and eat them.

Michelson talks to Good Food about her artistic inspirations, growing up in an agricultural family, and the curious history of Thousand Island dressing. 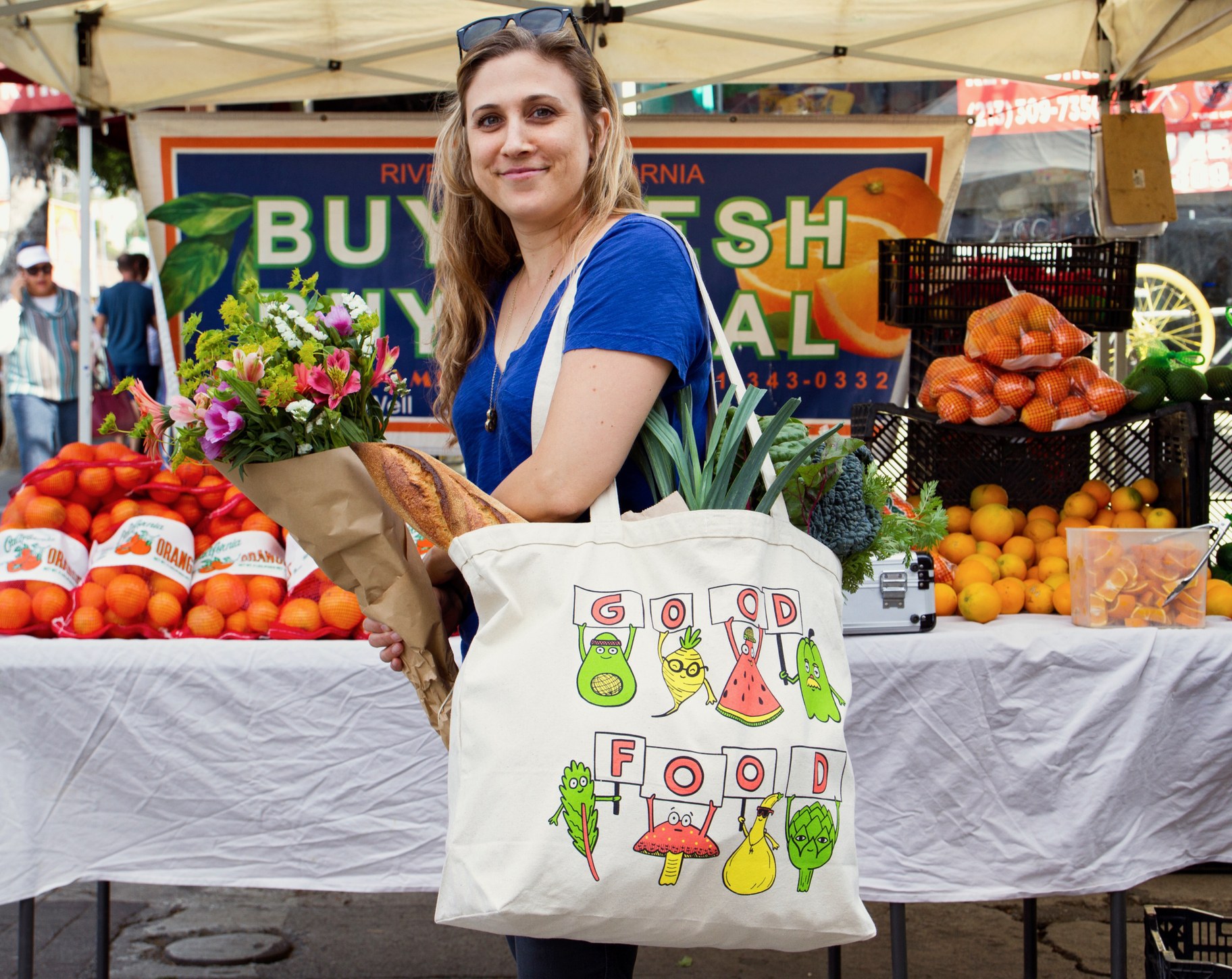 KCRW: When did you start drawing?

Stacy Michelson: “The thing I remember is winning the bookmark contest in first grade. And my mom framed that and put that on the wall. So that's like the first drawing memory, but I'm sure it was a little bit before that.”

Have you used drawing as your major focus all the way through your life?

“Definitely. I think from excelling in those parts of school … [to] when I started working at restaurants, I was always the person who would draw the special signs, the menu boards, or the kids menus. And then for years, when I was in bands, I would always design and screenprint our T-shirts and design our CDs and flyers. So it's always just been this thing on the side to help sell whatever I'm doing or whatever job I'm working in.”

Can you describe your style?

“I like really bright, colorful, fun, energetic, kind of cartoon style. But also, especially with this book, I love to take a familiar graphic, label, or bottle and kind of make it my own with some with some funny twists on the title, or just a way to throw information on something that maybe will catch your attention.” 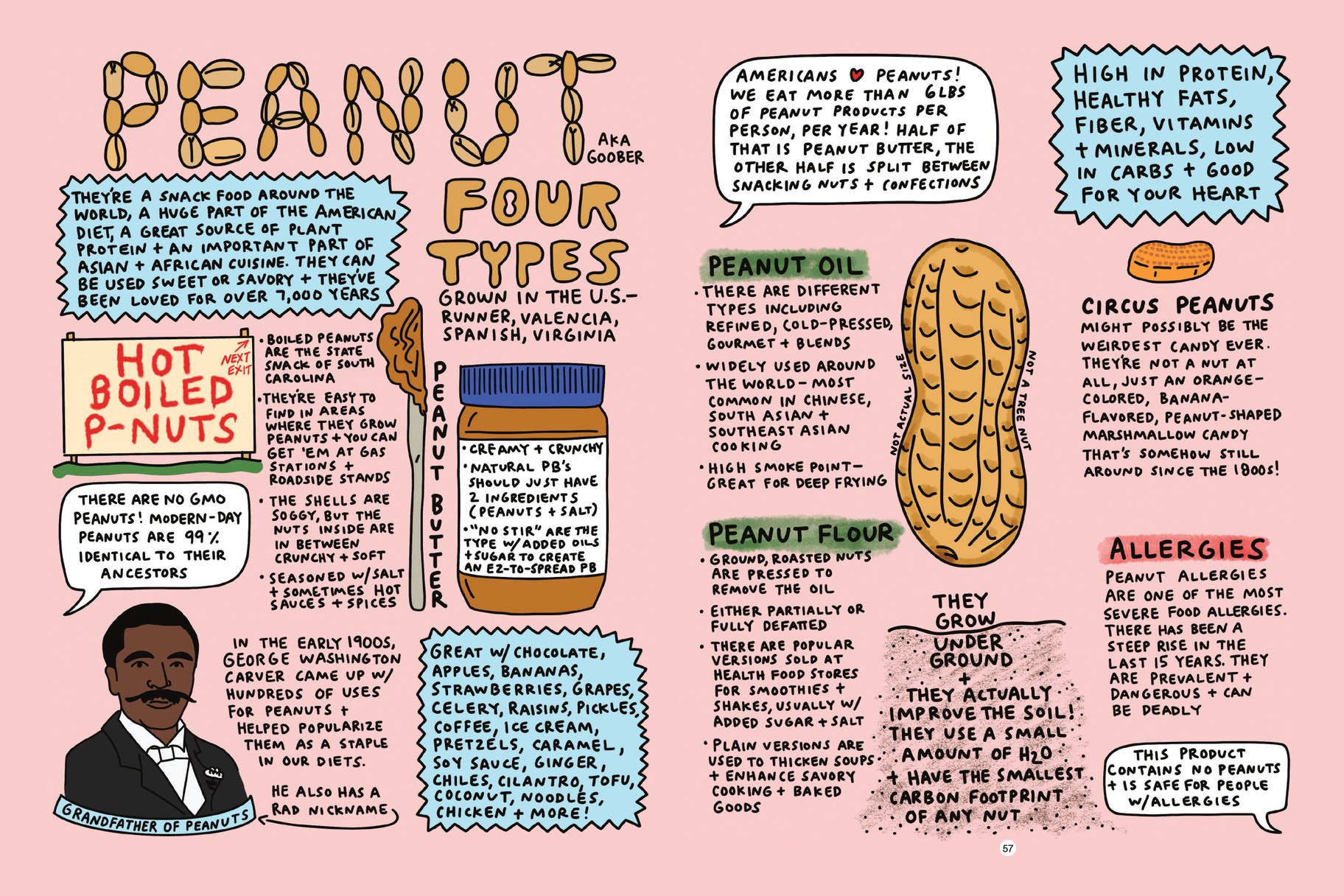 Did you know there are no GMO peanuts? Today’s legumes are 99% identical to their ancestors — just another fun food fact by artist Stacy Michelson. Illustration by Stacy Michelson.

Both your dad and your grandfather were in the produce business. That must have really informed your relationship with food, right?

“For sure. I grew up in Orange County, but they both worked in LA. They were buyers and did exporting for citrus. I never knew what my dad did, so I would always just tell people at school ... ‘My dad drives around, he tastes oranges all day. And then he sells them to companies in Japan. And that's why we always have fresh squeezed orange juice when you spend the night.’

It was this funny thing, but because he worked in the produce market in downtown LA, he was friends with everybody else who didn't work in citrus. So we'd have everything at the house. He’d be bringing home stuff that I think a lot of my friends tried for the first time at my house … So that was kind of a normal thing, to just have all these different fresh fruits and vegetables around.” 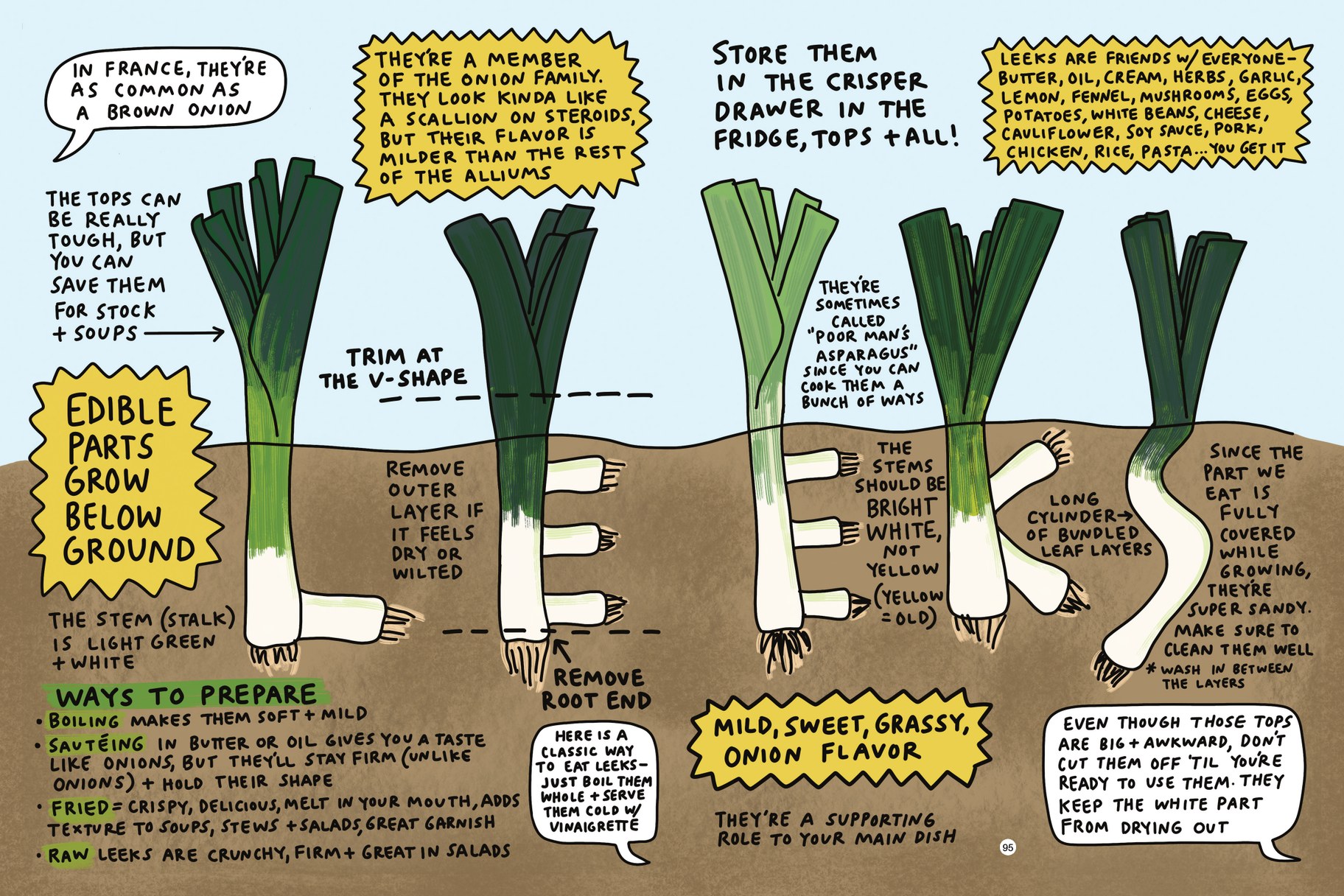 Because they have a variety of uses, leeks are also known as “the poor man’s asparagus.” Stacy Michelson’s love of drawing stems from winning the bookmark contest in grade school. Illustration by Stacy Michelson.

The book is almost like an encyclopedia or a food reference book. You had to make selections about what ingredients or products you were going to bring to life in the pages. How did you decide which foods made the cut?

“Before it was an idea for a book, this was an Instagram project. And I thought, ‘Oh, I'll do 100 of these, and it'll be so fun. And I can post them. And it'll give me an opportunity to explore ingredients that I like.’ But I quickly realized that people were sending me requests like, ‘Will you do liquid smoke?’ ‘Will you do noodles?’ ‘Will you do MSG?” It just became this thing.

So I have personal favorites in the book, and then I have things that I know. Things that people wanted to learn more about. And then I had things from working in the restaurant [industry]. For years, I worked in health food restaurants, and I worked in fancy restaurants in LA, and I feel like I had this knowledge of what confused people. Like what I thought I could, as a server back in the day, just easily explain to somebody. … So I thought if I can explain it in a drawing, it'll be so easy. Then people will just be food smart, and it'll be this fun thing that they saw.

And then also, things like chocolate, where does it come from? It comes from cacao. And it's a fruit. And just learning about those kinds of things in a deep dive, exploring the things that you don't just see on the shelf, like the original version of it.” 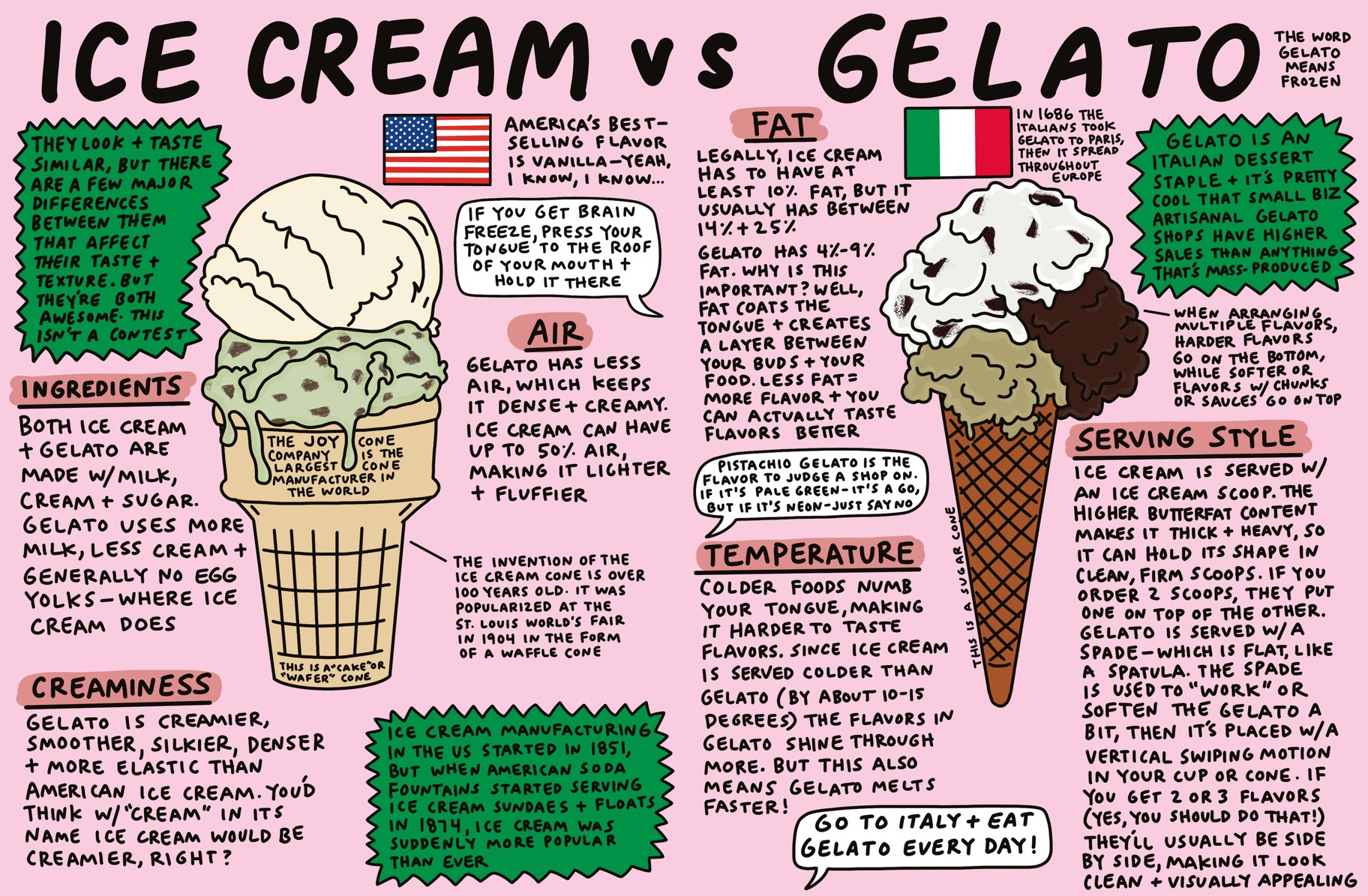 The illustrations are accompanied by facts and nuggets of information that many of us have never considered. Like Thousand Island dressing, for instance. What are its global counterparts? And what's its origin story?

“When I grew up, that was my favorite dressing. That's like what you ordered when you went to the diner or the coffee shop. And it was always in the house as well. And I never really thought about that name. … Have you ever thought about like, where does that name come from?”

I always thought it came from the tiny little pieces of pickle that were sliced up in it.

“Who knows? I was a major food detective with that one. There are so many stories online, and everybody has all these theories of where it came from them. The one that seems to be the origin story takes place in New York. So there's these things that are actually called the Thousand Islands. And they have their own museum.

And there's this story where this woman, Sophia LaLonde, had this little restaurant, and her husband would fish and take people out fishing. And when they bring back the fish, she'd make the sauce and put it on it. And it just became this dressing. And then everybody wanted it. So it's named after the Thousand Islands.

But then there's this thing with the Waldorf Astoria, [where] they tried to claim it and put it on their hotel restaurant menu. So all that kind of stuff. It's so fun to explore those. And then also, that Thousand Islands Museum, they have, supposedly, this little piece of paper that has the original recipe on it. That's kind of cool, right? So I thought, ‘Oh, I can draw that and put that in the book.’ And then just around the world, there are so many things that are basically mayonnaise and ketchup combined that become that sauce, and then that's always called ‘secret sauce’ on menus.” 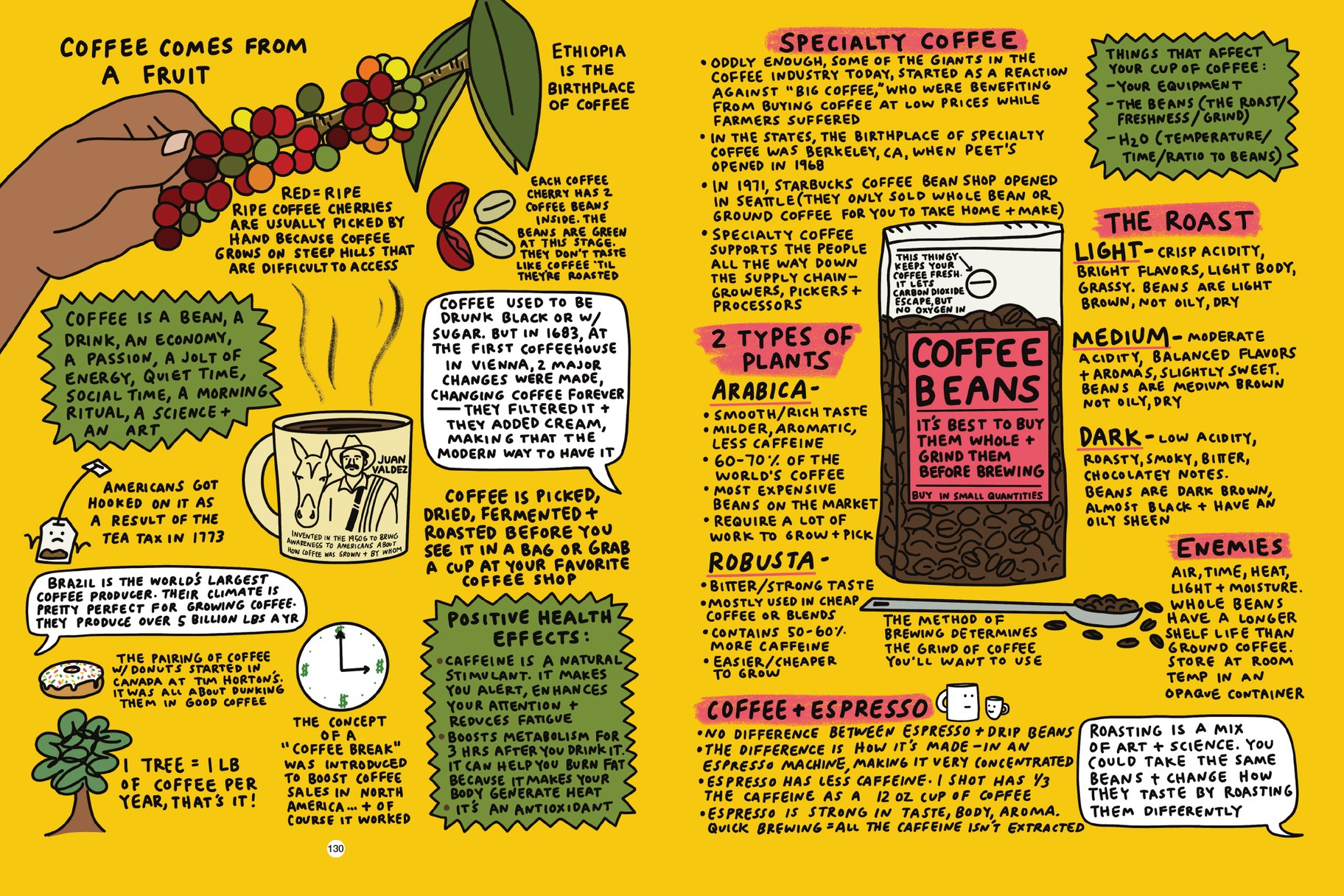 Researching coffee beans, Stacy Michelson discovered that the character of Juan Valdez was created in the 1950s to enlighten Americans about where their coffee comes from. Illustration by Stacy Michelson.

In the book you have a beautiful illustration of fennel. For me, the greatest part of this illustration is the little bubble that says ‘eat it all.’ Every part of the plant is edible, from the flowers to the crown. To me, this is a beautiful example of what the book does. You look at the way it looks visually. You talk about the flavor, the aroma, the seeds.

Cold brew is another one that caught my eye, because while it's not a cookbook per se, you do give us so much information that we can in fact use in the kitchen. And you really let it be known that no, not all iced coffee is cold brew.

“Cold brew can also be a hot coffee. It's the preparation. People have been asking me online when I've been promoting it like, ‘Are there recipes? It is a cookbook?’ And I think the real answer is no, but there are so many things in here [that will] help you be a better eater. It'll help you be a better cook. I think it'll help you be a better shopper when you're out at the market. Just knowing how to pick certain things, or what to look for, or [what to do] when you come home. I have a lot of little things like, ‘Hey, when you come home, throw your garlic in a brown paper bag.’ Just things that I think will help people overall be better in the kitchen.” 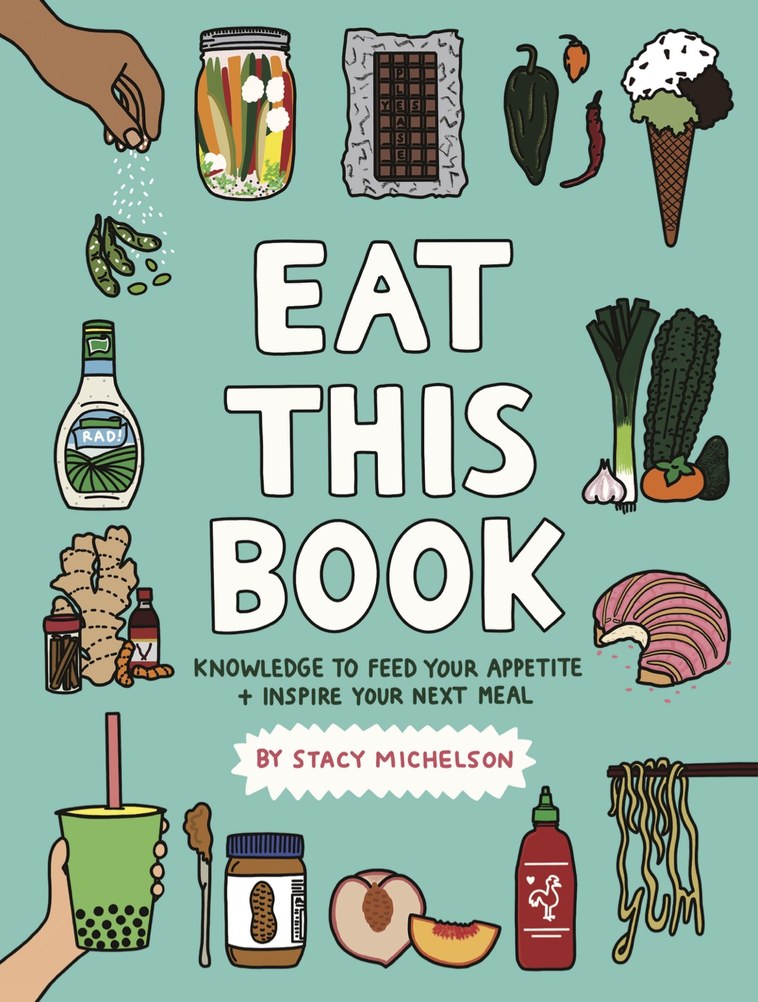