You must remember this flour tortilla at Casablanca in Venice The interior of Casablanca in Venice, a Mexican restaurant with great flour tortillas that's also a shrine to the legendary film. Photo by Gustavo Arellano.

A lifetime ago, I was a film studies major at Chapman University in Orange. And there was no better film that Hollywood ever created in my mind than “Casablanca.”

Everything about the 1942 movie was perfect — the casting of Humphrey Bogart as the cynical romantic Rick Blaine, Ingrid Bergman as his paramour, and Claude Raines as the slimy yet charming Vichy captain Louis Renault who can determine their fate. The razor-sharp dialogue. The theme of duty over love. Legendary character actors Peter Lorre and Sidney Greenstreet. And the theme song, “As Time Goes By,” which brings tears to my eyes even today.

I loved the movie so much, I bought the special VHS version with bonus commentary. I trekked to screenwriter bookstores in Hollywood to buy a used copy of the screenplay. I tracked down posters for my bedroom, and a making-of book for my collection. If only 20-something me had known about Casablanca in Venice, the Mexican restaurant that’s a shrine to the film and its legend. But I had never even heard of it until last year, when Evan Kleiman suggested we include its flour tortillas in my Tortilla Tournament.

“Casablanca” and flour tortillas? No wonder Rick mentioned “a hill of beans” in the film’s climactic scene.

Corn tortillas have been my judging speciality for the past two years in our competition, and I haven’t eaten out much in that time due to the coronavirus pandemic. But a couple of weeks ago, when I was busy picking up tortillas for our judges, I accidentally thought I had to pick some up from Casablanca, not realizing I had already assigned the task to my tortilla runner. It’s quite the trip from Anaheim to Venice, so I silently cursed myself when I parked on a side street near Casablanca and realized my mistake — I don’t exactly have much time for anything that’s not work nowadays.

But then I remembered Film Major Gustavo, and decided to indulge. 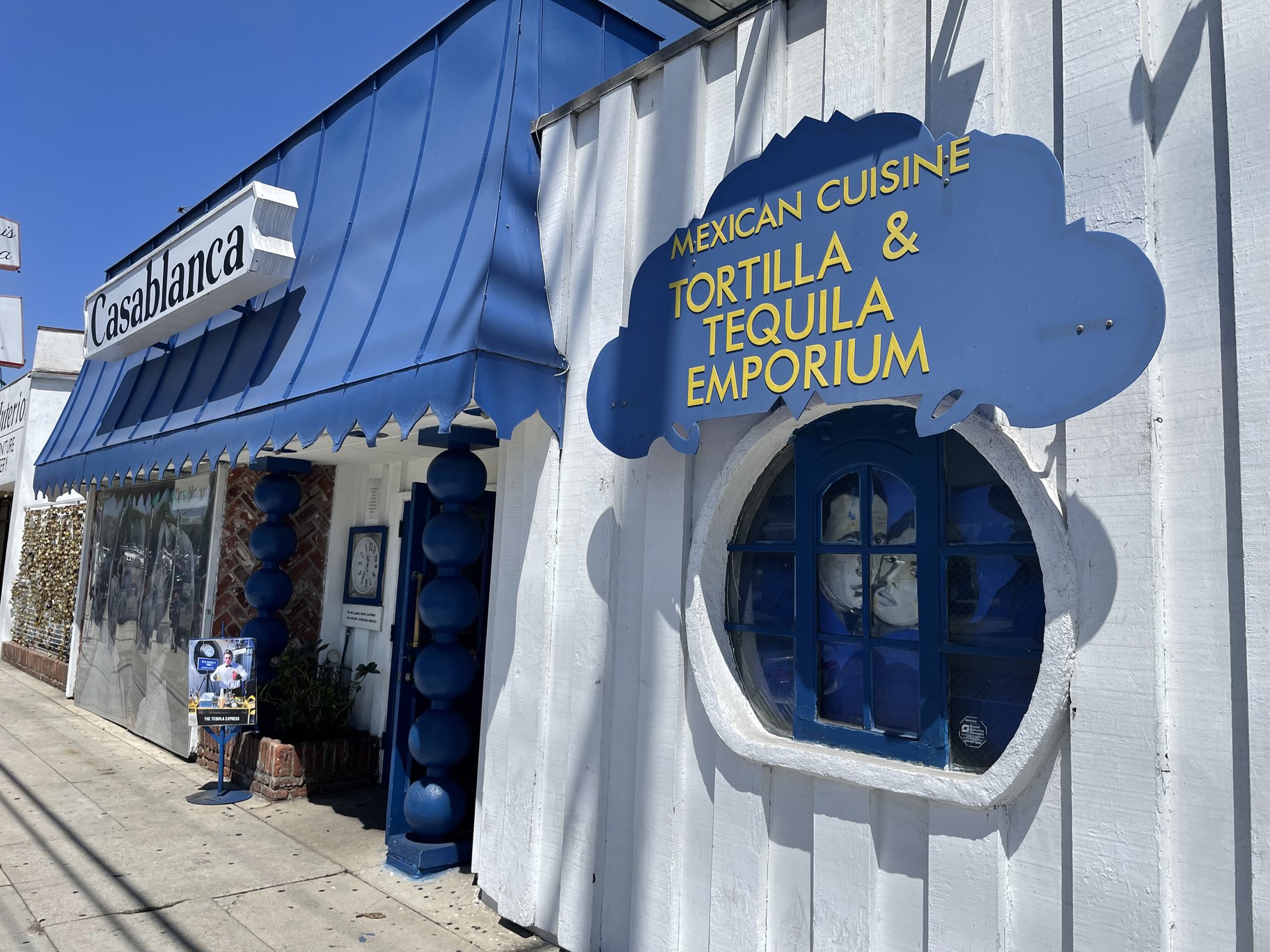 Outside of Casablanca in Venice. Photo by Gustavo Arellano.

I haven’t seen “Casablanca” in at least a decade, and I now think “Apocalypse Now” is the best Hollywood production of all time. So I felt a bit bad that I knew I wouldn’t enjoy my Casablanca experience as much as I might have in years past.

Don’t get me wrong: The place is incredible. Nearly every available inch of the dining room is devoted to “Casablanca”: posters, murals, quotes painted on walls, pictures, clocks. Cardboard cutouts. On Instagram, Casablanca posted a photo of a masked-up Bogart ceramic bust. Even the men’s and women’s restrooms are labeled “Humphrey Bogart” and “Ingrid Bergman,” respectively.

This is fandom at its finest. But now, I was more eager to try the flour tortillas, and ask: Of all the Mexican joints in all the towns in the world, how did this one in Venice become the ultimate monument to an Old Hollywood classic?

The story starts with Carlos Haro, Sr., a Mexican who came to the United States in 1959 and opened a series of Mexican restaurants in Los Angeles. He was also a huge "Casablanca" fan, per this thorough history published by Thrillist in 2016, so when he decided to open a Mexican seafood place in 1980, he chose the “Casablanca” theme. His son added more and more memorabilia as the decades went on, and it became such sacred grounds for the film’s fans that there's even handprints in cement of “Casablanca” performers, and a time capsule with artifacts from the film. 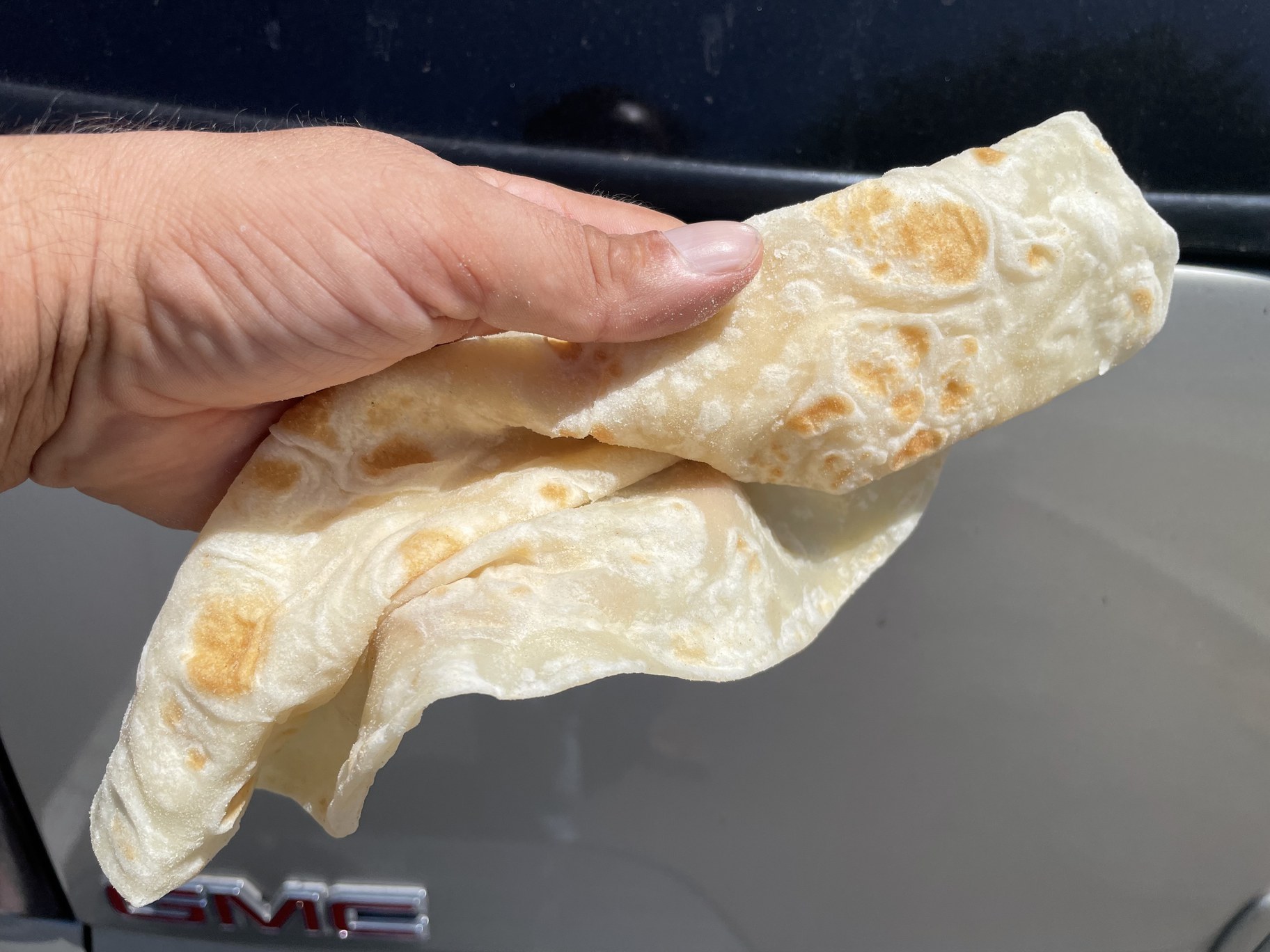 Casablanca's delicious, buttery flour tortilla is currently in the 2nd Round of our KCRW and Gustavo's Great Tortilla Tournament of Champions. Photo by Gustavo Arellano.

I guess Casablanca is famous for its margaritas and calamari steak. I say “I guess,” because I didn’t partake in either — I just wanted to taste the flour tortillas.

The restaurant prides itself on their masa magic to the point that there’s a tortilla-making station that overlooks the dining room. A sign behind it notes that Casablanca has served 2,000,000 tortillas since 1986. Even more intriguing is the picture right below it: Is that really Humphrey Bogart holding a flour tortilla?

I asked the tortillera who was in charge that day if it was in fact Bogie, and she said yes. I asked where the photo was taken. “Here!” she said.

That, of course, was impossible — Bogart died in 1957. Maybe it was an impersonator?

But Casablanca’s tortillas proved true to their hype — powdery, large, and soft. Casablanca serves a savory green salsa with it and butter upon request, but it didn’t need any extra flavor. I sopped up my chile rellenos plate with one, and ordered two more for the road.

Casablanca won in the first round of the Tortilla Tournament last week and now face reigning champion HomeState in the second round. It’s going to be a tough challenge for them. But to paraphrase a wise man, I think this is the beginning of a beautiful friendship.