And the 2021 Great Tortilla Tournament of Champions winner is… Gustavo Arellano declares the winner of the coveted Golden Tortilla. Who could it be? Photo by Brian Feinzimer.

The grand finale of the KCRW and Gustavo’s Great Tortilla Tournament of Champions was a guaranteed winner even before we awarded the Golden Tortilla yesterday afternoon. We were doing it in-person, for one. It was happening at Smorgasburg LA, which is always a feast of carefully curated, delicious desmadre.

And our Fuerte Four finalists — Taco Maria and Tallula’s for corn, Burritos La Palma and Ancho’s for flour — represented the best of the best in Southern California this year, especially since each had weathered a competition that brought back every winner from our previous three years to face off in a masa madness worthy of a late 1980s WWF Royal Rumble.

But then we got to the actual face-offs. What an event! What a finish.

DJs Raul Campos and José Galvan spun a smart mix of everything from Colombian tropical music legend Joe Arroyo’s “La Rebelión” (about a slave uprising) to a trip-hop version of Los Tigres del Norte. I sat in the Ask a Tortilla Judge booth to answer people’s questions, like how to properly clean a comal (you only do it if cheese or meat gunks onto it), or why on Earth did Trader Joe’s go so far this year (it happens). KCRW members got to sample free tortillas from our finalists, while enjoying the great tacos of Tallula’s (a great carne asada), Burritos La Palma (their legendary birria de res), and Taco Maria, who threw together a simple refried beans, cotija cheese, and flash-fried epazote that was just spectacular.

The judging started at noon and happened every hour — first corn, then flour, then the finale. KCRW communications director Connie Alvarez and I represented corn, while Good Food’s Evan Kleiman and Eater LA’s Mona Holmes repped flour. Our tiebreaker judge was food writer Sean Vukan, whose diary of him driving over 400 miles in three days across Southern California to pick up tortillas for us was a rollicking read.

And now, the results! 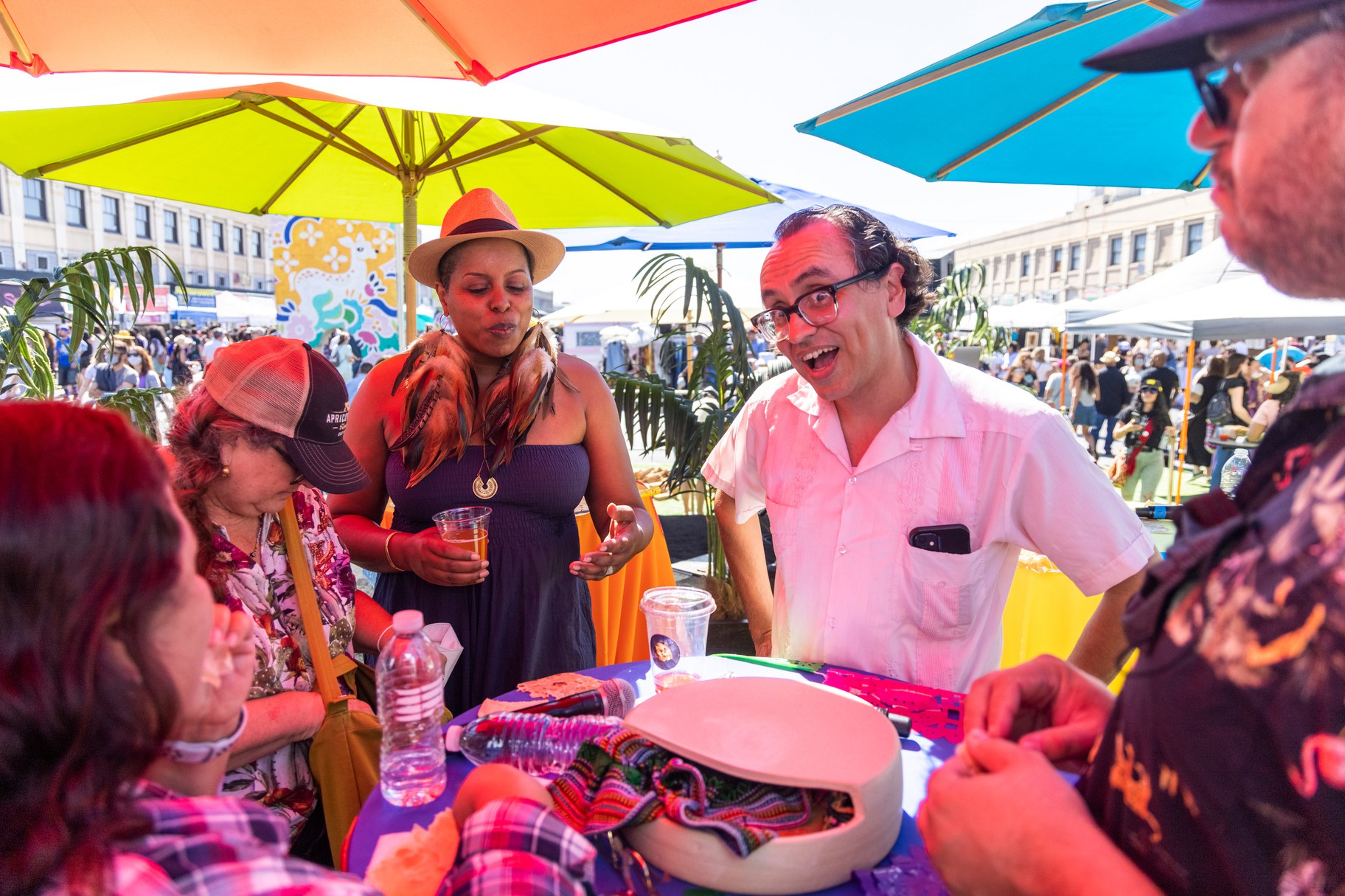 This battle was simultaneously a matchup of twins and polar opposites. They’re both run by celebrity chefs (Carlos Salgado for Taco Maria, Jeremy Fox for Tallula’s), both source their corn from heirloom-corn provider Masienda to make the masa for handmade tortillas, and both deal with blue corn, a tricky canvas that can pay off grandly if done right, or fail badly as a dried collection of gunk.

But Taco Maria is from O.C., and Tallula’s is from Santa Monica. And the former, of course, is the grand titan of corn tortillas in Southern California — a former Golden Tortilla winner, and the only tortilla to ever make it to three finals — while Tallula’s had to upset some favorites on the road to their first Fuerte Four… and their reward was Taco Maria.

Tallula’s brought it. Their corn tortillas were as soft and chewy as finely pressed cornbread, dense but not suffocatingly so, gracias to executive chef Brad Long (Don’t be fooled by the name: Homeboy is third-generation raza from Long Beach). Long has done a great job of not just continuing Tallula’s good start under former executive chef Saw Naing — who, two years ago, approached me during our #TortillaTournament finale and proudly told me he was doing blue corn tortillas, and how can they enter the contest? — but expanding on it.

But Taco Maria is, well, Taco Maria. Their blue corn tortilla had slightly more flavor, more definition, and the slightest of char marks that lent an indescribable smokiness. The contest between Taco Maria and Tallula’s was actually closer than I’m making it out to be here, but Taco Maria nevertheless easily won because, well, Taco Maria.

Winner: Taco Maria. Four Fuerte Four finals in a row, an incredible streak that no corn comer can seem to stop. But watch out for Tallula’s — Chef Long was happy to be there, but vowed to come back next year as a top seed, stronger than ever. 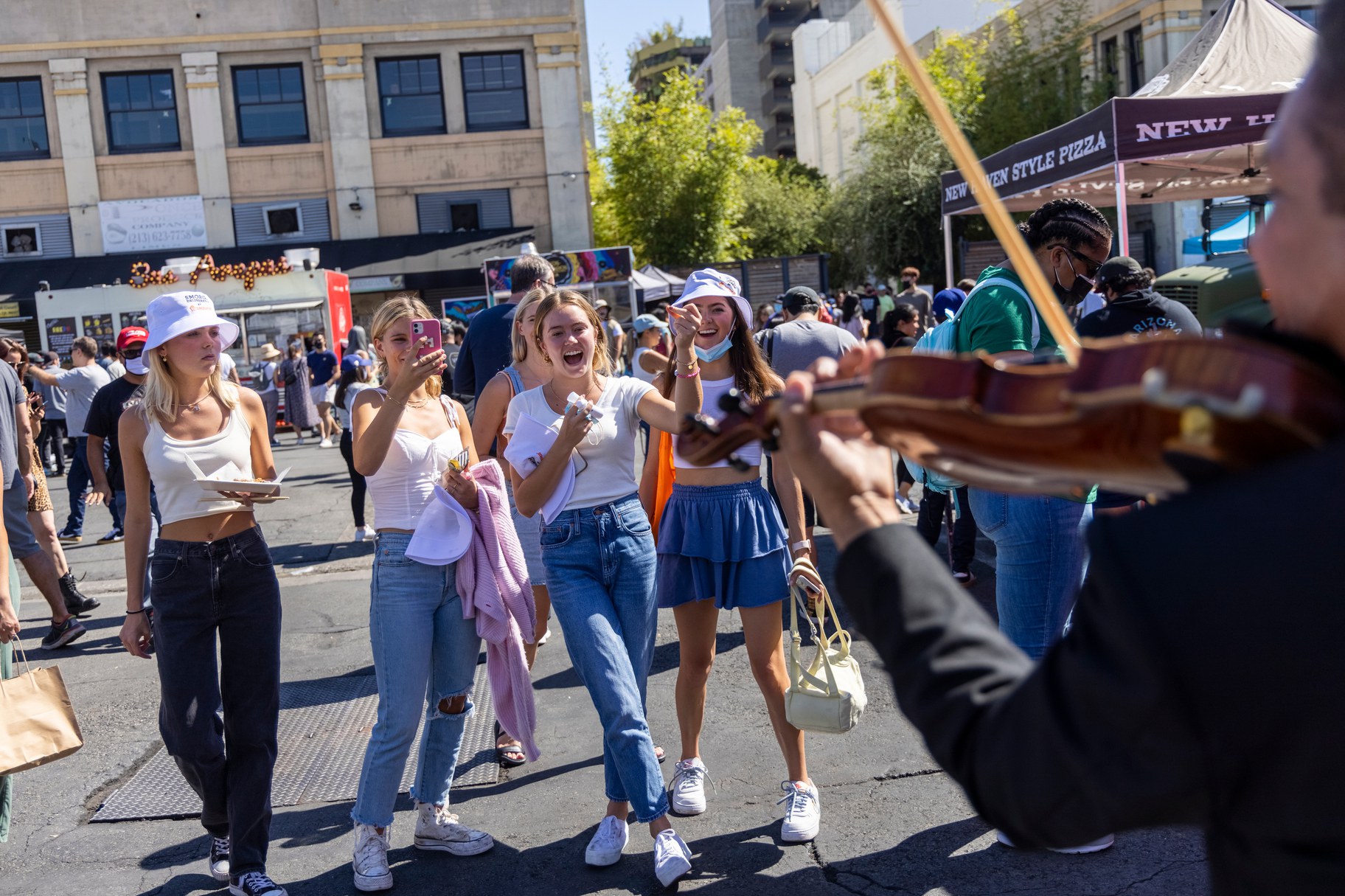 Ancho’s from Riverside shocked last year’s Golden Tortilla winner HomeState on the way to our finale. Eaters loved their condiments of butter and honey, but for judging, all tortillas had to come to us unadorned. And what we all ate was yummy — salty, chewy. Connie compared it to a naan, and we all agreed and applauded their good work.

Then we ate what Burritos La Palma offered.

Evan kind of gave it away when she described the flour tortilla offered by chef-owner Albert Bañuelos as the “platonic ideal” of a flour tortilla. Evan, shush! But she wasn’t wrong. I’ve been eating Burritos La Palma’s flour tortillas almost weekly now for a good seven years, and this was the best flour tortilla they had ever made: shiny, soft, and almost sweet due to vegetable shortening, the tiniest bit flaky, with a great wheat flavor, and just incredible overall.

Winner: Burritos La Palma. It wasn’t close. Ancho’s had a great run, and I can’t wait for Angelenos to make the trek out to Riverside for some of their small flour tortillas and massive margaritas, but Bañuelos — who had made it to the first two Fuerte Fours before not even going past the second round last year — came to redeem his small chain’s honor, and did so well. 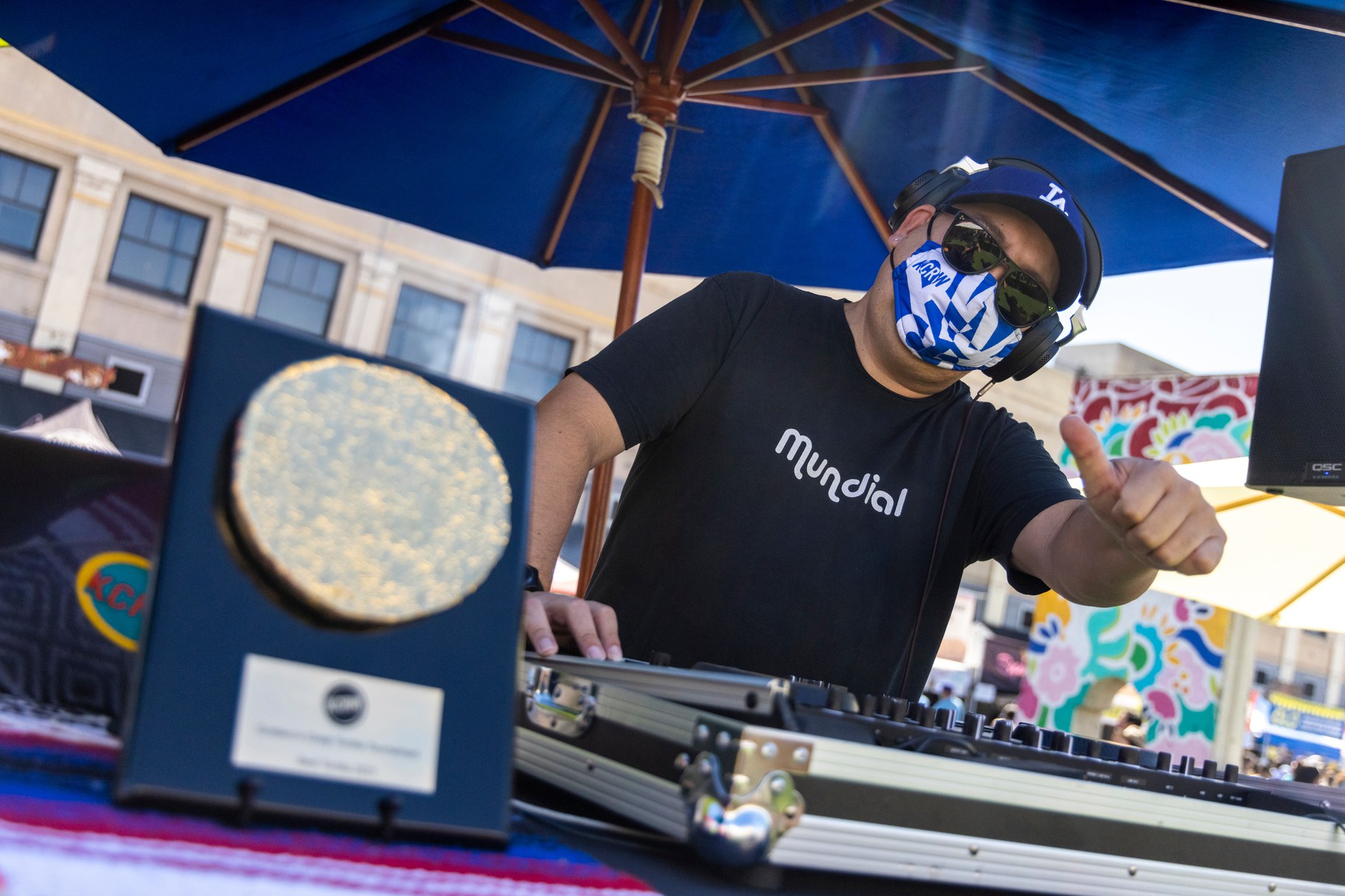 DJ Raul Campos gets the crowd hyped for first round results. Photo by Brian Feinzimer.

Every year, when we get to this stage, Evan, Connie, and Mona wonder why we have to award a grand champion. Comparing corn to flour tortillas is like comparing apples to oranges, no?

Next year, we’ll introduce smaller trophies for each corn and flour champion — but, like “Highlander” proclaimed, there can be only one (Golden Tortilla) winner. We had to determine it.

But man, it was hard.

Bañuelos and Salgado are acknowledged masters of their respective crafts, beloved as much for their talent as for their kindness. They’re both personal friends of mine whom I’ve contracted for important moments in my life — Salgado helped to cater my wedding in 2014, while Bañuelos catered the reception after the burial of my mother in 2019. They are friends of each other, as well — Albert and his wife Lauren (who helps when she can because her day job is teaching elementary school) were there when Salgado did a soft reopening of Taco Maria earlier this year.

But, as I’ve said before, friends sometimes have to face off. 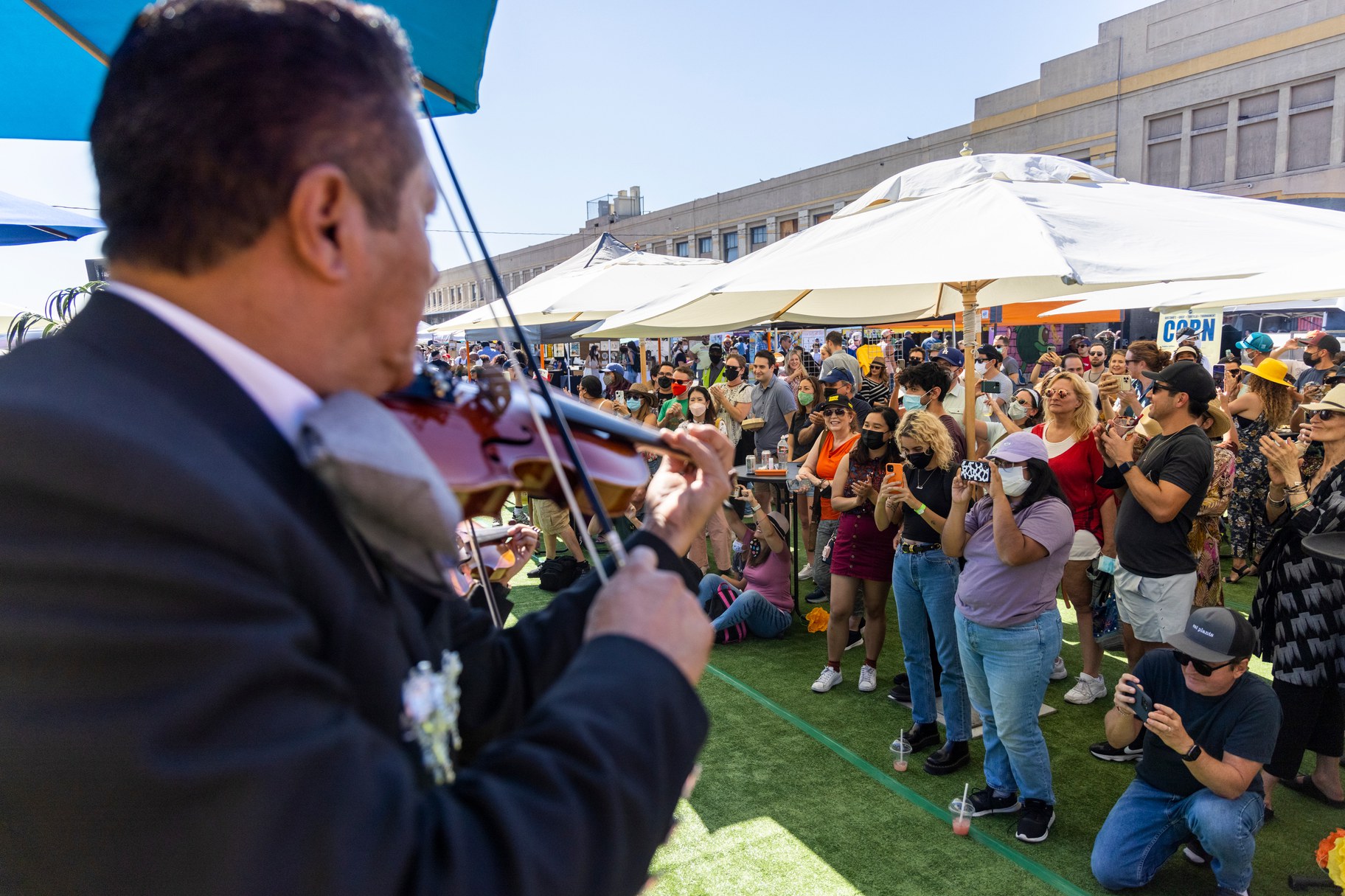 The crowd awaits the final results. Photo by Brian Feinzimer.

Taco Maria’s blue corn tortilla was technically perfect, if only the tiniest bit saltier than it should’ve been. It’s still a profile in heritage that everyone should eat at some point in their Southern California lives. Burritos La Palma, meanwhile, was just as perfect as the first round, if just a smidge less spectacular this time around. But who was going to win?

Mona, Evan, Connie, Sean, and I huddled and talked for a good five minutes. Then, we reached our decision. I called Mariachi Cielito Lindo — which had strolled around Smorgasburg LA playing great tunes — to the stage and asked them to play the traditional Mexican celebratory song “La Diana” once I announced the winner, who was… 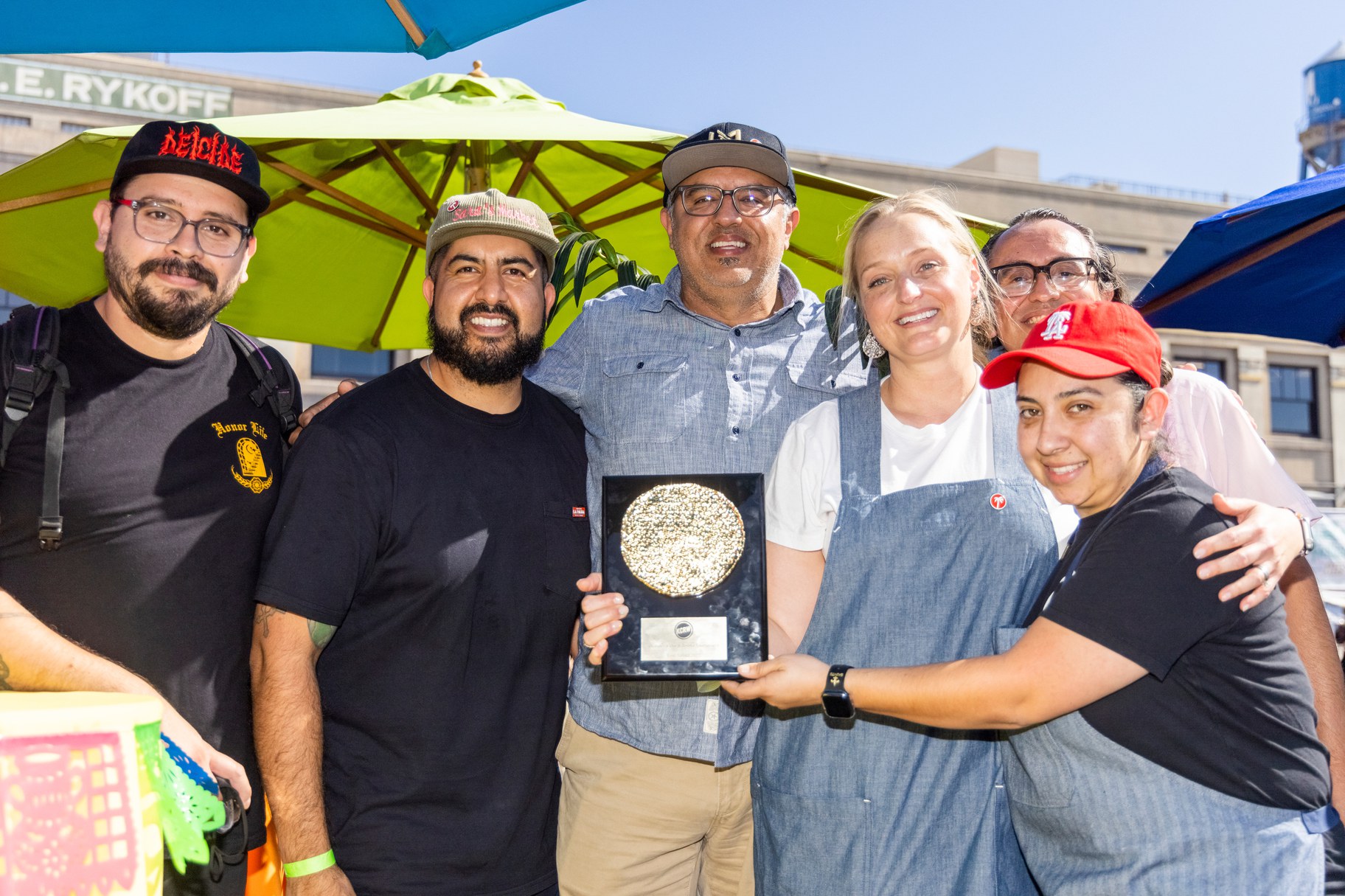 The staff of Burritos La Palma pose with their winning trophy. Photo by Brian Feinzimer.

Oh, it was close. But what pulled them past Taco Maria yesterday was the answer to this question: Which tortilla would we judges want to eat more of later that night? And on that day, it was Burritos La Palma.

Albert and Lauren came on stage to get their Golden Tortilla; Salgado offered congratulations. Evan mentioned how the best part of the #TortillaTournament is how Southern California tortilla culture has improved dramatically since we started the tournament in 2018 — and how we expect the same next year.

Gracias, all of ustedes, who were able to attend yesterday — we had visitors from Oxnard and Massachusetts, West Covina and SanTana, and all points in between. And if you weren’t able to attend, no worries — but now, you’ve got a lot of eating to do.

And for the top eight corn and flour finishers, who automatically return next year, and the 48 new contestants who’ll join them? Get ready.

Check out more photos from 2021 Great Tortilla Tournament of Champions below: 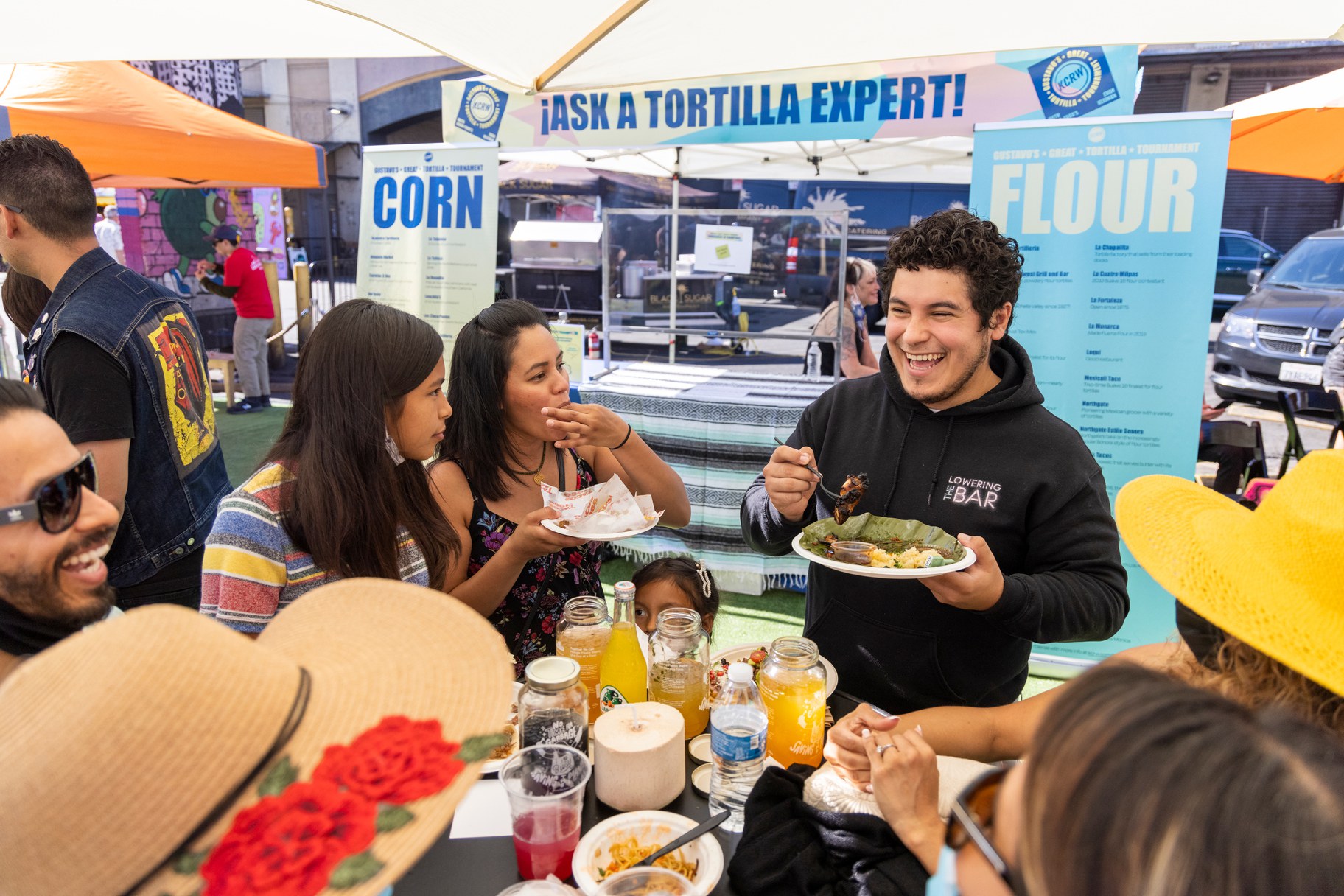 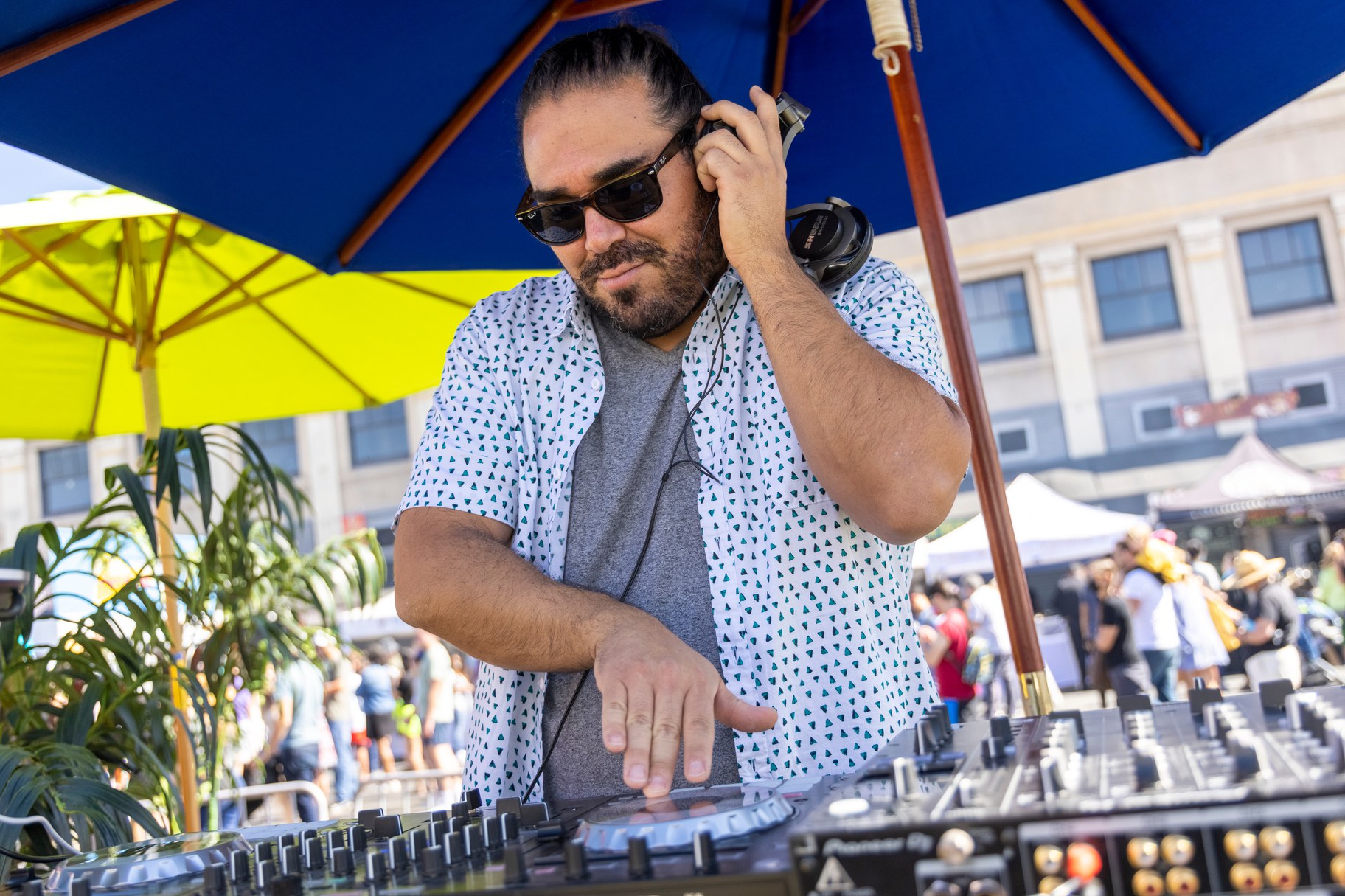 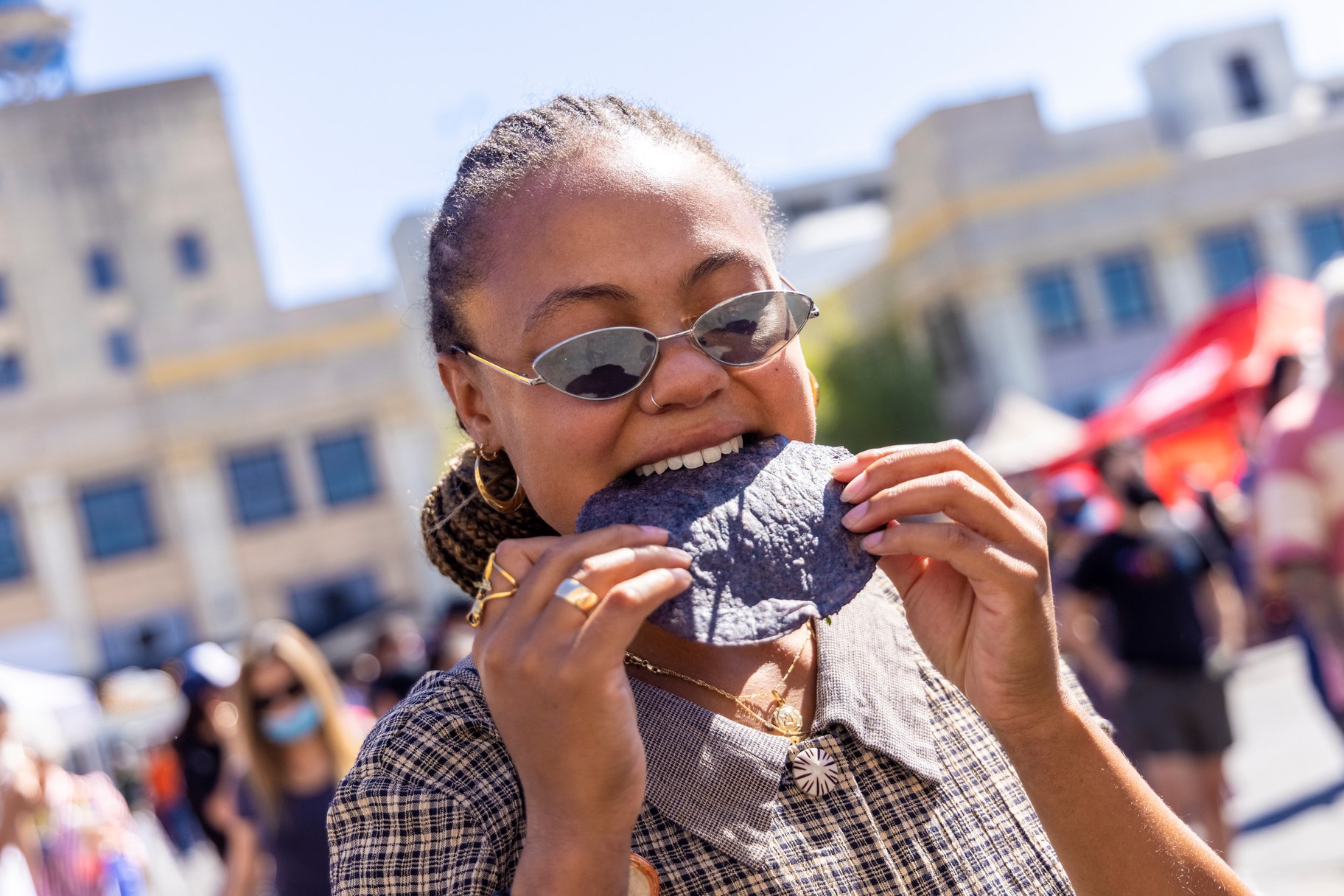 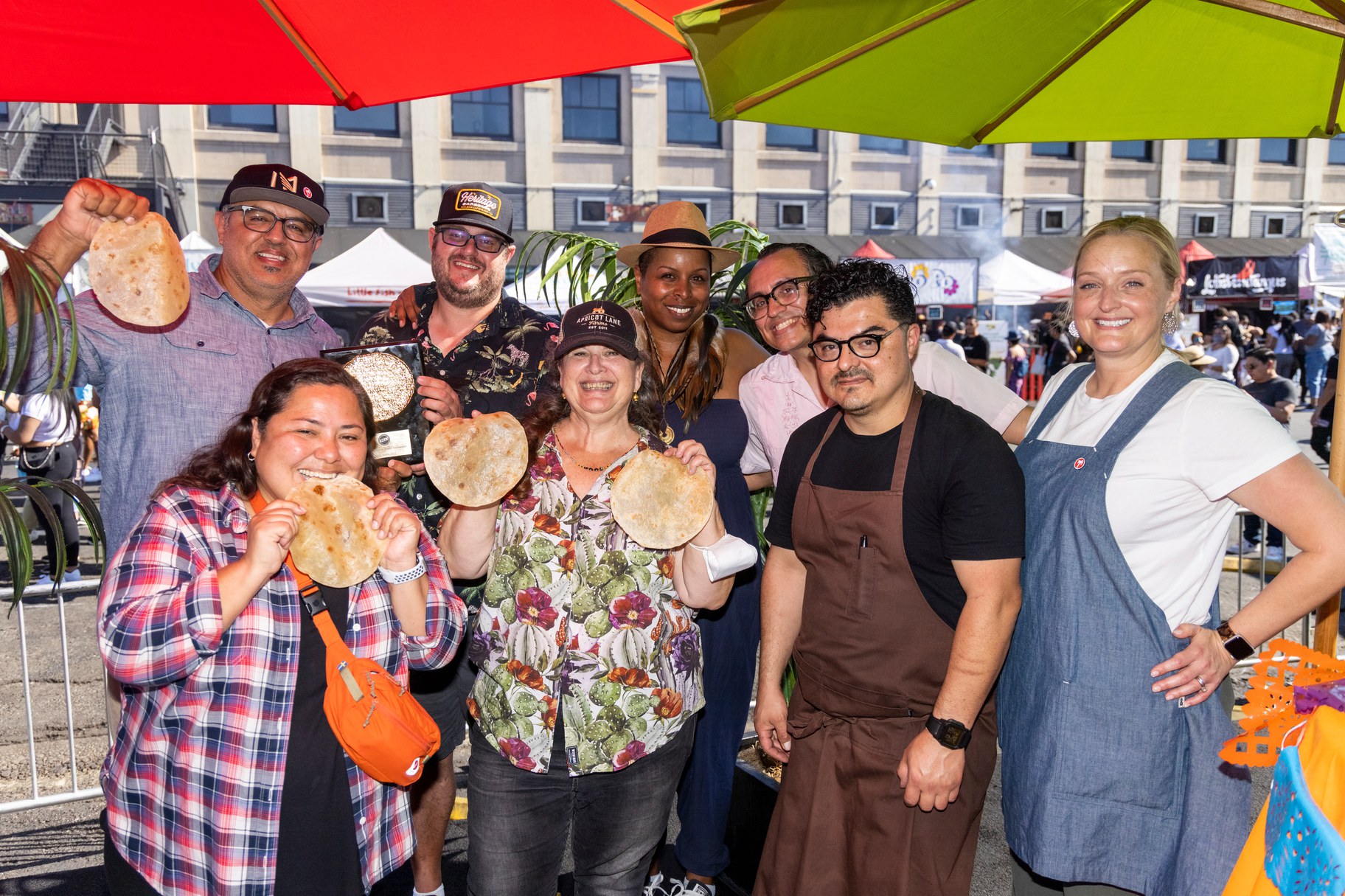 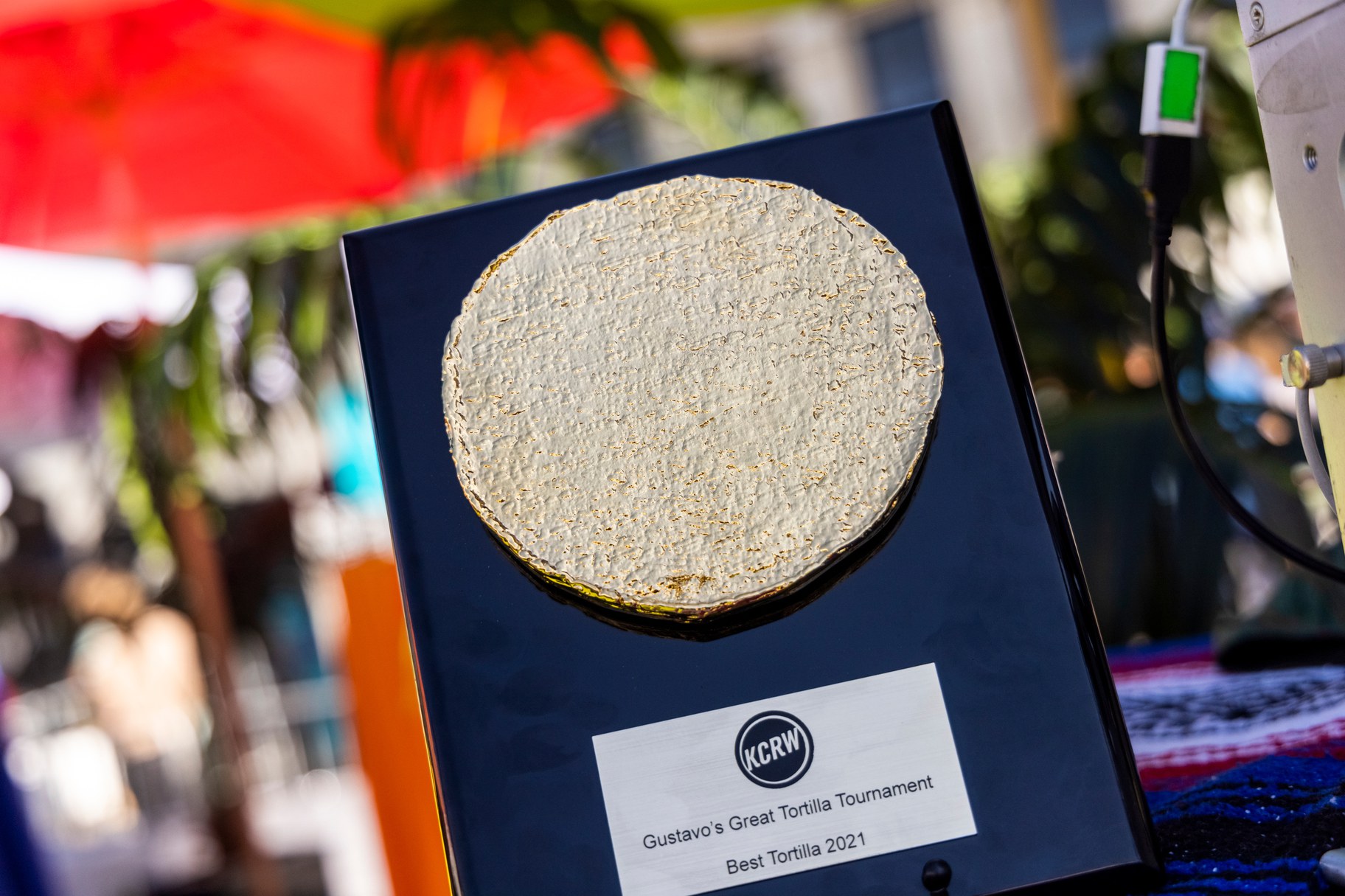 All photos by Brian Feinzimer