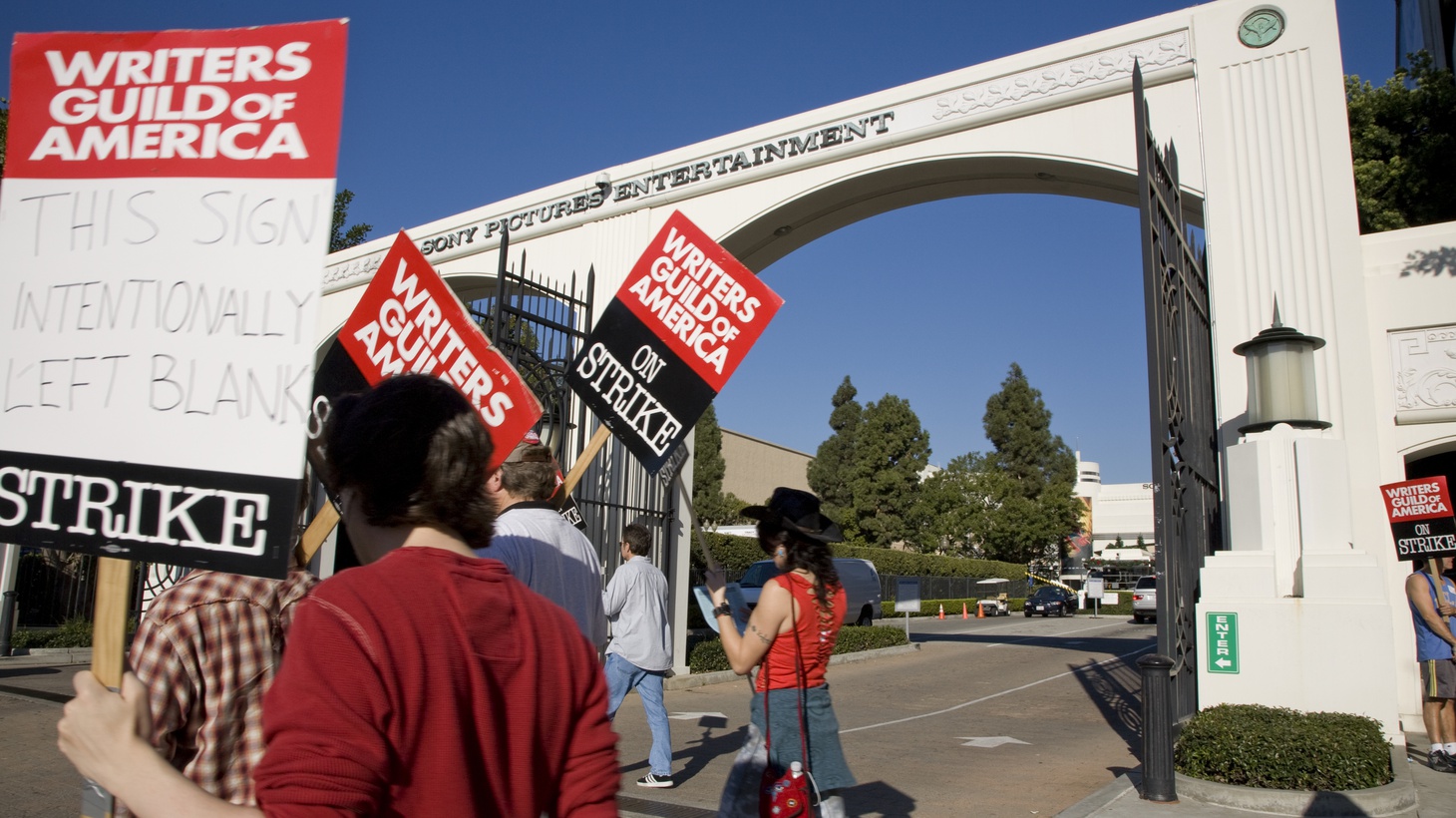 Members of the Writers Guild of America picket at the entrance of Sony Pictures Entertainment studio in Culver City, on December 3, 2007. Photo by Jose Gil/Shutterstock.

Will writers strike in 2023? Are the studios preparing? And will there be a mega studio deal? There are questions Kim Masters, Matt Belloni, of Puck News, and Lucas Shaw, of Bloomberg, address while taking a quick look ahead at these looming Hollywood stories, on a special edition of The Banter.

Kim Masters: There are a couple of big looming issues. Strike or no strike in 2023?

Lucas Shaw: I've been leaning no, but I might be about to change my mind. The no for me, it's just I don't know that the writers want to go through another painful labor dispute, especially if there's a major recession.

However, the last time there was one of these disputes, one of the reasons, I don't think there was a big work stoppage, is because the studios really needed fresh product. I think now that a lot of the studios would actually be fine if a strike happened because they're all looking to save money, and if they didn't have to spend a bunch of money on new things, they would find other ways to fill the gaps and they could sell that to Wall Street. I think I'm coming around to the idea that there will be one.

Matt Belloni: I think that all signs right now are pointing to a strike. The writers are pissed. They feel that it's not just a money issue, the studios are going to come to them with gains, a couple percentage [points] here, better benefits there. The writers feel that there is a fundamental misalignment in how they are paid vis-à-vis how the studios make money these days, and that is not something that can be resolved that quickly. It's going to take real negotiations, and they're not going to even go to the studios until it's almost too late.

If you look at the way that David Goodman and some of these other people with the Writers Guild have operated in the past, they get the strike authorization from the membership, then they go and they say, “Okay, this is what we want.” If the studios say, “No,” they say, “Okay, we strike and then we negotiate.” So I think that's going to happen and the way it lines up, it would happen in May, we'd probably have a strike over the summer. Who knows what would happen if people say, “Okay, we're taking the summer off. We will then resume production in the fall.” I think it's going to be really ugly.

Masters: I'll just note that the Directors Guild, which is usually the easiest, goes first and sometimes sets a pattern, [is] sounding a little more warlike this year, so maybe. I'll be non committal. I'm saying maybe.

Studios don’t seem be be preparing

Shaw: It's also strange. You made the point about stockpiling, and oddly, from everything I'm hearing, most studios and networks are not doing as much of the normal strike preparation as they would be.

Belloni: Because they have all this content that they're trying to figure out what to do with. You see shows getting unrenewed and you see people's deals being kind of left to languish. I think that they are recognizing that they have to cut costs, and if there's a strike, they're gonna have stuff that's prepped and ready to go. But it's not like 2007 where it was like, everybody is rushing to finish this stuff before the strike, so they can have [a] product.

Masters: We are looking at a cold winter ahead. It certainly looks like it, with the way the economy is.

Masters: Quick prediction, is there going to be a mega deal in 2023?

Some people have taken, to the annoyance of David Zaslav, the Warner Bros. Discovery deal with Comcast or NBC Universal as a given. That would be a really big deal. I don't think it can happen this year ahead because of tax considerations and the nature of the deal. But are we expecting something in 23?

Belloni: I think so. I think that if the current trajectories hold and the financials of these companies become more perilous, their stock prices stay low where they are, I think all of the incentives are going to align for further consolidation. I don't know exactly how that's going to play out, whether it will be a combination of Comcast and Warner Bros. Discovery with the reservations you mentioned, or whether it will be Paramount doing something, or Netflix buying something or getting bought. Something's [going] to happen.

Shaw: I think you'll see a smaller deal in 2023, by which I mean more than $1 billion but less than $10 billion by Lionsgate, an AMC Networks, one of these smaller companies that if the market really tanks is going to be in an untenable position.

If you're a Warner Bros. Discovery, if you're a Comcast, if you're a Paramount, if you're a Netflix, Disney, so on, it can get really bad, but you're still going to be totally solvent and fine because you're just so big.

I think you then have a much bigger deal in 2024 when some of the dust has settled and someone gets opportunistic.

Masters: I have to agree with that analysis.