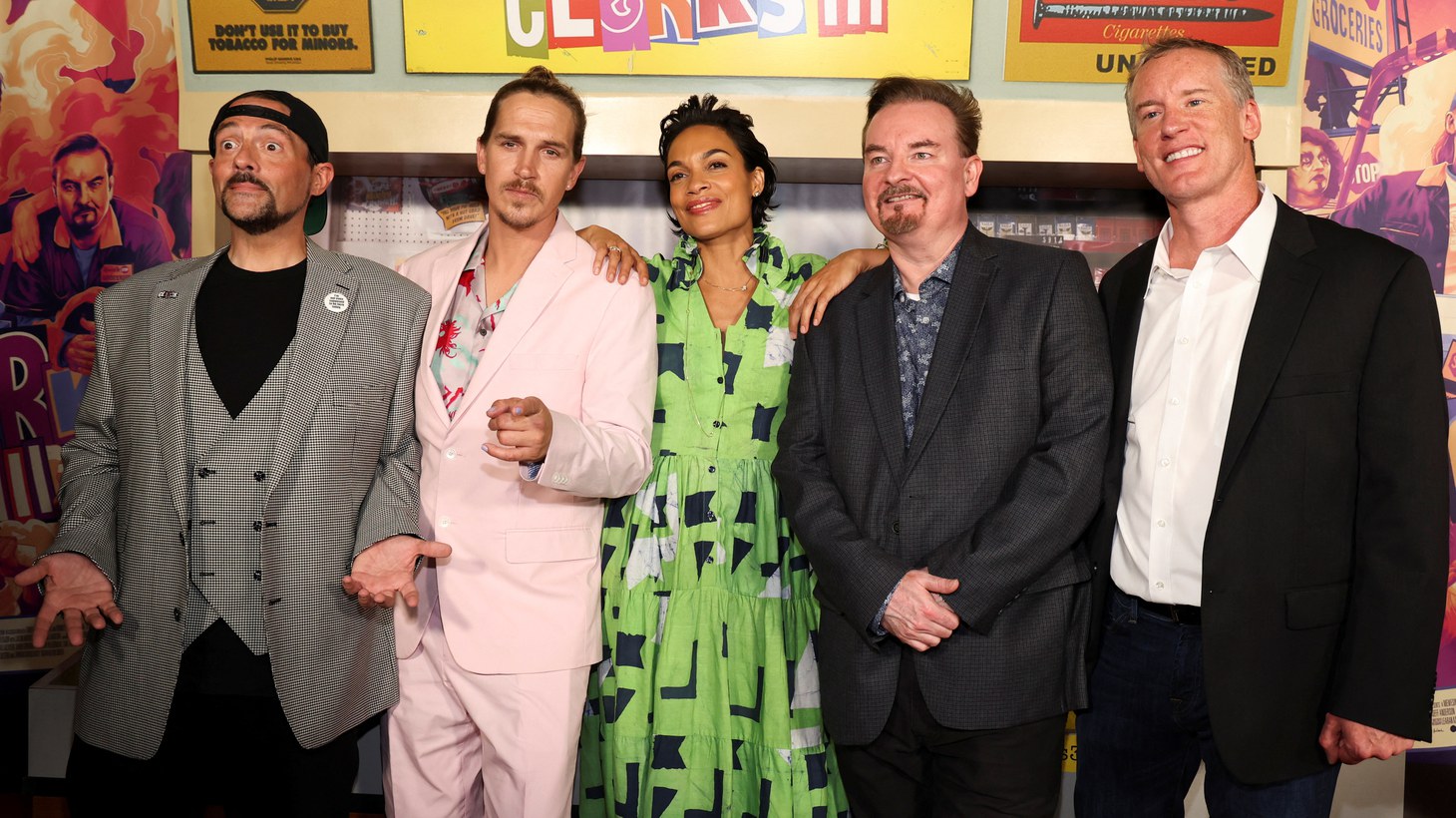 It took filmmaker Kevin Smith almost 30 years to make “Clerks III,” which cost $7 million. Like his 1994 “Clerks,” this rendition is another snapshot of the filmmaker’s life.

“[It] is dripping with authenticity because it was made by an earnest young filmmaker who dreamed about being considered a director, who literally worked in the same store where they shot the movie,” he says. “Clerks,” Smith’s first feature, was shot after hours in the convenience store where he worked.

On “Clerks III,” after Randal (Jeff Anderson) suffers a heart attack, he enlists his friends Dante (Brian O'Halloran), Elias (Trevor Fehrman), Silent Bob (Smith), Jay (Jason Mewes) and Becky (Rosario Dawson) to make a film about the convenience store where it all started.

Smith’s original version was set after Hurricane Sandy, but he rewrote it to give Randall a heart attack instead, following his own health scare. “‘Clerks III’ is more of a meditation on living…this one is predicated more on my heart attack,” he explains.

“Clerks III” was made, he observes, because of the cult following of “Clerks.” Fans “bought enough DVDs and blu rays… [and] didn't sit around and just stream it.”

The film doesn’t have a wide distribution because it didn’t make financial sense. “This is a movie with an ardent following, but it's not worldwide. It's very localized, in pockets,” Smith explains.

For that reason, he is touring and meeting “Clerks” enthusiasts at limited theatrical venues across the country, starting September 13. “I'm going to be on the road with my movie, sitting down every night with 1,000 people consuming this,” he says. “It's fantastic, and this gives me a way to correct the past.”

One of the amendments he wants to make is with his 2014 comedy-horror film “Tusk.” The movie had a $3 million budget, but A24 released it in 600 theaters without marketing. “At the end of the day, I watched ‘Tusk’ implode,” he laments, adding he has been criticized for that ever since.

On the bright side, he is making “Tusks” and touring the sequel in 2024. “That's my naked, goddamn ambition, to make a very successful version of ‘Tusk’,” Smith says. “You can be as stupid and creative as you want, so long as you do your homework, cross your t's, dot your i's and make sure you get people their money back.”

“They wanted essentially to make ‘Game of Thrones’ style episode pilots with this anthology series, and have a bunch of different filmmakers handle these characters in a bunch of different styles,” he explains. “So it was very ambitious…but I always felt like, ‘There's no way this moves forward.”

Smith was signed to co-write and direct one episode centered on the lesser-known DC characters Jimmy Olsen and Bizarro, but at the end, “it all went away,” he says, adding that the math used here was similar to the one used to shelve the $90 million “Batgirl.”

Despite this latest disappointment, Smith has been involved in two other projects besides “Clerks III” this year.

His animated series “Masters of the Universe: Revelation” is getting a second season on Netflix. Smith created, wrote and executive produced the show. He got involved with it after Rob David, Vice President of Content Creative at Mattel, and Ted Biaselli, the Director of original series at Netflix, saw Smith’s 2003 animation “Daredevil, Vol.1: Guardian Devil.”

Smith says Biaselli envisioned the series as a Shakespearean version of the classic 1983-1985 “He-Man and the Masters of the Universe,” so that’s how they treated it.

Also, Smith’s “Killroy Was Here,” which he directed and co-wrote, was the first feature film’s rights in history to be released as an NFT (non fungible token) format earlier this year.

The film was made in Sarasota with the students from the Ringling College of Art and Design. “It was meant to be a school project, a short, but then I was like, ‘Let's make a whole movie’,” Smith says, a way to show them the process from making, to marketing and distributing a film.

The horror anthology is centered around the phenomenon of the "Kilroy Was Here" graffiti.

Since his heart attack in 2018, Smith says his work has shifted.

“Now I'm living on borrowed time,” he says. “So I'm just gonna do whatever I want, and hopefully, it's interesting to the audience, at the very least, and maybe it kind of knocks open a few doors for other people.”