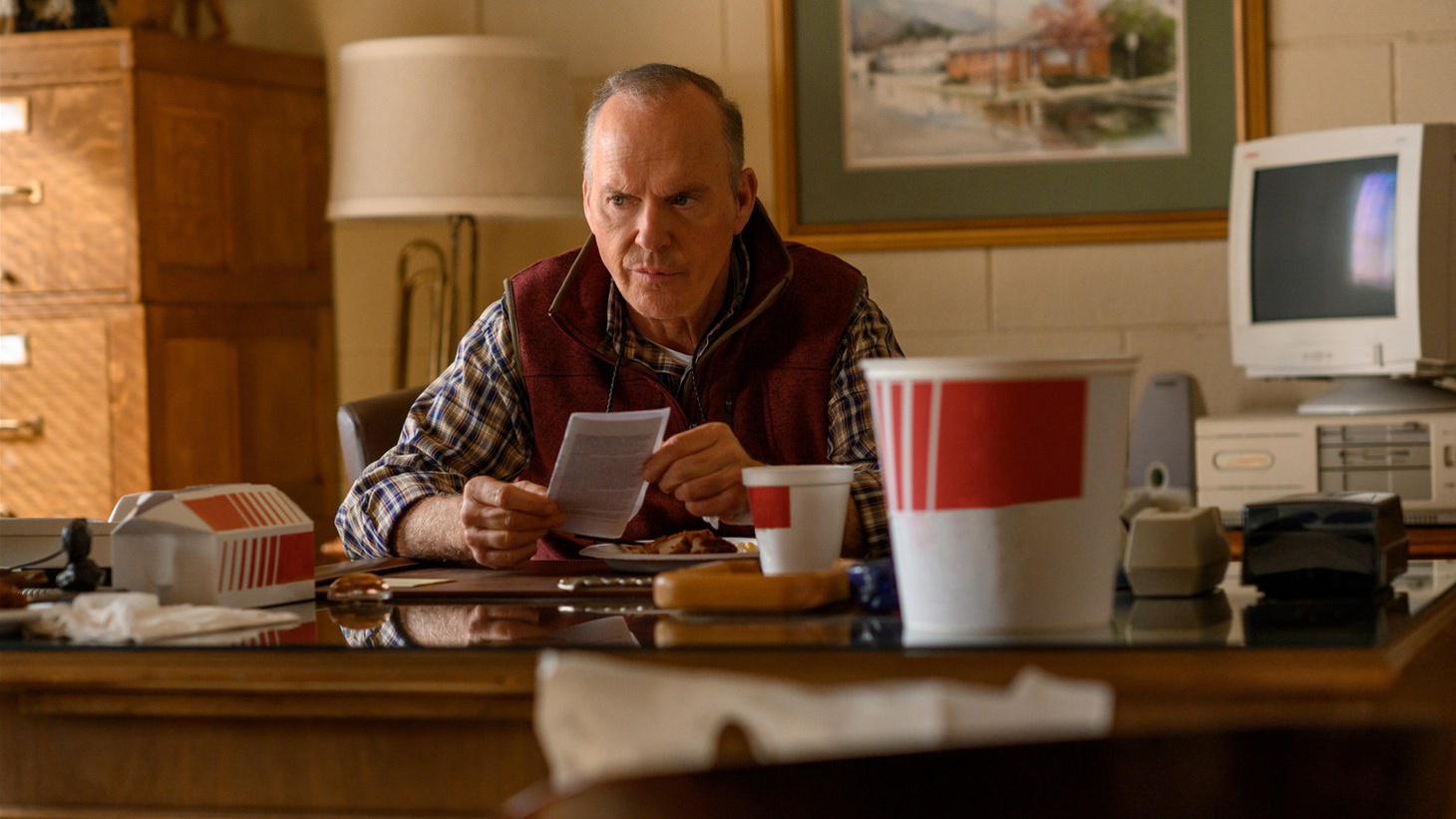 In Hulu’s “Dopesick,” Michael Keaton plays a country doctor who is initially skeptical of Purdue Pharma’s claim that its drug OxyContin is non-addictive. Photo by Antony Platt/Hulu.

The Business revisits a conversation from 2021 with Danny Strong, writer, producer, and creator of Hulu’s series “Dopesick,” which has been nominated for 14 Emmys, including three nods for Strong.

Keaton plays Samuel Finnix, a salt-of-the-earth doctor in Appalachia who is skeptical at first about Oxycontin. But Purdue Pharma had the drug’s label cleared by the Food and Drug Administration, so like many, Finnix is led to believe it’s not addictive, and ends up prescribing the miracle new painkiller to his patients, many of which get addicted and die of drug overdoses.

The series, inspired by Beth Macy’s 2018 bestselling book “Dopesick: Dealers, Doctors and the Drug Company that Addicted America,” tells the true story of how Purdue Pharma aggressively promoted the sales of OxyContin as safe. However, the Sackler family and their company made billions and have contributed to the epidemic that has killed more than 500,000 people since 1999 in the United States, according to the CDC.

In this conversation with The Business last year, Strong describes his interest for the project, and the roller coaster he faced to get the series done and running on a streaming service.

Strong says he got interested in the drug addiction subject matter after having a breakfast meeting with producer John Goldwyn. Goldwyn and Karen Rosenfelt pitched him this story, which Strong immediately started researching.

“It's a bit of a rabbit hole when you start reading about [the Sackler’s] produced crimes, the extent of their lives, and how they misbranded, manipulated, pedal-influenced,” he says. “You just can't believe what they did. The whole story is so shocking, I just had to figure out how to get this told in a mainstream way.”

Bidding war for the book “Dopesick”

Strong was well into making the series based on Macy’s book and had already pitched and sold it to FX Networks, when 21st Century Fox – both which are subsidiaries of The Walt Disney Company – acquired the rights for the book and had producer Warren Littlefield attached to it. Strong found out about the book deal in the news.

“[21st Century Fox is] in bad shape now because they just have a book where I have a pitch ready to go,” he says. “You can take a year, two years to find a writer.”

Teaming up with big names

Eventually, Strong was asked to team up with Macy, who is an investigative reporter, which for him was an easy partnership.

“There wasn't a hard push. I read the book, [and thought it] was fantastic,” he recalls. “Beth Macy was an integral part of the team. She’s this incredible woman.”

The show also brought in executive producers Littlefield, Goldwyn, and Rosenfelt. “This wasn't a battle, or a war, or even a big source of contention. There was just a big ‘What the fuck!’ moment when it happened,” Strong claims. “And then we worked it out relatively quickly.”

In the meantime, Strong was racing to beat Netflix, which was ahead in producing a series on the opioid epidemic based on writer Patrick Radden Keefe’s work.

“It's just so hard. It can be really demoralizing,” he says. “So we were in this race, and then they started their writers room, before I had any greenlight anywhere.”

After Strong wrote several drafts, FX ended up pulling the plug on the series.

“I think that might have been discouraging to FX of just this competing project in Netflix,” Strong says, adding he was surprised because he was getting calls from agents and pitching clients. “But I don't make the decision, and the people that do have their reasons, and they're tough decisions to make.”

The series got the boot by FX on a Friday, but the head of Disney Dana Walden called Strong and said she would take the series to Hulu’s head of content Craig Erwich to see what would happen. By Tuesday morning, Strong was greenlit to make the series for Hulu.

“Knowing Netflix had a competing show, and was actually in an active writers room, that's pretty hardcore,” he says. “Craig Erwich was like, ‘You know what, I got this. Let's just do it.’ It was pretty cool and a big hats off to them.”

From getting the greenlight, the next step was finding a director for the pilot. He suggested the legendary Barry Levinson because he felt Levinson was the perfect person to make it. “I think Barry is throwing fastballs just as hard as he's ever thrown them,” Strong states. “We've got an iconic director doing a pilot on a limited series. You don't always get icons to direct your pilots, that's not so common.”

Then, they cast Michael Keaton, who has just received an Emmys nod for Outstanding Lead Actor in a Limited or Anthology Series or Movie for his role as Dr. Samuel Finnix on the series.

“It went from that FX passing to within four weeks, just everything started rolling my way in a thrilling way,” Strong describes. “All of a sudden, it's like I've got Barry Levinson, Michael Keaton, Hulu…the only thing that can stop this is a worldwide pandemic, and there's no way that's going to happen.” 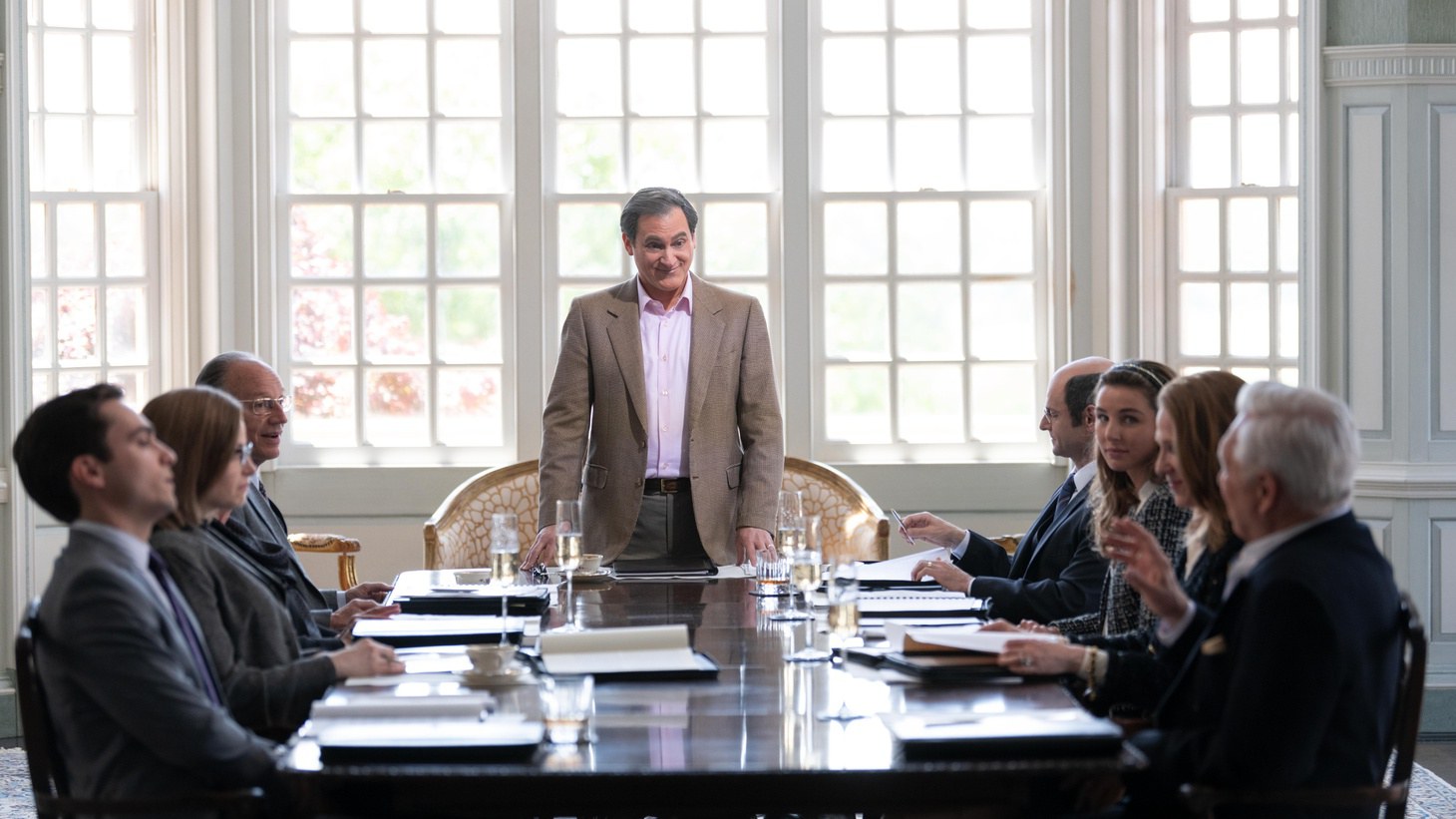 “The whole story is so shocking, I just had to figure out how to get this told in a mainstream way,” says Danny Strong. In Hulu’s “Dopesick,” Michael Stuhlbarg plays Richard Sackler, the architect of Purdue Pharma’s deadly OxyContin strategy. Photo by Gene Page/Hulu.

For Strong, it was important to get into the mind of Richard Sackler, the architect of Purdue Pharma’s deadly Oxycontin strategy, and attempt to find his humanity.

“There was a decent amount of information out there: five books written at that point on the opioid crisis, he [had] given a deposition,” Strong says, adding he also had accounts from people who worked closely to him and wanted to talk, and access to some of David Sackler’s emails. “When you combine all this, you start to get a sense of what you think is happening.”

“Ultimately [it’s] not just physical characteristics or traits. That's part of it, but the thing I wanted to dig into is, ‘What's motivating him?’ ‘What is his pain?’ ‘What drives him?’ ‘Was it money?’” Strong asks. “To be honest I'm actually really proud of the portrayal because I think it's much more dimensional than even the people closest to him wanted it to be.”

Racing to finish the shoot

Then, two and a half weeks before the series was wrapped, Keefe’s book “Empire of Pain: The Secret History of the Sackler Dynasty” came out.

“Beth and I started reading it as fast as we could to see if we got anything wrong,” Strong says, adding they got very similar content and sources. “I wish it had come out three months earlier. But what can you do?” he ponders.

But as they filmed the final scenes, more facts kept coming out.

“I rewrote the scene the night before with the new information, much more explosive, and then we shot the scene,” Strong recalls. “It was like the information never stopped coming.”

“Dopesick” is streaming on Hulu.