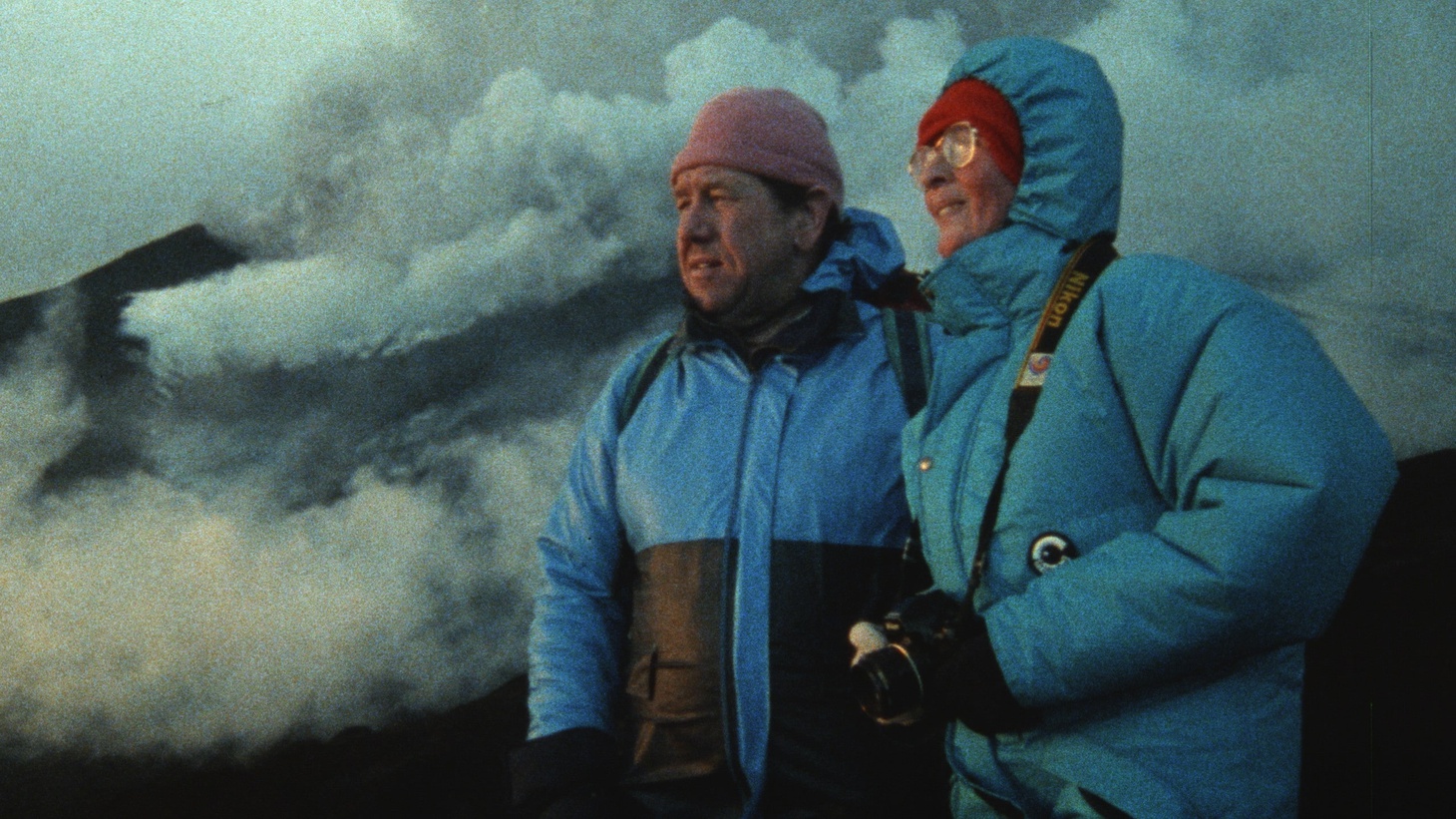 “I firmly believe that [the Kraffts knew] that at any moment could be their last, and that propelled them towards this beautiful, deeply meaningful life where they boldly pursued what they loved most in the world, which were volcanoes,” says filmmaker Sara Dosa. Maurice and Katia Krafft gaze upon a volcano in the distance as smoke and ash swirl behind them. Photo courtesy of Image’Est via National Geographic.

As she toiled with the final stages of “The Seer and the Unseen,” filmmaker Sara Dosa came across archival footage by two world-renowned volcanologists Katia and Maurice Krafft, and realized she wanted to dwell in their world next.

The Alsatian French couple had spent decades traveling the world writing, and lecturing on the beauty and dangers of molten lava and blasts of hot gasses and filming and photographing their discoveries. Their catalog had changed hands through the years, but Dosa found the bulk of it at the Image’Est archival facility in Nancy, France.

She asked the Image’Est staff to scan the 16 millimeter films and thousands of photographs that mostly Katia had taken. “There was maybe about 30 to 40 hours that had been digitized beforehand for previous films, but getting to have the entire collection digitized was such an incredible process,” she recalls. “And it was so wonderful to watch all that footage.”

Dosa and her team received them in batches of about 20 hours of materials at a time, and went to work. They combed through some 200 hours of the Kraffts’ movies, photographs, plus another 50 hours of recordings, documentaries, and interviews with them. And from the Kraffts’ own archives, they picked, cut, and created “Fire of Love.”

The documentary explores the love relationship between the Kraffts and their devotion to studying volcanoes. The French-scientist couple traveled the world chasing eruptions while documenting their discoveries for two decades, until a pyroclastic blast took their lives at Mount Unzen, Japan in 1991.

Dumbfounded and inspired by the footage

What first caught Dosa and her team’s attention to the Kraffts’ story was the details in their films and photographs.

“When we first came across their imagery, we noticed a remarkable eye towards composition,” Dosa observes. “They got so close to erupting volcanoes it is unlike anything we've seen before.”

But beyond that, their love for volcanoes came through their imagery.

“There is an unmistakable love behind the frame where you could just sense their devotion,” she says. “There's a wordless quality to images where you know that the person looking at the object being recorded has such a love or desire for it, like it was in the molecules of everything that they filmed. So we were just absolutely kind of dumbfounded, inspired by that.” 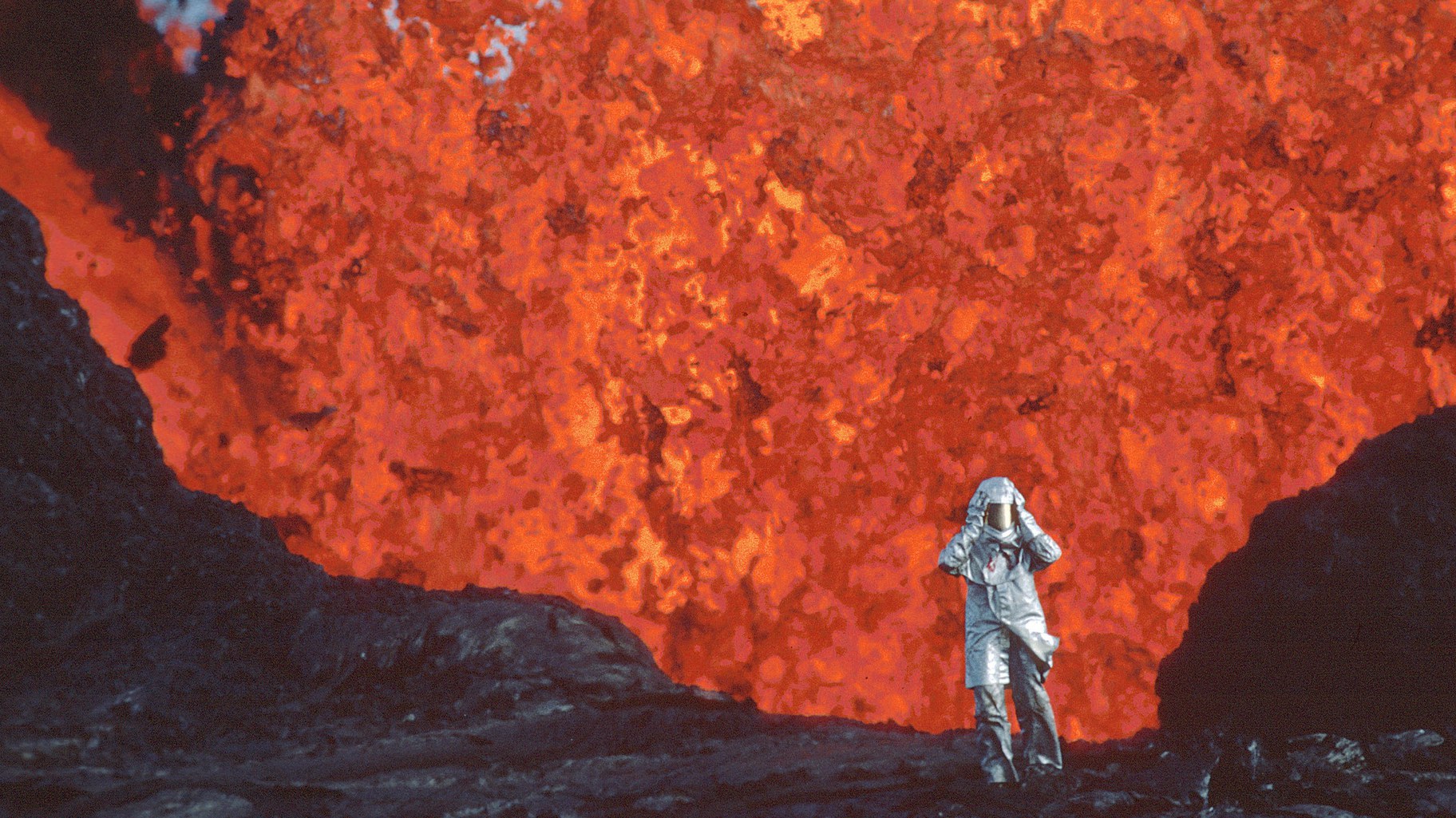 “They got so close to erupting volcanoes it is unlike anything we've seen before,” says filmmaker Sara Dosa. Katia Krafft wears a protective aluminized suit near a lava burst at Krafla Volcano, Iceland. Photo courtesy of Image’Est via National Geographic.

The French New Wave movement played an influential role in how Dosa and her team tackled the material for the documentary. Dosa says the stylistic influence “felt very organic and true to Katia and Maurice,” because they were already using it in their own cinematography and writings.

“[Their] writing was very playful and it kind of reminded us almost like the narration of [François] Truffaut,” she explains. “And [their] cinematography had all these playful snap zooms that a lot of people might associate with Wes Anderson today, but was very much kind of a hallmark of French New Wave then.”

Another theme present in French New Wave films is stories of love triangles. “For us, this story very much felt like a love triangle between Katia and Maurice and volcanoes” Dosa remarks. In fact, Maurice writes about this in one of his books: “For me, Katia and volcanoes, it is a love story,” which became the genesis point for Dosa to craft their story.

The Kraffts performed for the cameras

In order to finance their life adventuring around the world to study volcanoes, the Kraffts documented most of their explorations.

“They knew that if people could find them intriguing, then they themselves would become conduits to this wider world of volcanoes,” Dosa affirms. “And that was really a tremendous goal of theirs was to introduce the public to this phenomenal force that they themselves were so in love with.”

But in order to tell the best story, they performed for the camera, sometimes recording the same reaction or line repeatedly. “There's a shot in the film where [Katia] drags her hand across her brow and puffs up her cheeks and sighs loudly, and it's like she does that a few times,” Dosa explains.

Dosa says this repetition was their way to project and crystallize their essence to the world, in a type of “heightened truth.”

“They're really being savvy about how they're using the camera on their own storytelling to communicate the grueling nature of their work,” Dosa says, and “the key [here] is knowing that they themselves are characters, and that's something that they become quite good at.” 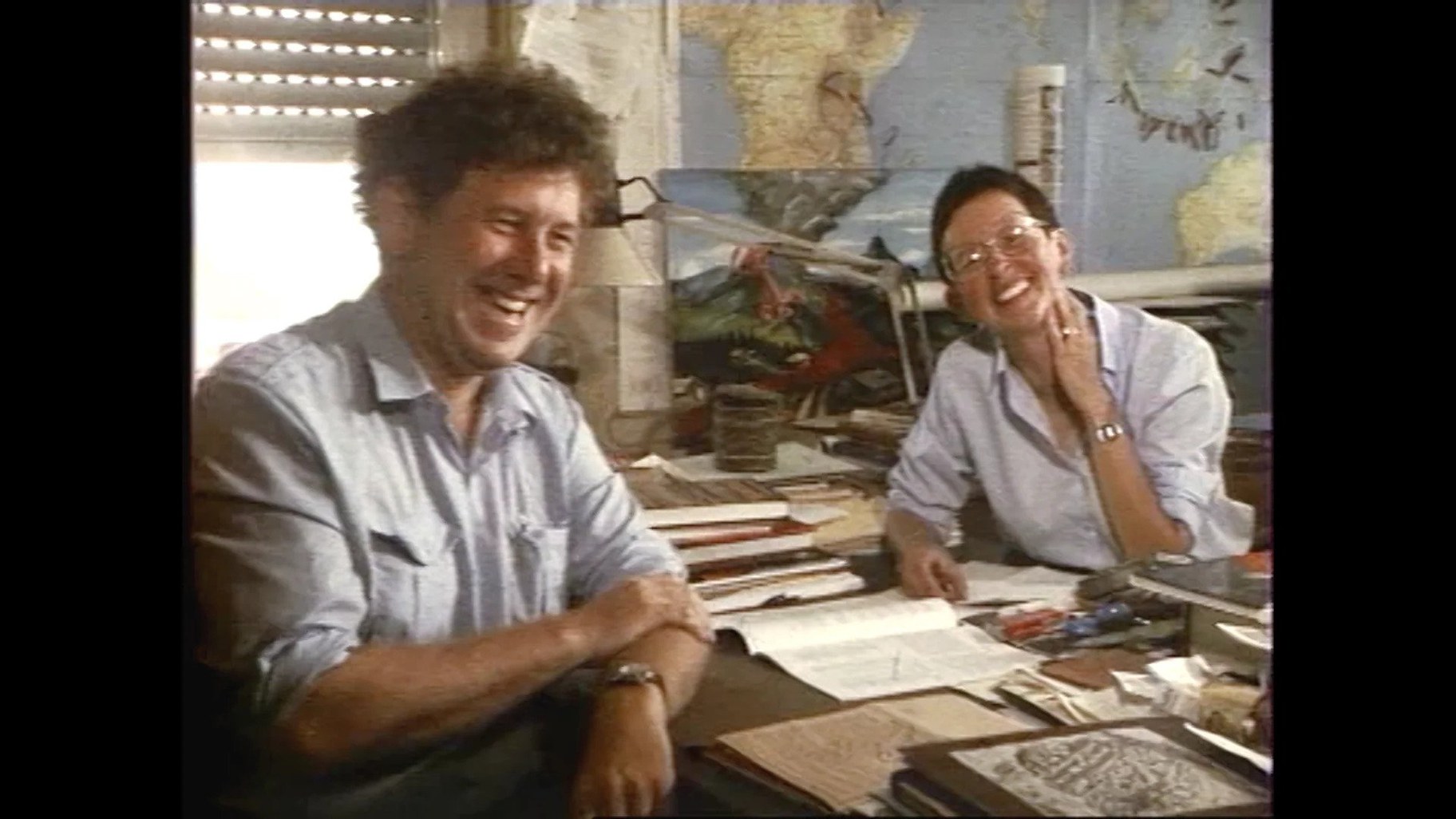 “They knew that if people could find them intriguing, then they themselves would become conduits to this wider world of volcanoes,” says filmmaker Sara Dosa. Maurice and Katia Krafft are interviewed in their home in Alsace, France. Photo courtesy of the Institut National de L'audiovisuel (INA) via National Geographic.

Taking ever greater risks in pursuit of their shared passion

Dosa believes the Kraffts’ knew the risks. Their volcanologist friend David Johnston died in the Mount St. Helens eruption in 1980. But it was only after the Nevado del Ruiz eruption in Colombia in 1985, which claimed more than 20,000 lives, that they started to use their imagery to understand pyroclastic blasts.

So, in the later years of their lives, they wanted to have their work in service of creating warning signals and evacuation plans for people who live at the base of volcanoes. And that was what they were doing the day they died.

For Dosa, Katia and Maurice harnessed the fear, and they had to reconcile with the idea of being afraid of doing their jobs in face of such a powerful force.

“Katia memorably says in the film: ‘Curiosity is stronger than fear.’ And that doesn't mean she didn't have it, but it means that she knew how to use her curiosity to overtake it, so to speak,” she remarks. “I am sure that they still had moments of fear, but they learned how to be in relationship with fear, I think in a profoundly different way than a lot of people who don't encounter such danger on a daily basis the way that they did.”

And in the name of science, they took ever greater risks to study and film volcanos in pursuit of their shared passion.

“They knew that if they lived the way that they wanted to, they would die in a volcano. But that was beautiful. That was perhaps the ultimate culmination of this love triangle to be one with a volcano.” 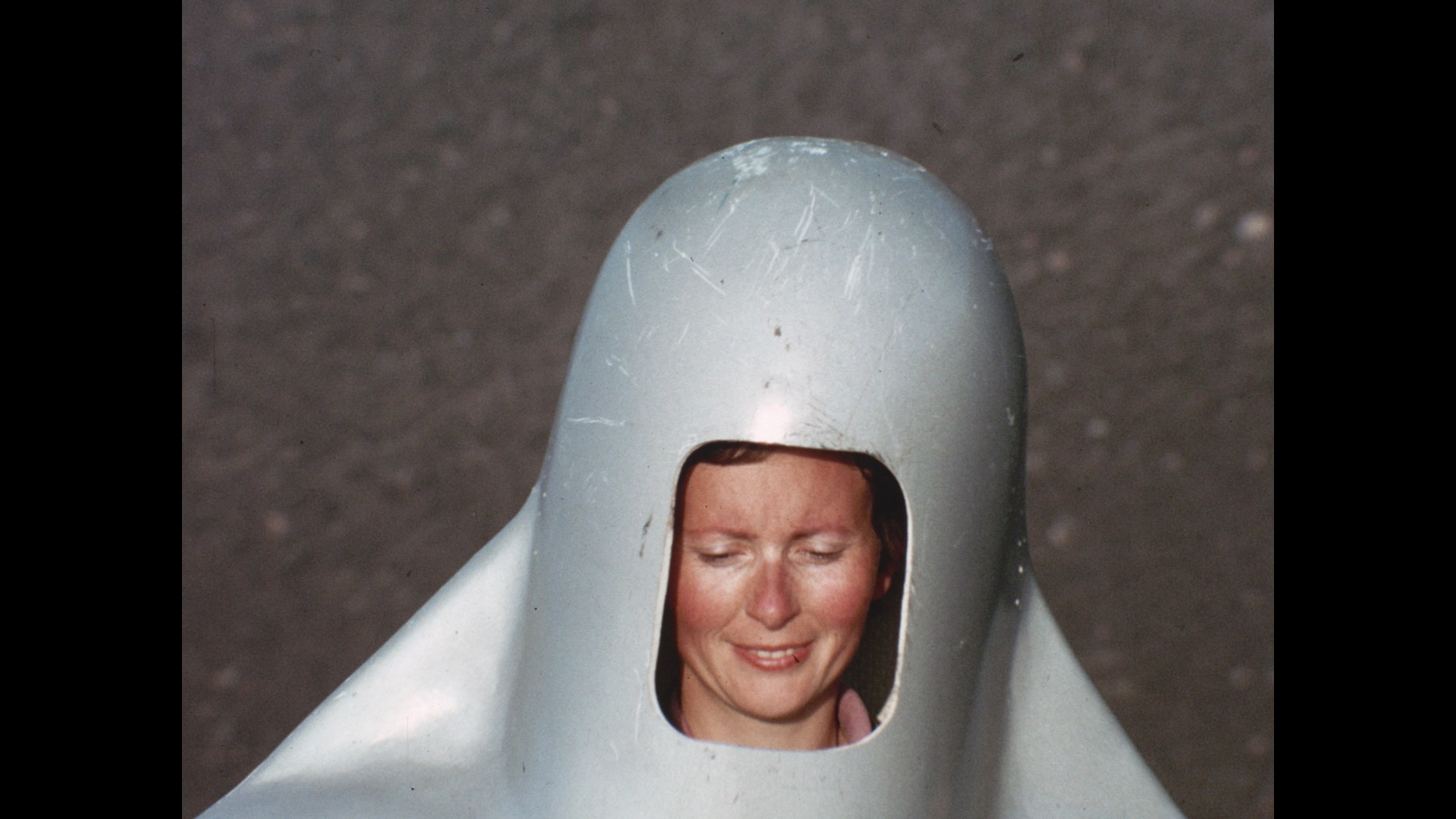 Katia once said, “Curiosity is stronger than fear.” Katia Krafft puts on a giant protective metal helmet on Mt. Etna in 1972.  Photo courtesy of Image’Est via National Geographic.

Sandbox Films funded “Fire of Love,” and National Geographic Films and Neon Films are now distributing it to theaters across the country. It will stream on Disney+ in the fall.