Actress/writer/director Julie Delpy talks with The Business producer Darby Maloney. Delpy has received her second Oscar nomination, together with Ethan Hawke and Richard Linklater, for writing. The three co-wrote Before Midnight, the third in their "Before" trilogy, which includes Before Sunrise (1995) and Before Sunset (2004). Many assume these films are improvised, but Delpy insists they're written and that she and Hawke don't change a word once shooting starts. Delpy confesses that for years she wanted to be a writer but many discouraged her -- including Sam Shepard. It was her work on Before Sunrise that restored her confidence. Now she's been writing and directing her own films. Delpy talks about getting financing from Europe for those movies and her reasons for living in Hollywood. 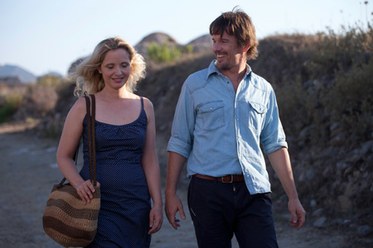 Julie Delpy and Ethan Hawke on the set of Before Midnight
Photo by Despina Spyrou, courtesy of Sony Pictures Classics