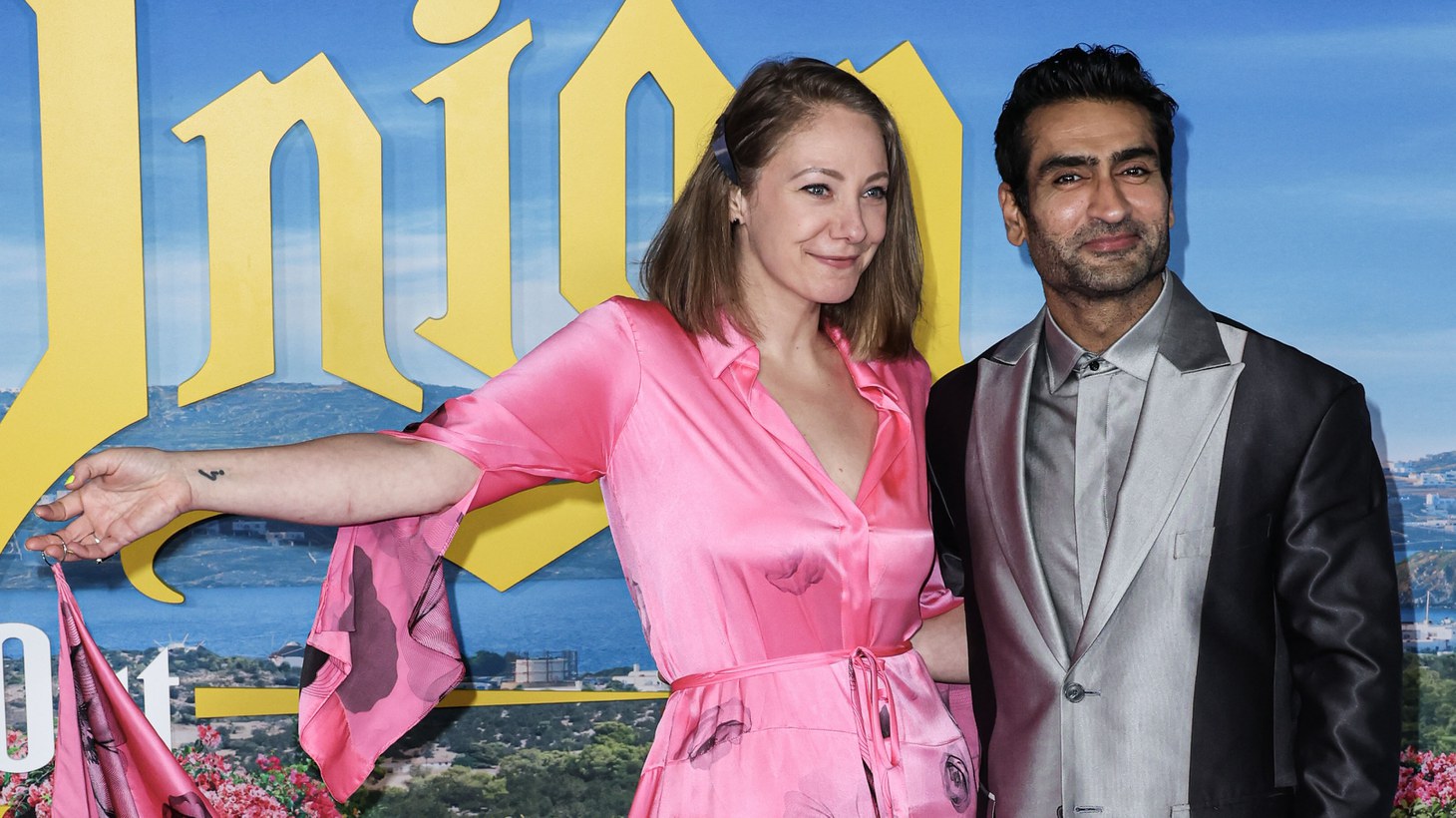 Emily V. Gordon and Kumail Nanjiani arrive at the US Premiere Of Netflix's “Glass Onion: A Knives Out Mystery” held at the Academy Museum of Motion Pictures in Los Angeles, on November 14, 2022. Photo by David Acosta/REUTERS.

Pakistani actor, writer, and stand-up comedian Kumail Nanjiani’s career has been an evolution. At Grinnell College in Iowa, he enrolled to study a double major in computer science/philosophy because public speaking was a “big issue” for him.

But in his first year, he registered for a class called “Story, Storytelling and Audiences” at which he had to write a story and at the end of the semester and perform it in front of the class. “I took that on purpose because I knew I needed to break out of this sort of shell of fear that I built around myself.”

Though the school had a theater program, he was not involved in it at all because he was bashful.

“I always say that I wasn't a person until I got to college. I was just sort of in defense mode the entire time, just trying to make yourself smaller and invisible,” he reveals. “It was in college, when I first started sort of finding out that I was funny.”

After finishing his degree, he moved to Chicago, then New York City to pursue stand-up full time.

In part two of this conversation, Nanjiani discusses his versatile actor’s resume: a path that took him from being a very shy kid, to doing stand-up in Chicago, to getting nominated for an Oscar for “The Big Sick,” to transforming into his darkest character in “Welcome to Chippendales.”

Acting to skip class, and a famous high-school classmate

Najiani says his only brush with the stage before doing stand-up was in high school, when he played a guard in a production set during the Mughal Empire (1526-1857). He did it to skip class. But on the day of the performance he was so nervous that he had a wardrobe malfunction.

“I noticed I was wearing my glasses. This was our version of the Starbucks cup in ‘Game of Thrones,’” he remarks. “It did not help keep me invisible.”

At that time, he was also a fellow classmate of Oscar-winning director Sharmeen Obaid-Chinoy. Though he knew of her, they were not friends.

When he got nominated for an Oscar for Best Original Screenplay with his wife, Emily V. Gordon for their movie “The Big Sick” years later, people asked him if he was the first Pakistani to receive the honor, to which he replied, “I'm not even the first one from my graduating high school class.” Obaid-Chinoy has won the accolade twice.

Once Nanjiani finished college, he moved to Chicago and went through the comedy ranks. His first three years were good and he started developing a routine at open-mic events. Then, his writing stagnated.

“I was in a rut, definitely, and I wasn't really thinking about my future in any way,” he recalls. That’s when he met his future wife.

As they started dating, she got sick and fell into a coma for eight days. But within two months of her waking up, Nanjiani and Gordon got married.

“It really sort of kicked us into gear in a very unconscious way,” he observes. “We did not think, ‘Oh, my God, life is fleeting, it can all be taken from us, so we have to strike while the iron is hot.’ It was from that crisis [that we wanted] to change our lives.”

Nanjiani quit his day job in Chicago and moved to New York with Gordon so he could pursue stand-up and acting. For several years, he appeared on dozens of TV shows, including “Veep” and “The X-Files,” voiced characters in animation, such as “Adventure Time,” and performed on several comedy movies.

In 2017, he executive produced and starred in the loosely autobiographical, romantic comedy “The Big Sick,” in which he also co-wrote with his wife. “It wasn't until years later that we can look back and say, ‘Wow, we just really took a whole bunch of risks, so clearly, there was a lot going on,’” he says. “Then, revisiting all that stuff in writing ‘The Big Sick’ was another step in growing up.”

Nanjiani plays a fictionalized version of himself and Zoe Kazan (“She Said,” “The Deuce”), acts as his wife, renamed Emily Garnder in the film. In “The Big Sick,” as in life, Nanjiani and Gordon dated briefly before she got sick and was placed in a medically induced coma, while he, along with her parents, didn’t leave her side. The film also stars Holly Hunter, Ray Romano, Adeel Akhtar, and Anupam Kher.

“What's depicted in the movie, that I sort of hung out with [her] parents for that entire time, that's completely true,” he affirms. “I don't know how we got through those days. I think you do step-by-step: It's time to wake up, so you wake up. It's time to have breakfast, you have breakfast, and you go to the hospital. You're there all day and at night. If you're tired, you go to sleep. You just sort of do whatever is right in front of you.”

It was Nanjiani’s first lead role in a movie, and though he was playing a version of himself, he was still trying to figure things out.

“‘The Big Sick’ was the first real acting job I had done that wasn't just comedy that required me to do more than just try and get laughs,” he notes. “The entire time, I felt like I was in a barely functional form of crisis. I felt like I was continuously clutching at straws.”

While he felt a certain level of comfort with the story, it was also very stressful.

“The idea that we were telling our own story, we knew nobody else [had] this story, so we have to tell it, and if we mess this up… nobody else is going to come and fix this for us. We have one shot at it, so that was a lot of pressure,” he recalls. “Then just trying to recreate moments from your own life was intimidating. I felt like I owed it to Emily and us to do a good job of it.”

The film won a Movie of the Year award and was named one of the top 10 of 2017 by the American Film Institute. It was also nominated for the Academy Award for Best Original Screenplay, and became the third highest grossing independent film that year, making over $40 million domestically.

A very different type of performance on “Silicon Valley”

Between 2014 and 2019, Nanjiani played a very different type, a computer engineer Dinesh Chugtai in “Silicon Valley.” The half-hour comedy about characters “stuck in the same place,” won two Emmys and several other awards.

“There's sort of that the formula of comedy [that] works, the comedic performers in a piece like that works, everybody stays the same,” Nanjini says, and points out “Seinfeld” as a good example of this template where there’s no growth, no change.

In “Silicon Valley,” he occupied a “tiny little space” in an ensemble where he “just [stayed] in that mode over, and over, and over, [so]  it [was] a narrow spectrum of performance in that, for me at least.”

After finding success in comedy, in 2021 Nanjiani jumped into the Marvel world by playing Kingo on “Eternals,” his biggest role and his first action character. With his previous characters in “The Big Sick” and “Silicon Valley,” he would get so nervous, he would almost get paralyzed. But when he got to the set of “Eternals,” he realized he needed to change the way he approached work.

And being directed by one of his idols Chloé Zhao (“Songs My Brother Taught Me,” “The Writer,” “Nomadland,”) while knowing the Marvel movies, also made it easier for him to portray the cosmic-powered, genetically engineered member of the Eternals.

“I've been watching these movies since I was a kid, so I sort of knew these movies in my bones,” he explains. “And I knew the MCU movies, [so] going into it, I watched a bunch of them again to sort of get the tone right.”

Adding all those elements, he says he had “a great time” working on the film.

“Going into Marvel I was like, ‘This is by far the biggest thing I've done, and I am just going to have fun no matter what. And I really, really did. I had fun every single day,” he adds. “I had the best time of my life!” 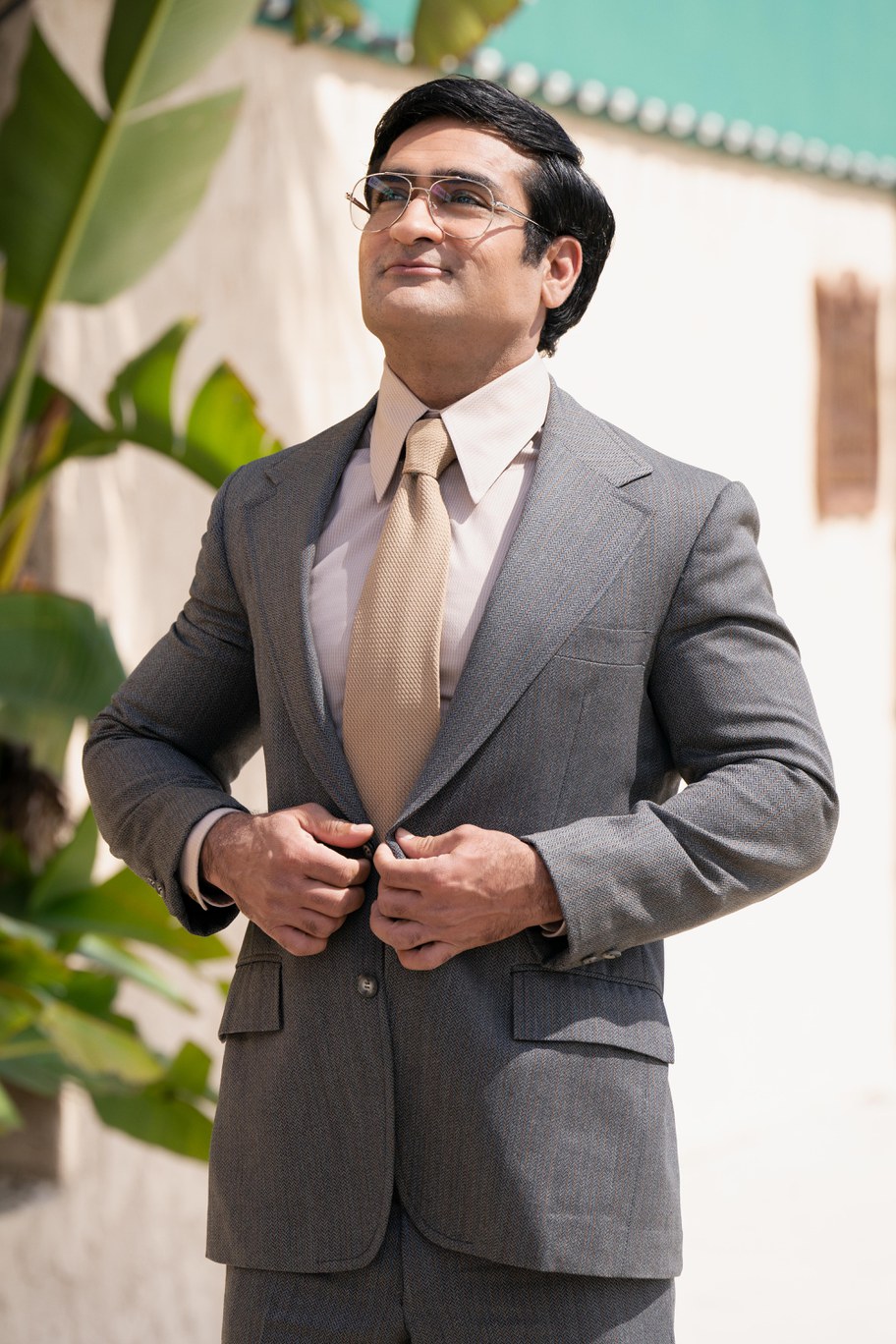 “Every season of ‘Silicon Valley’ in the beginning, I would get really, really nervous, and I am getting a tremendous amount of satisfaction from my job, but I don't know if I'm deriving enjoyment from my job,” says Kumail Nanjiani, who’s now playing the dark entrepreneur Somen “Steve” Banerjee on “Welcome to Chippendales.”

Playing his darkest character, yet

In his latest project, Nanjiani is starring in the drama series, “Welcome to Chippendales,” in which he’s playing his darkest character yet. The series chronicles the rise and fall of the founder of the famous male strip club, an immigrant from India and entrepreneur Somen “Steve” Banerjee, who started up just hoping to make it in America, but who ultimately made one bad choice after another.

Robert Siegel, its creator, originally conceived and presented the idea as a film to Nanjiani at “The Big Sick” premiere.

“Suddenly, I'd gone from really fighting to get like one scene in a movie in a comedy, to suddenly having more opportunities presented to me,” Nanjiani says. “[Siegel’s] Chippendale’s script, which was very good, was specifically intimidating to me because I was playing a type of character that I hadn't played up to that point.”

Though Nanjiani was a big fan of Siegel’s work and was flattered by his proposal, he felt that taking on a fully dark and dramatic role was very intimidating. At that time, he hesitated, taking him years to sign on to the drama.

“I told myself different reasons for saying ‘No’ at that time, for passing on it, but really, it was fear. I was like, ‘I don't know, if I'm ready to tackle a real character piece like this, playing someone who is very different from me, rather than playing a version of myself,” he explains. “So, I told Rob that I wasn't the right guy for it back then.”

He finally agreed to it, and the series is now playing on Hulu.

Read and listen: Part 1: Kumail Nanjiani on ‘Welcome to Chippendales.’