Nate Bargatze's father is a magician, and Nate was always excited to help out as an assistant at his shows. But, as he would later learn, not all magical assistants are created equal, and some are better than others at keeping the mystery alive, and not everyone is invited back for an encore.

Nate Bargatze is a comic who's appeared on Late Night with Conan O'Brien and the Tonight Show with Jimmy Fallon. His one-hour stand-up special, Full Time Magic, was recently broadcast on Comedy Central. 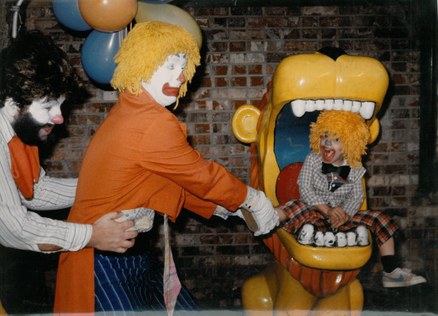 Nate and his father
Courtesy of Nate Bargatze

Ricky Jay tells the story of the Bottle Conjurer. In London of the mid-18th century, hundreds of spectators filled the Royal Haymarket Theater to see an amazing feat: a man...

The Secrets of Sycamore School

Japanese teenagers Aki and Hyuma fly to Los Angeles to learn magic from one of their favorite living magicians, Shoot Ogawa. But when they arrive, they discover that the...

Nate Bargatze's father is a magician, and Nate was always excited to help out as an assistant at his shows. But, as he would later learn, not all magical assistants are...