Finally… Vicki Juditz is excited to attend a fancy dance party with her new boyfriend. The party ends up being more fussy than she was expecting, so she feels out of place. Luckily, there's an open bar, so Vicki commences to try and have a good time. Her idea of a good time gets in the way of her boyfriend's work function, and she has a life-altering moment next to the parking valet.

Vicki Juditz has performed hat festivals and theaters across the country, including the National Storytelling Festival in Tennessee. Los Angele audiences have cheered her on at the Moth StorySLAMS and GrandSLAMS. In a former life, she performed comic roles on shows such as Coach, Everybody Loves Raymond and My Name Is Earl, and sold everything from birth control pills to cat beverages in TV commercials. 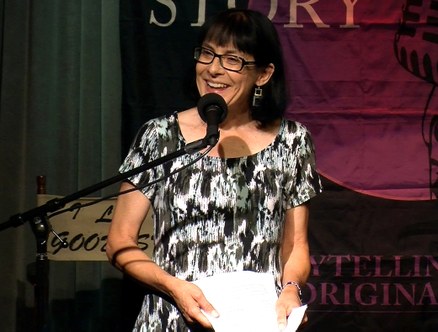 My Life of Crime

Can't Rewind the Past

A short but action-packed story produced a few years ago, but worth hearing again (and again.) A street criminal, hoping to "curb his wild ways," spots an opportunity he...

Finally… Vicki Juditz is excited to attend a fancy dance party with her new boyfriend. The party ends up being more fussy than she was expecting, so she feels out of place....