It's a big day that many parents dread… when teenage girlfriends and boyfriends start to get physically close enough that maybe some parental advice and guidance is needed, as uncomfortable it is for everyone concerned. Jon Cryer grew up with a an extremely busy single mom who found herself in that very situation at a particularly bad moment; so she had to improvise.

Jon Cryer is an Emmy award winning actor who co-starred on the CBS sitcom Two and a Half Men for 12 seasons. He has performed in film, television and on stage for over 30 years. H's written a book about his life and career called So That Happened: A Memoir.

His mother, Gretchen Cryer, is the author of the tremendously successful musical, I'm Getting My Act Together and Taking it on the Road. Her updated version, I'm Still Getting my Act Together, will be playing at the Laguna Playhouse in Laguna Beach all through October. 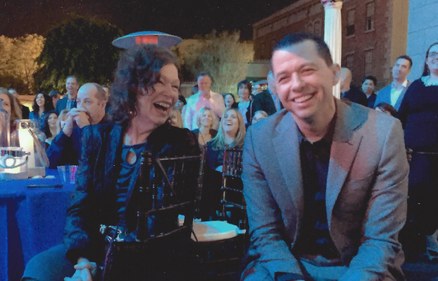 Jon Cryer and his mother Gretchen
Courtesy of Jon Cryer

It's a big day that many parents dread… when teenage girlfriends and boyfriends start to get physically close enough that maybe some parental advice and guidance is needed,...

A Wedding in Baghdad

Nadia traveled a long way to attend a family wedding… all the way to Baghdad, Iraq… in 2003! It was a time and place where nothing about a wedding could be expected to go...