After a day of fasting, LA’s muslims gather and break bread for Iftar It sounds like a typical weeknight at the home of Jihad Turk and Anjum Mir.

The couple have braved rush hour and returned to their West Los Angeles home from work; Mir is an early childhood educator. Turk, an academic.

Two of their four children pour out of the family minivan, school backpacks and violin cases in-hand. Then, there is the usual squabbling about dinner: who is going to pick up what and how long to cook the salmon.

For many Angelenos, this sounds familiar. But the difference this evening is that Turk, Mir and their family have not eaten for almost 15 hours.

“This is what our religion is all about,” says Turk, who is the President of Bayan Claremont, an Islamic graduate school outside of Los Angeles. “To feel that empathy for those who are hungry… and to deal with the challenges of life even while you're maybe grumpy, tired, exhausted and lacking some blood sugar.” 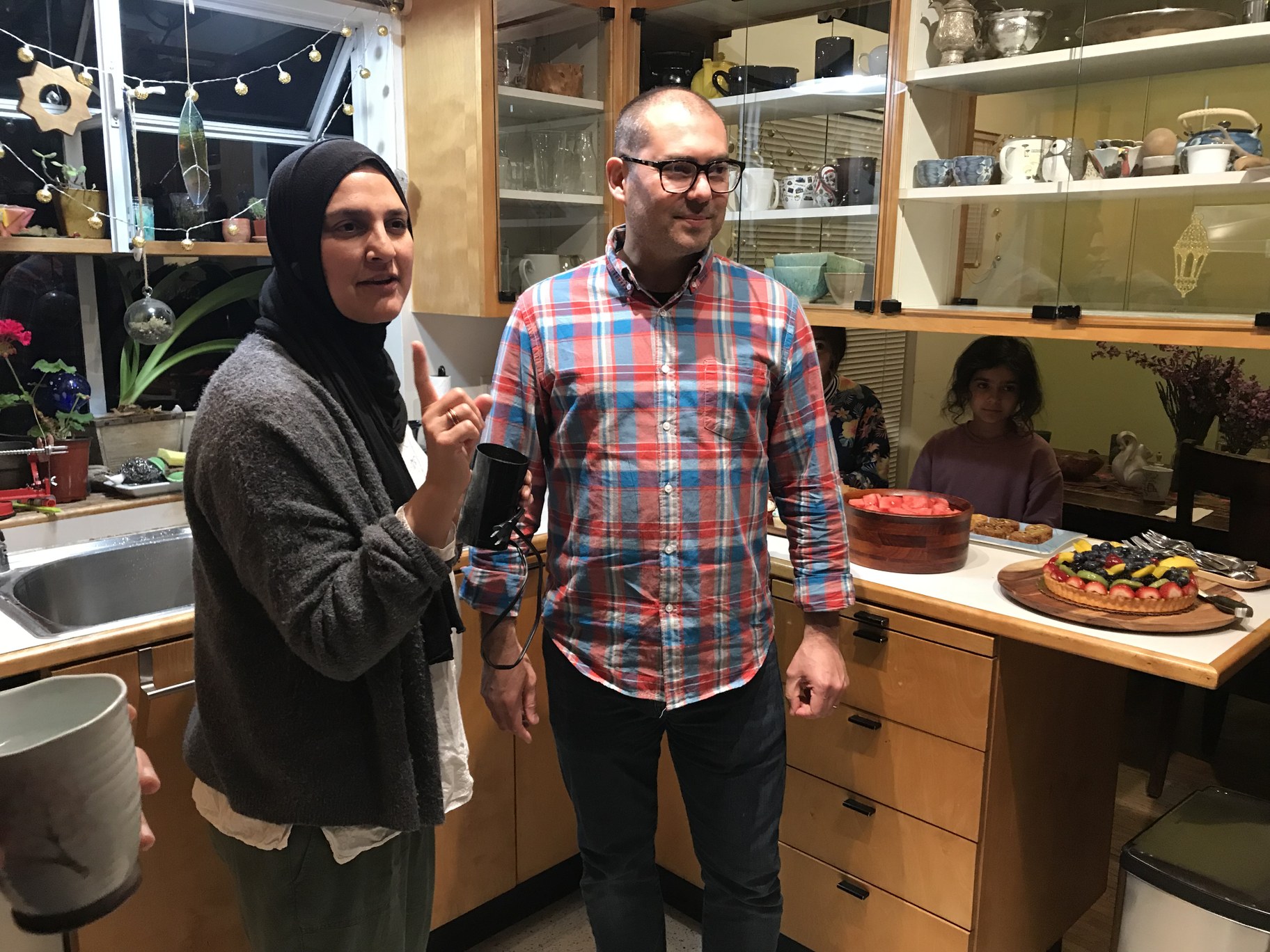 Anjum Mir and her husband Jihad Turk joke with their guests at their home in West Los Angeles after iftar, the evening meal where Muslims break their daily Ramadan fast at sunset. Photo by Benjamin Gottlieb

The Muslim holiday of Ramadan is in its last week. For many of the estimated 500,000 Muslims in Southern California, this means an end to nearly four weeks of fasting.

But celebrating one’s faith in a city that is seemingly apathetic to the challenges that fasting presents is not always easy.

“Growing up it was very different because most of our mothers in our community were all stay-at-home moms,” Mir says, as she sautées green beans for more than a dozen people. “So it was inconceivable that you would be preparing a meal while your guests were there.”

However, her experience is different.

“I am wearing my work clothes. Somewhere on here, I have like dough and honey butter and bread, which my students were eating today in my class. And I stopped at three different places on the way home and I called Jihad and said pick up this, this, and this… it's very different.”

When all of their guests arrive, and the sun sets, Turk taps one of his colleagues to deliver the call to prayer.

The whole home - men, women and the older children - gathers to pray. 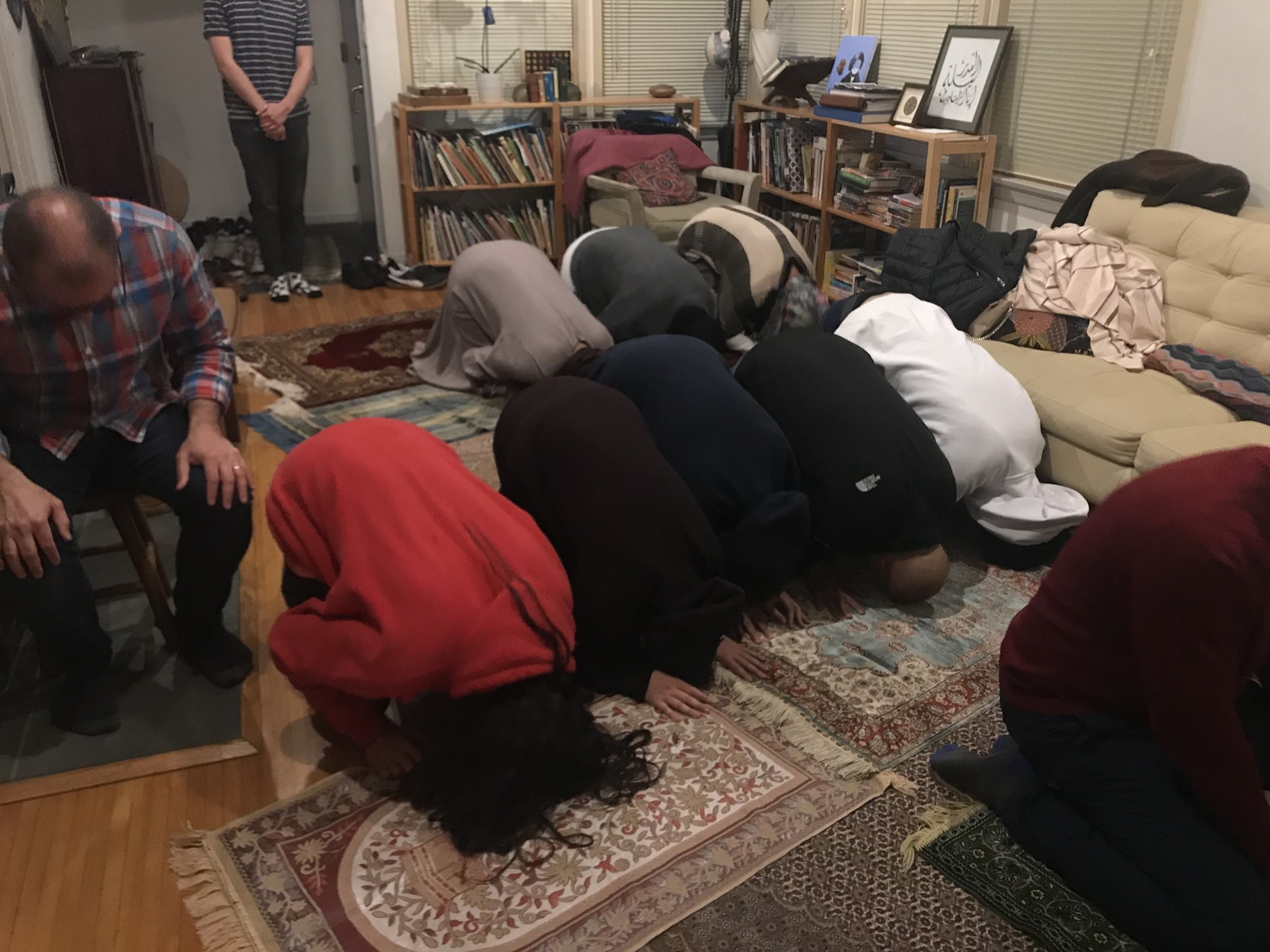 Jihad Turk (far left), two of his sons and guests kneel in prayer before they break their daily fast during Ramadan. Photo by Benjamin Gottlieb)

“I particularly look forward to Ramadan because as someone whose name is Jihad I'm a little bit of a walking teaching moment,” says Turk. “I would say for the spiritual life of the Muslim, this is the juice. This is what our religion is all about.”

After prayer, it is time to finally break the fast. Huge pieces of salmon, green beans and salad, grape leaves, both vegetarian and not, and a big portion of mujadara, a Middle Eastern dish of rice and lentils make the rounds.

And then there is dessert: baklava, fresh fruit and a big fruit tart. 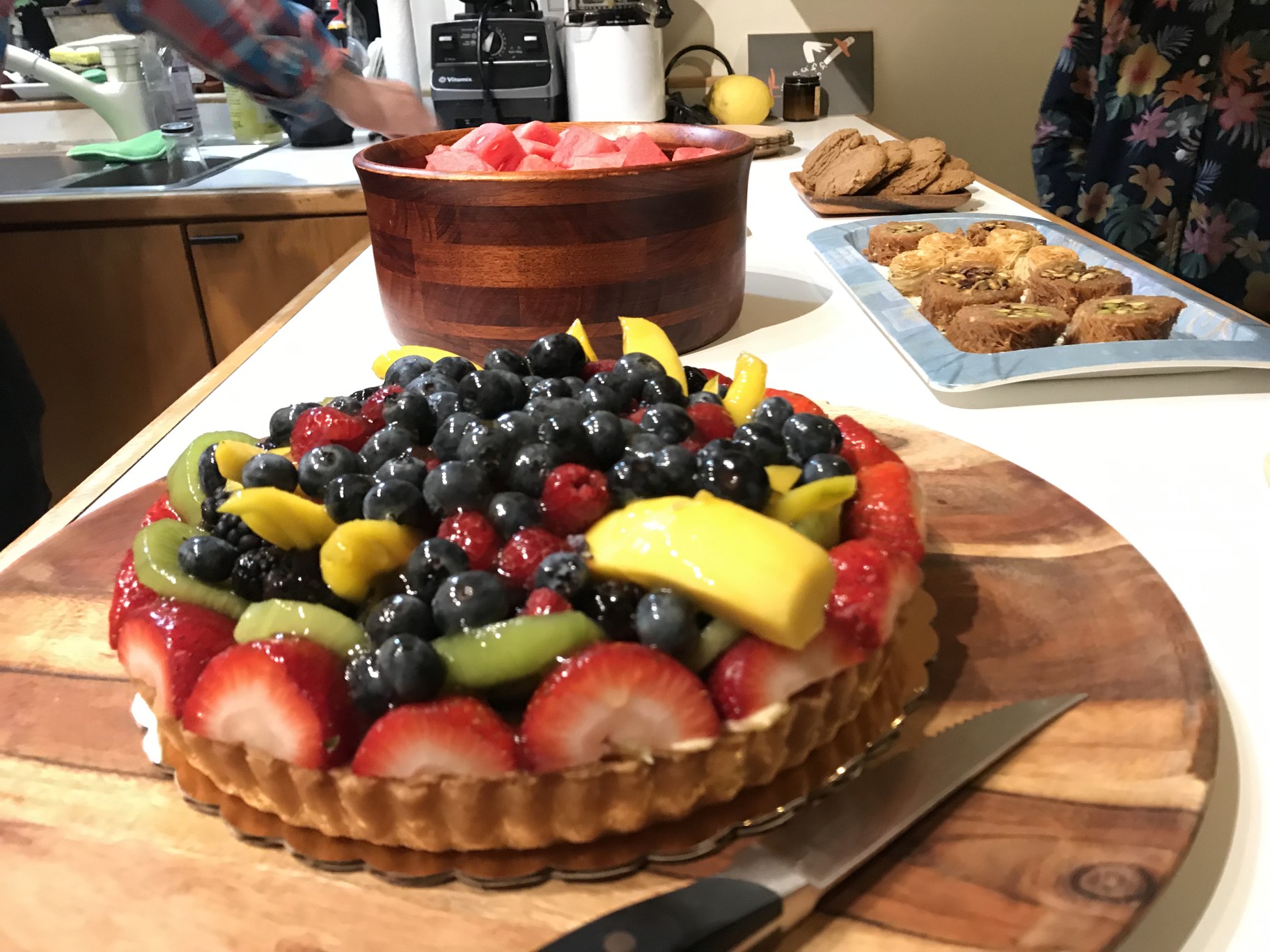 The dessert spread at the home of Jihad Turk and Anjum Mir in West Los Angeles. Photo credit by Benjamin Gottlieb.

As the evening winds down, the wives gather in the living room to chat; the husbands in the dining room over cups of tea.

For Turk, he says, this is his favorite time of year.

“Ramadan is finally a chance throughout the year where the focus is not on some conflict or controversy but on the aspect of religion that is most meaningful to us,” he says. “You know, just that connection to God and trying to be a better person.”

After sunset, LA’s muslims gather to break their Ramadan fast

After a day of fasting, LA’s muslims gather and break bread for Iftar

It sounds like a typical weeknight at the home of Jihad Turk and Anjum Mir.

Disney, Netflix, others may boycott production in Georgia if abortion law passes

Another major studio is reconsidering its production in the state of Georgia, in the wake of a new near full-abortion ban law signed by the governor. The law would make...

With its beautiful beaches and gated estates, Santa Barbara has an unsightly problem: too much trash, and not a lot of room left to bury it. The local dump is filling up,...

Elon Musk to drill tunnel in Vegas. What does that say about his plans for LA?

The Las Vegas Convention Center is undergoing a major overhaul. It agreed to pay $48 million for Elon Musk and his firm the Boring Company to drill a test tunnel under it,...