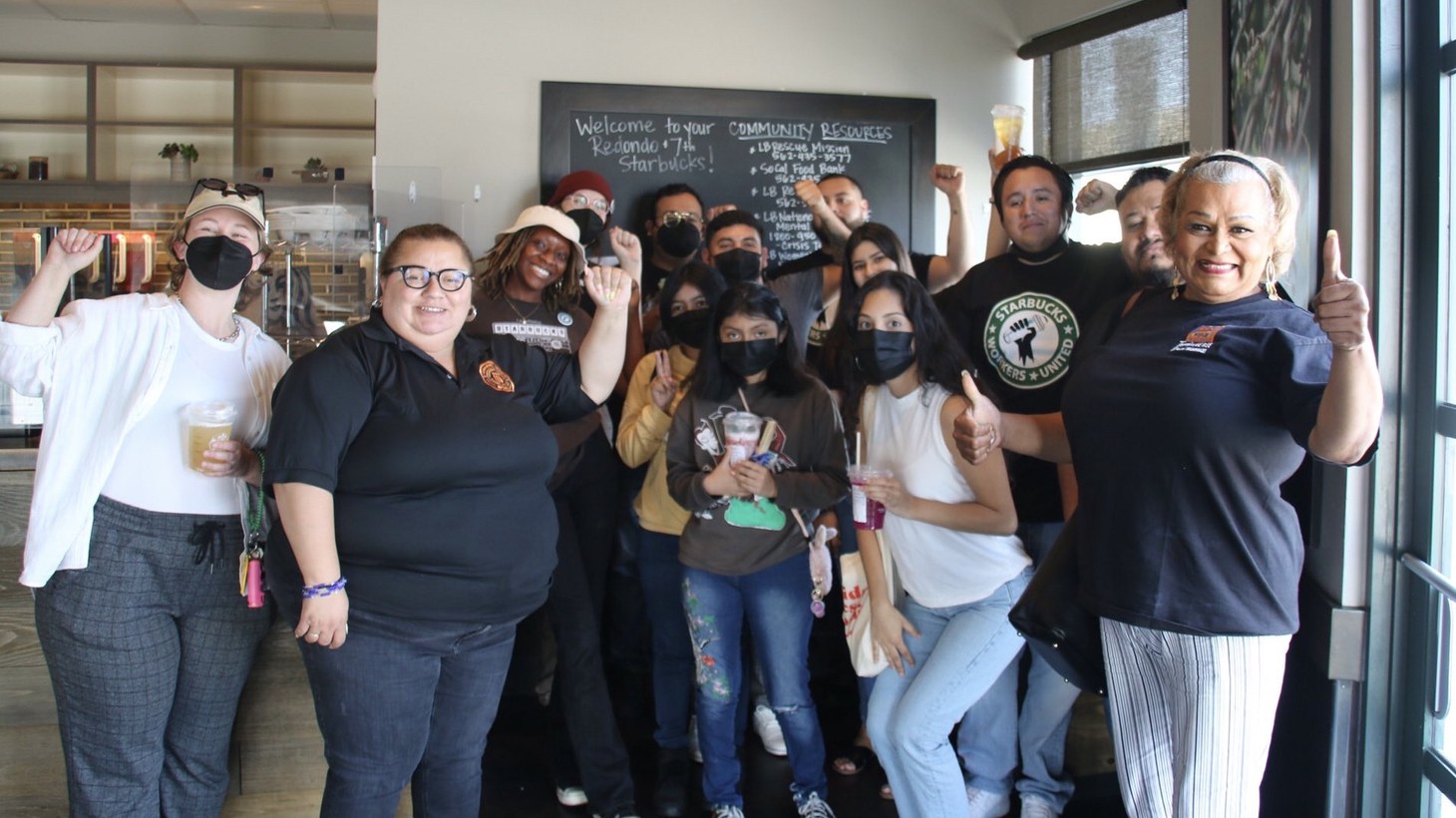 Baristas at a Starbucks in Long Beach pose with customers who support their union campaign. Employees at the store have until May 13 to cast their ballots. Photo by Josie Serrano.

When Tyler Keeling got hired as a Starbucks barista in Washington six years ago, he thought he’d struck gold making $13 an hour. He liked that the coffee shop felt like a community. He had health care, and if he wanted to go to college, Starbucks would pay for it.

Then the pandemic hit. The risks he faced at work increased. Business boomed and drink orders stacked up. When he expressed concerns, he didn’t feel listened to.

“I just got really worn out on every level of my existence to the point where  … I didn't really have a personal life anymore,” he says. “I just stopped feeling like I had a place in the company, other than being exploited.”

Now the 26-year-old barista is leading a union drive at his Lakewood store. He and his co-workers – called “partners” by Starbucks – are voting on whether or not they want to join Starbucks Workers United, a union with growing membership across the country. If a majority in Keeling’s store votes in favor of the union, the store and another store in nearby Long Beach will be the first in Southern California to unionize. Employees have until May 13 to cast their ballots. 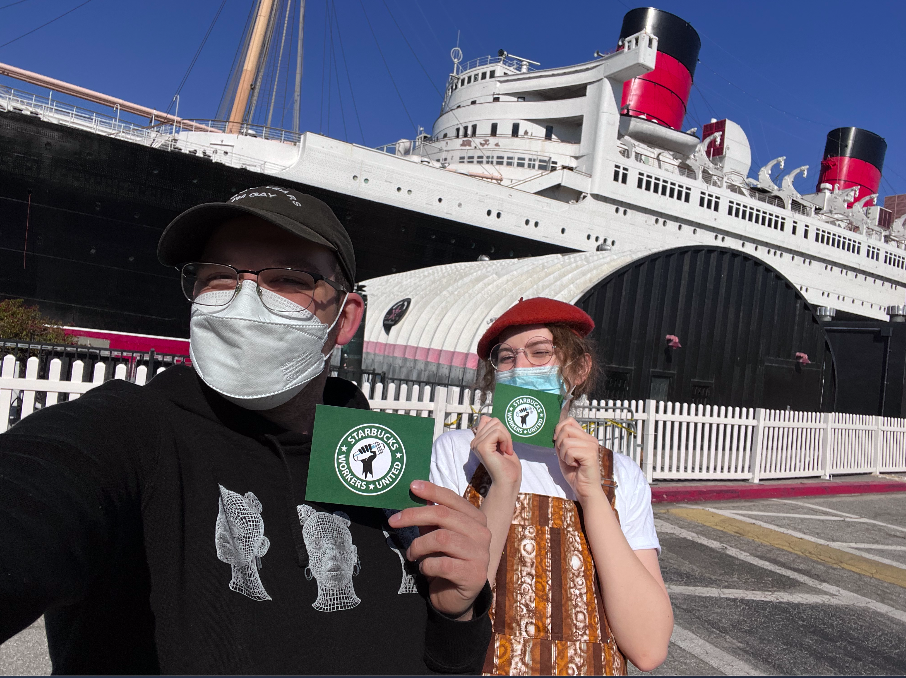 Baristas Tyler Keeling, left, and Josie Serrano, right, pose with their union authorization cards on March 7, the morning their Starbucks stores filed petitions to unionize with the National Labor Relations Board. Photo by Tyler Keeling.

The Starbucks unionization wave started last fall, when baristas at three stores in Buffalo, N.Y., filed petitions with the National Labor Relations Board (NLRB) to unionize. Two campaigns were successful. The third failed after what John Logan, professor of labor and employment at San Francisco State University, calls “an enormous anti-union campaign” by Starbucks Corporation. In November, interim CEO Howard Schultz came to Buffalo to talk baristas out of unionizing.

Starbucks also hired Littler Mendelson, one of the largest management-side employment law firms in the country, to beat back the union wave. “Littler – since its founding in the 1940s – has always specialized in going up against unions,” Logan says.

A spokesperson for Starbucks, speaking to KCRW on the condition that she not be publicly identified, confirms: “We've been clear in our belief that we are better together as partners without a union between us, and that conviction has not changed.”

Baristas at Starbucks shops in California and New York tell KCRW the company has been posting anti-union messages in employee break rooms and holding required meetings, where – workers say – managers are using ambiguously threatening language to dissuade them from unionizing.

“Somebody maybe from management will come in and say, ‘Hey, it's a possibility that if you vote for the union, you won't be able to transfer stores anymore,’” says Josie Serrano, a Long Beach Starbucks barista and union organizer. “Then some partners will be scared and be like, ‘Wait, I didn't know that.’ And it's actually not true.”

The corporation is struggling to defeat the movement. Months after the first win in Buffalo, more than 250 Starbucks have filed their own petitions to unionize. Baristas in more than 45 stores have already held elections, and in all but two stores, workers have voted in favor of the union.

Logan says the unionization wave is powered by baristas disillusioned by work during the pandemic. Revenue for the Starbucks Corporation shot up 24% from 2020 to 2021, where it teetered near $30 billion. Meanwhile, baristas toiled away with little to show for it.

“For two years, their jobs have gotten harder, more stressful, more dangerous. They don't feel that they've been rewarded adequately, in many cases they don't feel that they've been treated with respect,” Logan says. “They view getting an independent voice – getting a seat at the bargaining table – through Starbucks Workers United as a way of gaining that respect and getting just treatment at work.”

The swell of Starbucks shops unionizing across the country mirrors recent data from the NLRB showing that the number of union petitions filed in the first half of 2022 increased from the same time period last year by 57%.

At one Starbucks store in Long Beach, barista Serrano, 28, says they got their coworkers on board by engaging in deep conversations about what unions are and whether they could benefit from one. Those talks occurred between shifts and after work at Ma and Pa, a grocery store in Long Beach with an outdoor patio large enough to host the coffee shop’s workforce.

“We didn't really want to go to anybody and say, ‘Hey, we're unionizing. This is why this is what we need you to do.’ We really tried to get as many partners as we could in our stores to go out to lunch,” says Serrano. “We really wanted to make sure that we were friends first, and union planners second.”

Serrano says Starbucks' anti-union campaign is not working at their store. “Whatever Starbucks gives us, a lot of us – we're just like, ‘Okay, this is taken with a grain of salt immediately.’”

Logan says the corporation doesn’t understand its employees, who skew young and progressive.

“Some of them have been politicized, long before the union campaigns, by participation in Black Lives Matter, participation in MeToo, the environmental justice movements, Bernie Sanders’ presidential campaigns. They're young workers who are very politically aware,” Logan says. “A union message resonates with them, and they're taking the lead in these campaigns.”

The Starbucks spokesperson won’t comment on the corporation’s strategies for defeating the union effort, but last October, as the union drive heated up in Buffalo, the corporation announced a $1 billion infusion into employee wages, raising the average hourly pay to $17 an hour.

Keeling doesn’t deny that a meaningful raise would be great, but he says the company is missing the point.

“A good workplace is just a snapshot in time,” he says. “You could work at the best store in the world. … You could love your job and every aspect of it. And in six months, some policy changes, and your work life is suddenly the worst thing it can be. Right? What's preventing that change?”

Real “partners,” Keeling says, have a voice. A seat at the table. And to him, that means a union.