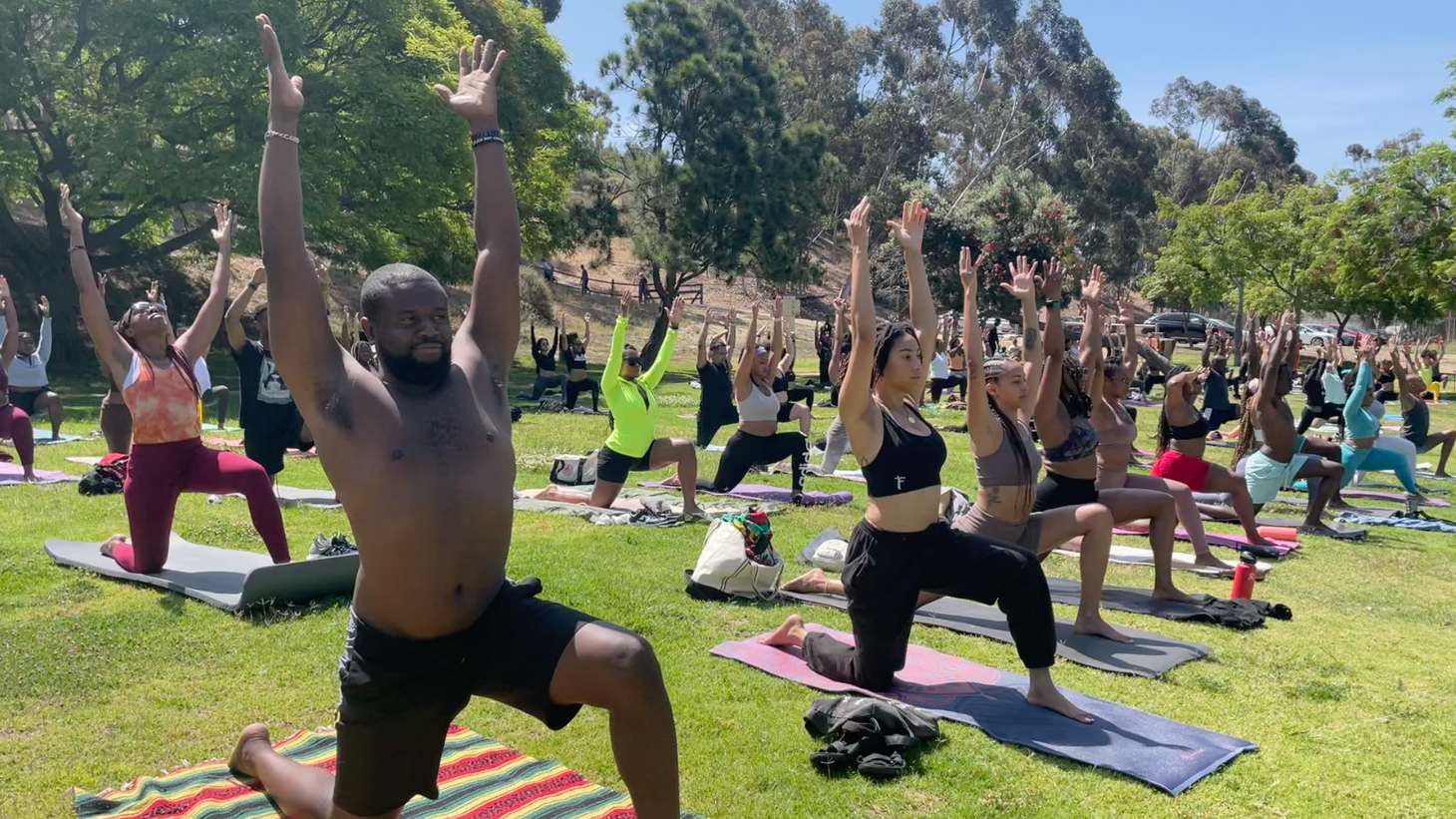 Lenny Gaiter (left) started coming to WalkGood LA yoga classes when they started two years ago, after he learned it was part of a local racial equity movement. The free classes attract hundreds to Kenneth Hahn State Park each week. Photo by Megan Jamerson/KCRW.

A free yoga class that draws hundreds of participants weekly to Kenneth Hahn State Park isn’t just about fitness and having a good time. It evolved from a protest in 2020 against Black lives lost to violence, and now offers a safe healing space for people of color.

“It's just a sea of beautiful Black and Brown people,” says Marley Ralph, one of the organizers of the event that typically draws over 200 people.

While many other groups that formed after the murder of George Floyd have petered out,,this racial justice and wellness movement led by Ralph and her cousins remains a consistent presence two years later.

“I think we've been able to culturally shift what yoga looks like, what healing looks like, in regards to Black and Brown bodies,” says Etienne Maurice, Ralph’s cousin and the founder of these events. “Because you can't be what you can't see.”

The classes began in June 2020 when Maurice, a film producer with no previous experience organizing, put together a protest run in memory of Ahmaud Arbery. Ralph, a yoga instructor, was there to help when over 400 people showed up.

Ralph remembers Maurice asking her to lead some stretches before the run, and as she did so, “it was just an amazing thing,” she says. “It felt like chaos in that month. Things were popping off every single day, and you just didn't have any kind of moment to take a pause. But [during the stretches] I looked around and people were silent, had a moment of just silence, of just breathing, of just existing. And I think that we all felt what that felt like, of having a pause amongst all of this chaos.”

For the next 10 weeks that summer, they protested on Saturdays and did yoga on Sundays. Now, says Ralph, the yoga has become “our form of protest.” 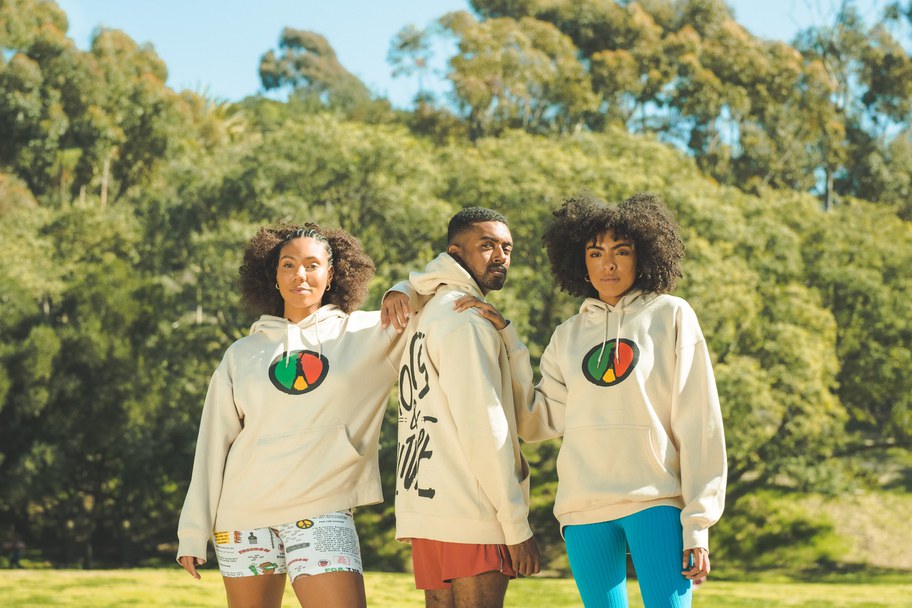 The cousins decided to call their movement WalkGood LA, which offers free yoga, runs, and hikes. They see these activities as a way to bring people together and fight for racial equity through wellness.

Ivy Coco Maurice, Etienne Maurice’s sister, is the third founding member and vice president of the group. She says all their activities are rooted in lessons they learned from their grandmother, like making every person you meet feel like family. Even the name WalkGood LA comes from the Jamaican euphemism they learned from her.

On a Sunday morning in early June, before yoga was set to begin on a grassy field, volunteer Lenny Gaiter checked participants in. Gaiter has been coming to these free classes since they started two years ago, when he learned that they were a response to violence against Black lives. “It's just a different way to respond, in a way that uplifts us, builds community, makes us stronger, [and] makes us feel better,” says Gaiter. 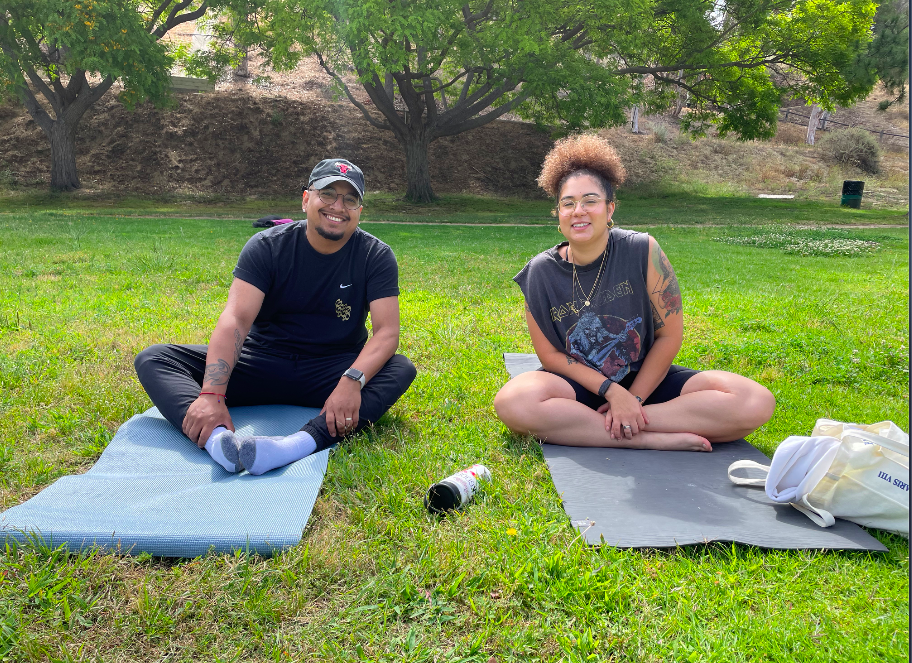 Married couple Joe and Christine Gomez came to a WalkGood LA yoga class together for the first time in June. Photo by Megan Jamerson/KCRW.

On a sunny strip of grass, Christine Gomez and her husband Joe were rolling out their yoga mats and settling in. Gomez brought her husband to introduce him to the practice of yoga. “I was like, ‘Come do yoga with Black people,’” says Gomez. “It's all people of color, and it's a really cool vibe.” After the class was over, Joe said he would like to make it a weekly couples outing, especially after noticing how the class made him feel “more open.”

That’s the simple feeling of relaxation that Etienne Maurice hopes participants attain and carry with them through their week. And they can get there, he says, by remembering to just breathe.

“I think yoga, it's like how I look at life,” says Maurice. “You're put in these really awkward, difficult positions. But the only thing you could really rely on is your breath, and the willingness to do the next pose, to do the next thing.”

In some ways, says Maurice, that’s how his family approached the community they’ve built. “When we were protesting we would say, ‘This is a movement, not a moment,’” says Maurice. “And we legit created a movement out of healing and community.”