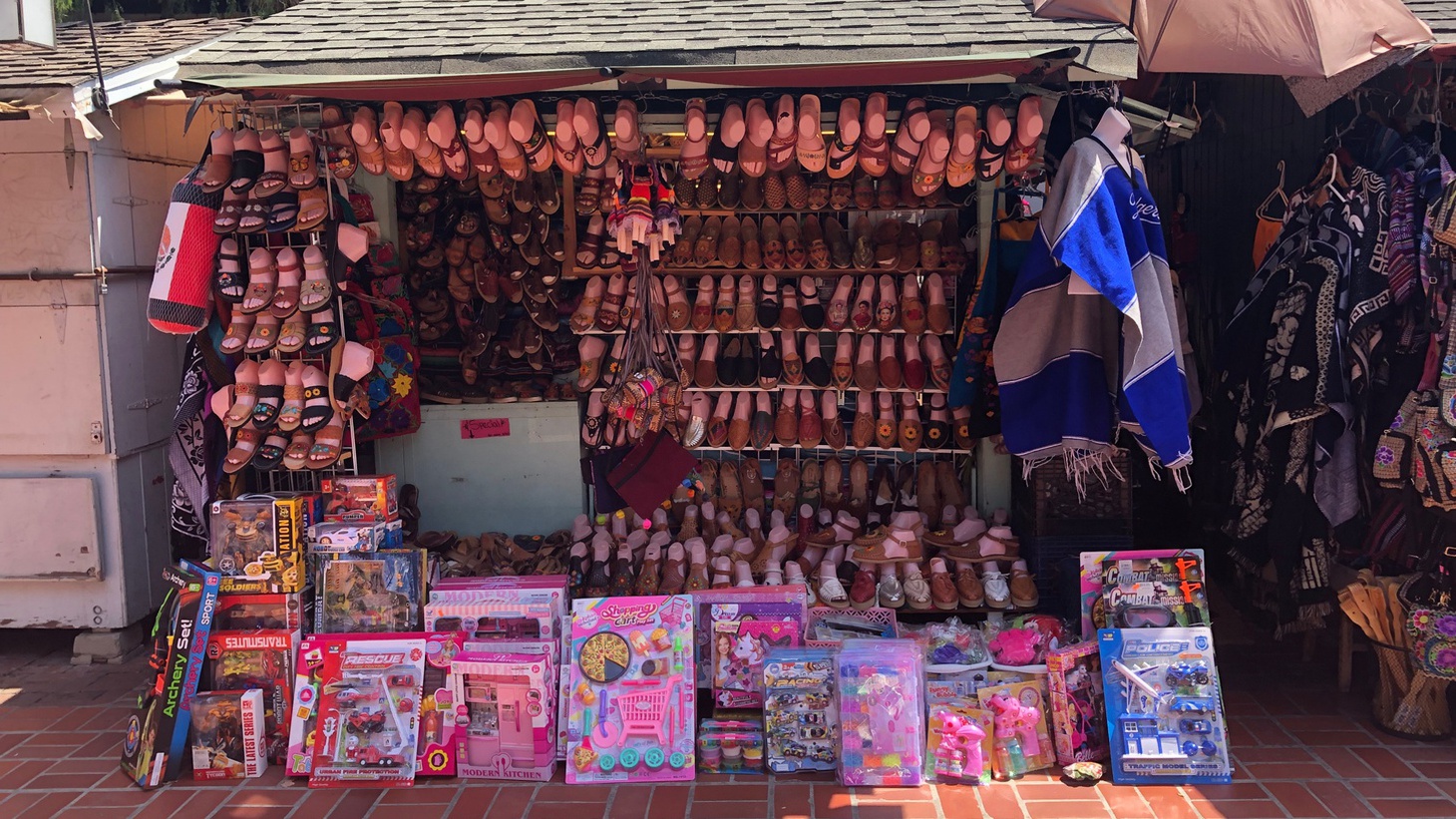 Business is slow at this Olvera Street puesto, which is selling huarches alongside cheap trinkets and toys. Another stall (left) has already closed for the day. “The crowds just aren’t coming back,” says Olvera Street merchant Valerie Hanley. Photo by Mike Schlitt.

Valerie Hanley owns a gift shop on Olvera Street that's been in her family for 57 years. Since COVID, Hanley says business is the worst she’s ever seen.

“We’re a tourist attraction. Right now, there is no tourism,” she says. “If we stay kind of where we are right now with the influx of people, I might make it through the end of the year. Maybe.”

Olvera Street – one of LA’s oldest streets – is a market, a commercial theme park, and a living museum — full of restaurants, shops, and stalls overflowing with candy, Mexican handicrafts, and cheap souvenirs. Most businesses, like Hanley’s gift shop, have been in the same family for generations.

As a historic site, the street itself is run by the city, so the buildings are here to stay. But the people in the buildings, running the shops and restaurants with their parents and grandparents sometimes? They might be on their way out.

Businesses on Olvera Street have struggled for years as the city has diversified and fewer people gravitate to a tourist’s version of Mexico. Then the pandemic brought merchants to their knees. “Most of us will eventually not be able to sustain ourselves,” Hanley says. “We’ll have to leave.” 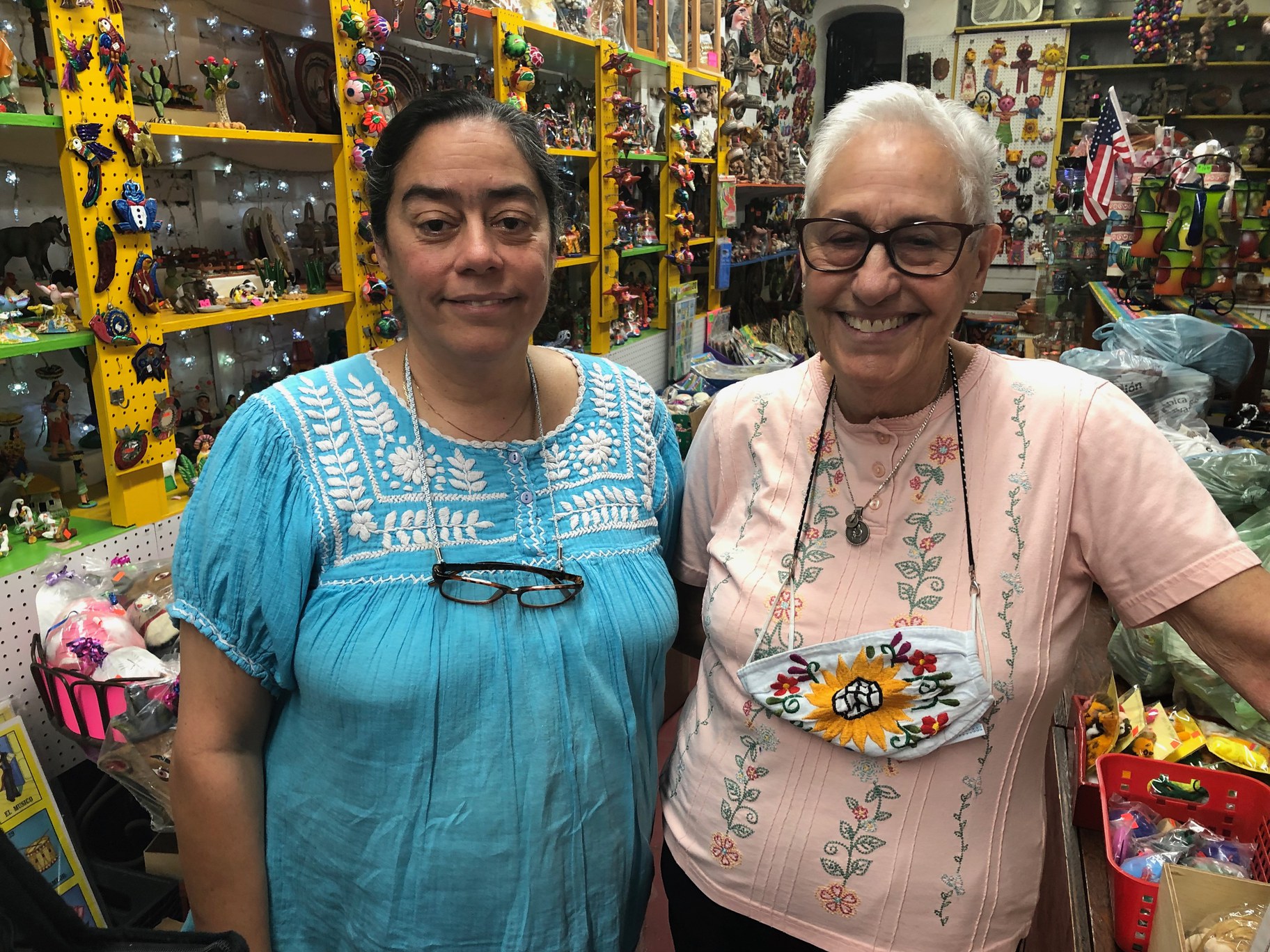 Valerie Hanley and her mother, Norma Garcia, are co-owners of Casa California, an Olvera Street souvenir shop. Hanley says, “It’s so slow right now, one day I sold $80. That doesn't even cut the light bill.” Photo by Mike Schlitt.

In March 2020, a citywide emergency order closed Olvera Street for four and a half months. At that time, Hanley says, “They were still charging the rent.” But by July 2020, the city agreed to waive all merchant rents for nine months — followed by a 60% rent reduction for another six months.

Now, since January, full rent on shop spaces is due, but not everyone has paid. LA City officials report that for most of the year, the city has collected just about half of the rent it’s due. Delinquent rents will be scheduled for collection once the city’s COVID emergency order is declared over. Those who don’t pay can be evicted.

Valerie Hanley says merchants are paying what they can. With business down  30-60%, she and others here are asking the city for more help. She believes the city wants the legacy businesses to go under. “Are you kidding me? The heart of LA? The city wants to develop this place, they’re trying to get money in their pocket,” she says.

“Merchants have to look at changing their business model,” Chavez says, “and change is the most difficult thing, as you know, for anybody.” 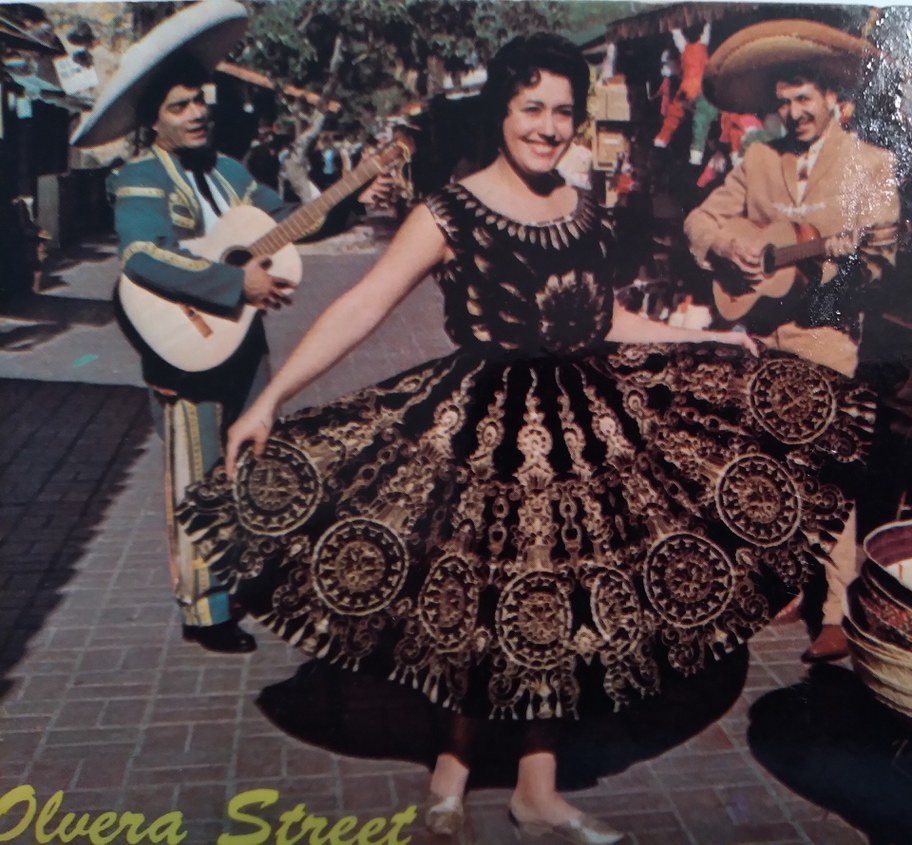 “Olvera Street helped poor Latino families survive, that’s what this place was born on,” explains Mike Mariscal, who owns a gift shop his great-grandfather opened in 1930. “Things haven’t changed much in 61 years.” 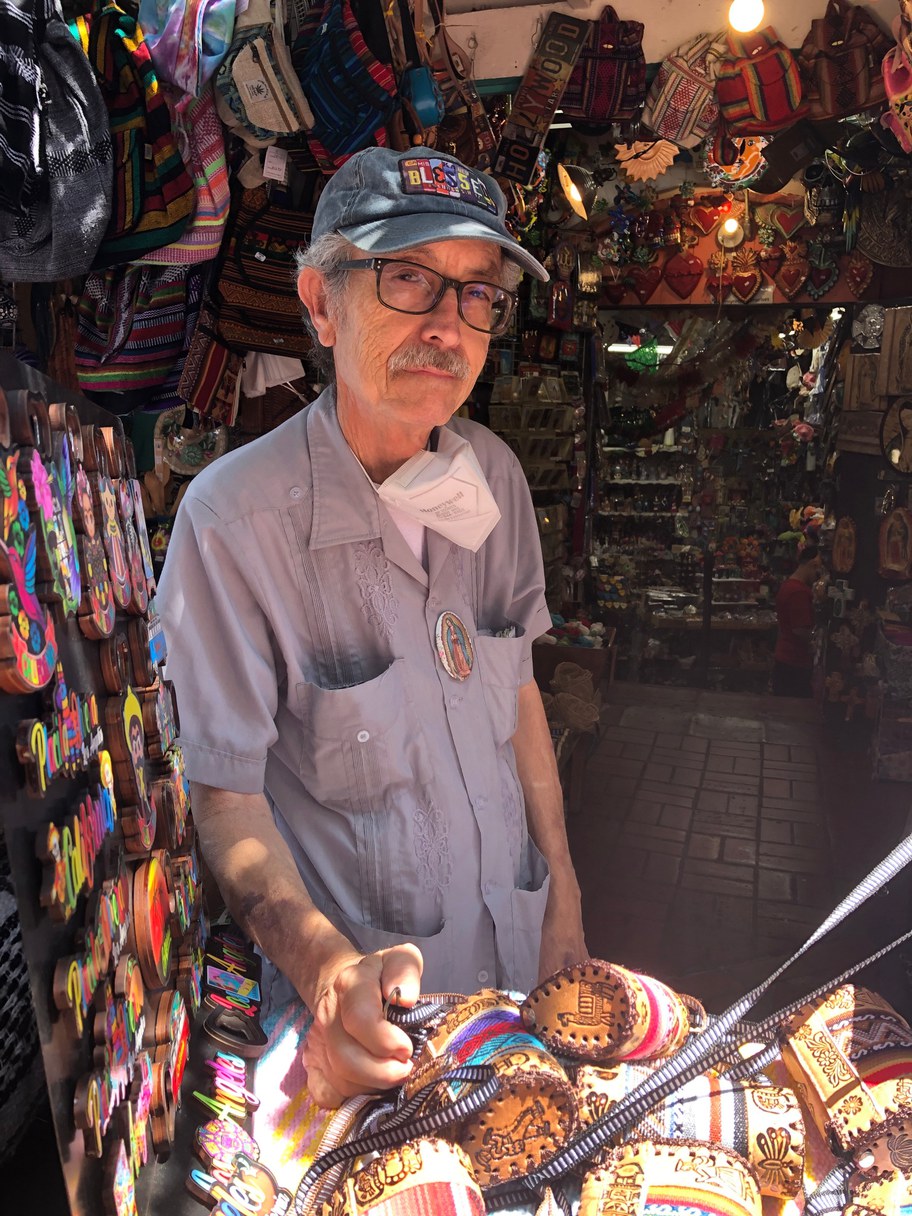 Mike Mariscal owns Myrosa Enterprises, the family gift shop he’s worked at for 61 years. “When I was 5 years old, I used to help put prices on things, and I’ve been here ever since.” Photo by Mike Schlitt.

Journalist Javier Cabral thinks that “same-ness” is a problem. “People take it for granted,” he tells KCRW.

Cabral is editor-in-chief of the local food, news and culture site, L.A. TACO. He’s a born and bred Angeleno — and a former Olvera Street employee.

“You have to realize that Olvera Street is a weird, mythical place in LA,” Cabral says. “Because it's kitschy, it's kind of Disneylandy, a little racist.” And then there are the taquitos.

“The crispy taquitos at Cielito Lindo are timeless,” Cabral insists, “and nostalgia is one hell of a drug. Olvera Street is definitely a place that survives off nostalgia.” 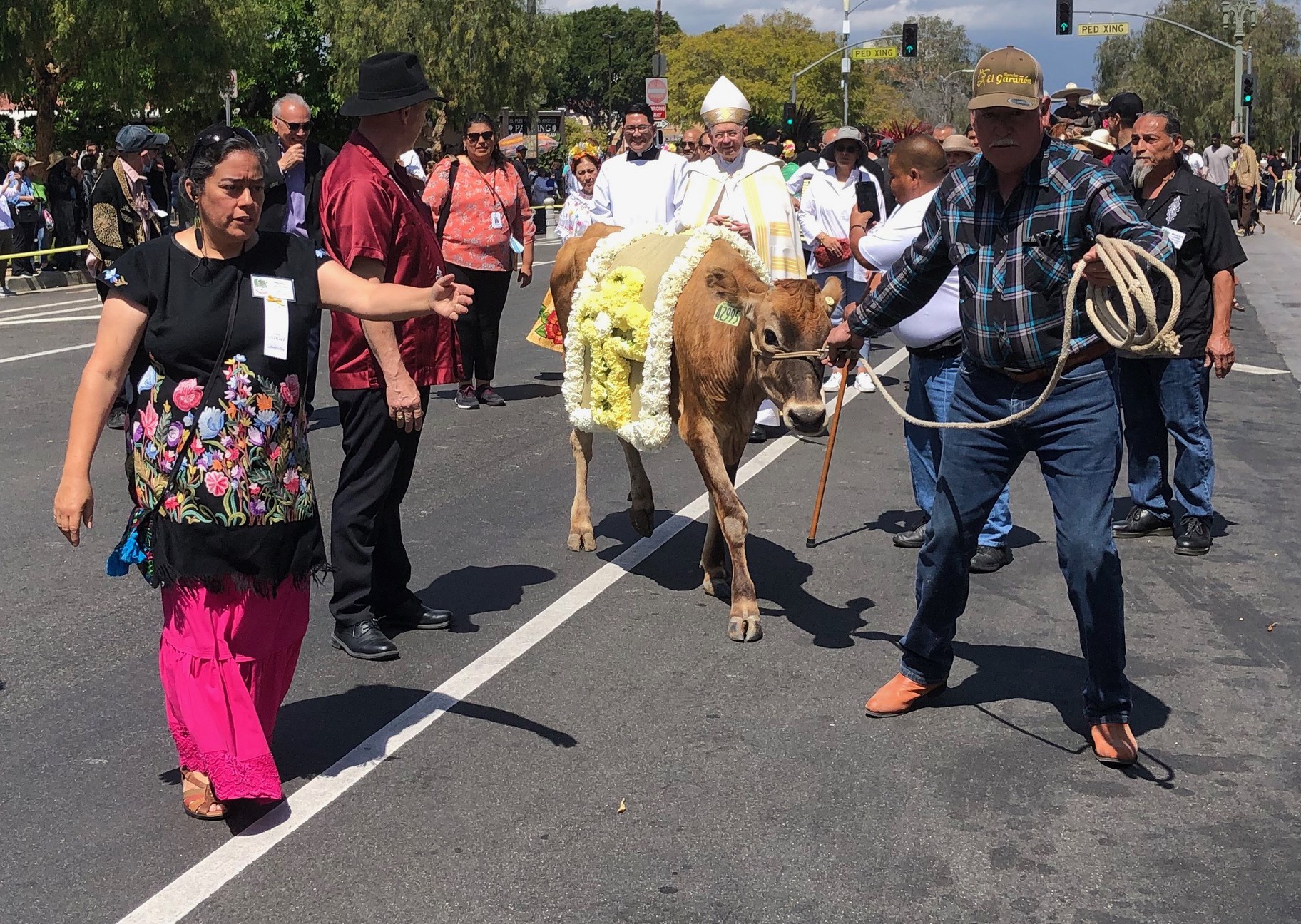 Valerie Hanley at this year’s Blessing of the Animals event, leads the“ceremonial cow” to the front of the stage. Hanley says, “At this event, the cow always leads the procession because, historically, the cow provided for the community by giving it milk, beef and hide leather.” At present-day events, the cow is usually pregnant. Photo by Mike Schlitt. 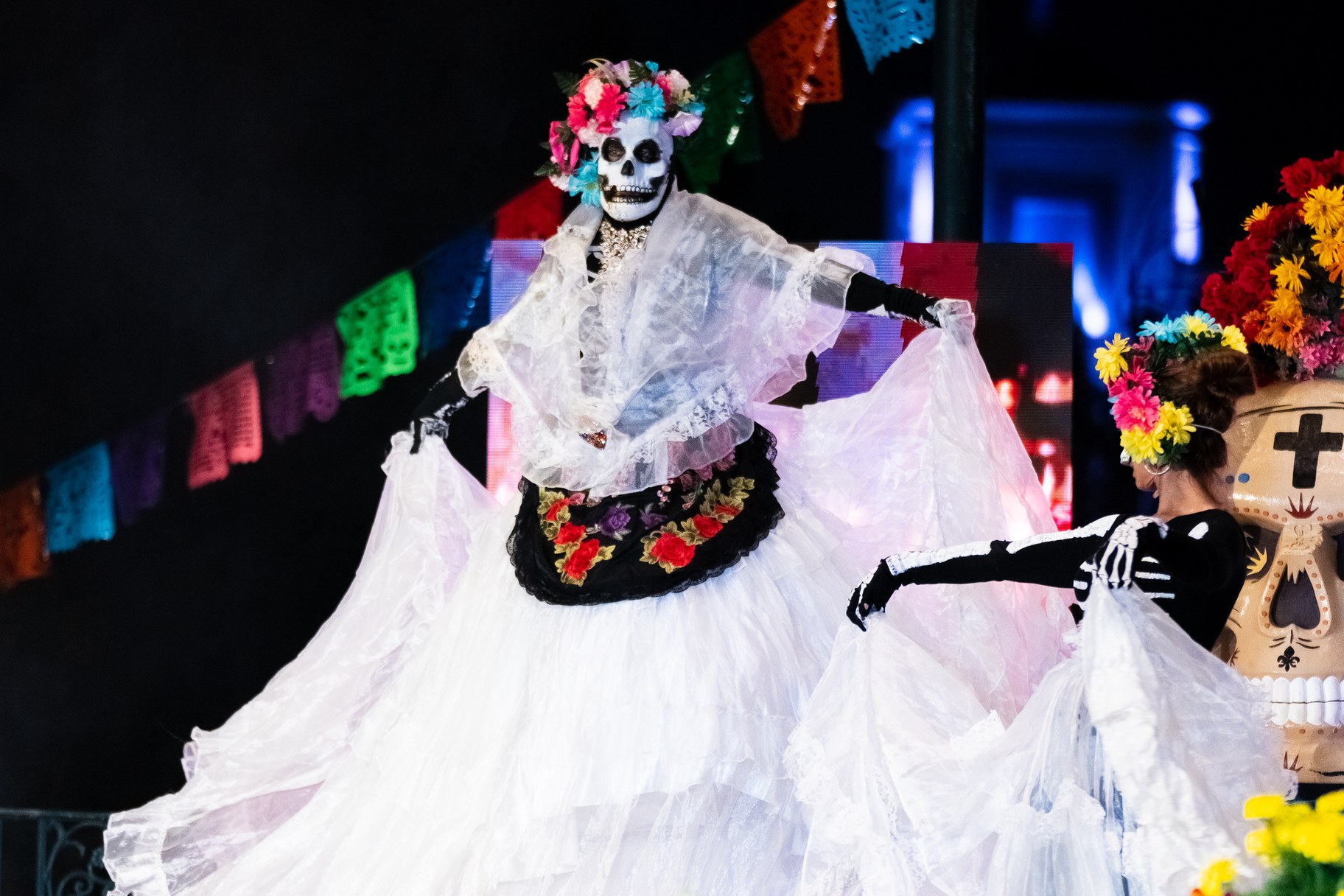 Teatro del Barrio performs Danza de la Muerte at Olvera Street’s 2020 Day of the Dead “virtual” celebration. The pandemic closed down live events on Olvera Street for all of 2020 and the most of 2021. Photo courtesy of Olvera Street Merchants’ Association Foundation.

Not anymore. In 2017, Disney released the cinematic juggernaut Coco, which grossed $800 million and turned Dia de los Muertos into a global big business.

“It’s a fine line between representation, appreciation, and appropriation,” explains Javier Cabral. “If you grew up Latino and you like horror like me, are you going to be grateful or are you going to be bitter?” This year, thousands of people will attend Day of the Dead events at Disneyland and Universal Studios. How does a street full of local mom-and-pop shops compete?

“I'm expecting the Disneyland guy in here any day,” Mike Mariscal says. “For the last 10 years, the main guy that does the exhibit for the Disneyland Day of the Dead, he comes in here and buys stuff from me.”

Greg Berber, who owns the popular Olvera Street restaurant La Luz Del Dia, is hoping he can innovate towards a better future. Berber wants to expand online sales of his most popular menu item — tamales. He got a $60,000 loan for marketing and equipment to make more tamales, store them longer and ship them anywhere.

Javier Cabral thinks merchants should appeal straight to the public for help. “If there's some kind of social movement to save the birthplace of LA, who wouldn’t want to support that?” he says. “Remember #SaveOlveraStreet!”

Whatever it takes to keep the doors open one more day.

This story is part of KCRW’s Born & Razed series that takes a deep dive into one local community, and part of Greater LA’s series on our city’s streets — how they got their names and what they say about past and present life here.