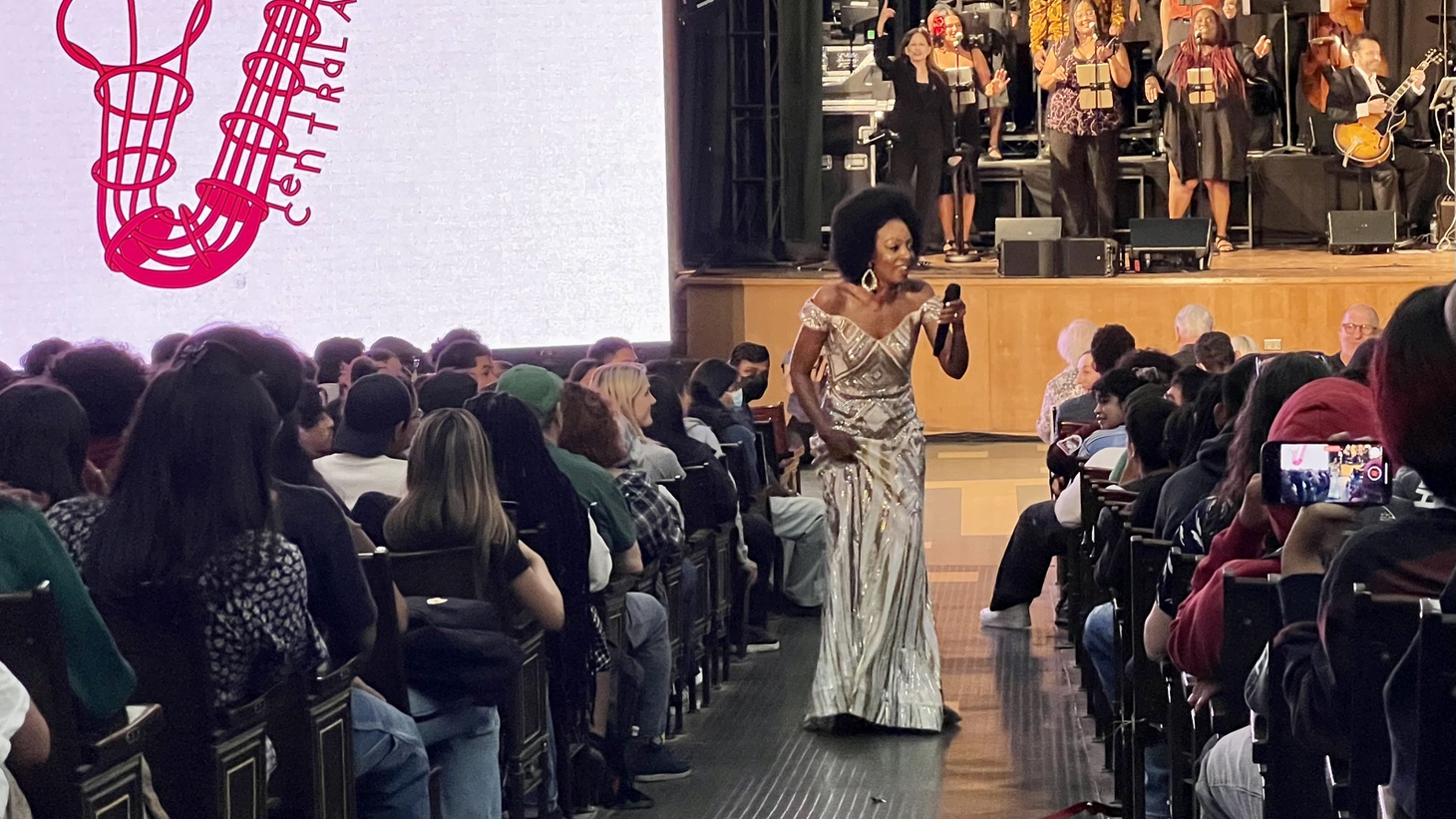 Singer Sy Smith sparkles in a floor length gown as she sings “They Can’t Take That Away from Me” by Ella Fitzgerald and Louis Armstrong. A mostly Latino audience of high school students, many witnessing their first live music concert, sits electrified. The show will last an hour and half– just long enough to fit into a class period at Thomas Jefferson High School.

Smith tells students it is humbling to perform at such an iconic place.

“One of you might be the next Etta James. Or the next Dexter Gordon,” Smith says. “That legacy is something they can’t take away from you.”

Performing arts organization MUSE/IQUE produced the show as an homage to the music history of South LA’s nearby Central Avenue, which hummed with jazz music in the early to mid 20th century.

This concert is part of a series in which the nonprofit travels around LA to teach forgotten history.

“Thomas Jefferson High School has some of the most incredible alums in the world. Alvin Ailey went here. Dexter Gordon went here,” says Brian Colburn, president of MUSE/IQUE. “We want people to remember and celebrate that.”

Singer LaVance Colley was astounded at how the teens reacted to the show.

“This generation, now they want to see Justin Bieber, which is fine,” he says. “I like Justin Bieber, too. I like Beyonce. I like all of them, but when you take it back to the old school, sometimes it doesn't necessarily interest the newer generation. But this place, this high school, these students, they were completely into it. I feel like I touched a few souls tonight and that's all worth it.”

Marlene Cardenas, Jefferson High School senior, says a lot of the students didn’t have clear expectations from the performance. Some of them walked into the auditorium without knowing it was a jazz concert until musicians started playing instruments.

By the end, every person in the audience either learned a new song or something about the history of Jefferson High School.

“It makes me feel good about coming here. Knowing people, they had a good experience here. And from here, they went on to a great track and a path and they got into big things,” Cardenas explains.

MUSE/IQUE moves on to the next performance in their “L.A. Composed” series on Oct. 6, which highlights the history of Grand Avenue.