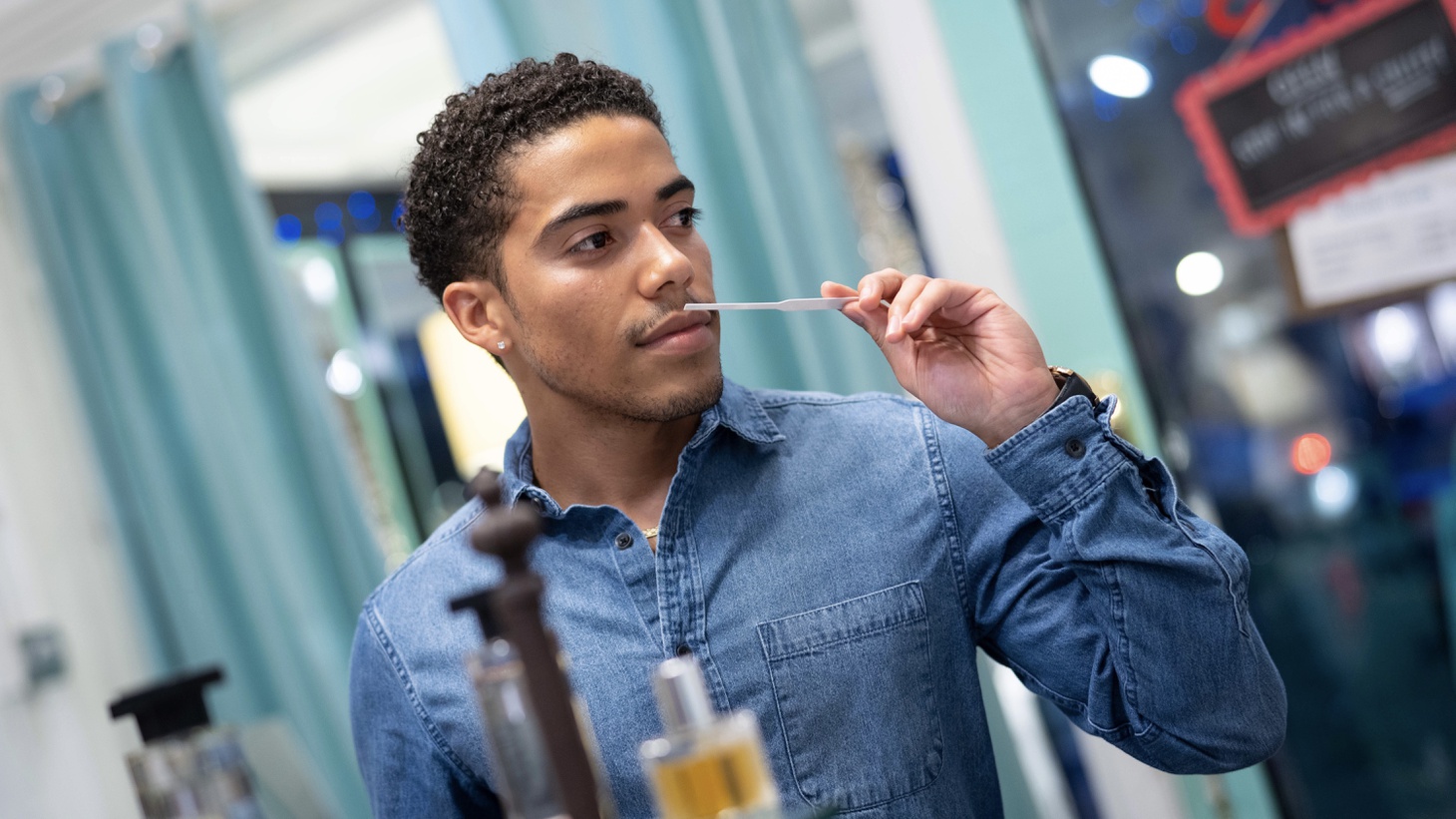 Perfume maker Matthew Sanchez of Moreno Valley was a finalist in the LA-based Art and Olfaction Awards. The independent perfume industry has a growing hub here. Photo courtesy of Matthew Sanchez.

About five years ago, Matthew Sanchez sat in a dentist’s office waiting room in Virginia. He was mindlessly flipping through a GQ magazine, when an article about the people who made famous perfumes caught his eye. He had two thoughts at once: This is the creative outlet I’ve been looking for, and none of these people look like me.

Most of the perfumers were men, and all of them were white Europeans. Sanchez thought to himself, “Is fragrance one of those industries that desperately needs some disruption, some diversity, some youth?” And then he made a decision: “I’m crafty. I'm scrappy and resourceful. I wonder if I can do this? And if I could do it, then I can be a part of the solution.”

Since that unlikely lightbulb moment at the dentist’s office, and a move back to California, Sanchez has become part of a new generation of local independent perfumers who are getting international attention while pushing the industry to become more accessible, more artistic, and more diverse. While the commercial perfume industry continues to be dominated by big European fragrance names like Dior and Chanel, the independent scene is growing fast — especially in Los Angeles, which is now considered a hub.

“In the huge landscape of America, you are definitely seeing a renaissance of perfumery centering here in LA,” says Sanchez. 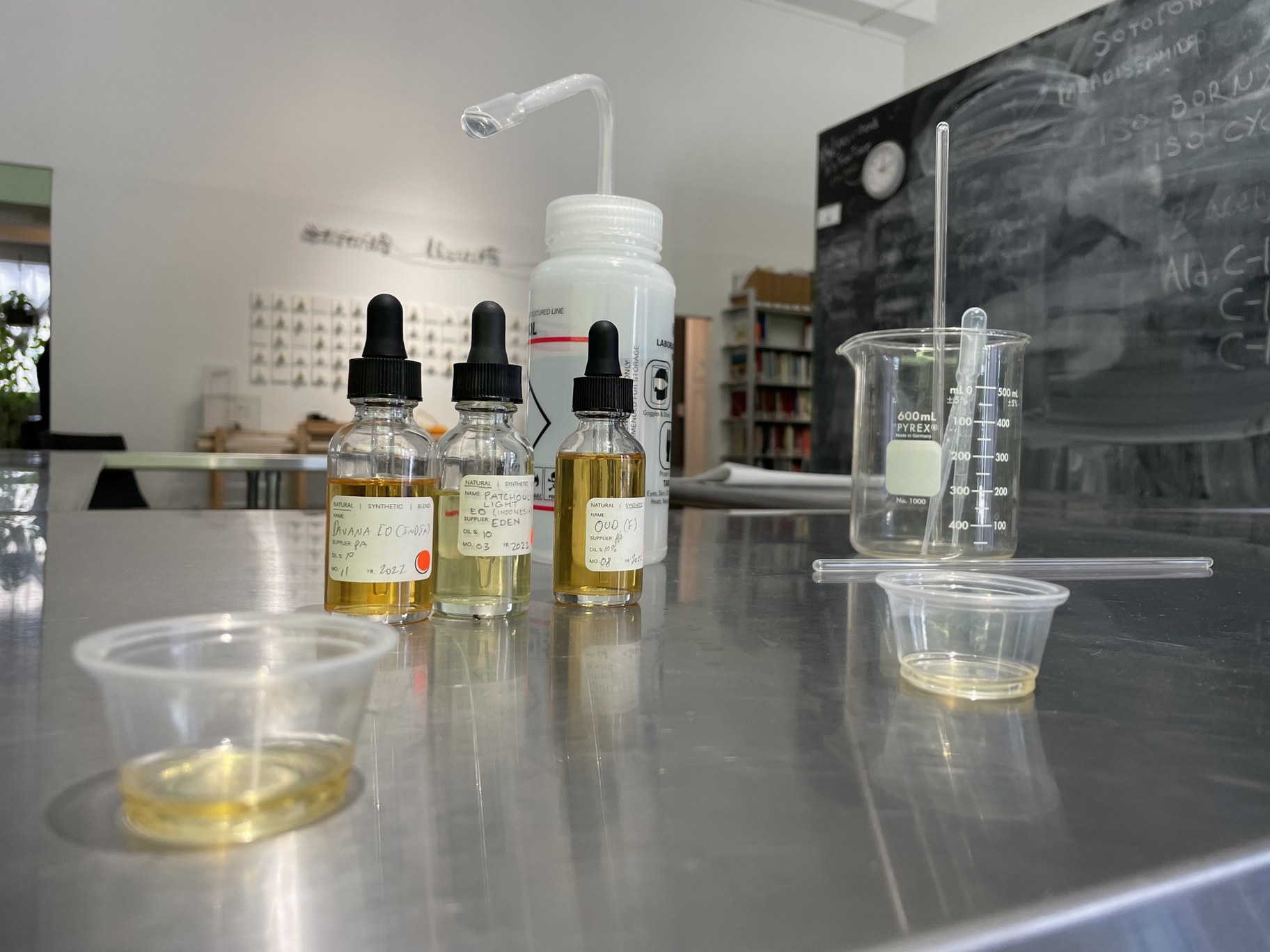 These materials and tools are used by students at the Institute for Art and Olfaction to blend liquid scents into perfume. Photo by Megan Jamerson/KCRW.

By day, Sanchez crunches numbers as a banking analyst at Capital One. By night, he studies the olfactory arts and develops new perfumes.

His first signature scent, Celedawn, combines notes of orange, cedar, and horchata — in a nod to his Mexican and Ghanaian heritage and his upbringing in the Inland Empire. The fragrance was a finalist in the 2022 Art and Olfaction Awards, something like the indie film world’s Independent Spirit Awards, but for perfume. It was Sanchez’s first entry into the contest.

“That is no joke, I mean it's hugely competitive,” says Saskia Wilson-Brown, an independent perfumer who started the awards 10 years ago in LA. Each year a panel of industry experts blind-judge the fragrances. “We have stuff being sent in from all over the world.”

In addition to the awards, Wilson-Brown also opened The Institute for Art and Olfaction in Chinatown in 2012. It’s like an art studio, but instead of learning painting or music, students learn to mix fragrances. Wilson-Brown describes the community there as “punk rock perfumers” because of the non-commercial ethos they practice. “It can get a little bit wilder. There's a little bit more sort of freedom, I think, because you're not really beholden to mass market appeal.” 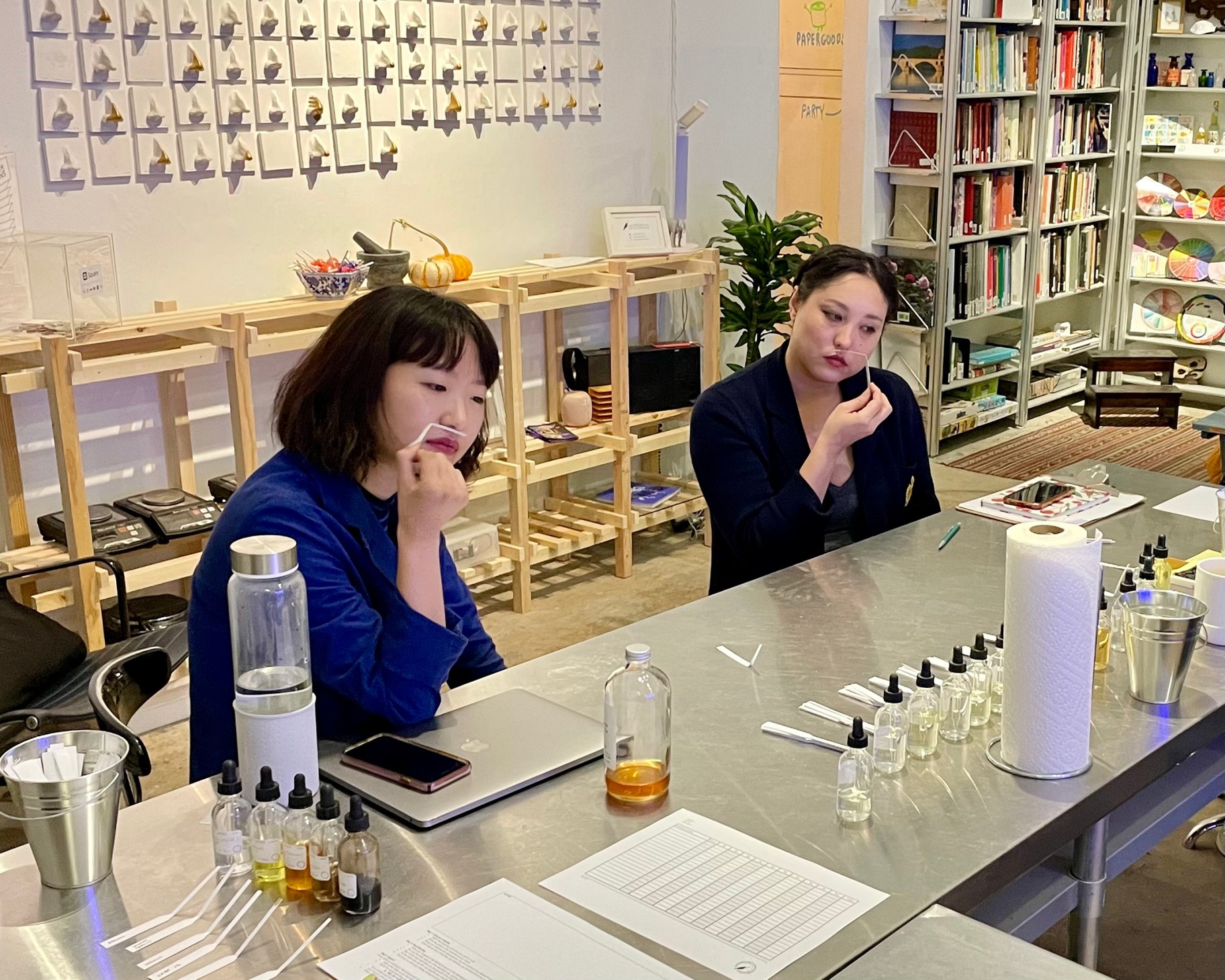 Julianne Lee (left) and Minetta Rogers (right) smell a fragrance during an introductory perfume class they teach at the Institute for Art and Olfaction in Chinatown. Photo by Megan Jamerson/KCRW.

While the only place to formally study the art of perfume is at elite academies in the south of France, the Institute for Art and Olfaction offers affordable weekly introductory classes. First-time students pay $50 and returners pay $15 for a two-hour class, where they learn to detect the nuances of different scents, and how to mix them to make perfume.

On a recent Wednesday evening, the class was sold out. Ten students of different ages and ethnic backgrounds sat around tables facing each other. They started the session with a smelling exercise, working through 12 different liquids with the aromas of tangerine, leather, and civet — think cat pee. Then they got to choose five to blend and make their own perfume.

Julianne Lee was one of the instructors that night, and she has been involved with the institute since 2014 when she first arrived here to take a class on a date. She found herself surrounded by fellow scent-obsessives. “Fragrance is obviously romantic. It's about beauty,” says Lee. “But it's also very nerdy. It's extremely nerdy.”

Lee dove into the artform at the institute while still working her day job in art, and says she fell in love with learning about the molecules that cause things to smell a certain way. She was so fascinated that she once tested out an 18th-century process to create essential oils from plants called enfleurage.

“I remember putting a call out on my Instagram, like, ‘Who knows where the jasmine bushes are? I'm running out,’’' she recalls. “I was like a bandit going around to people's yards here in LA, and harvesting all of the jasmine that I could bring home.” So far so good — but Lee had to cut her losses after piles of the pollinated flowers gave her an allergy attack.

Lee eventually decided to go to perfume school in France, but her elite education convinced her that anyone can learn the art of perfume.

“I thought there might be a secret key to help me be a perfumer — the perfumer of my dreams,” says Lee. “But it was really interesting to go there and find that there was no key.”

In order to master this art form, Lee says, it just takes hard work. “It is just about the amount of time and dedication that you spend on the craft.”

Lindsey Horvath is the youngest woman ever elected to LA County’s Board of Supervisors, replacing Sheila Kuehl. She’ll be the only renter and millennial among her colleagues...

Two art shows in LA might look like your kitchen after Thanksgiving. One features decaying ceramic fruits and vegetables, the other has topsy-turvy flower arrangements.