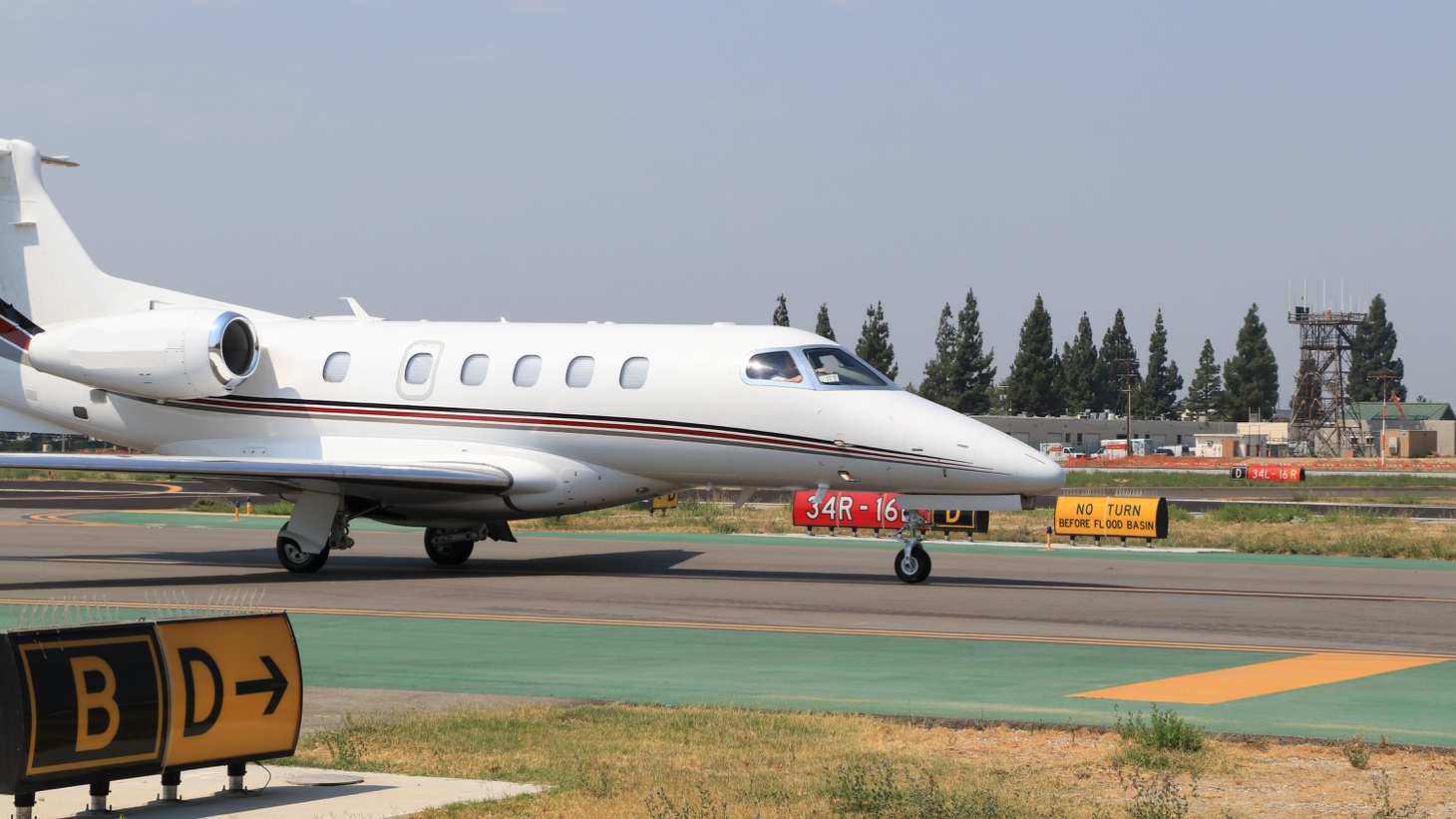 Standing outside waiting to pick up her daughter from school, Suzanne Gutierrez-Hedges started counting the deafening private jets flying overhead.

In nine minutes, she got to four.

Her daughter’s teacher told her every time a plane passes, the teacher stops the lesson to wait for it to leave because it’s too loud to speak to students.

The school is beneath the flight path from Van Nuys Airport, one of the busiest general aviation airports in the country. General aviation means it doesn’t have scheduled flights like LAX, so jets can come and go any time, day or night. And since the pandemic, it’s gotten busier as more wealthy people pay to avoid the close quarters of commercial air travel.

But those extra fumes are descending upon the people who live nearby.

“Just this morning, as we're walking outside to take my kids to school and getting in the car, I was like, ‘Cover your nose! Run to the car! Get in the car! Shut the door!’ I couldn't breathe because of the jet fumes,” says Guitierrez-Hedges.

The flight-tracking website FlightAware estimates private flights have gone up 15% since 2019, Reuters reported this year. On top of the rise in demand, Santa Monica Airport shortened its runway five years ago. Now it’s too short for most jet traffic, and many of those planes relocated to Van Nuys. Air traffic has increased every year but once since then.

Private jet travel may be convenient and glamorous, but it is also one of the most carbon-intensive things a person can do. A private jet spews roughly two metric tons of carbon every hour, according to a study by Transport & Environment, a European nonprofit advocating for zero-emission mobility. That means a four-hour flight emits as much carbon as the average person emits in a year.

And since chartering a small private plane from Van Nuys to Las Vegas rarely costs less than $5,000, it’s not surprising that a study released two years ago found half of all aviation emissions are caused by the wealthiest 1% of people.

That means there’s a wide wealth gap between the people flying over Van Nuys and the people living there. Van Nuys residents are mostly renters, mostly Latino, and mostly young. The jet fumes fall on households typically bringing in less than $60,000 per year – roughly the cost of a roundtrip private flight to New York.

“You have the 1% using this airport in a working class neighborhood, disproportionately affecting the environment right now in this neighborhood, in addition to increasing the impact on the climate,” says CSU-Northridge Sociology Professor Karen Morgaine. Morgaine recently took part in a protest where she and three others chained themselves to a model of a plane flying over an oil derrick to block a driveway into the airport. 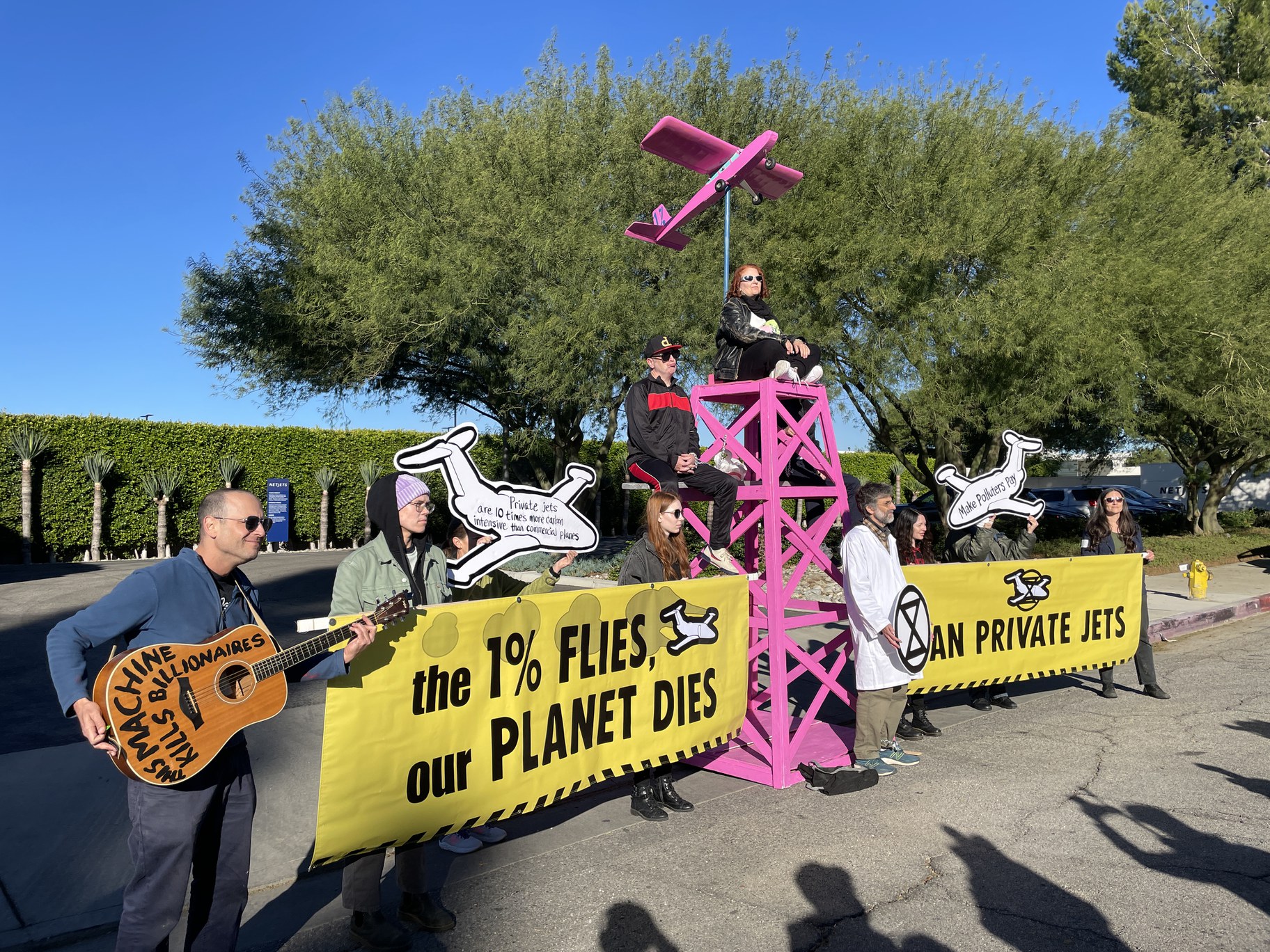 a
Karen Morgaine (atop the structure) and several others risk arrest to protest the climate impact of private jet travel. Photo by Caleigh Wells.

The jet pollution is especially noticeable for people living in “the pocket,” a cluster of homes wedged between the airport and Bull Creek. Some of the homes are a literal stone’s throw away from the airport hangers. One of them is owned by Sue Steinberg.

“The last couple years, it's been horrendous,” she says.

She can see a layer of black soot in her front yard. She keeps a cup of hot tea close by, and as she talks her voice cracks. She says it never used to do that, and whenever she leaves town, it stops. “I wake up every morning with a headache and a sore throat. That's just par for the course now, which is something you really don't want to get used to.”

As long as there’s a market for private jet travel, it’s tough to disrupt that status quo. Los Angeles World Airports (LAWA) manages the airport, and a lot of those decisions are out of their hands.

“We can't regulate the number of flights coming into Van Nuys,” explains Samantha Bricker, chief sustainability and revenue management officer at LAWA. “We can't institute a cap. We can't institute a curfew. We can't tell planes they can't land there. We have no ability to regulate flights. We have no ability to close down the airport at a certain hour. Those are just things that are not allowed under FAA regulations.”

It’s an investment into an airport that LAWA says supports 10,000 jobs and generating nearly $3 billion every year.

To curb pollution and noise, the airport is offering cleaner fuel, and requesting that planes not fly at night, known as their “Quieter Nights Program.” But using that fuel and adhering to the program is only voluntary.

The FAA said in a statement that they work with airports to address community concerns about noise and air quality. They also said LAWA hasn’t proposed any limits to aircraft operations in Van Nuys, but that they’d review them if they did.

It’s difficult to know just how toxic the air pollution is near the airport. Bricker says the latest local study on Van Nuys airport’s pollution was conducted 17 years ago and published in 2010, and there’s no plan to do another one.

“Most of the pollution was coming from roadway vehicle emissions as the highest source of pollution, and it was not the aircraft,” she says. “And so there has not been a need for a new study, because the feeling was the findings for that study are still relevant.”

The EPA did study the toxic lead levels at airports nationwide five years ago. Van Nuys was the seventh worst airport in the country, with more than twice as many people living nearby as any of the other most polluted airports.

And that was before Santa Monica closed their airport to most jets, and the private jet industry experienced its pandemic-era boom.

As for the state’s power to intervene – even though California is known for its strict air quality rules, the state can’t regulate emissions from airplanes. It’s the national government that does that, and right now they don’t have emissions rules in effect.

In the meantime, LA city officials are taking notice. In November the Los Angeles City Council asked for an analysis to address the jump in private jet traffic in Van Nuys. Then in December, they voted to consider charging a greenhouse gas pollution fee on private jets. Now city officials and LAWA are tasked with reporting back on what creating that fee would look like.

P-22, the mountain lion who lived alone around Griffith Park, was euthanized over the weekend. As people are mourning, what will happen with his remains and legacy?

The U.S. economy shrank during the pandemic, but some industries thrived, including private air travel. Residents near Van Nuys Airport say it’s harming their health.