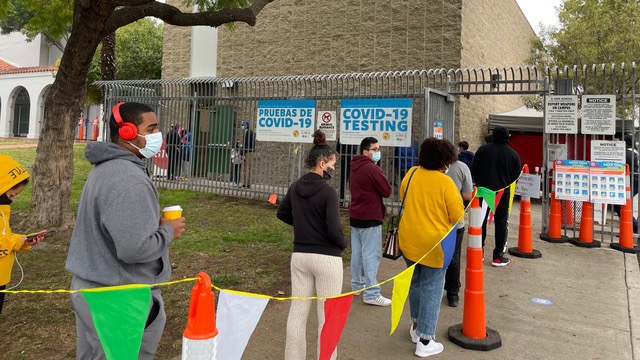 Students wait in line at a LAUSD COVID testing site run by LAUSD in Leimert Park. Photo by Caleigh Wells.

One in seven COVID tests for LAUSD students and staff came back positive for COVID-19 in the past week. It’s the highest positivity rate the school district has seen since the beginning of the pandemic. And kids are headed back to in-person school on Tuesday.

Large school systems in Detroit, Cleveland, Milwaukee, Chicago, Madison and Newark all delayed the start of their spring semester, or switched to online instruction because of the recent Omicron surge.

LAUSD isn’t one of them.

That has some teachers worried for their safety, and parents concerned that their kids will contract the virus when they go back to school.

“Feeling safe? I can’t be 100%, no,” says Tierra Smith, who brought her sixth grader Brandeis to Crenshaw High School on Friday to get tested. “It’s scary, but I mean he has to go to school. So I just pray about it and hope for the best.” 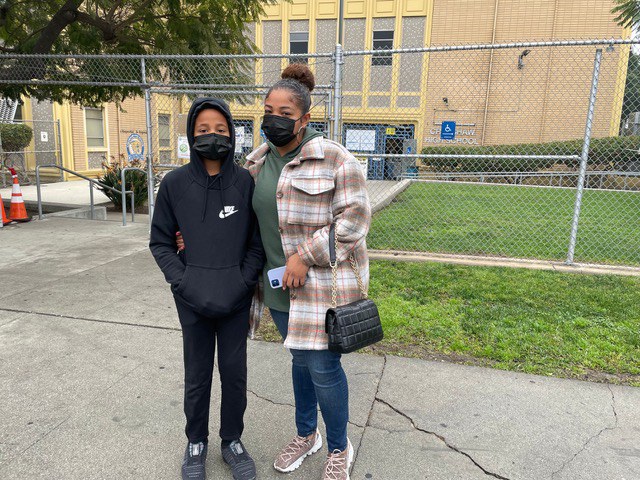 Brandeis Smith, 12, says he agrees with his mom, Tierra Smith, that COVID transmission risk at school is worse than it used to be. Photo by Caleigh Wells.

LAUSD has conducted weekly PCR testing for all of its students since the school year began, and in order to come back after the winter break, they are accepting PCR tests and rapid antigen tests. Students had to upload their test results by Sunday.

Parent Danielle Peters, who lives near the Fairfax neighborhood, is keeping her kids home for most of this week because she says it’s too easy for COVID cases to slip through the baseline tests undetected.

“I could conceivably have taken a test … gone to a wedding of 200 people where five of them have COVID, come back infected and still been okay for school because my test was negative,” she says. “That doesn't make sense to me.” 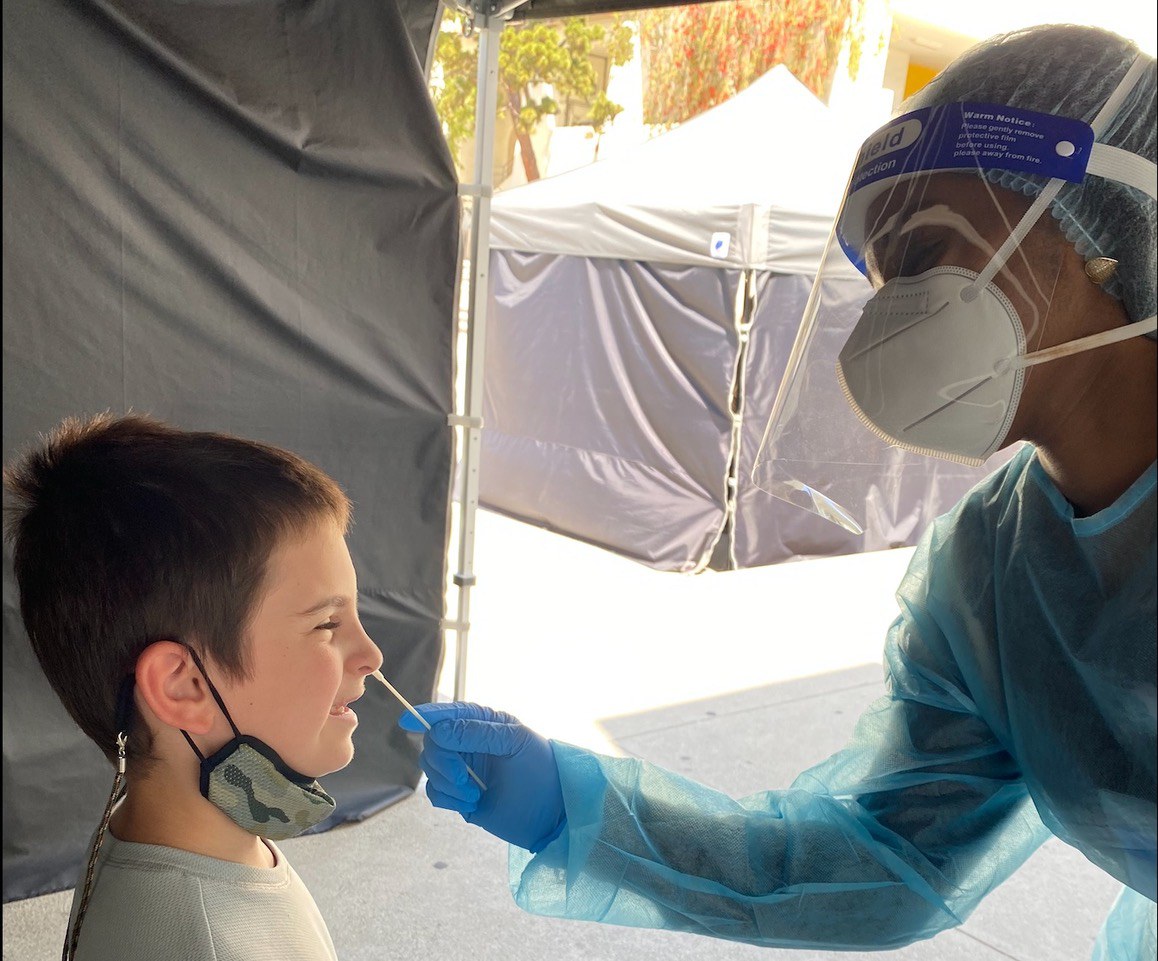 Her school conducts weekly testing on Wednesdays, and she is waiting to see whether the school identifies any more positive cases before sending her kids back to school.

“I have spent way too long being way too careful to blow it now on something not fun, like sending my kids to school. If I'm going to get this, I want to get it at Disneyland or on a plane when I'm trying my best to be careful, but at least I'm having fun,” she says.

LAUSD parent Antonieta Garcia says she would prefer for her daughter to learn remotely, but then she’d have to disenroll her from her school and enroll her in the virtual school LAUSD offers, called City of Angels, which is more disruption than she’s looking for. Instead she says, “I wish that they could have a little bit of remote learning until at least all the COVID kind of lowers down.”

Garcia lives in East LA and has a 2-year-old who was born premature and sometimes has difficulty breathing. She’s especially worried that her fifth grader could come home and infect her toddler.

“My worry is that … there could be more exposures in the school, and then we have to … take her to the hospital,” she says.

“I wouldn't cry if we found out that we were all going back online,” says Jeri Lynn Resnick Albala, who teaches preschoolers in West LA who aren’t old enough to get vaccinated. “I would be much happier and feel much better and sleep much better. And I have a mom who's older, and I just lost my dad six weeks ago. And now I'm very nervous about seeing her … But on the other hand, I understand for so many families, it would just be a hardship [to go back to remote learning].”

Albala says on top of her safety concerns, staffing shortages are making it difficult to take time off. When her dad died, she had to schedule her time off based on when her favorite substitute teacher was available. Now that she’s sick, if there’s no substitute teacher, then kids could get split up and mixed with other classes, which can increase transmission.

But short of canceling in-person instruction, she’s comforted by the stringent safety protocols on her campus, and surprisingly, she says her 4-year-olds are great about keeping their masks on all day.

Meanwhile, parents who are worried about their kids’ safety, like Peters, say they’re learning how to live with a more contagious variant that will inevitably pop up in the district.

“My kids being around other people, outside of our bubble, is more nerve-wracking than it used to be. But this is life,” she says. ”This is how things are going to be. And either we stop living, or we start crossing our fingers holding our breath and living this new life.”