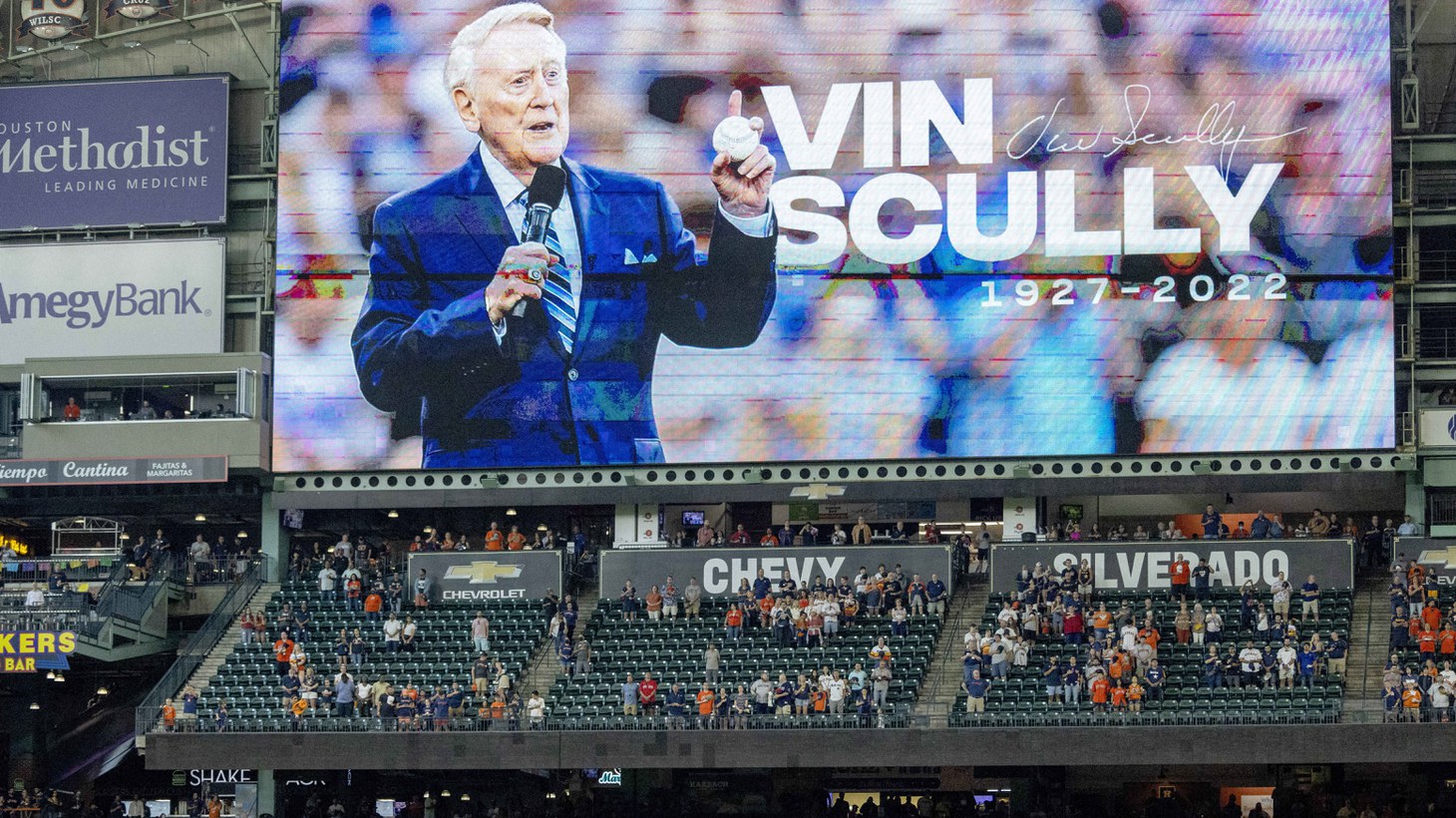 Players and fans stand for a moment of silence for the passing of Vin Scully before the Houston Astros play against the Boston Red Sox at Minute Maid Park, Houston, Texas, Aug. 3, 2022. Photo by Thomas Shea-USA TODAY Sports.

Angelenos are mourning the death of 94-year-old Vin Scully, the iconic broadcaster who called 67 seasons for the Dodgers. Tributes all over LA and the baseball community have been pouring in.

“Just the voice. It, to me, is family. It, to me, is a soundtrack of Southern California,” says Gustavo Arellano, longtime Dodgers fan and columnist for the LA Times.

Arellano explains he always listened to Scully on the radio, including when he traveled beyond LA to report in other areas like Santa Barbara.

Scully had the ability to form a connection with players, fans, and anyone who was listening.

“He was the one who's gonna connect Steve Garvey to Eric Karros to all the other first basemen and third basemen, and everyone that was going along. … Vinnie literally was a walking encyclopedia. And then on top of that, it's his delivery and his voice,” Arellano explains.

Steve Garvey, a former baseball player for the Dodgers, says he was a child when he first encountered the famous broadcaster in Florida. Twelve years later, he came across Scully again, when Garvey was three days into spring training in Dodgertown.

Garvey also remembers the way Scully’s voice echoed through the stadium when he predicted that Garvey would have a good career with the Dodgers, regardless of how he struggled in the beginning. Garvey credits Scully with saving him from the wrath of the fans.

“Through the years, he [Scully] captured not only Dodger baseball, but some very special moments in my career and ended it with the grace of being the greatest of all time,” Garvey explains.

He says that Scully let the moment speak for itself and didn’t talk over the crowd, allowing fans to absorb what was happening. He did this with Hank Aaron’s home run and Kirk Gibson. Garvey says that when Scully felt that the crowd processed the moment, he would then explain how the impossible had happened.

“Vin was a poet,” Garvey says. “And to truly be great at what you do in that business, sometimes it isn't the volume of the words, it's the ability to use a few words to actually capture the moment in a memory.”

LA is in mourning after iconic Dodgers broadcaster Vin Scully died Tuesday at age 94. He called Dodgers games for 67 seasons before retiring in 2016.

Mo Ostin died this week at age 95. He ran Warner Brothers Records from the 1960s to the 1990s, then helped create the record label arm of DreamWorks.