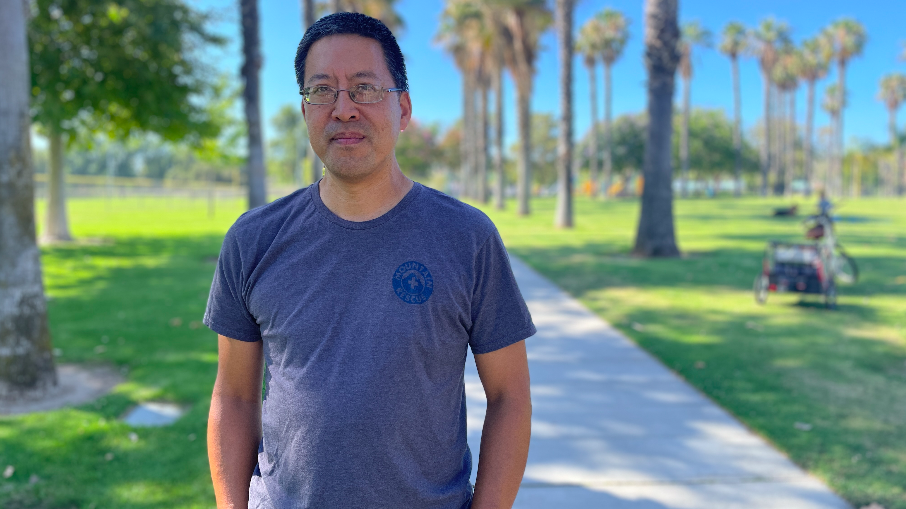 Ben Kuo has taken to social media to point out which homes might be failing to follow drought restrictions. Photo by Caleigh Wells.

Satellite imagery can show which households in Southern California are likely following watering rules during the drought — and which ones are failing to comply.

Data from the Sentinel-2 satellite isn’t coming from a local water agency, but from a hobbyist. Ben Kuo likes using high-tech tools to understand natural disasters.

“I don't think anyone's thought of using that same data for tracking water users,” he says. “[It] is amazing to me that from out in space, you can actually see what someone's doing in their backyard.”

The Cal State Channel Islands geographer and science teacher has become an important Twitter source for Southern Californian disaster information. But before that, he was just a dad, trying to satisfy his son’s curiosity.

“He was interested in listening to the firemen and police radio when he was in elementary school, of all things,” Kuo says of his son. After lots of noodling around with the scanner, “it became a lot more than a simple hobby for me.”

In 2017, when Hurricane Maria devastated Puerto Rico and wiped out the tiny island country of Dominica, Kuo says he used an amateur radio to pass messages between the residents there and the U.S. Embassy, which eventually sent helicopters to rescue U.S. citizens from the wreckage.

Kuo found another role for himself later that year when the Thomas Fire broke out much closer to his home in Thousand Oaks in Ventura County. It’s still one of the top 10 largest wildfires in state history. Kuo listened in on police and fire scanners, and put the information he gleaned onto Twitter, where journalists and locals affected by the fire eagerly consumed it.

Then last year, he found 15 minutes of fame through a Washington Post article about his assistance in the rescue of a missing hiker in the Angeles National Forest.

“Using satellite information,” he recalls, “I found the guy using only the photo of his feet.”

Kuo led sheriff’s deputies to the right area to search for him. The hiker was helicoptered out of the wilderness after 27 hours lost in the mountains.

Satellite data has also helped Kuo demonstrate something else he’s passionate about: that humans have changed their environment.

“A lot of the disasters that we see, and that I've been involved with helping out with, [include] wildfires [that] are driven by climate [change],” he says. “Hurricanes … flash flooding … they're all tied together.”

The natural disaster of 2022 is the state’s worsening drought. In June, after local water agencies told customers to cut back their water use, Kuo noticed something strange from a satellite he was monitoring.

“One of the things that you can look at is called ‘moisture index,’” he says. “And it happens that this satellite has enough [detail] that you can tell where things are dry or wet on a much higher resolution.”

The free, publicly available data allows users to zoom in to view a specific house and see how wet the yard is. A dry lawn might show up orange on the satellite data. A household that’s flouting drought restrictions with lots of damp grass will show up blue. 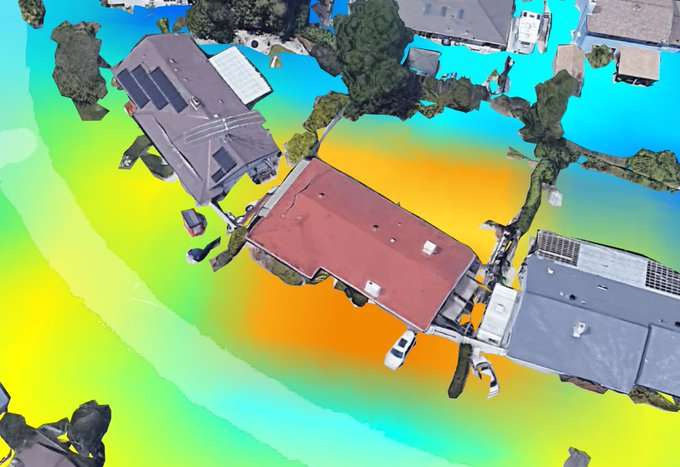 A household with dirt or fake lawn will appear orange or red on the satellite map. Photo courtesy of Ben Kuo.

Kuo says Camarillo is a great place to find people who are not following the drought rules, because their water use rules are some of the strictest in Southern California.

Residents are only allowed 15 minutes of outdoor watering once per week. Three violations can total $600 in fines. A fourth violation might mean the city turns your water pressure way down. 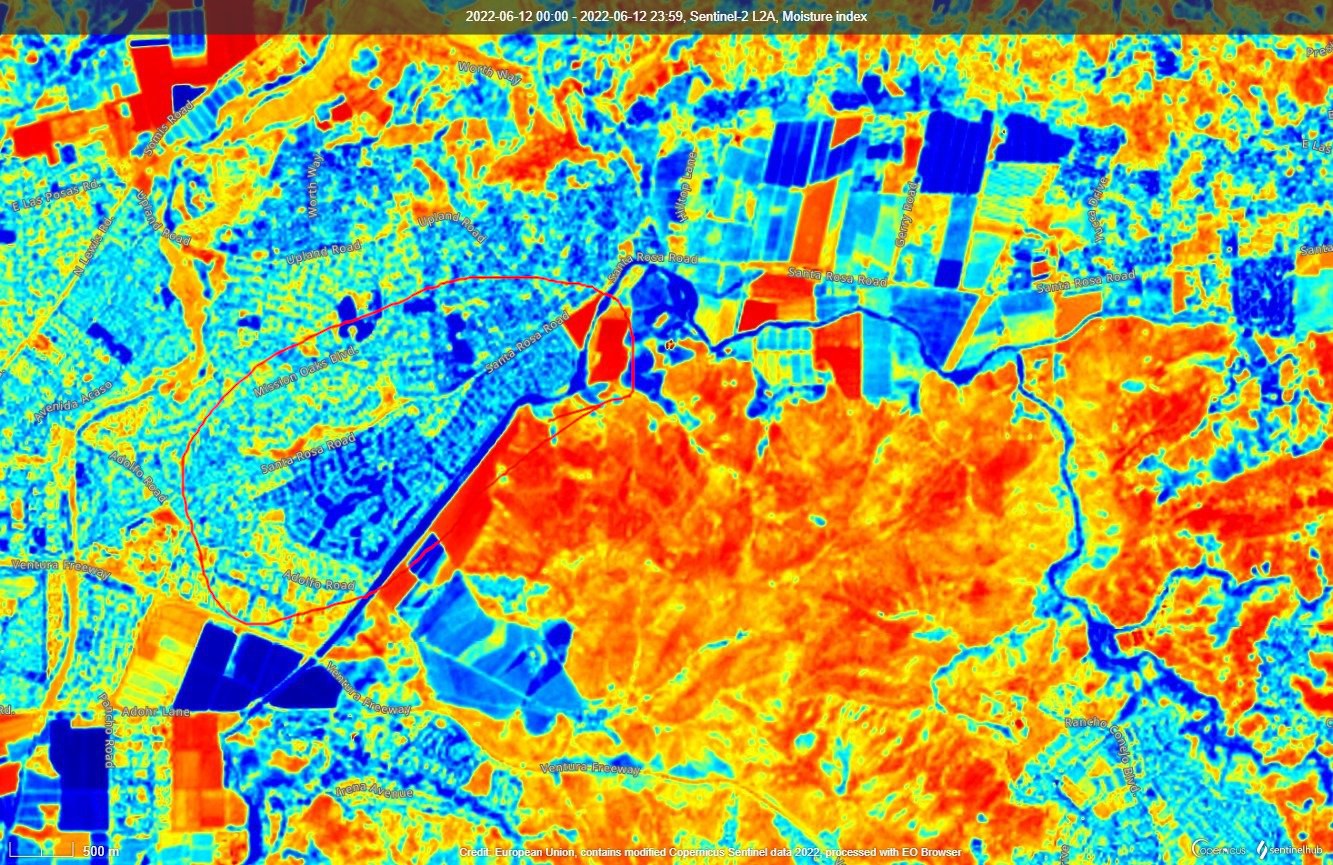 Leisure Village, a 55-years-and-up community in Camarillo (circled), siphons off recycled water from a nearby treatment plant, which isn’t restricted by drought rules. It appears bluer on the moisture map. Photo courtesy of Ben Kuo.

“We do have a water patrol that actually goes out during the day and the evenings at this point and monitors the residents’ usage,” says Deborah Gallegos with the city of Camarillo.

Walking around a regional park in Camarillo, Kuo observes the dead brown grass that blankets Southern California’s hills in the summer. “If you're out in the hills here just hiking around, you just realize when things get dry here, how dry it is. And I don't think when you're inside your house with air conditioning on you realize how bad the drought is,” he says. 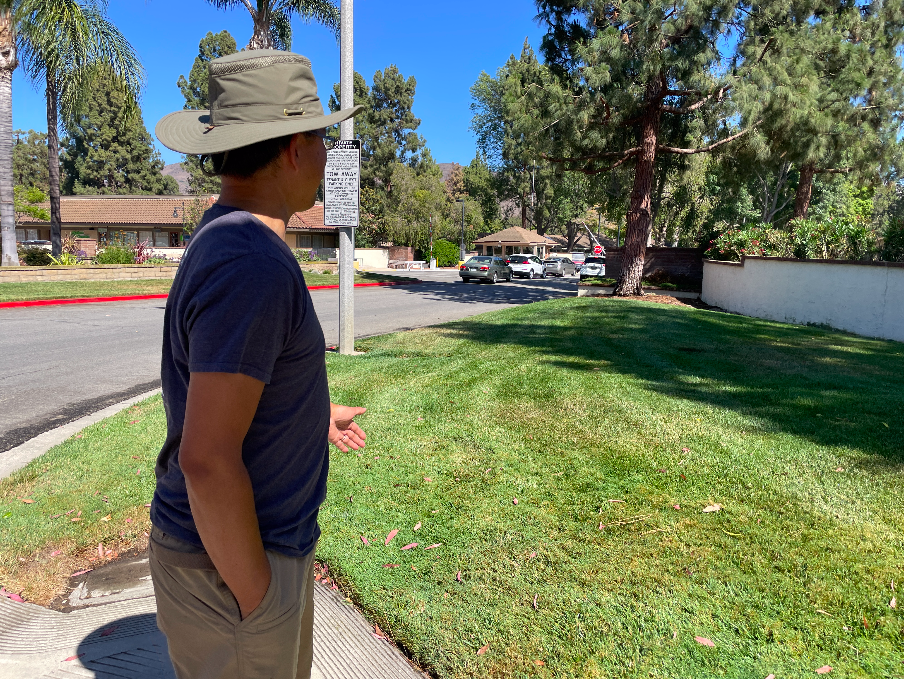 On his social media, he jokes about how his posts shaming some of the water-hogging households might not be all that popular with the water hogs. But when it comes to policing water use, he says desperate times call for desperate measures.

“If you recall, last year, Governor Newsom said, ‘Oh, everyone conserve,’ and everyone just kept on using water. Voluntary restrictions are not that effective,” he says. “We're in a climate emergency right now. And we're running out of water in Southern California. What do you do?”

The language of the Serrano tribe native to the San Bernardino Mountains almost went extinct. Now historians and a new generation of Indigenous Californians are working to...

Birds are dying by flying into buildings. Can architects solve the problem?

Hundreds of millions of birds die annually from colliding with buildings. In LA, some animal advocates want to see architectural designs that are safer for avian inhabitants.