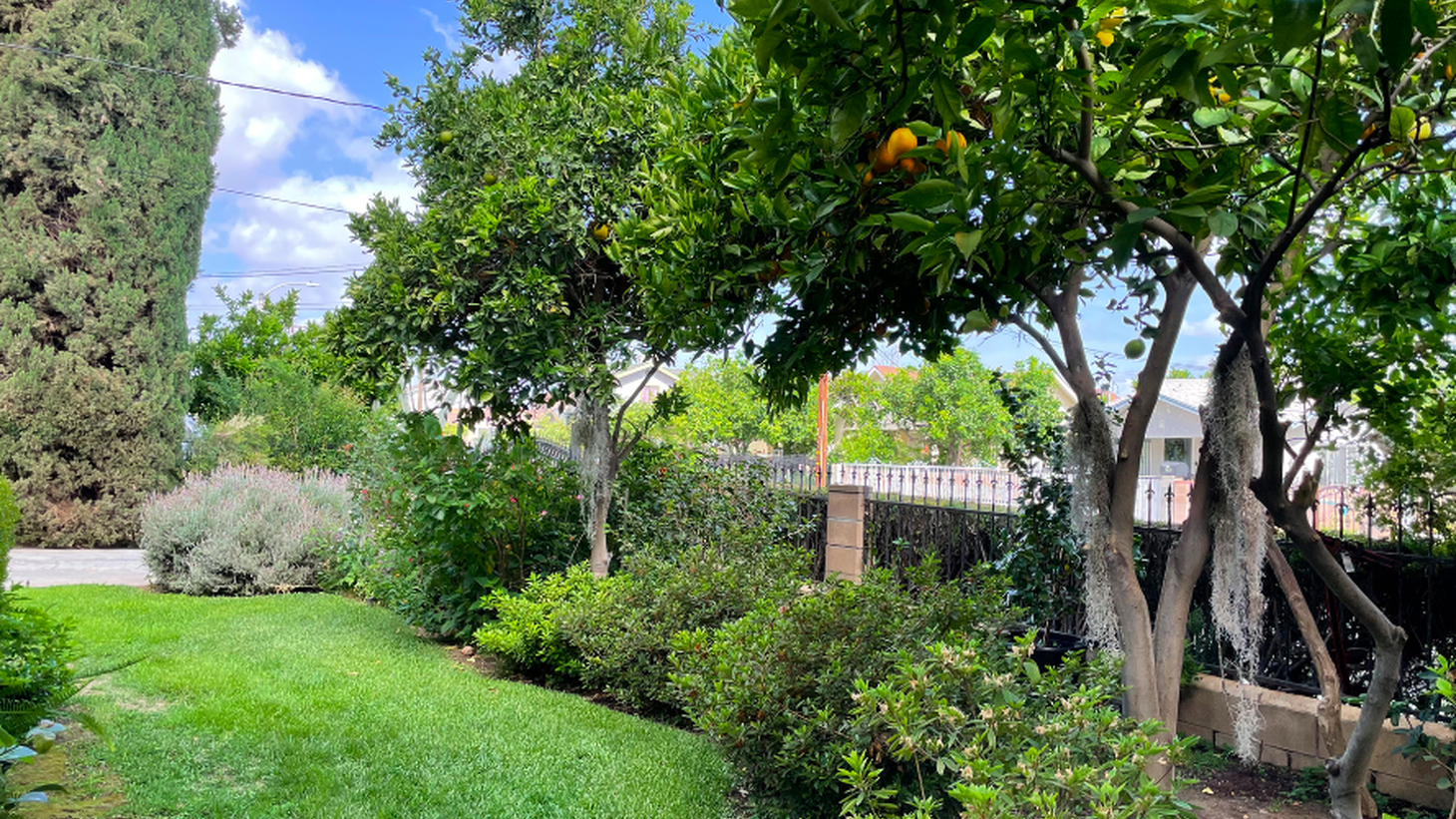 The thirsty plants in this Rosemead garden may not all survive the drought-related water restrictions starting next month. Photo by Caleigh Wells.

Starting June 1, 6 million Southern Californians will face new water restrictions that limit most of them to watering their landscapes twice or just once per week.

For now, only water districts that pull significantly from the State Water Project face the restrictions, which includes large swaths of the City of Los Angeles, Ventura County, the Inland Empire and other communities. LADWP announced this week that people living at odd-numbered street addresses can wash their cars and water their lawns on Mondays and Fridays. It’s Thursdays and Sundays for even-numbered residents. Other communities could be next, and the belt-tightening may get worse before the next rainy season.

How are garden enthusiasts preparing? Here’s a tale of two yards. 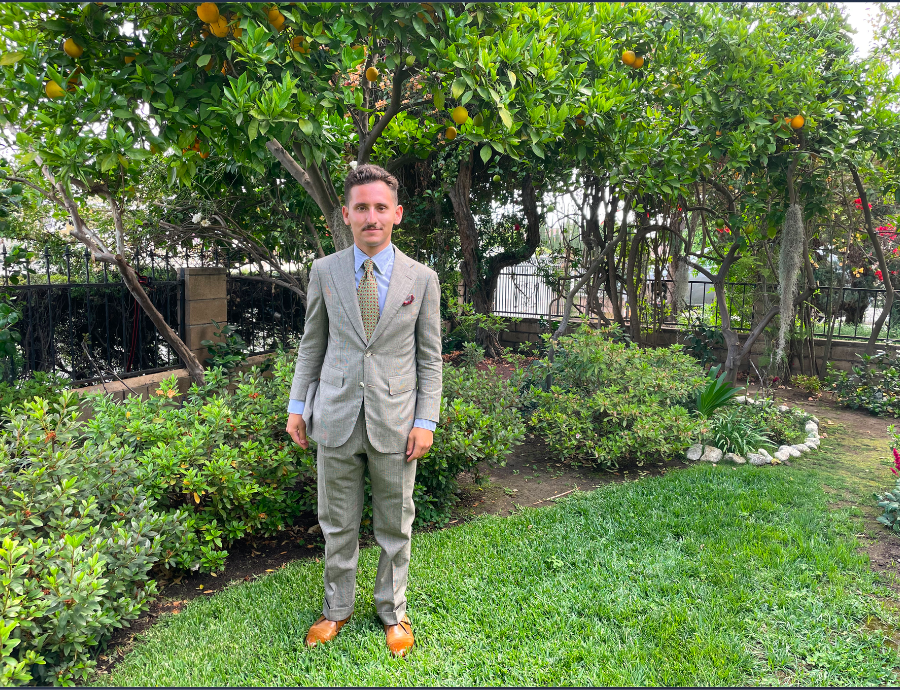 Michael Ossen prefers water-demanding plants that grow in the southeastern U.S. for his Rosemead yard. He plans to flout water restrictions to keep them alive. Photo by Caleigh Wells.

It’s not hard to pick out Michael Ossen’s Rosemead house on his block. His neighbors’ houses feature metal rolling gates in front of concrete driveways. Ossen’s lies between two walls of cypress trees, with azaleas, dahlias and a lush, green lawn. Ripe citrus trees line the front and a dogwood tree blooms in the back.

“A lot of my shrubbery is inspired by the southeastern United States garden. So it's a very unique and fresh mix for Southern California,” he says. “Very green, and very wet.”

Ossen lives with his grandparents and says in some ways, they conserve water. They don’t all shower daily or use a dishwasher, for instance, so in his view, it’s ok that he runs three zones of sprinklers about 10 minutes every day.

“I am unapologetically a water user in this yard. I run these sprinklers in the dead of summer,” he says.

A water calculator that the Metropolitan Water District recommends estimates Ossen’s family uses about 50% more water per person than the average. And most of it is going toward the yard.

Ossen says in his view, the water shortage isn’t a matter of personal use, but a problem of overpopulation. So he is planning to protest the restrictions, keep running his sprinklers every day, and pay the fines if they come. 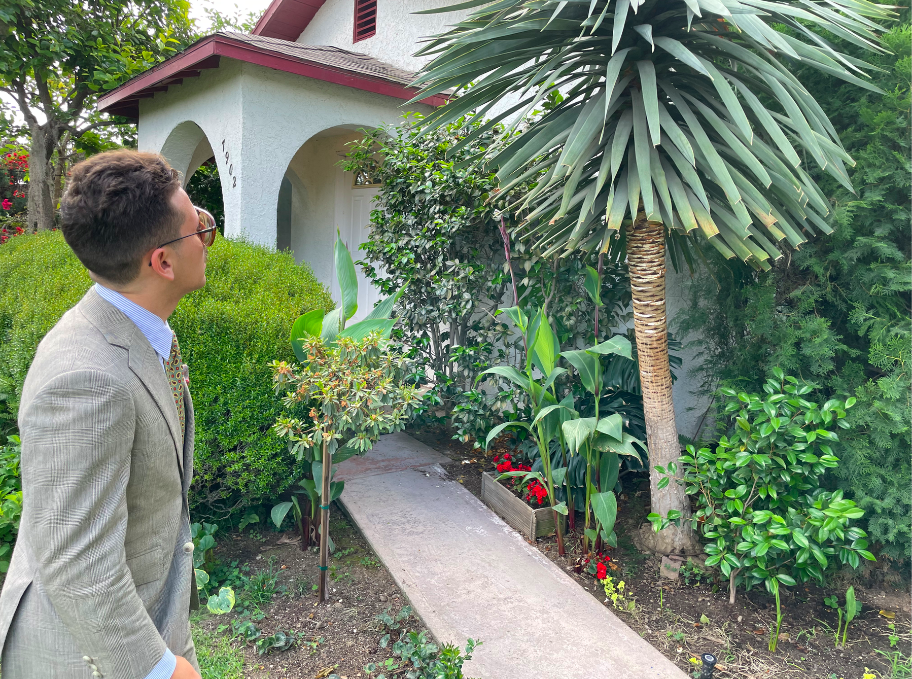 Ossen dislikes the only southwestern native plant in his yard. It’s this yucca that his grandfather planted before he moved in. Photo by Caleigh Wells.

“I grew up saying that you can judge a man by his lawn. So the lawn ain’t going,” he says. “If I sit here and I'm running my sprinklers daily, is someone going to come over and cuff me and take me away?”

So far his utility, the Upper San Gabriel Municipal Water District, hasn’t decided on consequences for flouting the restrictions. But LADWP is planning to charge fines if residents don’t comply. They’re also increasing their number of Water Conservation Response Units to issue citations to people who leave their sprinklers on longer than the allotted eight minutes. Other utilities have more dire consequences planned. If customers of Las Virgenes Municipal Water District in the Conejo Valley violate the restriction three times, they’ll install a device that restricts water flow to your house.

Ossen says he would be surprised if that ever happens to him. In fact, he hopes to eventually rip up the concrete driveway, take out the garage in the back, and extend his water-demanding lawn.

A celebration of the Southwest 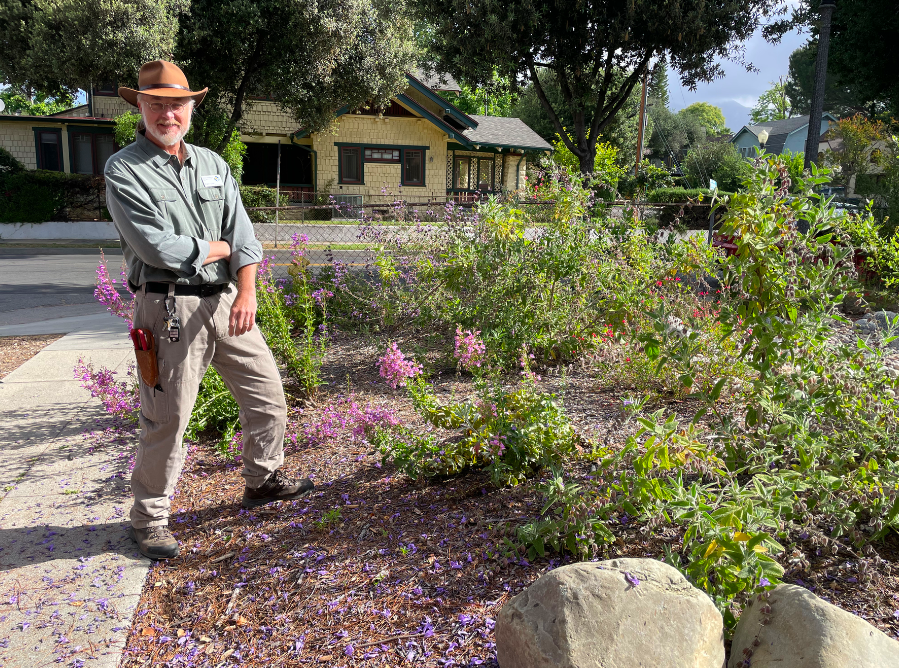 In front of a Pasadena home nine miles to the north lies an entirely different landscape.

Little purple, white and red flowers on big bushes bloom between patches of mulch. Sometimes a pair of hummingbirds stop to pollinate the flowers.

This garden belongs to Master Gardener Roger Gray. He’s a certified California naturalist and a former middle school science teacher, and his yard reflects that.

Gray took advantage of Pasadena City rebates and ripped up the lawn just before the pandemic hit in exchange for this yard. 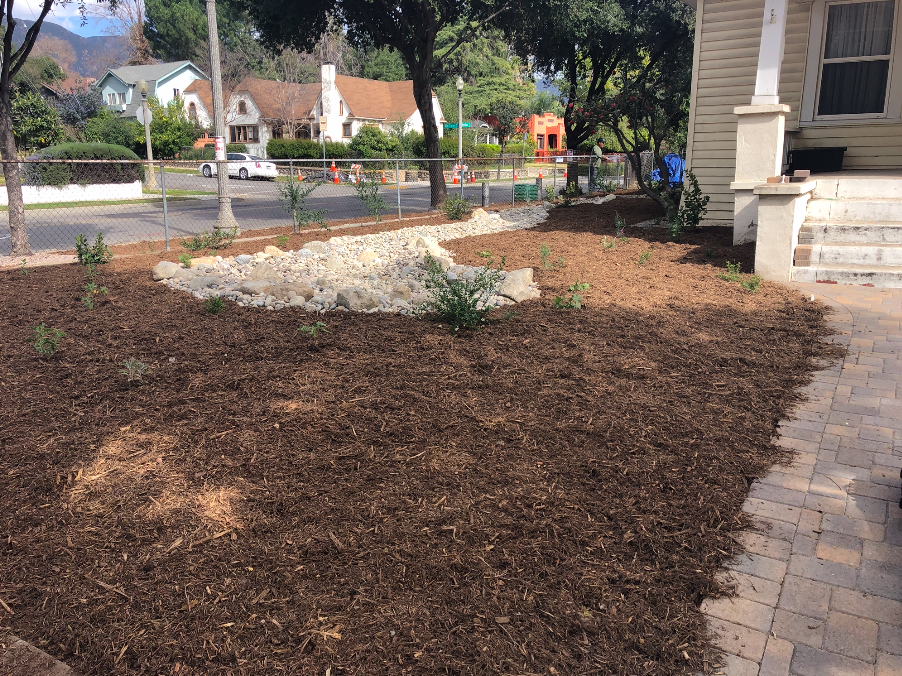 Gray’s yard took months to begin blooming after he planted it in 2020. Photo courtesy of Roger Gray.

He has no interest in trying to maintain a traditional green suburban lawn.

“‘How do I keep this thing that does not belong here and for which there are not enough resources?’ … That is not the question we should be asking,” he says. “A lawn is an unnatural thing. It doesn't belong here. It is put here to mimic the Midwest and back East. And they have different weather, they get regular rain all summer long.”

Everything in Gray’s yard is native to California or somewhere nearby, so all the plants are drought-tolerant. Like Ossen, Gray put this landscape in about two years ago. Unlike Ossen, he’s watered these plants only six times in the entire two years. Today, even with relatively little rain, some of the plants are more than six feet tall.

“Most people overwater all their plants all the time. Forget about the drought. You don't need to water all the time. Water less frequently and more deeply. That's better for the plants. A little sprinkle every day is terrible.” That’s because a lot of the sprinkler mist evaporates anyway, he says. Plus, sprinklers frequently water plants faster than plants can soak it into its roots, so a lot of that water runs off the top of the soil and into the street.

His other secret? He waters his plants by hand, using a hose that’s only turned up halfway.

“They say that the best fertilizer is a gardener's shadow,” he says. Gray deplores automatic sprinklers. “Automatics, unless you have a very sophisticated system, don't know if your soil is wet. They don't know if you have runoff. They can't judge what's happening the way a person can.”

One man waters his yard daily. Another has native plants and hardly ever waters. Southern Californians are taking their own approaches to the drought.

Measure W is meant to raise money to clean and capture rainwater. LA County residents voted to pass it in 2018. Is it making a difference?