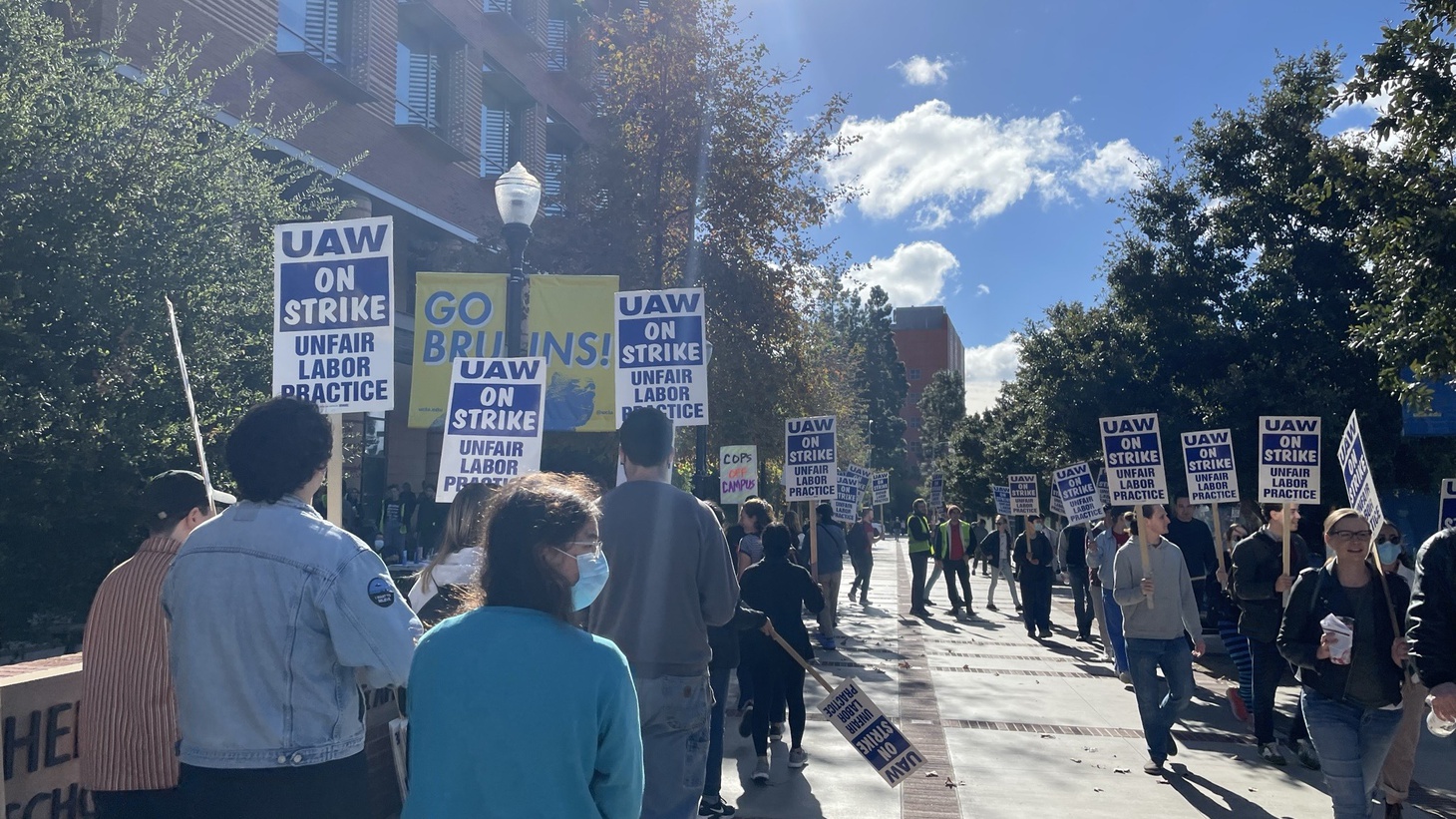 Negotiations between the University of California and the union representing tens of thousands of striking graduate student workers have dragged on into finals week. It’s caused massive disruptions to student learning and evaluation at the conclusion of the term.

What’s the strike about?

Graduate students say they can’t afford to live near the campuses where they study, teach classes, and provide grading support to professors. They’re demanding higher pay and better benefits, which the UC system says it’s offering. But there’s still a gap between what the graduate students – represented by the United Auto Workers union – are asking for, and what’s now on the table.

UCLA political science lecturer Cody Trojan says the strike highlights a larger issue: “The whole point of this strike is because the model of which higher education is run now is really unsustainable,” he says. “People begin as graduate students and they are [teaching assistants] and they're deferring starting families, and being okay with having lots of roommates and saying, ‘Well, I'll have an adult life when I get to 35 or something. And I'll have a family then.’ And then once they received their PhDs, they realized there is no tenure-track, well-paid job for them.”

How is the strike impacting UCLA’s undergraduate students during finals week?

The strikes have caused widespread disruption to student learning and final exams.

UCLA’s Academic Senate sent guidance to professors allowing them to make changes to final exams to accommodate the situation. Among those were options to shorten the length of the final, make it voluntary, or change the format from essay to multiple choice.

Some professors altered their finals. Others, including UCLA sociology professor Christopher Herring, decided not to.

“I could have done a total multiple choice thing and sent it through a machine,” he says. “However, this would precisely prove the idea that we do not need these TAs and that the course could go on as usual, and as planned.”

“I think I'm in the same bind and doing what most professors and lecturers are,” he said, “not carrying on courses as usual to respect the picket line and supporting the graduate student TA's strike, but also not withholding labor in a total sympathy strike.”

UCLA sophomore Sophia Dobry took math and economics finals this week after all her small discussion sections were canceled. She said her economics teacher had been more accommodating to student needs during the test, but that her math teacher didn’t opt to change the final. Days before the exam, she still wasn’t sure who would be proctoring the test, and where she could direct questions.

She adds, “It hasn't been super easy to go over your mistakes on past exams with the TAs gone, and then the professor not being super available. How are you going to learn from your mistakes?”

The University of California is urging professors to grade finals and submit grades, which is often the job of graduate student workers. Some campuses, including UCLA, have pushed back the grading deadline hoping the strike will resolve. It’s not clear how and when grades will be submitted.

If no one enters a course grade, a student transcript can show a class is Not Graded, which can be changed when the grades are submitted. This won’t be an issue for most students long-term, but it could impact those who need grades to maintain visas or scholarships.

UCLA sociology professor Christopher Herring plans to submit grades only for those students. “I don't think we should punish our most vulnerable students,” he said.