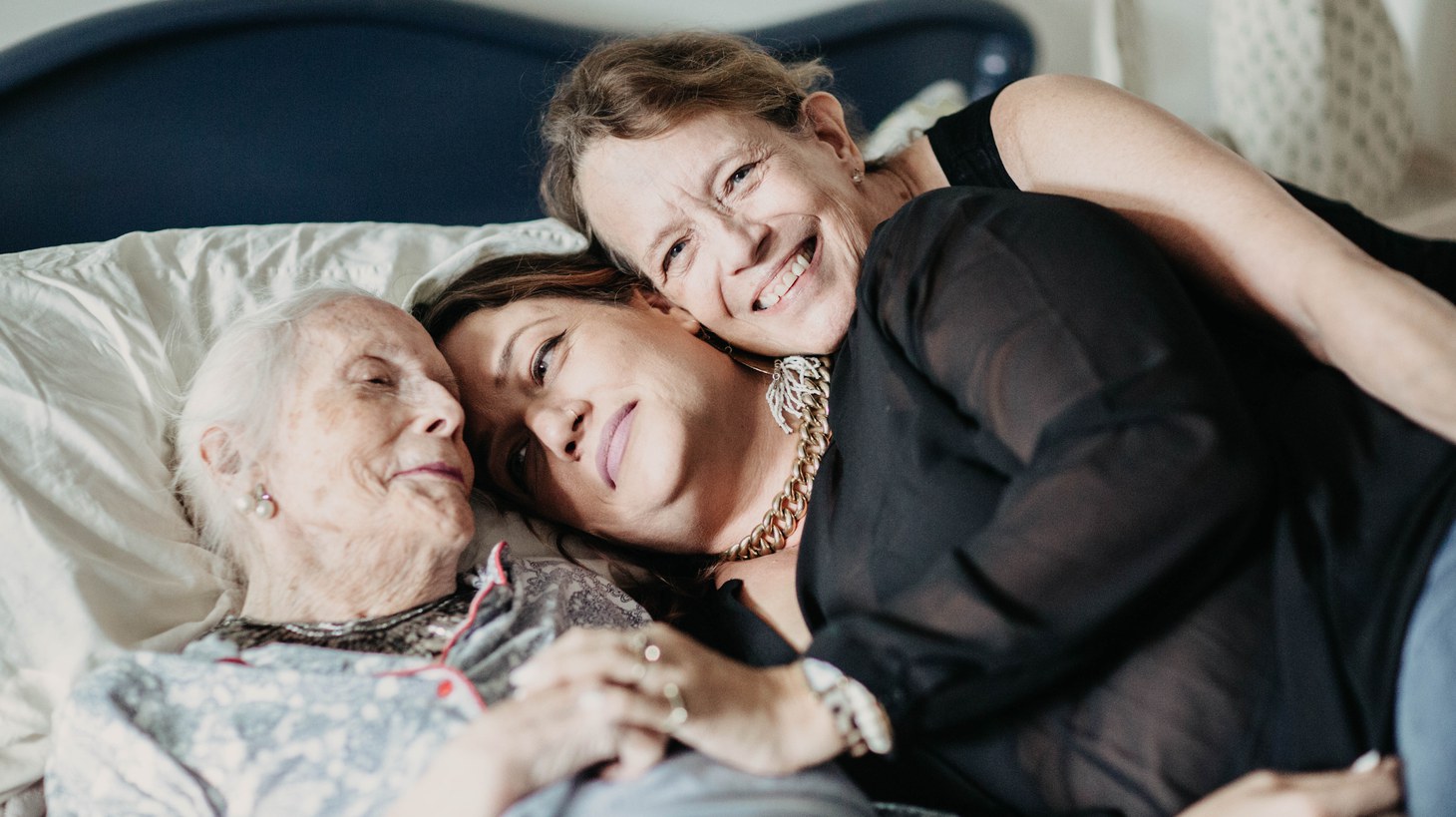 Ninety-nine-year-old Melinda Hearst (left) cuddles with her granddaughter Melinda Alexander and daughter Lian Mann. Mann has hired a death doula to help her mother prepare for the end. Photo courtesy of Lian Mann.

According to one statistic, nearly 100% of us will die someday, but most of us avoid the subject, imagining we’ll somehow know what to do when the time comes. But will we?

“Why not death?” asks LA-based death doula Jill Schock. “We have people guide us through wedding ceremonies. It just makes total sense. I think just the fact that death is taboo, and gives us natural anxiety, is why so many people avoid it.”

Besides the wedding planners, there are alternative care workers to guide us through plenty of difficult experiences: birth doulas, tax preparers, and in Las Vegas, even concierges for dogs. So, yes, a death doula – or death midwife, or end-of-life guide – is not the craziest idea.

In LA, there are about 500 such death doulas, according to the International End of Life Doula Association, an international organization that offers training in the field.

What does a doula do?

Doulas could do practical stuff — paperwork — like helping prepare a will or end-of-life directives, or making plans for the body after death. They could do grief work with the client and their family, or help work through unresolved issues, like that one thing they’ve always wanted to tell their kid. They could do spiritual work, like talking about the big questions of life and what may or may not come after.

A death doula could also just throw a kick-ass party, says Schock. “In LA, we've had bartenders, photographers, musicians, an entire concert set, essentially, for people. I've had a client who bought caftans for everyone who was going to be at this special dinner that he held.” (Schock calls that client “a real good-time guy.”)

Like a lot of death doulas, Schock came to the trade through a personal experience. Her father’s death was hard in all sorts of ways, and made her want to improve the whole process. Now a decade into her practice, Schock says her clients are typical for death doulas — people with terminal illnesses, or older people with dementia.

She, like other death doulas, works to manage expectations — around pain, or grief, or funerals. Each dying process is different, and death doulas help the dying create an experience that is more personal.

“Do you want prayers? Do you want poems? Do you want music?” says Pasadena end-of-life doula Patricia Jauchler. She describes her job as (among other things) dealing with the “squishy emotional things” around dying. Jauchler wants to facilitate moments between the dying and their loved ones that become positive, even sacred.

“You're still going to be sad that the person is no longer there,” she says. “But to hear ‘I love you,’ or ‘Thank you for what you did for me,’ those can be incredibly healing things.”

Like a lot of doulas, Jauchler also helps figure out what the dying person and family want to do with the body after death. Typically a body disappears into the mortuary right away, to maybe pop up again at a funeral service, but death doulas often encourage the family to stay with the body after death. While doulas don’t discourage the use of mortuaries, they help family members see that you don’t have to immediately usher a body away. A doula’s duties could include helping gather family members to come and wash the body, dress it, and have a funeral right then and there. It’s a different kind of party, maybe fewer caftans, but maybe not.

One of Schock’s clients, Lian Mann, has been preparing for her mother’s death for a few years, and when the time comes, Mann says the family will gather with the body.

“It may seem strange, but to me, it’s great,” she says. “We're going to … stay with my mom's beautiful body, and bathe it and shroud it, decorate and sing and dance, and whatever we're going to do. And when we let go of her, she'll be gone.”

How does this personalized experience fit into the larger end-of-life health care industry? Not surprisingly, there’s a lot of interaction between doulas and hospice providers, and some smaller hospices provide similar services – doula adjacent.

Anil Mall runs what he calls “a boutique hospice” in Chino known as Above and Beyond Hospice Care. They handle medical needs, they can help with the wills. But as for that “squishy emotional stuff,” Mall says, “If there's something specific a doula can do that we can’t provide, we'd be happy to bring them on board and take care of the patient's last wishes. For us, that's a huge accomplishment. We want our patients to be comfortable. We want them to be at peace.”

While hospices are usually covered by insurance, including Medicare, death doulas generally are not. Schock charges $150 an hour, and says a family usually ends up paying $1,500 to $2,000.

“I think one of the reasons why there is space for doulas is because hospice isn't supported as much as it could be. And so there are gaps in the system, which is the same on the funeral side as well,” says Schock. “Where are you going to be buried? Or are you going to be cremated? And if you are going to be cremated, what are we doing with your ashes? So there's a lot of questions on the back side. And [without a doula] you don't have a guide to take you through that end of things either.”

Death doulas are just one trend in a larger movement that focuses on a number of ways to restore control over the end of life to the dying and their families. In fact, California’s medical aid-in-dying law, which allows terminally ill people to control the dying experience right up to picking the moment they die, is becoming a part of the death doula service, too. (Schock says many of her clients opt for aid-in-dying.)

And death doulas aren’t just an LA thing, or even just an American thing. Jauchler has been teaching end-of-life webinars through a school in Beijing.

“It spans cultures, it spans religions, it spans everything, because it's the one thing we all have in common,” she says. “We will all die. You know, that commonality makes us all a big community.”

California could make human composting legal. It’s a process by which recently deceased bodies are transformed into nutrient-rich soil.