Close to 50,000 grocery workers across southern California may go on strike this week if union negotiations with four major supermarket chains aren't resolved.

The United Food and Commercial Workers International Union (UFCW) has been negotiating for months with two companies that own four southern California supermarket chains: Ralphs, Vons, Albertsons, and Pavilions.

Albertsons, which also owns Vons and Pavilions, responded to an interview request with an emailed statement, saying, “The results of the strike authorization vote do not change anything; our focus remains on negotiations.” Their goal is “a contract that benefits the employees, the companies, and the customers”.

Kroger, which owns Ralphs, didn’t respond to our request for an interview. 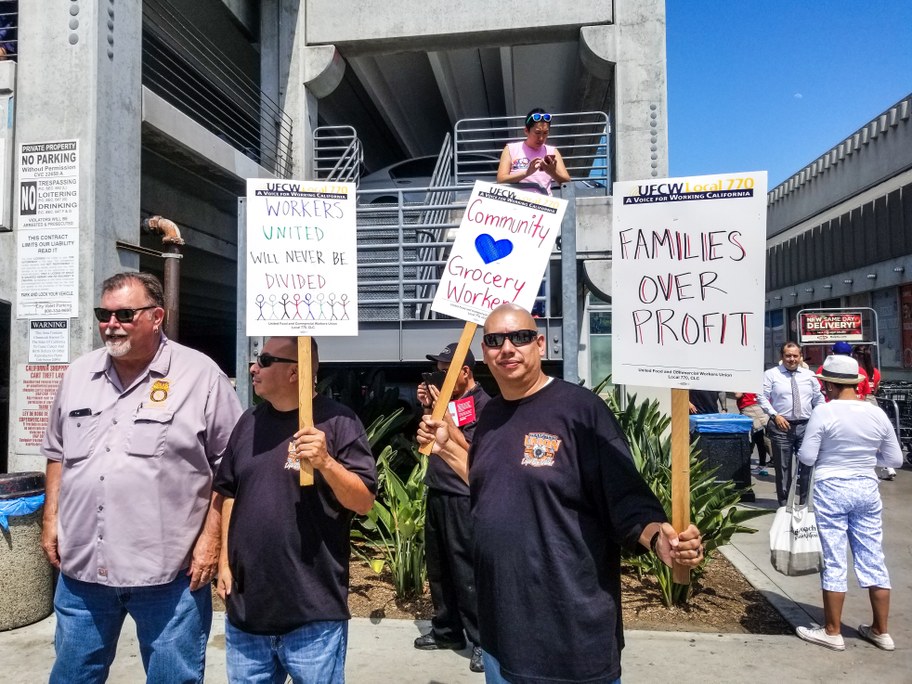 Jesus Neri (right) and Jose Tores (center), members of the local Teamsters union, stand at the back of the UFCW rally outside a Ralphs in Koreatown. An AFL-CIO decision to support the potential UFCW strike means that if the grocery workers do strike, Teamsters members wouldn't make deliveries or pick-ups at affected stores.

The union is asking for higher wage increases for its members, as well as better health coverage and pensions. It’s also taking aim at a two-tier system that places a lower cap on wages for food service workers in the deli and bakery departments.

“Why is it that the bakery and service deli gets paid less? Is it because it’s a woman’s job? I mean honestly, I feel like we women do a pretty good job, and it should be fair pay,” said Karla Barrera, a manager in the deli department who’s worked at Ralph’s for five years.

Even as a manager, Barrera says the pay isn’t enough. “I have two kids that I have to take care of. I’m a single mom. Whatever I bring home pays the bills.” 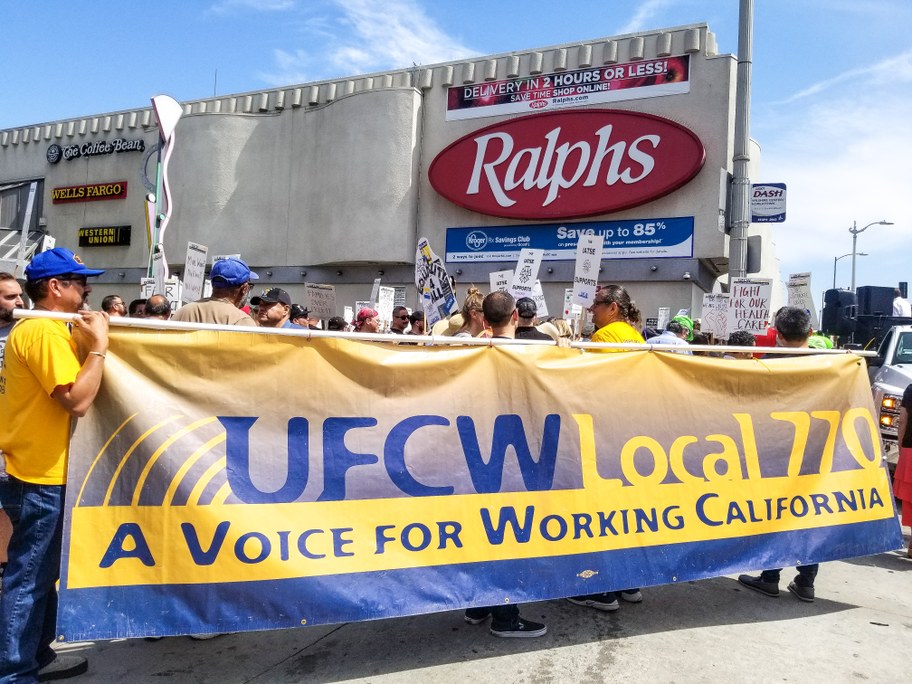 The last time the local UFCW grocery members went on strike was in 2003. It was a massive strike that lasted four and a half months, and was one of the biggest labor actions of its kind in recent history, local UFCW president John Grant said.

For workers who were there for it, the memory of the 2003 strike looms over these negotiations.

Moore actually retired and then came back to work for 40 hours a month, after realizing that she couldn’t live on the pension. She’s now a shop steward at the store where she works in Eagle Rock, and was a picket captain during the last strike.

After workers spent four and a half months on the picket line, the strike ended with an agreement that wasn’t ideal, from the workers’ perspective. Still, Moore says she doesn’t regret striking.

Despite her experience in 2003, Moore voted to authorize a strike this time around, as did the vast majority of her colleagues – the strike authorization vote passed with 96% approval.

Grant said he hopes the strike authorization would place pressure on the companies to make a deal. After the last strike, the companies are estimated to have lost $1.5 billion in revenue.

“People develop habits and a familiarity with stores and the personnel inside of [them],” Grant said. “Once you develop a habit where you can almost walk through a store on autopilot until you find your favorite clerk to talk to, once that pattern is broken, people don’t go back. That happened in ‘03-’04.”

The strike authorization vote doesn’t necessarily mean that the workers are headed to the picket line. Negotiations are scheduled from July 10 to 12, after which the union will likely make a decision about the strike.

Grocery workers could strike in the coming days

Close to 50,000 grocery workers across southern California may go on strike this week if union negotiations with four major supermarket chains aren't resolved.

People who work for Uber, Lyft, Postmates, and DoorDash can control their own hours, but they don’t receive health insurance, workers comp or paid leave. Some like it that...