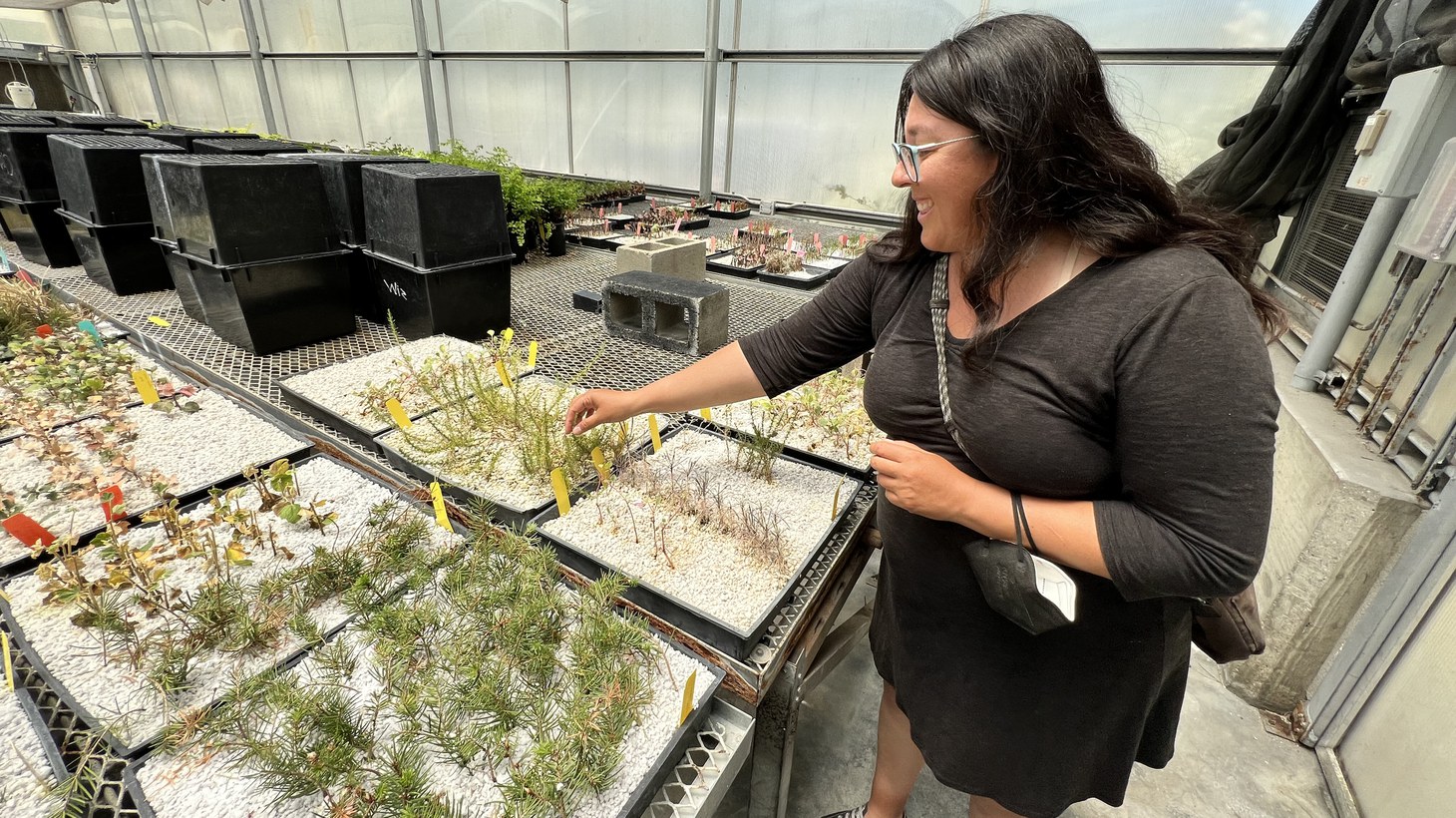 Naomi Fraga, director of conservation programs at the California Botanic Garden, shows some of the native plant samples being grown at the facility. Their cultivation is part of the lab's mission to protect the state's plant biodiversity. Photo by Saul Gonzalez.

When it comes to the diversity of native plant life, no other place in the country can compare to California, home to 6,500 kinds of indigenous plants.

“We have more kinds of plants than any other state in the United States,” says Naomi Fraga, director of conservation programs at the California Botanic Garden in Claremont. “We’re incredibly rich and diverse.”

But about a third of the state’s native plant species and populations, says Fraga, are now endangered or threatened from overdevelopment, competition from invasive species, droughts, and wildfires.

That’s why the California Botanic Garden is dedicated to protecting and showcasing California’s native plants, the largest such effort in the country. It’s work the garden has been doing since its founding in 1927.

One local example of a plant that’s seen its habitat shrink, says Fraga, is the California black walnut.

“This is a plant that used to be abundant in Los Angeles County. [But now] all across the hillsides, and through development and changes, populations have been declining,”says Fraga.

To save native flora, staff and volunteers from the botanic garden regularly travel into California’s backcountry, searching for what remains of the most threatened plants.

When they find them, researchers take plant samples back to the garden, where they can be grown and propagated in its nursery.

“Many of them are very rare,” says Fraga. “They're in very precarious situations, and they could blink out at any moment.”

In case a plant does vanish in the wild, this botanic garden has an additional fallback, a room full of big freezer units from Home Depot. They’re the same freezers many people have in their homes to store bulk quantities of food, but instead of steaks and pork chops, the garden’s freezers are filled with rows of meticulously cataloged and packaged seed samples from hundreds of plant species across the state. 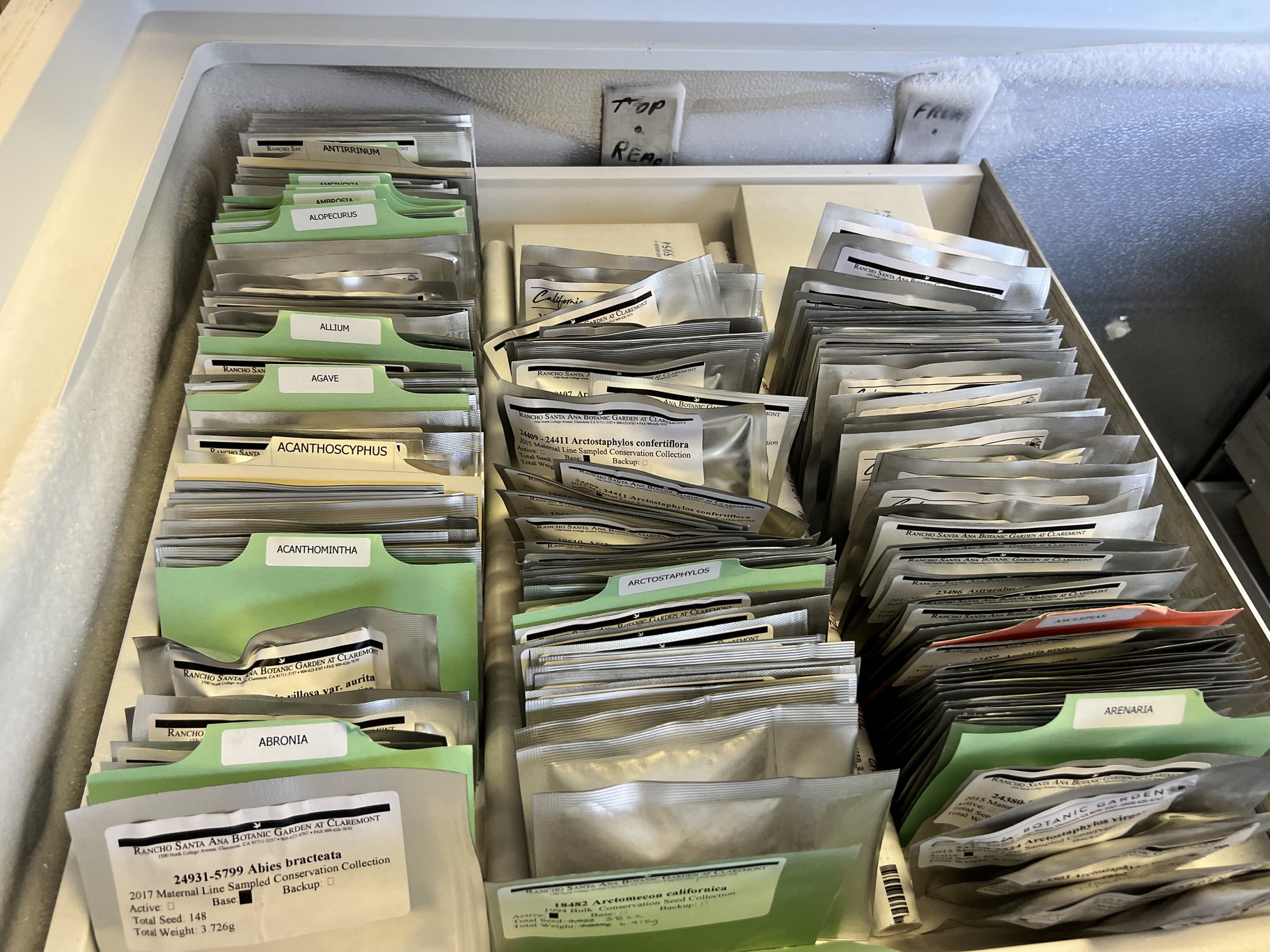 Lab manager and conservation geneticist Carrie Kiel shows the contents of one of the seed storage freezers at the California Botantic Garden's seed bank facility. Photo by Saul Gonzalez.

The freezers at the seed bank are like biodiversity lifeboats. If one of the species stored in a freezer actually went extinct in the wild, the seeds could be a way – maybe the only way – to bring the plant back.

The freezers store seeds from about a third of the state’s native plant life. Eventually botanists at the garden want to store seed samples from all of them, extra insurance against a possible future plant apocalypse.

Fraga says the public can join the fight to protect California plant biodiversity by planting native flora, like sage, milkweed, or California lilacs in their home gardens  or as part of community planting events.

“I dream about that,” says Fraga. “I dream about native plant landscapes across people’s yards, even if you can only do container plants on your balcony. It’s magical to build a garden and see life just sort of arrive.”

Three people who were apparently experiencing mental health crises have been killed by the LAPD this year. Many question where de-escalation teams were.