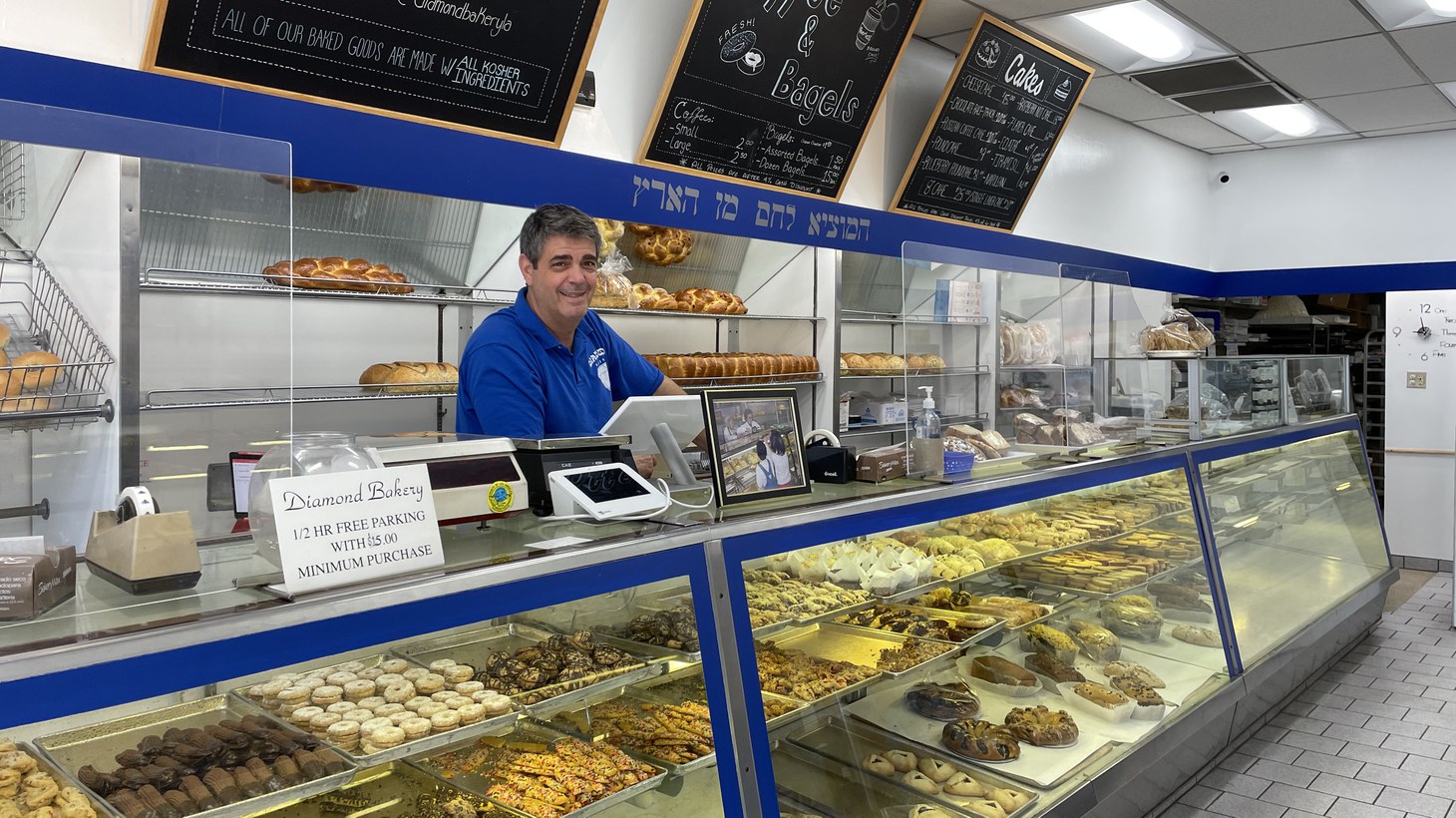 Owner Doug Weinstein stands behind the counter of Diamond Bakery, which was opened by a Jewish Holocaust survivor in 1946. Photo by Robin Estrin.

Jewish Angelenos celebrate Hanukkah with food that’s as diverse as the city itself, from the jelly doughnuts typically eaten by Ashkenazi Jews to Sephardic fried treats to guava jam.

One thing all traditions have in common: frying in oil. That’s a nod to the origins of Hanukkah when nearly 2,000 years ago, a Syrian Greek army destroyed the Jewish temple in Jerusalem. The story goes that a small amount of oil the Jews had to light the temple lasted eight nights instead of just one.

In Southern California this season, Jews are celebrating the miracle with fried food traditions from Europe to Asia to Africa. 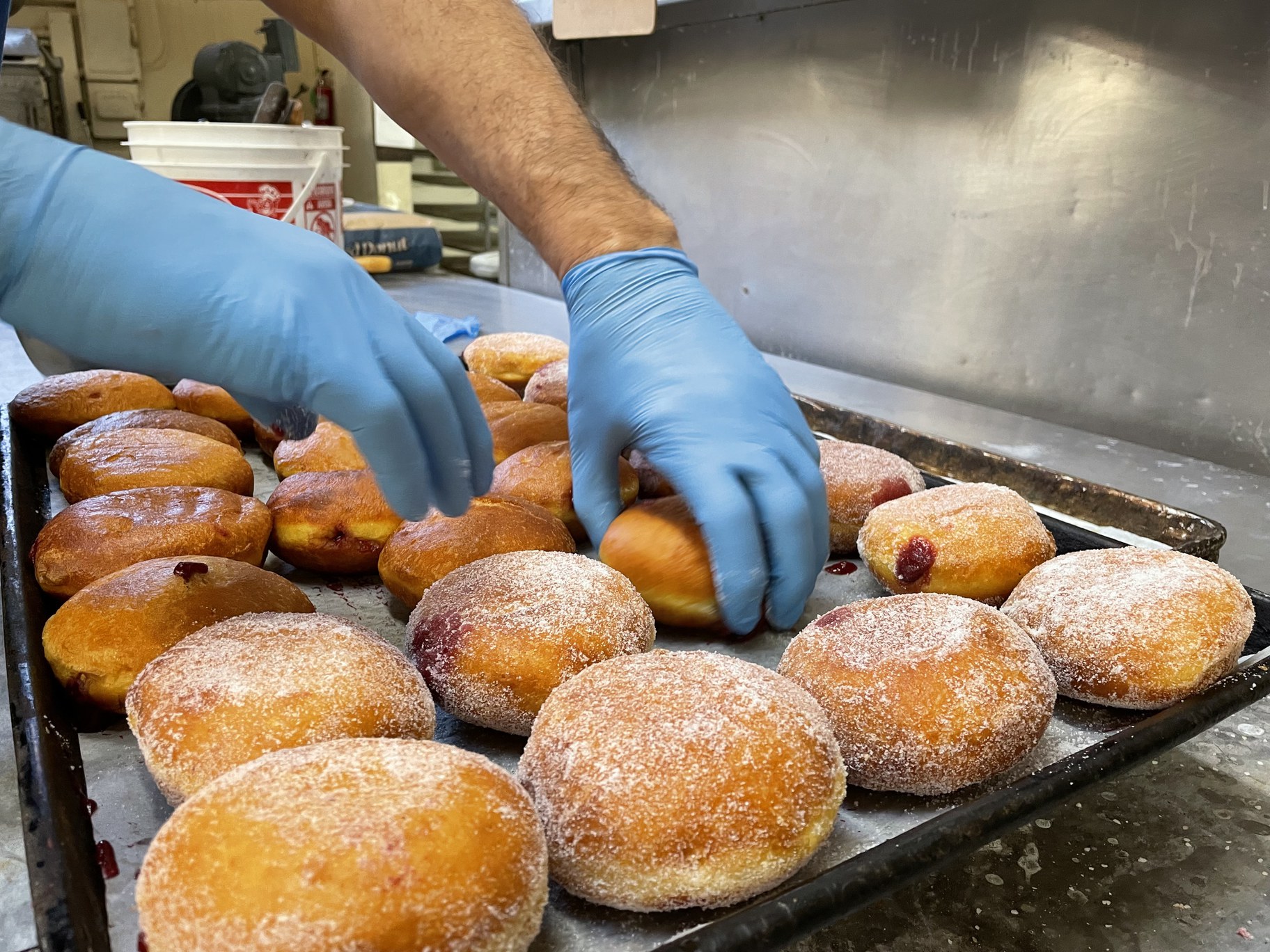 “Smelling like oil until Valentine's Day isn't my favorite thing, but that’s typically how long it takes to get the smell out of my skin from frying latkes and sufganiyot,” says Doug Weinstein, owner of Diamond Bakery on Fairfax Ave. “But the joy it brings other people and fulfilling the tradition – that's what keeps me going.”

Sufganiyot is a donut filled with raspberry jam or custard and rolled in sugar, traditionally made by the Ashkenazi Jews of Central and Eastern Europe. Latkes – potato pancakes often served with sour cream or applesauce – also come from those regions of Europe. 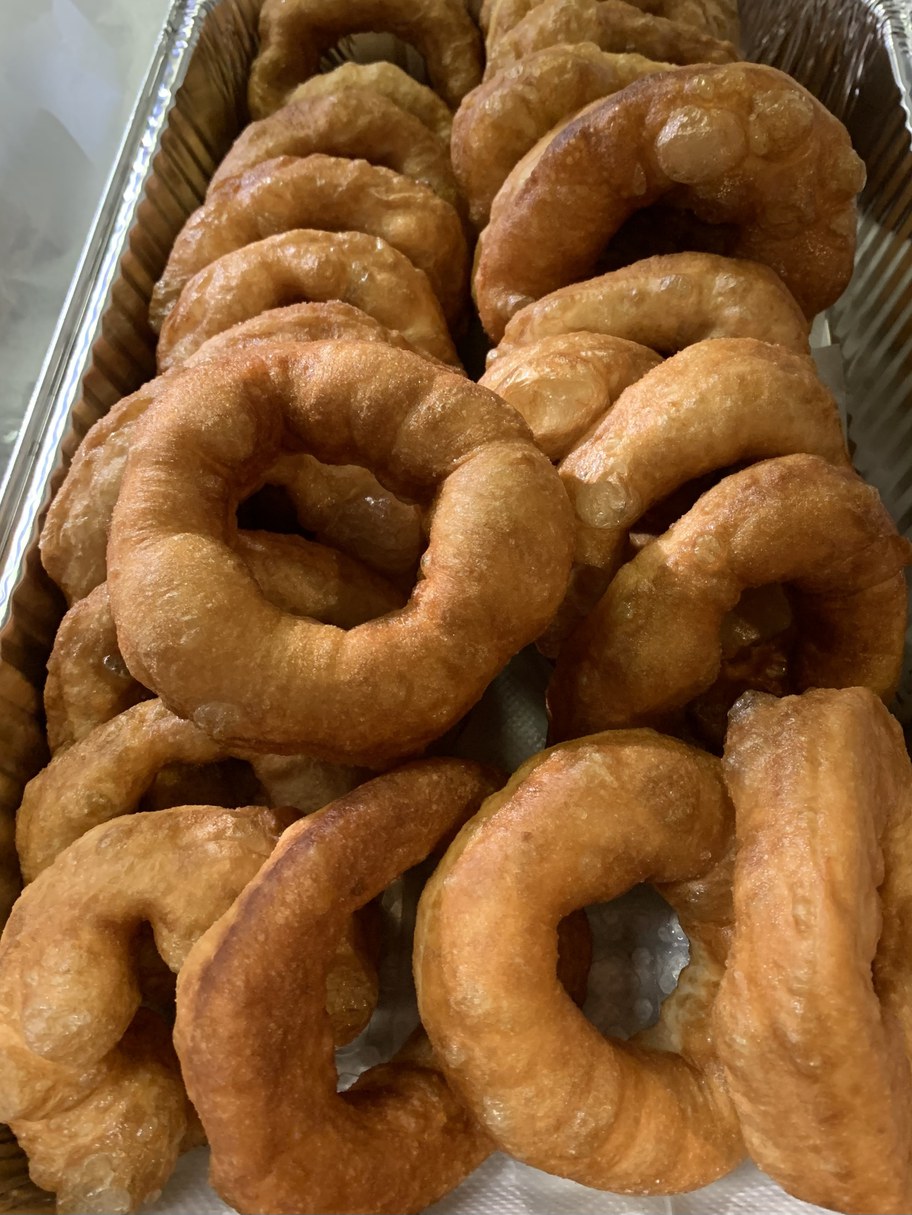 “During Hanukkah, we have what's called sfenj, and it's a Moroccan kind of donut,” says Richard Elgrichi, a member of the majority-Sephardic Baba Sale Congregation, who emigrated from Casablanca. “The sugar is put on the top. It's not on the inside. So it's nothing like the sufganiyot that we have here.”

“In Morocco, it's all over the place. There is a guy that sits cross-legged, and he has a huge pan of oil, and then he dips the sfenj in the oil,” Elgrichi says. “Everybody loves it, and they eat it with tea and it’s really, really delicious.” 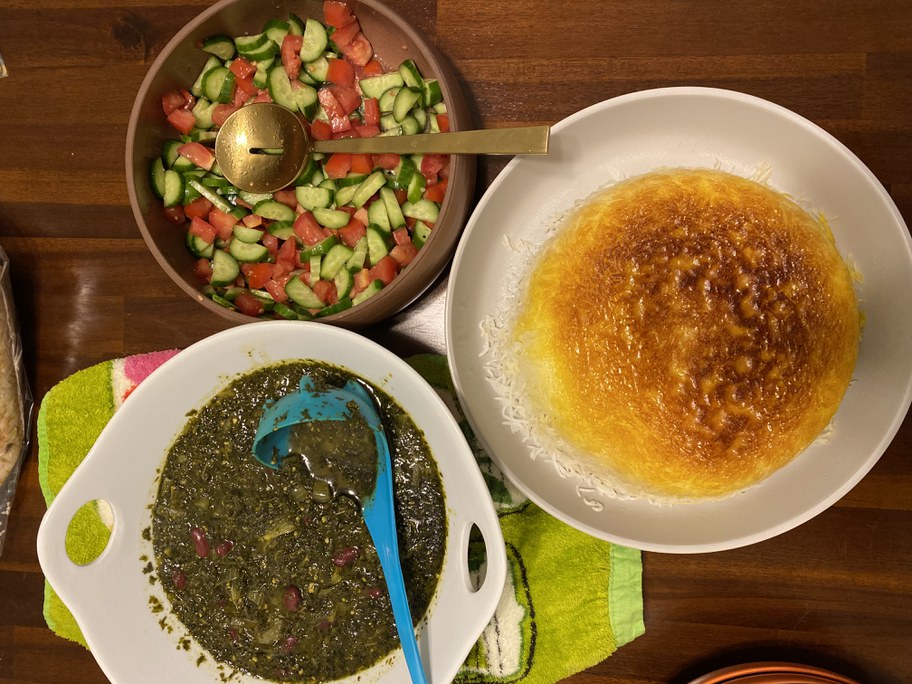 Lobat Abrams, who left Iran as a child due to the Revolution and now lives in Encino, fries potatoes and eggs into balls, or flattens them like latkes to serve for Hanukkah. But “Americans, I think they do applesauce [with latkes], right? I'm not a fan of that,” says Abrams, laughing. “There is no applesauce on the table unless my American son-in-law requests it.”

A staple for Abrams’ Hanukkah meal is called gondi, a stew made with meatballs and matzo balls. “It's a traditionally Jewish Iranian matzo ball soup,” Abrams says.

Angelenos Elizabeth Heitner and Nestor Silva are the chef-owners of a pop-up restaurant called Malli, where their menu pays homage to Heitner’s Jewish heritage and Silva's Mexican and Argentinian heritage.

“The two main foods that we're making for Hanukkah this year are sufganiyot, which we fill with guava jam and a mascarpone filling, and the other one is our sunchoke latke, which we serve with mole amarillo, crema, and fresh apples,” Heitner says.

“Guavas are pretty significant in my household,” adds Silva. “We've always had a guava tree. It doesn't didn't matter where we lived.” 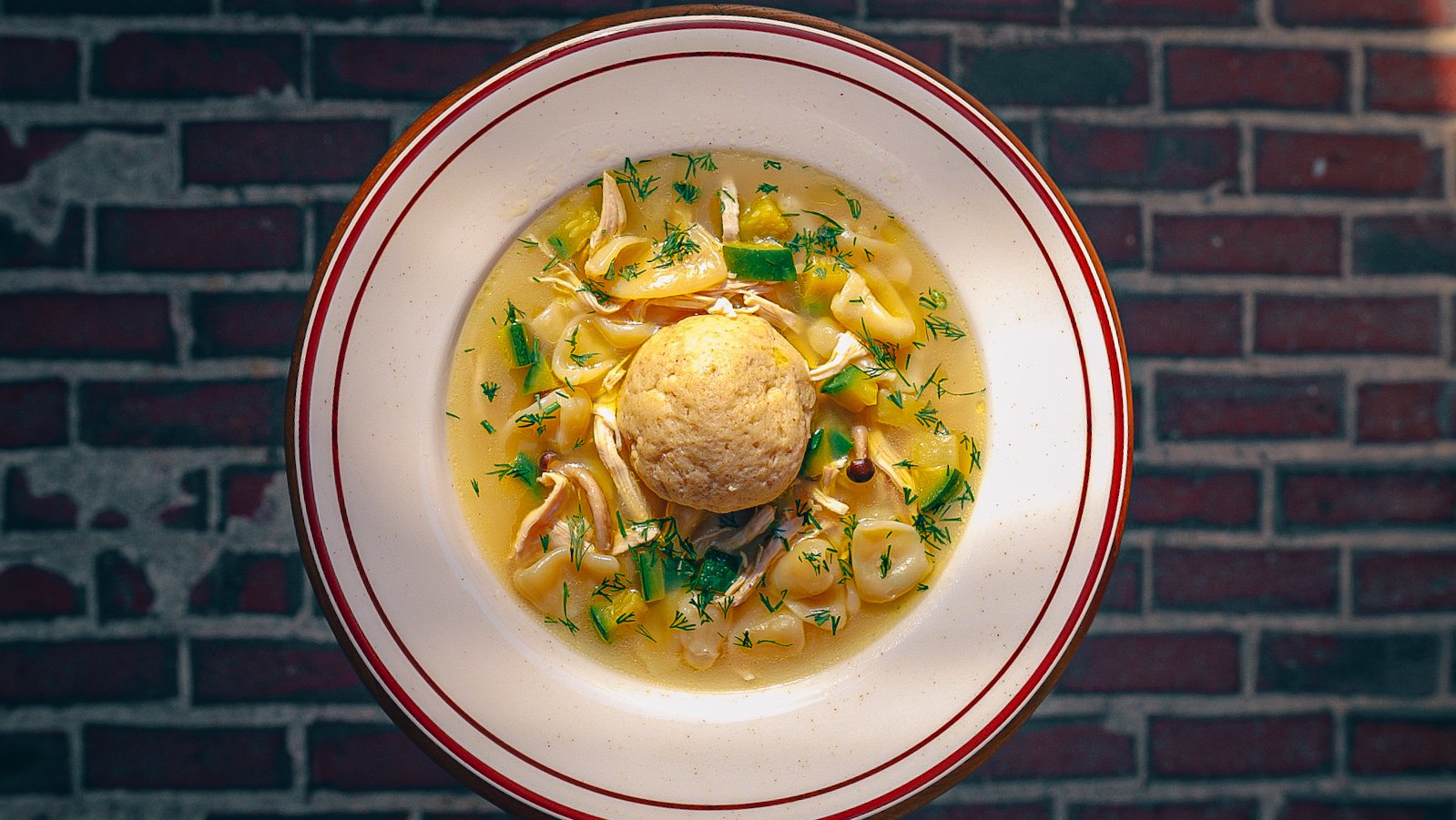 Yangban Society’s matzo ball soup recipe was passed down to Katianna Hong from her grandmother. Today she adds Korean Sujebi dumplings, fresh dill, and roasted chicken, along with potatoes and squash confit in schmaltz. Photo courtesy of Yangban Society.

Katianna Hong, chef and partner of the Korean American restaurant Yangban Society in the Arts District, was born in Korea and adopted into a mixed Jewish and Irish Catholic family in upstate New York. During Hanukkah, Hong and her husband and co-partner at Yangban Society, John Hong, make foods that blend Korean and Jewish cuisine.

Brisket and matzo ball soup are paired with kimchi and a pea shoot and chive salad dressed in soy. Fried potatoes are tossed in garlic butter with dill and scallions. “And then we serve it with whipped creme fraiche and applesauce on the side. Very latke-esque,” she says.

“All our dishes are true reflections of our experiences coming together,” Katianna Hong says. “If you were to join the table, or come to one of our meals, it might look very eclectic. But for us it just feels very natural and very comfortable.”