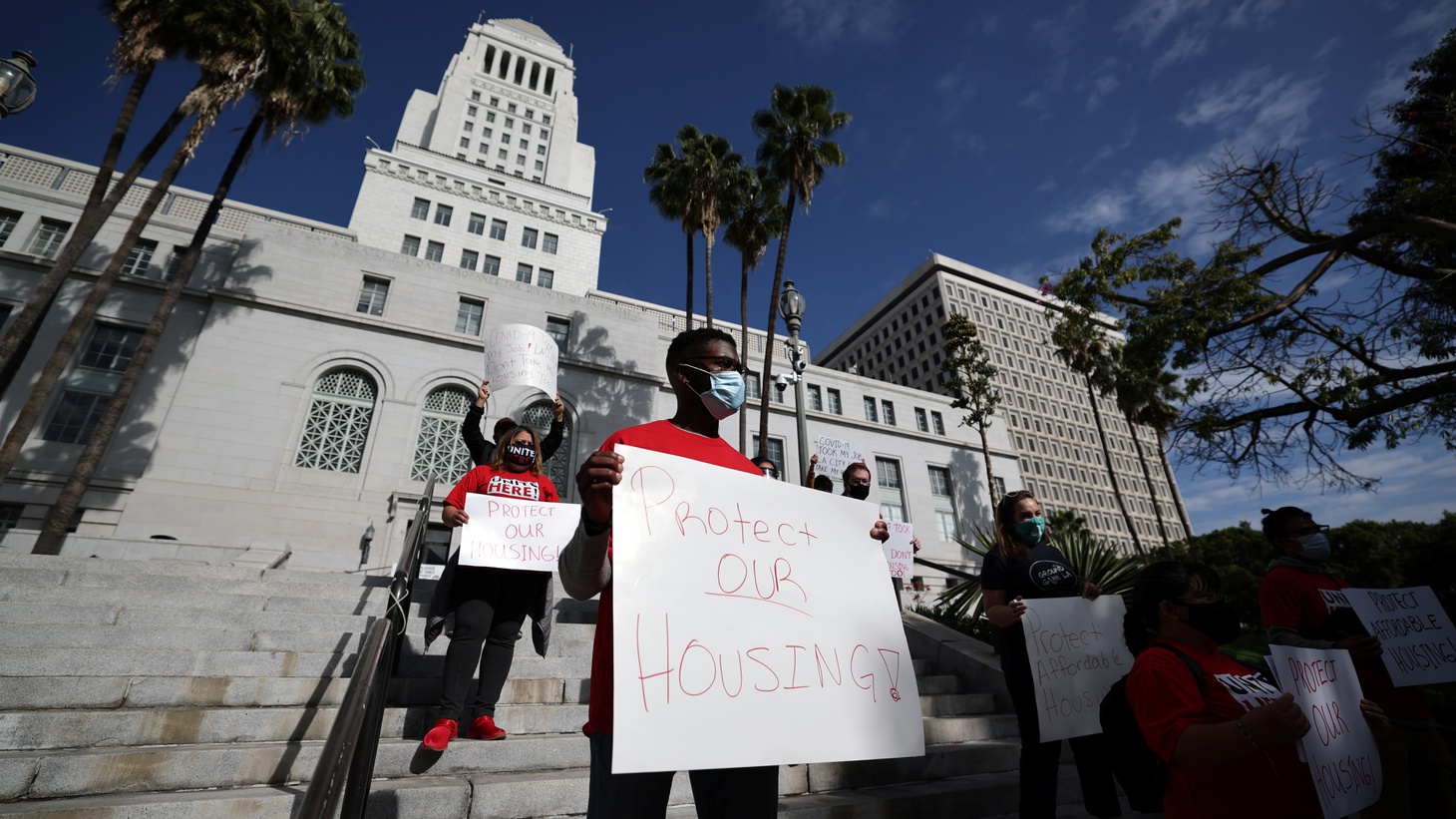 With rents and mortgage rates on the rise, COVID eviction protections set to expire soon, and tens of thousands of people living in shelters or on the streets, housing is always front-of-mind for LA voters.

In the 2022 midterm elections, Los Angeles residents can weigh in on two housing-related ballot propositions — measures ULA and LH. Both seek to increase the city’s stock of affordable housing, but they would do it in slightly different ways.

Properties would be taxed at 4% for sales between $5 and $10 million, and 5.5% for sales more expensive than that. Since this is a permanent tax, these amounts would be adjusted for inflation over time.

According to a report from the city’s chief legislative analyst, the tax would bring in about $600 million to $1 billion annually.

Who will pay the tax?

Many people refer to ULA as a “mansion tax,” since houses in the $5 million and up price range are typically very large. But the tax would also apply to commercial properties such as office buildings, multi-unit apartment buildings, stores, and industrial sites.

According to a UCLA analysis of ULA, about 70% of the properties impacted would be corporate-owned. Researchers estimate that the tax will affect approximately 4% of all Los Angeles’ real estate transactions in a given year.

What would it fund?

Most of the funds from ULA would be used for affordable housing. Some of the money would go towards building new multi-family developments, but the measure would also set aside funds to preserve and rehabilitate existing affordable housing, which is often more cost-effective than new construction.

ULA would also prioritize alternative affordable housing models like community land trusts and limited equity co-ops, which remove housing from the speculative market and put tenants on a path towards homeownership.

Joe Donlin, deputy director of the nonprofit Strategic Actions for a Just Economy, says this can help tenants build equity. “A lot of tenants would prefer to own their building, if they're able to collectively pool their resources or work with a community land trust or a nonprofit, affordable housing provider — buy that building, and then build wealth as co-owners in their property,” says Donlin.

Another big chunk of the money raised by the tax would go towards programs to prevent displacement of tenants, such as rental assistance, a right to counsel for people facing eviction, and support for nonprofits and city programs that enforce the city’s tenant anti-harassment rules.

Similar tenant protection programs were credited with preventing a bigger surge in homelessness during the pandemic, but there is not currently a permanent source of funding for them.

Arguments for and against

Proponents say it will differ from previous city and county efforts to build affordable housing, because it will take a multi-pronged approach and will be monitored by a citizen’s oversight committee and tenants’ council.

ULA also has the support of organized labor, both because it promises decently-paid construction jobs and because workers need affordable housing.

“Not just for our membership, but for the entire labor movement, and the entire working class, it's becoming harder and harder to live in Los Angeles. And this is going to do a lot to solve that,” says Chris Hannan of the Los Angeles and Orange County Building and Construction Trades Council.

Meanwhile, a number of real estate groups, pro-business coalitions, and anti-tax groups oppose the measure. They say other government efforts to build housing, like the $1.2 billion bond measure HHH, have moved too slowly and cost the city too much.

Jon Coupal, president of the Howard Jarvis Taxpayer’s Association, says more private providers should be addressing homelessness. “The city has other alternatives, including allowing some of the faith-based and secular organizations who are affected and actually dealing with this — giving them more free rein. And of course, enforcing things like vagrancy laws,” says Coupal.

Opponents also say that if the tax makes real estate more expensive, impacted owners might choose to pass on their new costs to tenants. The UCLA researchers note that this is unlikely, since transfer taxes are typically paid by the person selling the property.

Measure LH asks Angelenos to approve 5,000 additional publicly-funded affordable housing units in each city council district. It doesn’t guarantee these units will be built or pay for them, it simply raises the cap on how many are allowed to be built moving forward.

Back in 2008, Angelenos passed a similar measure, approving 3,500 additional units for each district. But some of those areas — including parts of East LA, Hollywood, downtown, and South LA — are now very close to meeting that cap. According to a report from the housing department, Council District 14 (which contains parts of Northeast LA and downtown LA) had only 10 units left to build as of May 2022.

Why is there a cap on affordable housing?

The reason Angelenos have to vote on this has to do with a 72-year-old state constitutional amendment called Article 34, which resulted from a racist campaign against affordable housing in California.

In 1949, the Federal Housing Act had just banned segregation in public housing, and white middle-class Americans in still-redlined neighborhoods were largely opposed to it.

In the Northern California town of Eureka, residents began collecting signatures to stop a public housing development in their neighborhood. The Supreme Court ultimately blocked their efforts.

In response, real estate interests launched a campaign to amend the California state constitution, relying on racist rhetoric about neighborhood integration and calling public housing a threat to capitalism. The campaign succeeded, and now Article 34 requires regular public votes for any affordable housing to be built.

When it was first passed, Article 34 blocked a large number of affordable housing developments. It’s the reason, for instance, why Dodger Stadium was built in Chavez Ravine after families were displaced, instead of the public housing promised by the city.

The implementation of the law has had a lasting impact on the state’s affordable housing stock, says Cynthia Castillo of the Western Center on Law and Poverty.

“Article 34 means that California didn't really benefit from an abundance of federal public housing funding that came in the 50s and 60s,” says Castillo.

However, over the years, local governments have found ways to get around Article 34. In Los Angeles, for instance, we vote on measures like LH, which approve a large number of public housing units at once.

These local campaigns typically succeed — there are no listed opponents for LH in the official Los Angeles voter’s guide.

But several efforts to repeal the amendment at the state level have failed, mostly because of community concerns about giving up local control.

However, state Sen. Ben Allen has spearheaded a renewed push to repeal the amendment, and voters will get a chance to weigh in on it with statewide ballot measure in 2024. If it passes, this might be the last time Angelenos have to consider a measure like LH.

Measures ULA and LH both aim to increase LA’s stock of affordable housing in different ways: with new tax funds and a new license to build.

What ‘news deserts,’ Americans must ensure what they’re consuming is legit

The proliferation of politically slanted “news” outlets across the country is leading to a disinformation problem for many Americans. Social media is adding fuel to the fire.