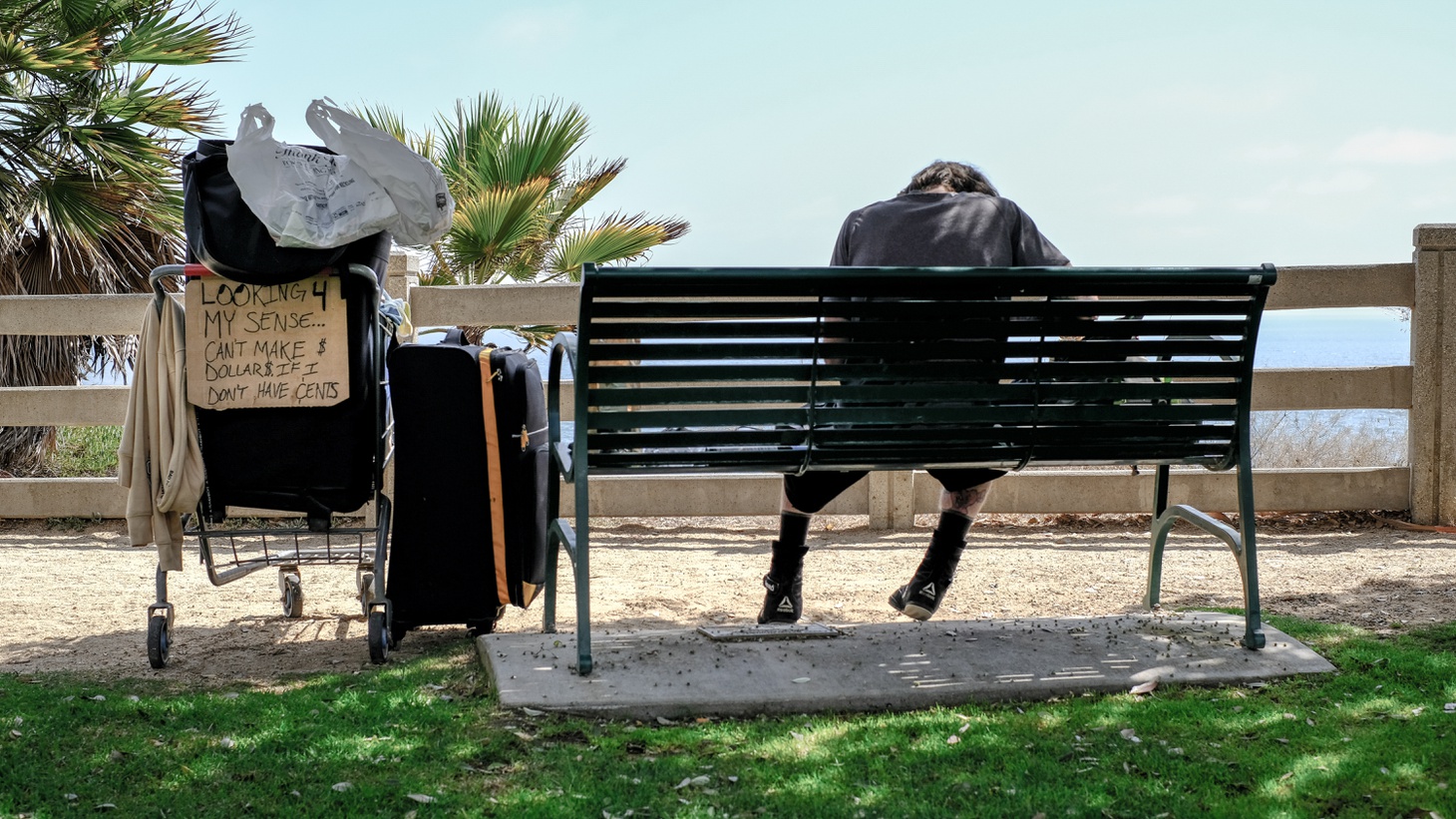 An unhoused person sits on a bench in Palisades Park in Santa Monica. His cart of possessions includes a sign that says, “Looking 4 my sense … can’t make $ dollars $ if I don’t have cents.” July 25, 2022. Photo by Amy Ta.

More Angelenos are living unhoused this year than in 2020, but the increase is smaller than previous year-over-year jumps. Officials say that billions of dollars in pandemic assistance have slowed the number of people falling into homelessness in Los Angeles County.

LA’s annual homeless count, released today, shows that 69,144 people now live on the streets, in shelters, and in vehicles within the county, up 4.1% from 2020.

LA skipped last year’s count because of the COVID-19 pandemic.

It’s not good news. But it would be much worse, according to the Los Angeles Homeless Services Authority, if not for federal- and state-funded efforts to keep people housed during the pandemic and bring unhoused people indoors, as well as local eviction and rent increase protections.

“If there's one thing you take away from these results, we want you to see how policy and investments matter,” said LAHSA Co-Executive Director Molly Rysman. “Tenant protections like eviction moratoria and rental assistance implemented by the County and City of LA help people stay in their homes and not fall into homelessness.”

However, she added, most of those programs will end soon if they haven’t already. In the City of LA, the housing department is proposing lifting eviction and rent freezes by January 2023.

Tenant advocates say they’re already seeing an uptick in evictions. Larry Gross, executive director of the Coalition for Economic Survival, an organization that provides assistance to struggling renters, says LA has only kicked the can down the road.

“Eventually this is all going to catch up to us,” he said. “We should not be patting ourselves on the back for any type of increase in homelessness.”

The big drivers into homelessness — a lack of housing affordability and housing availability — haven’t budged, according to officials with the LA Homeless Services Authority. They say LA County needs an estimated 800,000 additional housing units over eight years to catch up to demand.

Other California municipalities’ counts were a mix of good and bad news. In San Diego County, homelessness has jumped 10% since January 2020. Sacramento County’s unhoused population increased by a whopping 67% since 2019. Meanwhile, homelessness in the City of Santa Monica decreased 11% since January of 2020, going from 907 people to 807. And San Francisco’s unhoused population has decreased by 3.5% since 2019.

It’s likely that the latest tally of LA’s unhoused population is a lowball estimate at best, just like previous years. The numbers are based on an annual headcount that typically begins with thousands of volunteers walking LA’s streets, adding up people, tents, and makeshift camps over three nights. That’s followed by surveys and months of data crunching to arrive at the final numbers. They also add in the number of people living in temporary shelters.

The count doesn’t include people couch surfing, for example, or otherwise living outside the federal definition of homelessness but still without a stable place to live. On top of that, this year the pandemic made it particularly difficult to calculate unhoused families and young people between 18 and 24 years old, according to LAHSA, because many of the special access centers serving those populations were closed during the Omicron surge, when the count was conducted.

Homelessness is up in LA County, but less sharply than past years

The results of LA’s annual homeless count show a 4.1% increase in the number of people living on the streets and in shelters countywide since 2020, and a 1.7% increase in...

‘Being Future Being’: Indigenous show unites people and nature

The world premiere of Indigenous choreographer and activist Emily Johnson’s immersive piece, “Being Future Being,” takes place at The Broad Stage from September 8 to 10.

Food pop-ups are a popular way for chefs to reduce overhead costs while building a following. The Compton soul food duo behind Trap Kitchen pioneered the model nearly a...