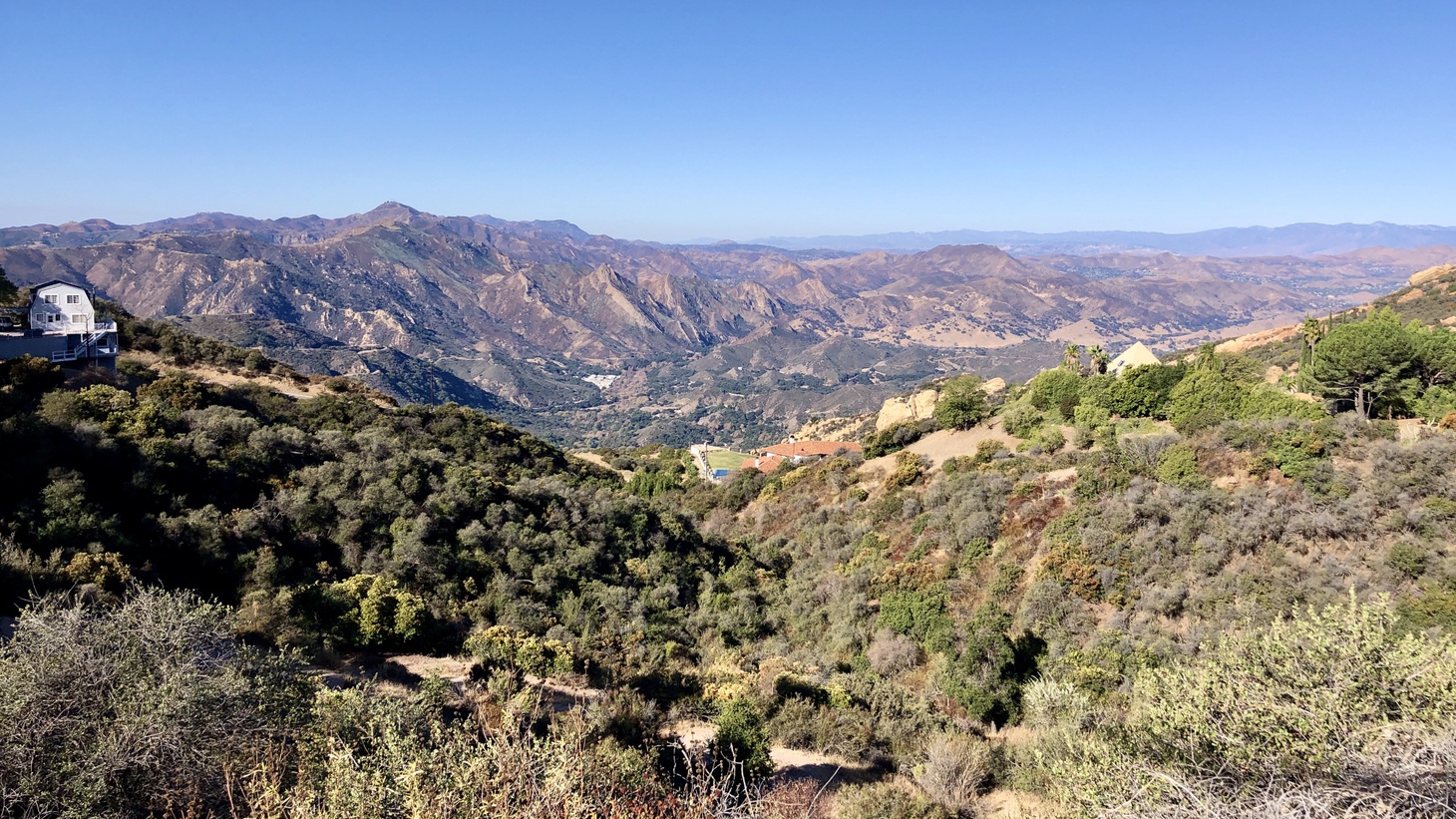 Malibu hills are seen from Piuma Road. The city is a mix of upscale and rural homes. The Malibu City Council is pursuing a plan to reserve shelter beds outside city limits and offer unhoused people transportation to that location. Photo by Amy Ta.

Aaron Marshall started camping near the Malibu library last week after walking 14 miles from Venice Beach, seeking safety. While he found Malibu peaceful compared to the chaos of LA, he said, “It’s really stressful to just keep walking around all day. So a shelter would be nice.”

But Marshall, 27, is unlikely to find a shelter in Malibu any time in the foreseeable future. The Malibu City Council recently voted unanimously in favor of a plan to reserve shelter beds somewhere outside city limits, and offer unhoused people transportation to that location.

It’s still too early to say where the beds might be, or where the money would come from to pay for them. As preliminary as the proposal is, however, it’s already drawing criticism from some advocates and neighboring jurisdictions.

In an email, attorney and unhoused advocate Gary Blasi asked, “If Malibu can get away with this, why can't cities band together to build a massive camp in the desert (there is empty land around Manzanar), and then offer to bus unhoused people there before they arrest them?” Manzanar, in the Owens Valley, is one of the sites where Japanese Americans were incarcerated during World War II.

LA County Supervisor Sheila Kuehl, meanwhile, in a statement to KCRW called the proposed policy a “flagrant abnegation of the city’s responsibility to all its residents.”

But Malibu Councilmember and Mayor Pro Tem Bruce Silverstein, who’s also an attorney, argues that legally Malibu doesn’t have any responsibility to create beds inside city limits. “When it comes to the question of what ought to be done to assist or facilitate people who are living unhoused in Malibu,” he says, “the answer is there is no legal answer. So it's a question of, ‘What does the city wish to do?’”

During public comment at a recent virtual city council meeting where several options were discussed, including building a shelter inside the city, the answer from callers was clear: Put it somewhere else.

“I think that if you build it, they will come,” said Gina Eckstein, echoing others’ concerns that a local shelter would draw more unhoused people to the area.

Malibu accounts for a small but growing fraction of the more than 66,000 people estimated to be experiencing homelessness throughout LA County on any given night. According to the most recent count by the LA Homeless Services Authority, roughly 239 people sleep unsheltered in the beach city, up from 161 in 2016.

The vote to pursue beds in another jurisdiction isn’t primarily intended to improve the lives of unhoused people in Malibu, Silverstein said during the council meeting, but rather to regulate public space. A federal court ruling bars the city from arresting or ticketing people for camping on public property unless shelter is available. Concerns about public safety around unhoused encampments, as well as fire hazards (Malibu is particularly vulnerable to wildfires) and other environmental issues led city officials to consider different shelter options in the first place.

Malibu isn’t the first city to pursue this type of policy. Last year Calabasas struck an agreement with a facility in Van Nuys to keep one bed open 24 hours a day for the estimated two people experiencing homelessness in Calabasas on any given night by last count. Beverly Hills, which had an estimated 19 people experiencing homelessness as of 2020, has also outsourced beds through a nonprofit in Hollywood.

Santa Monica Mayor Sue Himmelrich has a different philosophy when it comes to creating services and affordable housing within city limits. The idea that assistance could draw more unhoused people to the area, she said, is “a risk that I personally am willing to take.”

“The people who come here incrementally to get our services, if they’ll take a roof over their head, I’m happy to house them,” she said. “If each of us took responsibility for the people in our jurisdiction, I think it would be a lot easier for all of us to have a comprehensive approach.”

These types of differences aren’t just between cities. Even the City of LA’s 15 council districts have different approaches to creating shelters and enforcing anti-camping laws, and council members are often reluctant to provide beds to people from neighboring districts.

Aaron Marshall, who walked from Venice Beach to Malibu, said he gets where Malibu city officials are coming from. “I guess there’s a bad stigma attached to homelessness,” he says. “I understand why they try to push us out.

He adds, “But if they could put anything close enough for us to get to on foot, that’d be nice.”

City officials in Malibu recently voted to explore setting up shelter beds for unhoused people outside city limits. Is that legal? And is it right?

Anaheim officials say drug dealing, illegal gambling, and prostitution are happening at two motels on Beach Blvd. The City Council has set new rules for the motels to keep...