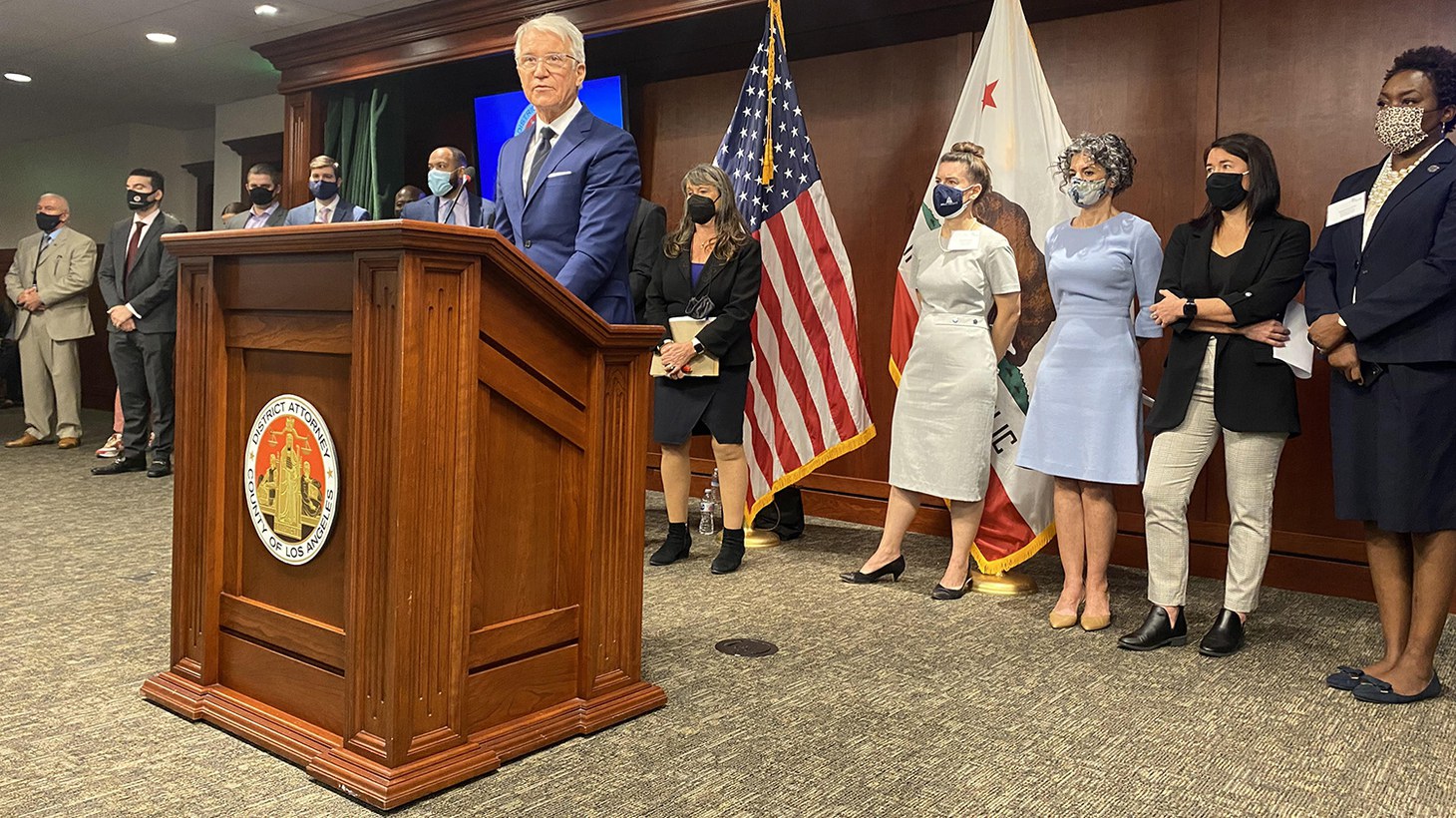 With other progressive district attorneys from across the country behind him, Los Angeles County District Attorney George Gascón holds a press conference to mark his first year in office. He used the occasion to respond to critics and to promise supporters that he would continue with his criminal justice reforms. Photo by Saul Gonzalez.

It hasn’t been a great couple of weeks for Los Angeles County District Attorney George Gascón. His own employees — the Association of Deputy District Attorneys in LA — voted almost unanimously (97.9%) to support a recall effort against him. They joined former LA Police Chief Charlie Beck, once a supporter of Gascón, who also favors recalling the the D.A. from office.

Then there are revelations of recent recent jailhouse recordings of a transgender woman who sexually assaulted a 10-year-old in 2014, bragging about the incident. Gascón had favored trying the woman, now 26, in juvenile court instead of adult court, where she got a far more lenient two-year sentence. Now Gascón has retreated from that position, saying he made a mistake.

Take all of this together, plus growing public anxiety about crime in LA, and it’s adding a lot of momentum to the campaign to oust Gascón. So far the recall has amassed $1.8 million. Recall supporters have until July 6 to gather well over 500,000 signatures to qualify a recall measure for the November ballot.

“I want George Gascón to be replaced as district attorney because he is functionally, with his policies, endangering the public,” says recall campaign co-chairman Steve Cooley, who was district attorney of LA County from 2000 to 2012. “He does that through his many, many directives that basically show great empathy and sympathy for criminals, especially violent and serious criminals, murderers.”

But Gascón’s defenders argue that people like Steve Cooley are bent on turning LA County’s current D.A. into a soft-on-crime stereotype, one that ignores big parts of Gascón’s biography, like his decades as a Los Angeles Police Department officer before becoming a prosecutor.

Christine Soto DeBerry is executive director of the Prosecutors Alliance of California, which supports progressive district attorneys. DeBerry believes the campaign to unseat Gascón is part of a larger effort by right-wing and law enforcement groups to stop long-overdue reforms to the criminal justice system.

“A big majority of the funds coming into these campaigns are from police associations, police lobbying money,” says DeBerry.

She believes these groups oppose Gascón and others district attorneys like him to protect their jobs and political clout, even at the expense of needed criminal justice reforms.

But some recall supporters blame their fears of a crime wave squarely on Gascón.

“In December, I was held up at gunpoint at my office, and they stole my property and they ransacked my office,” says Sami Charchian. He’s attending a recall petition signature drive at an Italian restaurant in Beverly Hills. “And then I also had my home robbed.” 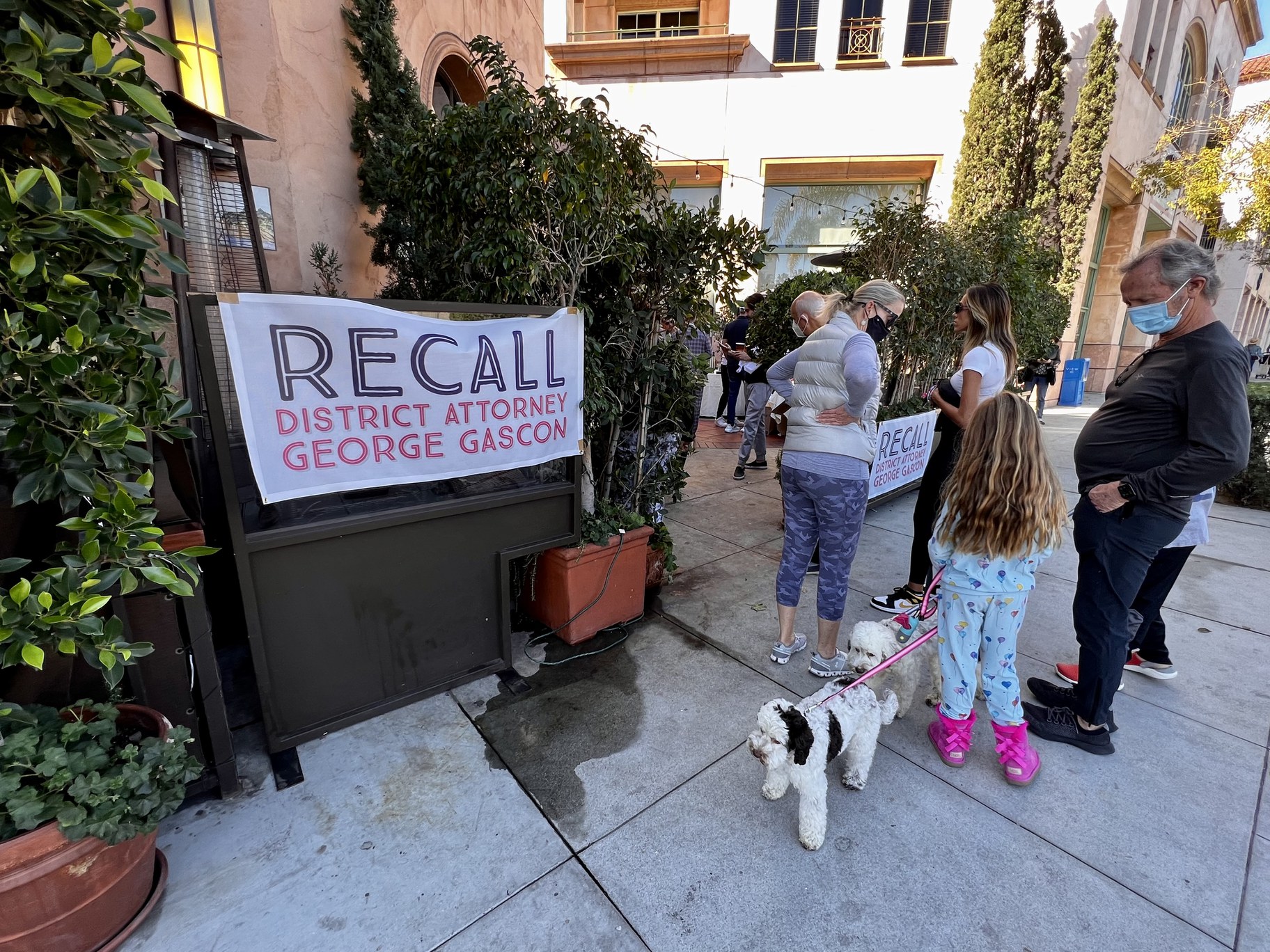 Everyone at the drive believed Gascón’s criminal justice reform policies had helped create a climate of crime and insecurity in LA.

Charchian believes Gascón criminal justice reforms contributed to his experiences as a crime victim because criminals feel they will be lightly punished if caught and prosecuted in Los Angeles County.

“I blame him for all of it,” says Charchian. “You know, there needs to be consequences for criminals.”

It’s a big change in a little over a year.

When George Gascón was sworn in as D.A. of Los Angeles County in December of 2020, he promised to fix what he said was a broken criminal justice system that victimized poor Black and Latino defendants without making the public any safer.

“LA is the poster child of the failed tough-on-crime approach,” said Gascón. “The status quo hasn’t made us safer.”

The reforms included banning the prosecution of minors in adult court, a prohibition on seeking the death penalty, ending cash bail, and preventing prosecutors from seeking enhanced criminal penalties for defendants.

An earlier recall campaign failed last year when organizers, who were split into different factions, couldn’t get enough voter signatures within the deadline.

Cooley is unsparing in his criticism of that effort. 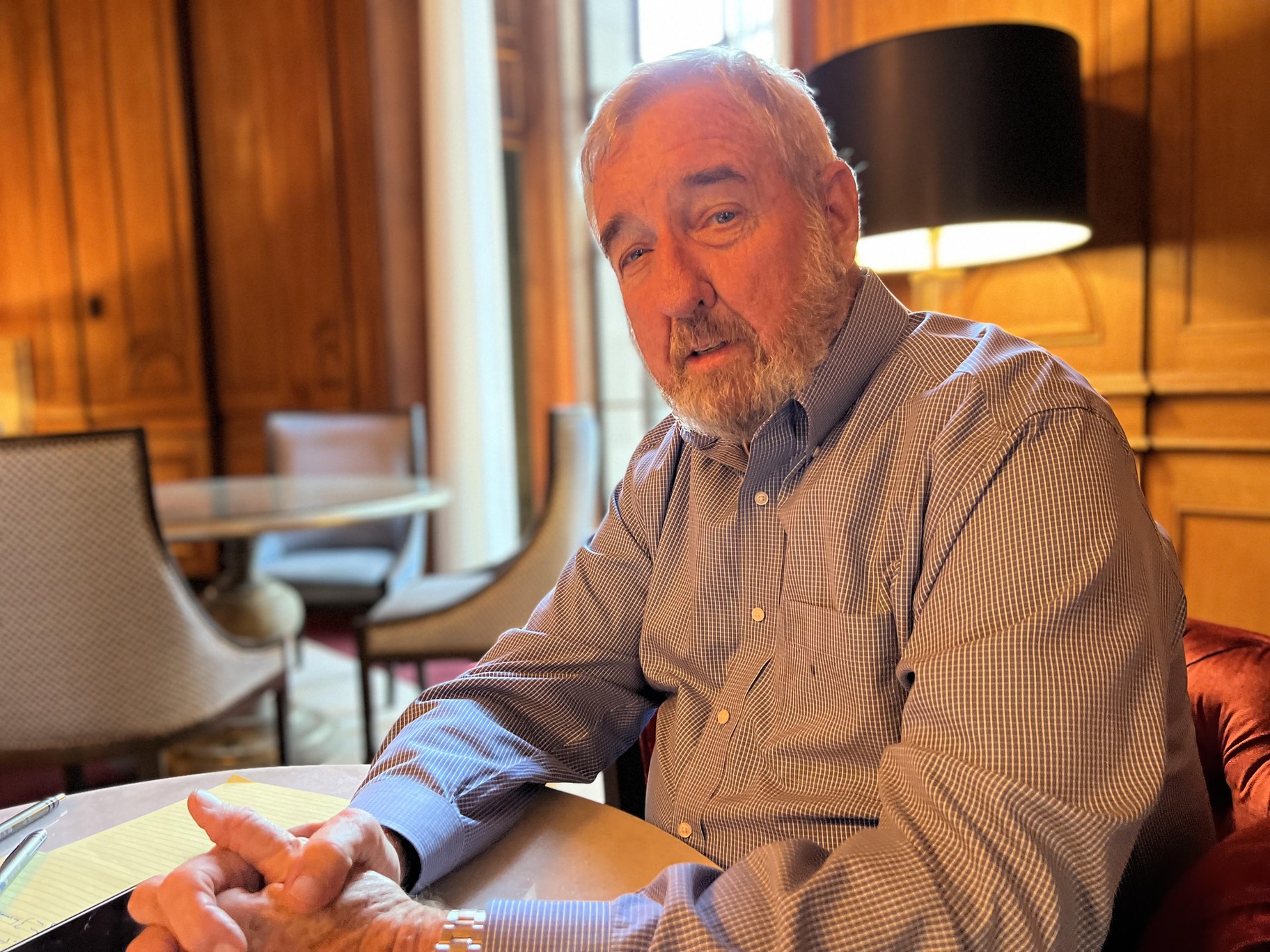 “They were amateurs,” says Cooley. “They didn't really know what they were doing in the big scheme of things. They had no experience in running elections.” But the current recall effort, he says, is better led, better organized and better funded, with a war chest of nearly $2 million and growing.

Cooley also acknowledges that the recall campaign benefits from the media’s focus on high-profile crimes in recent months, like the home murder of a prominent philanthropist and wife of a legendary music executive.

Cooley says such incidents have encouraged LA County voters who haven’t worried much about crime in their neighborhoods in recent years to support Gascón’s recall.

“And by that I mean Beverly Hills and the West Side,” says Cooley. “I think you're going to need, across the board, individuals that feel this is directly affecting me and I fear for my children, my family, my neighborhood, my community and to a certain extent, my county.”

Meanwhile Gascón and his allies are fighting back.

When the D.A. marked his first anniversary in office, more than a dozen progressive district attorneys from across the country joined Gascón for a press conference.

Each D.A. came to the microphone to praise Gascón’s reform efforts, then Gascón spoke, directing some comments to his critics.

“Rather than turning every tragedy into a political football and blame game, I ask that those people join us,” said Gascón. “We can do better and go further if we all work together.”

But some of Gascón’s allies feel that the D.A. has been flat-footed and not aggressive enough in explaining his reforms, threatening to lose his case for changes in the court of public opinion.

“I would suggest using surrogates like myself,” says Sam Lewis, executive director of LA’s Anti-Recidivism Coalition, which fights to end mass incarceration in California. A former inmate himself who benefited from rehabilitation programs, Lewis says Gascón needs to find people who can talk in personal terms about the toll the criminal justice system has exacted on poor people of color. “People who have gone through our criminal justice system and have righted their moral compass, in many instances, not because of the system, but despite the system.”

Perhaps sensing a change in public attitudes, Gascón appears to be retreating from some past positions. He now says that in some cases, he will consider prosecuting juveniles accused of using “severe violence” as adults, and seek life sentences for some defendants without the possibility of parole. He vowed to ban those practices when elected.

And here’s an issue that hasn’t been resolved. Who would replace Gascon if the recall qualifies for the ballot and the D.A. is voted out?

“I have told people at this stage that no one should be out there campaigning or declaring,” says Cooley. “Because what will happen is those people are ambitious and will be fighting each other instead of Gascón.” But Cooley doesn’t give a definitive "no” when asked if he would seek to campaign for his old job as district attorney of Los Angeles if Gascón were to be recalled.

“Never say ‘no,’” says Cooley. “But you wait and evaluate and make a decision at the right time and you do it for the right reasons.”

Can George Gascón fight off a second recall attempt?

A second attempt to recall LA District Attorney George Gascón has more money and more support than the last one.

A new bill in the State Senate seeks to increase the amount of money granted to people leaving prison from $200 to closer to $2600.

“All of these women … are some of LA's best jewels and absolutely deserve their due and celebration,” Eater LA’s Mona Holmes says of the nominees for this year’s James Beard...