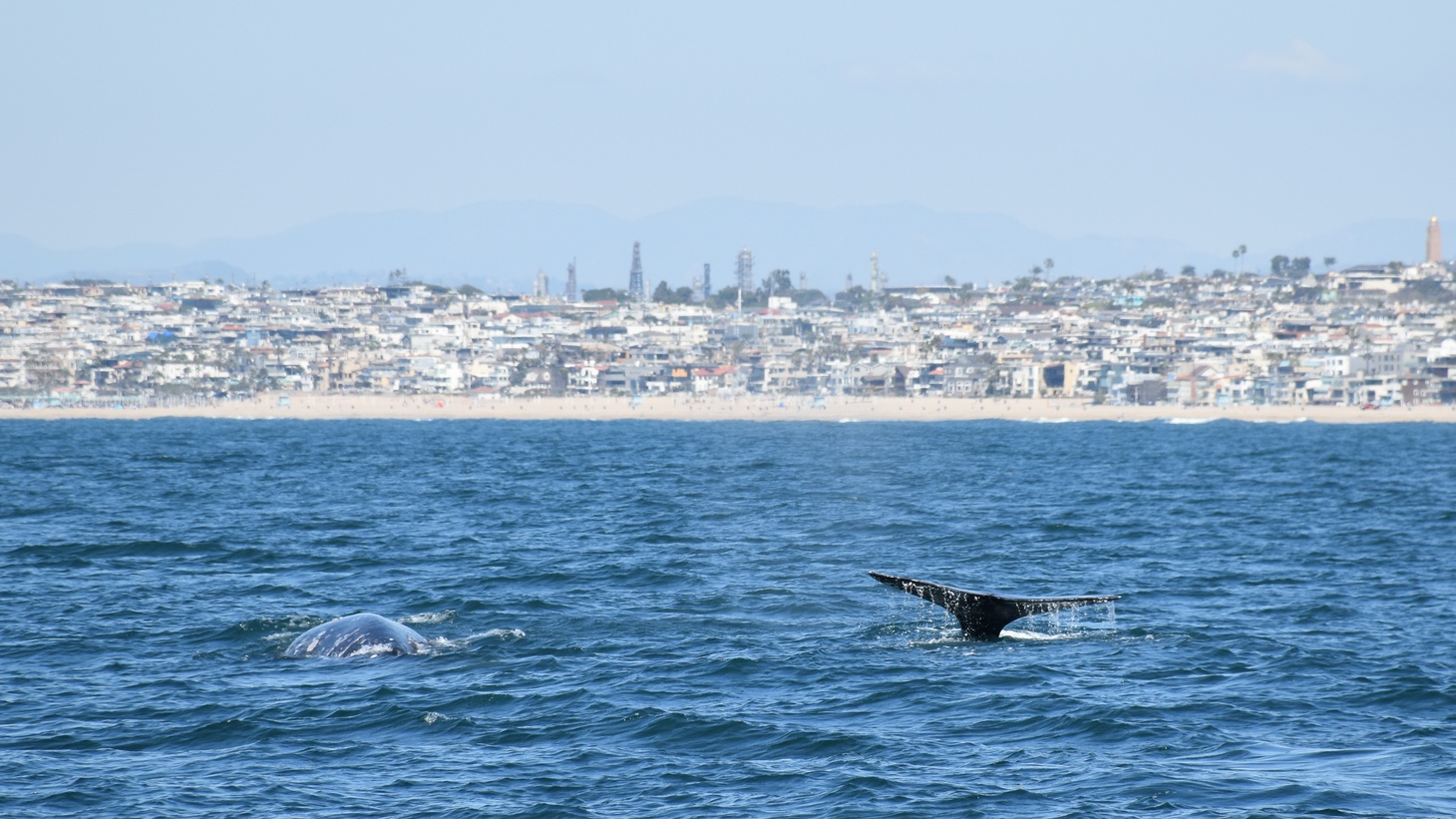 Two gray whales swim off of the South Bay beaches in Santa Monica Bay in March 2022. Photo by Susan Valot.

If you spend a few minutes looking at the Pacific Ocean from shore in Palos Verdes or Malibu along the coast between December and May, there’s a good chance you will see the typical heart-shaped blow of a gray whale. They’re headed northbound from Mexico to Alaska, traveling a sort of whale freeway off the coast of California.

But your chances of spotting a blow or flip of a tail is a little lower now than it was a few years ago. Gray whales have been struggling since 2019, and the federal government has declared 2019 to 2022 an ongoing “unusual mortality event” for gray whales. Spotters have seen fewer whales and more than normal have washed ashore dead. 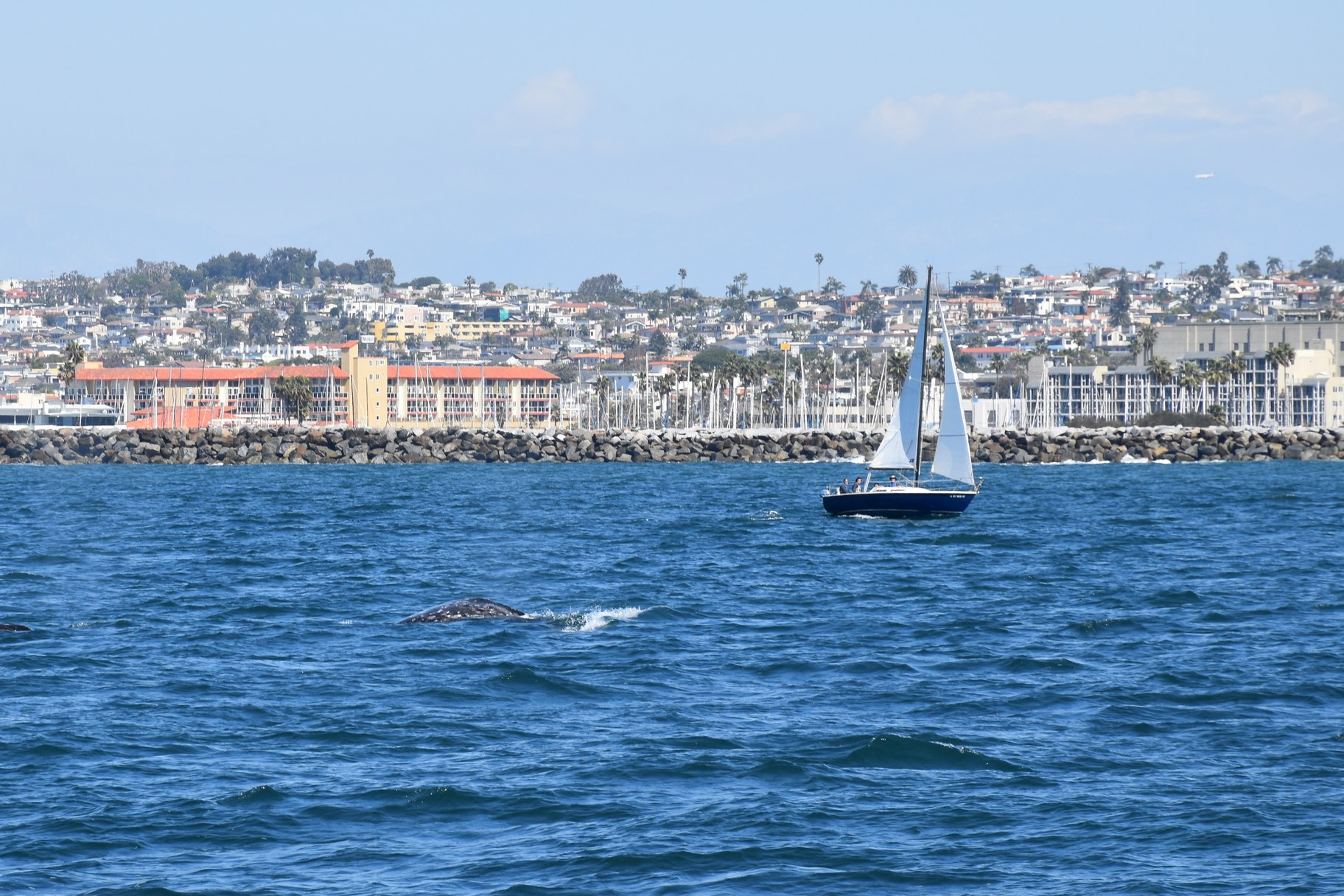 A gray whale surfaces in front of a sailboat just off of Redondo Beach Harbor in March 2022. Photo by Susan Valot.

Volunteers with the American Cetacean Society LA’s Gray Whale Census and Behavior Project hope to help by providing year-to-year tallies of whales spotted from the Point Vicente Interpretive Center in Palos Verdes. They sit for hours looking through binoculars and scopes for any sign of the migrating whales off the coast.

They are not trying to find out how many total gray whales there are, since most zip past on the other side of Catalina Island, but rather to collect baseline data about the migration, the longest of any marine mammal, taking the whales about 10,000 miles round-trip.

“Our population has dropped down between 2016 and 2020 from about 26,000 gray whales to just above 20,000. And I predict that it will drop down probably at least another couple thousand in the assessment that they just completed,” says Alisa Schulman-Janiger, who is the director of the count.

That’s nearly a 25% loss over just a few years. And no one is certain what is causing it. 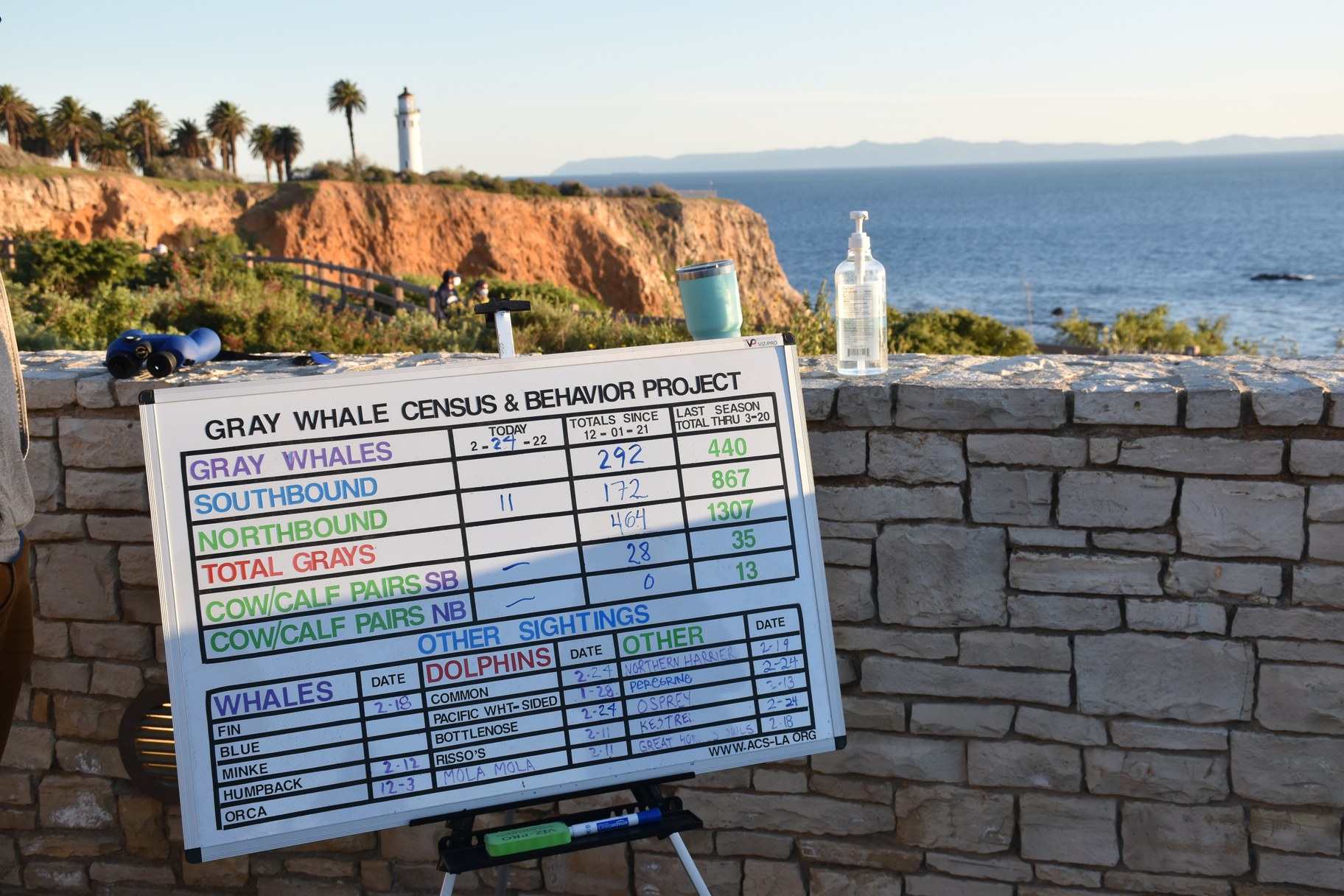 Volunteer gray whale counters at the Point Vicente Interpretive Center in Rancho Palos Verdes keep a running tally of gray whales spotted this season compared to the previous season. They also note other whales and wildlife on the tally board. The Point Vicente Lighthouse, built in 1926, is in the background. Photo by Susan Valot.

“We haven’t found a single, solitary thing that kind of sticks out,” says Justin Viezbicke, who is in charge of the NOAA team that goes out to whale strandings in California. “We have seen a number of animals that are emaciated or what we would consider skinny – overall, their health status isn’t doing very well. And so that’s one of the things that we’ve seen in these animals. But we’ve also seen ship strikes, entanglements, some animals that don’t really tell us anything.”

Viezbicke says the recent backlogs at the ports of LA and Long Beach might have actually helped the whales. Fewer ships were moving, meaning they were less likely to accidentally hit whales.

One theory centers around climate change. With ice surfaces in the Arctic melting, the whales may not have access to as much of the food they normally eat.

But there are other theories, too. Another unusual mortality event happened in 1999 and 2000, but the gray whales recovered from that. This time “could be kind of a largely natural cycle where the population’s abundance increases to some level above what the environment can support, and then they get these die-off events, and then they start to rebound afterward,” says NOAA’s Aimee Lang, who studies gray whales.

The problem is it’s really hard to tell what is climate change related and what would happen anyway. 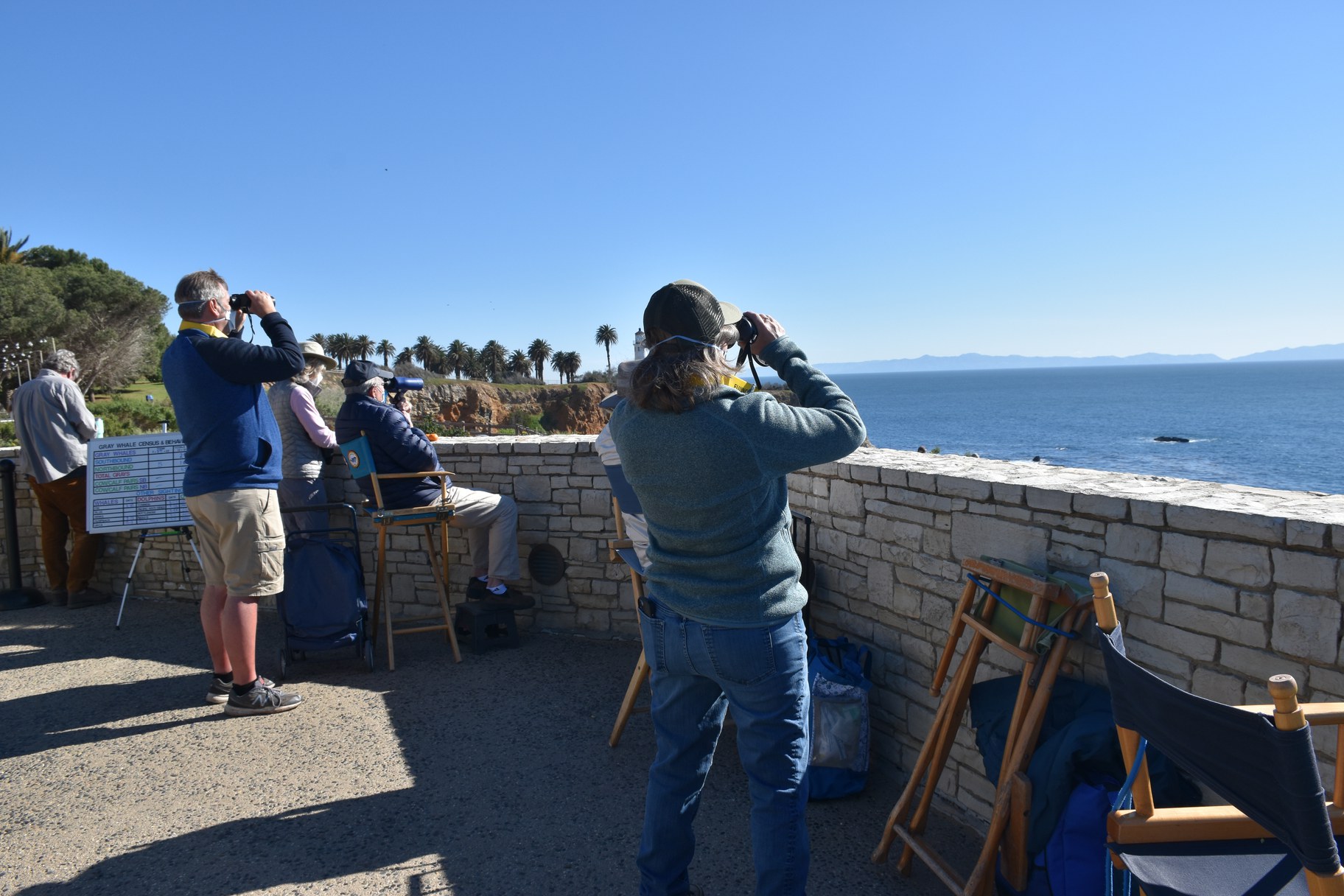 So the volunteers at the Palos Verdes gray whale Census are helping to gather whatever information they can about the whales. This season they’ve seen fewer gray whales, but the number of whales that look unhealthy has been down, too.

“Are they in good condition? Are they really skinny? Are they very robust? We’re also trying to count the number of calves that we see go by, which is the calf productivity, and that could be a sign of how healthy the population is,” says Schulman-Janiger.

How do you spot a skinny gray whale? Look at its head behind the blowhole. That’s where they store their fat, so there should be a hump there.

“A skinny whale has a depression there,” says Schulman-Janiger. “So it will look like the whale has what we call a ‘peanut head,’ a great big head and a neck. And you shouldn’t see a neck on a whale.” 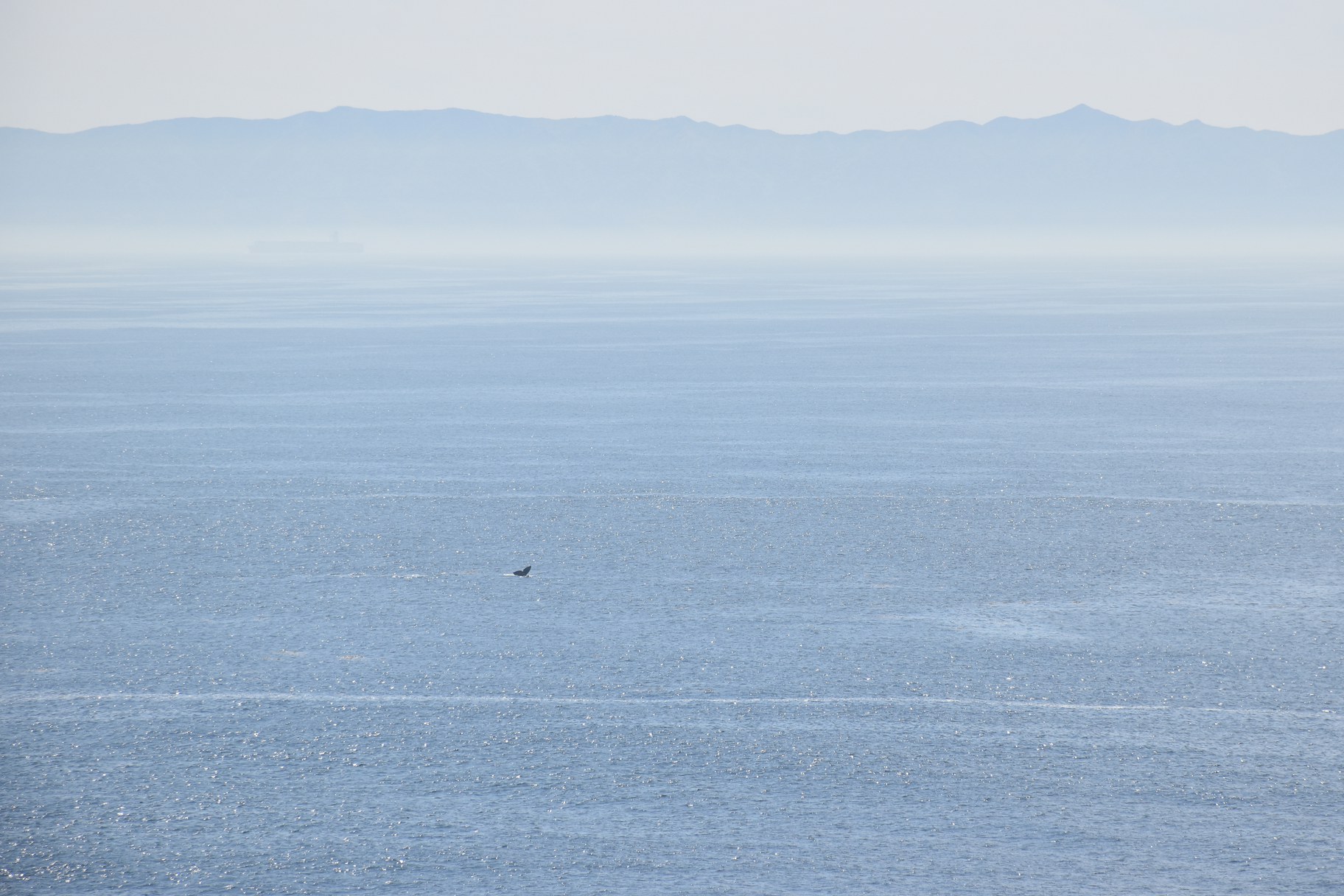 A lone gray whale flukes, showing its tail, in the channel between Palos Verdes and Catalina Island. Photo by Susan Valot.

In Rancho Palos Verdes, groups of counters show up every day, filling shifts from 6 a.m. to 6 p.m., driven by a love of nature and just the pure excitement of spotting whales.

“Most people that live here don’t have an idea of … how much diverse wildlife there is right from shore if you have the patience to watch for it and know what to look for,” says long-time whale counter Mike Malone. 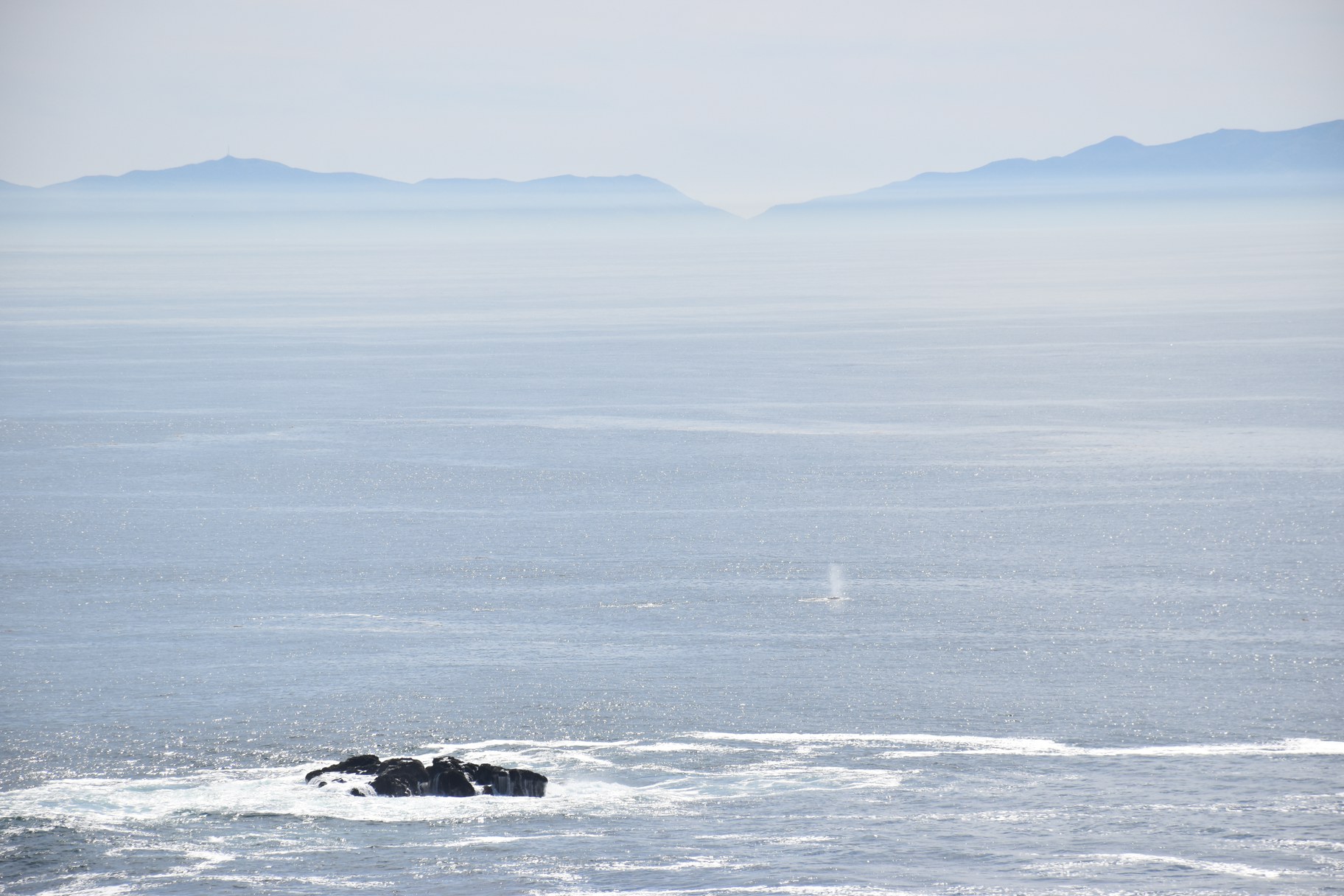 A gray whale spouts just offshore from where volunteers count the whales from the Point Vicente Interpretive Center on the Palos Verdes Peninsula. Sometimes, the whales get so close to shore that the counters can hear them breathe. Photo by Susan Valot.

Another counter says spotting a whale is like finding a jewel.“It’s just a joy to know that there’s more than humans, and that you’re looking at this other sentient being that has this totally different way of being a mammal with mammary glands and with lungs, but in the water,” says volunteer Noelle Pellowski, who drives out each week from north Orange County to take part in this citizen science project.

The count will go on until almost the end of May. The camaraderie, the animals, and the beautiful view keeps the counters coming back. And they hope the gray whales will come back, too.