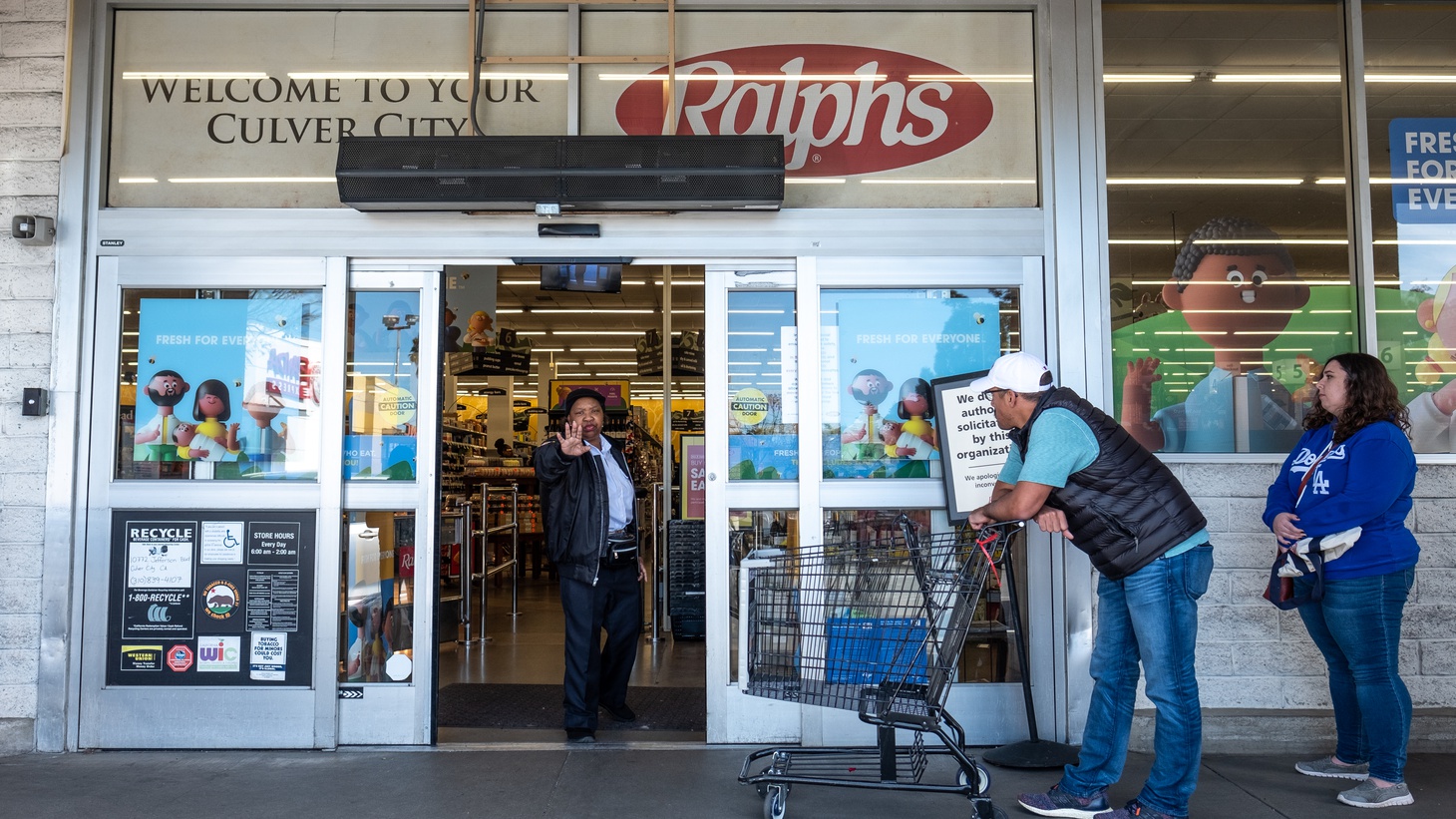 A security officer guards the entrance of Ralphs in Culver City, CA, as shoppers stand outside. Mike Iovino, who works at a Ralphs in Studio City, says grocery store employees deserve to be better protected against the newfound risks that have come with their jobs over the past two years. Photo by Amy Ta.

Over the past two years of the pandemic, grocery stores had to stay open and “essential” workers there couldn’t stay home. But now management teams at some of those stores — like Ralphs, Vons, and Albertsons — and their workers can’t agree on a new labor contract. Over the weekend, the workers’ union voted to authorize a strike. The two sides go back to the negotiating table on Wednesday.

“We’re just trying to get to a livable wage,” says Mike Iovino, who has worked at Ralphs supermarket in Studio City for 15 years. “We’re feeding our families Top Ramen and macaroni and cheese, and we have food insecurities and have to go to food banks.”

The supermarket chains are currently offering workers a $1.80 wage increase over three years. But the union says that’s not enough — they need $5 over three years, which they say won’t even keep up with inflation. Ralphs says the union’s demands would raise food prices for consumers, and make some employees better compensated than other essential workers like EMTs.

While being a first responder in the medical field is different than being a clerk, Mike Iovino says grocery store employees deserve to be better protected against the newfound risks that have come with their jobs. Iovino is not shy about describing what those risks are: “being spit on, having food thrown at us … being worried about going to our cars because we’re asking [customers] to wear a mask for the public’s overall safety. … We became the mask police.”

Grocery store chains have been facing other wage strikes around the country. A nine-day strike at a chain in Denver, also owned by Ralphs’ parent company Kroger, took place in January this year. All this comes after Kroger earned significant profits over the last two years compared to before the pandemic.

“Kroger’s operating profit nearly doubled between 2019 and 2021,” says LA Times California economy and labor reporter Margot Roosevelt. “People were not going out to restaurants, they were cooking much more at home, and so they were flocking to grocery stores.”

With those profits, Kroger bought back stock, paid out investors, and increased executive compensation. The company’s CEO, Rodney MacMullen, was criticized for earning a $22.4 million pay package while the company stopped paying workers a pandemic hazard bonus.

Describing the mood among the employees of Ralphs, the LA Times’ Margot Roosevelt says, “There’s a lot of anger that there hasn’t been before.”