Theodore Payne Foundation, at the eastern edge of the San Fernando Valley, is a nursery that grows and sells all kinds of native Southern California plants, including hummingbird sage, lilac verbena, and deer grass. The foundation teaches people how to find native plants and grow them at their own home. These plants are vital to the health of the local ecosystem, particularly during a time of climate change, hotter weather, and droughts.

Steve Chiotakis visited the nursery and spoke with its executive director, Evan Meyer. 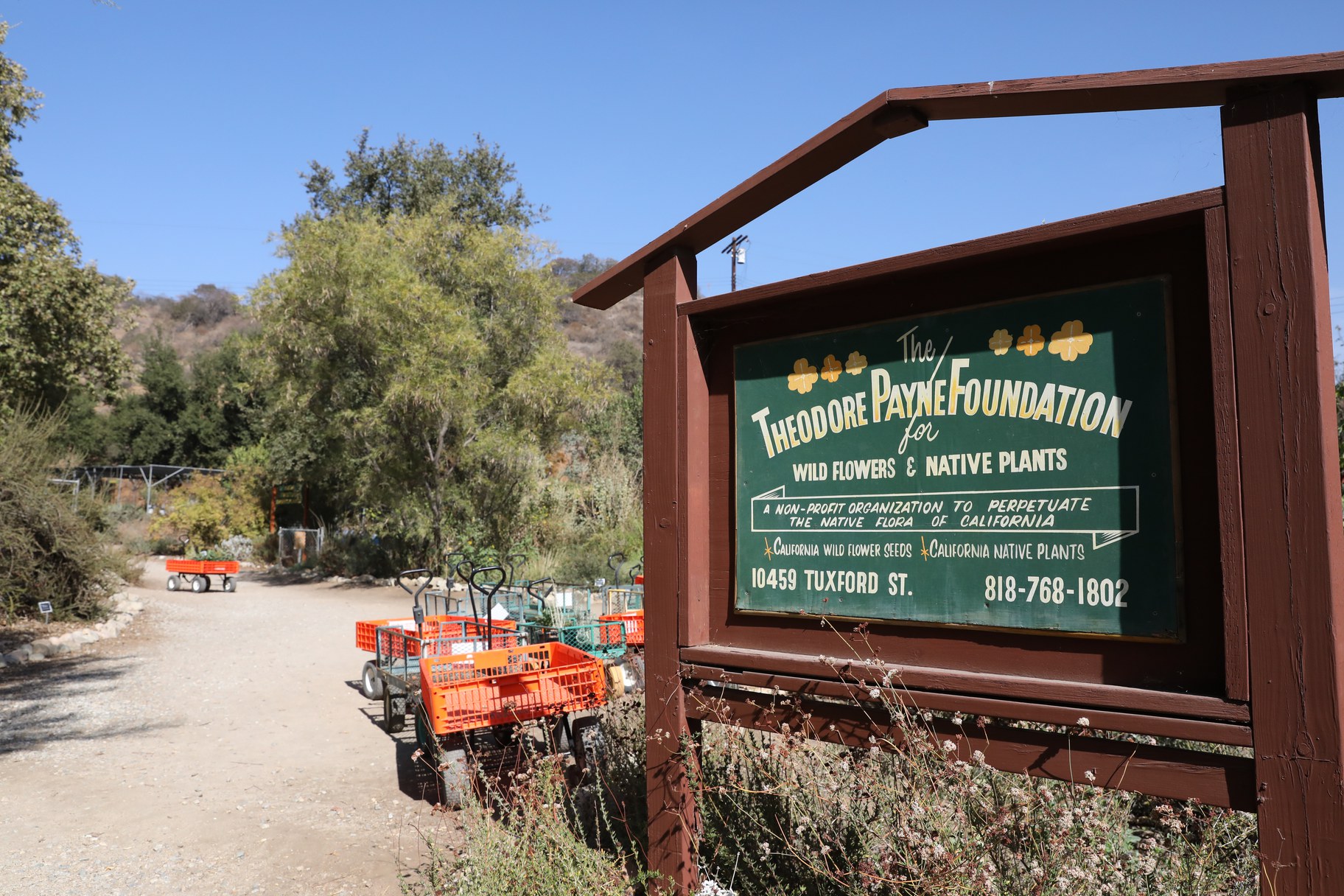 This sign marks the entrance to the Theodore Payne Foundation in Sun Valley, CA. Photo by Zaydee Sanchez. 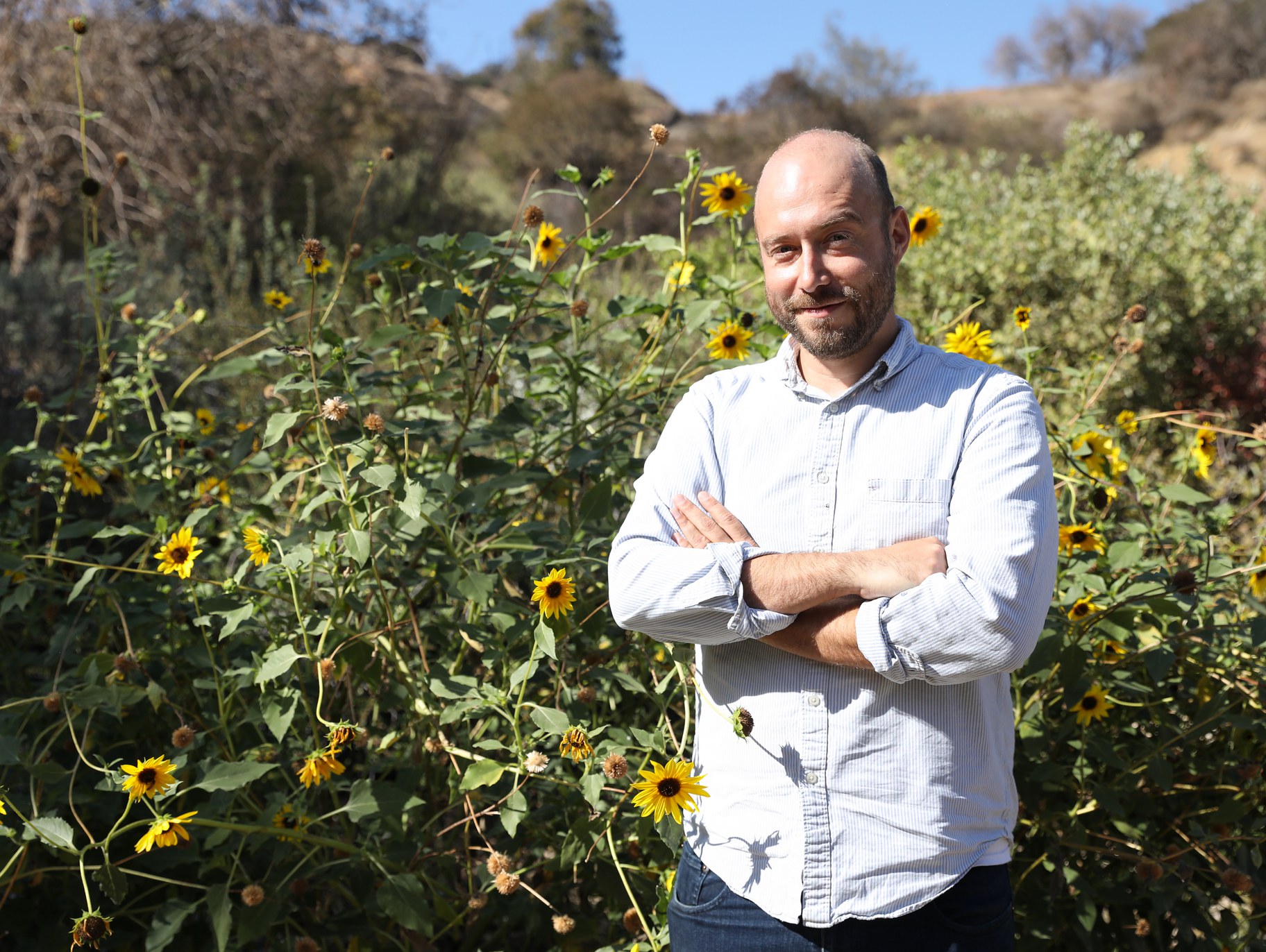 For people who are interested in having plants around them that are local to the area and can survive dramatic climate, now is the time to plant them, right?

Evan Meyer: Right. We are in a Mediterranean climate, which means we have these wet, hopefully, winters. And we have hot dry summers, so there's a seasonal drought. Every year we have a drought in Southern California. Now we're in a drought on top of that, where in the winter we're not getting rain.

So California native plants give you the option of syncing up with the seasons and having your garden work in harmony with the climate. So basically we're trying to lock into the Mediterranean climate, embrace that, find the beauty in that, and through that practice, we can save a whole lot of water and use that for other purposes. 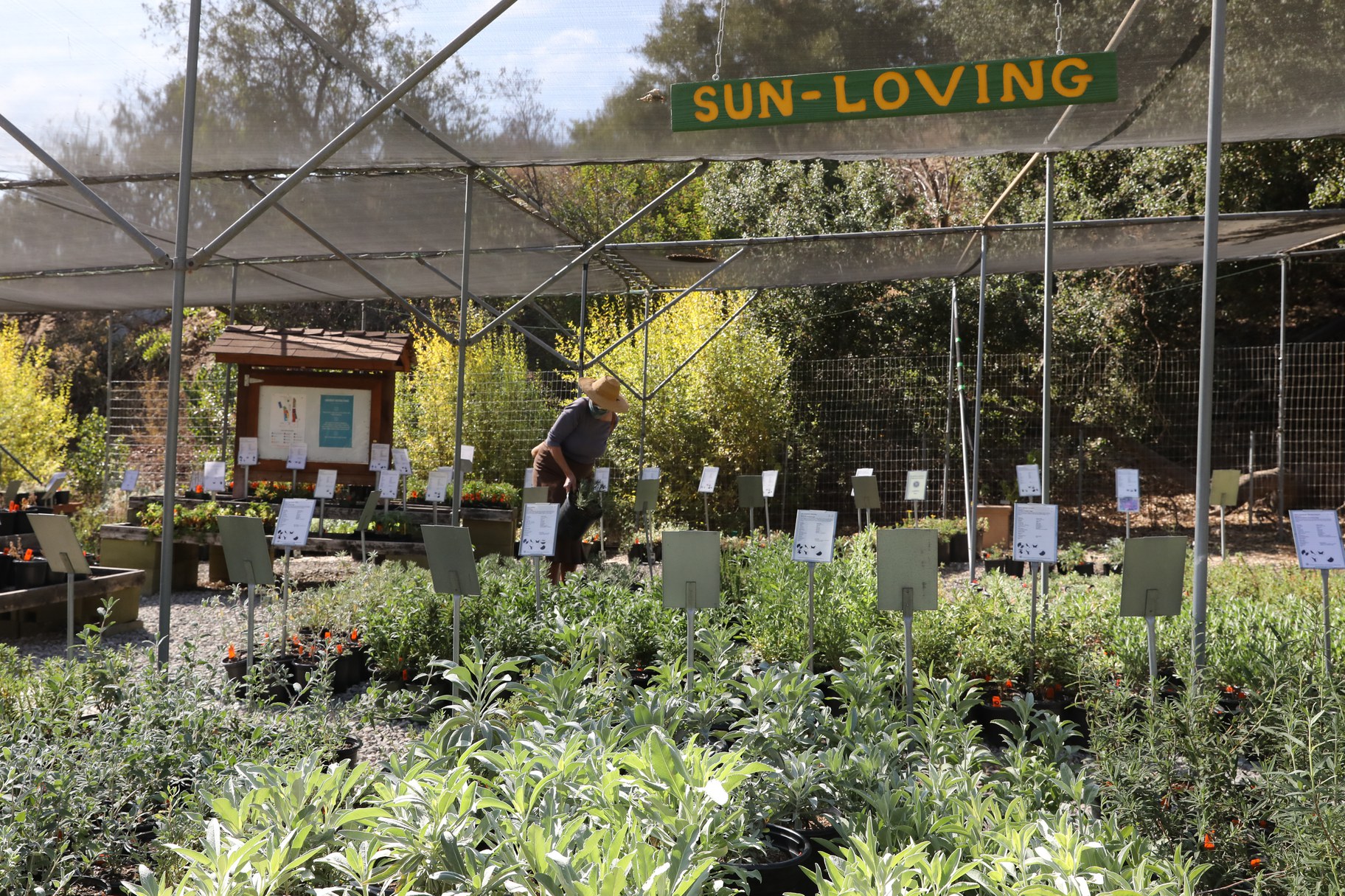 Customers from all parts of Southern California shop around the Theodore Payne Foundation. Photo by Zaydee Sanchez.

Can you create a garden with these kinds of plants and not have to worry about watering them because they're supposed to be here?

That's something that everybody assumes — that native plants means they take no effort to begin with. And we always say the most important thing with native plants is the ‘establishment phase.’ So you want to pick the right time, and right now, in early fall heading … into the winter, that's the ideal establishment time, because what you're allowing the plant to do is grow a deep taproot. And that way, it's going to reach that deep soil, that deep subterranean water. And that way, it can kind of make it through that dry summer. 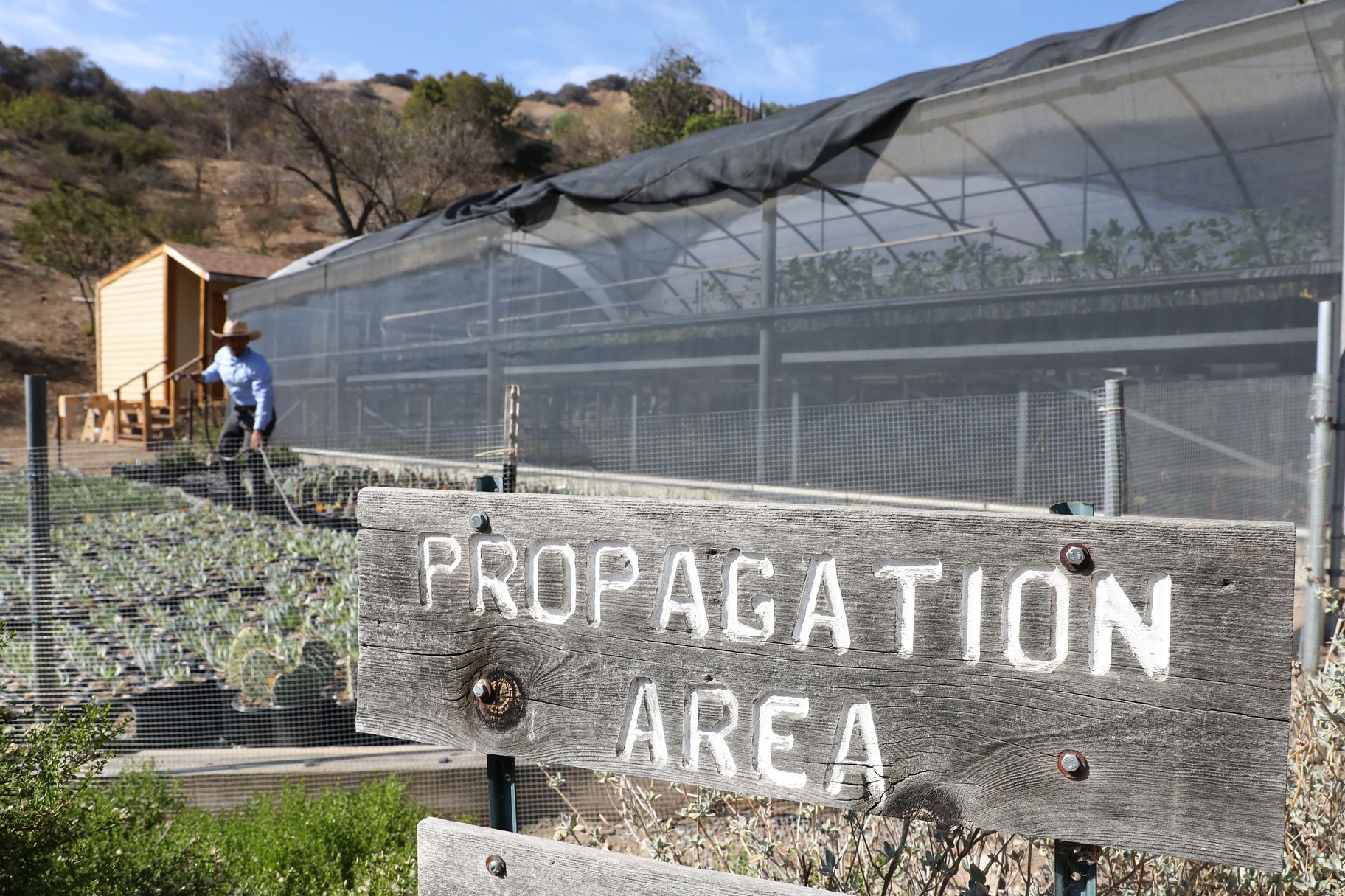 At the Theodore Payne Foundation, an employee waters the Propagation Area. Photo by Zaydee Sanchez.

So you have to dig down deep when you plant?

You plant the plant now. And then it does the work for you. The root digs itself down, it goes down to the water. And one of the things that's nice about these plants is they're adapted for deep, infrequent waterings. So if you think of your typical landscape in Southern California, maybe you have a little bit of lawn, maybe some rose bushes. Those are usually running on a timed sprinkler system that goes a couple times a week.

What California native plants need is actually just a deep watering, maybe every 10 days, two weeks. And if you get that through the first year of those plants, you can almost completely wean them off. And we see lots of people who don't water at all through the summer or just have very limited watering in a dry winter. So with these native plants, you might have to make up for watering during a drought winter. But during the summer, if you've established them well, they're going to take very little water over the course of the summer. 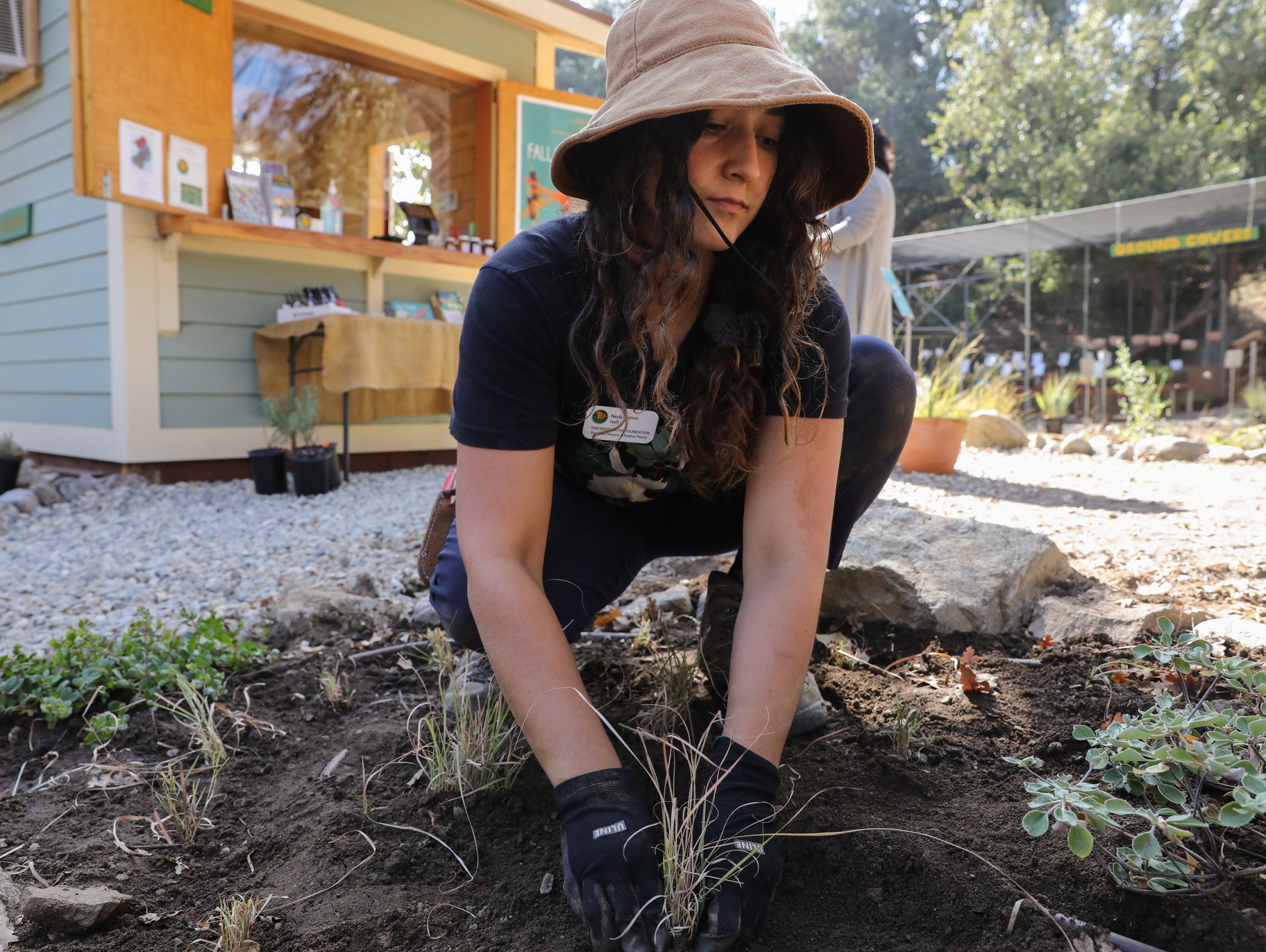 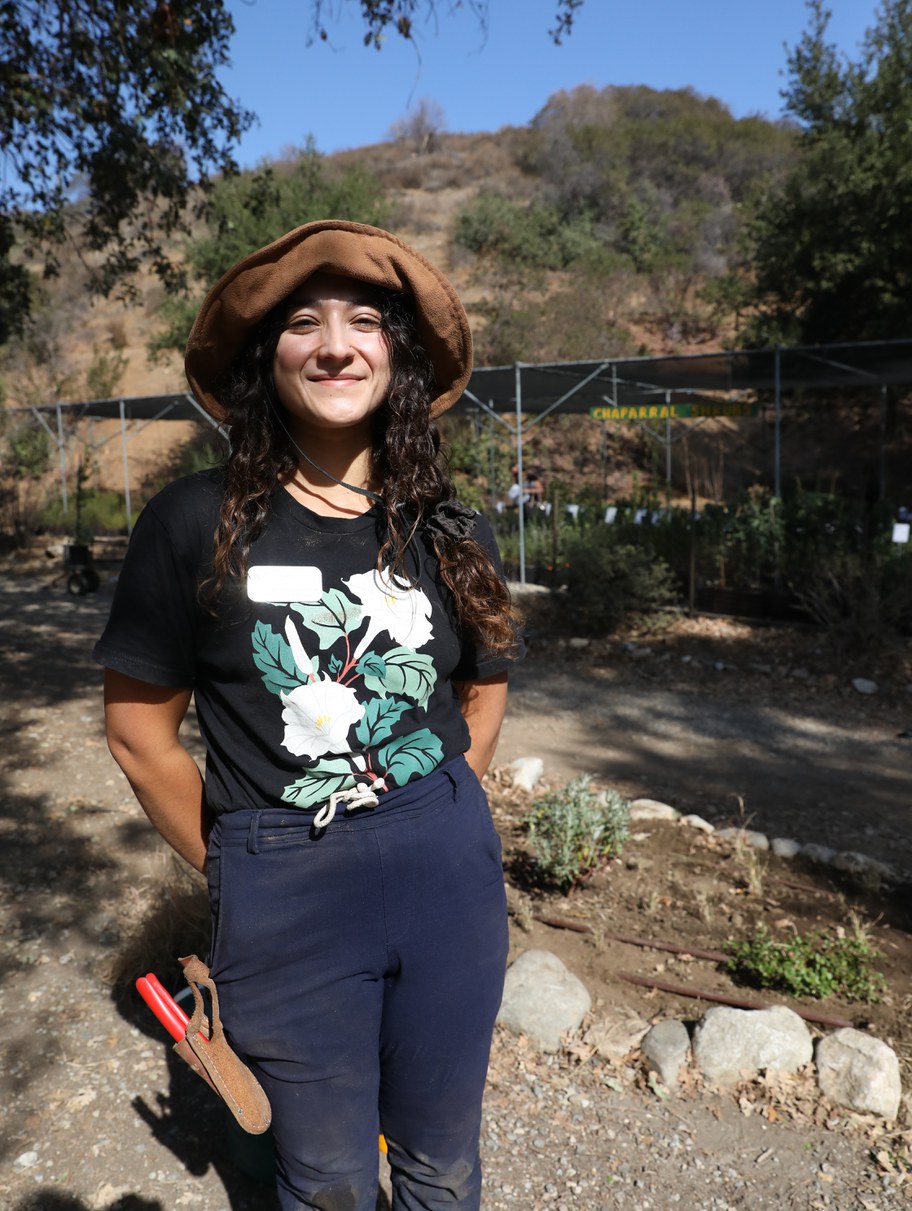 Neda Brehm has been working at the Theodore Payne Foundation since May of this year. She truly enjoys working outdoors with plants. Photo by Zaydee Sanchez.

Home Depot, Lowe's, Armstrong and other nurseries sell a lot more non-native plants. Is that a problem?

We think that native plants give Southern Californians the opportunity to rebuild nature in addition to saving water. And that's the real difference between native plants and your more broad category of drought-tolerant plants — is that the native plants have evolved with the native insects, the native birds, all the other native animal species that live here. So when you choose these plants, you're creating habitat for hummingbirds. You're creating habitat for butterflies. And you're actually restoring a natural system and bringing that back into our urban core. So that's kind of the big difference, and that's why we think that these plants should be much more prevalent.

[Some other local nurseries] are starting to sell more native plants, which we highly encourage, and we're happy to see. And we think there's just an opportunity to shift our conception of the landscape from being something that's purely aesthetic, to something that is aesthetic but also environmentally friendly. And to us, environmentally friendly means both saving our precious natural resources and restoring the habitat of Southern California. 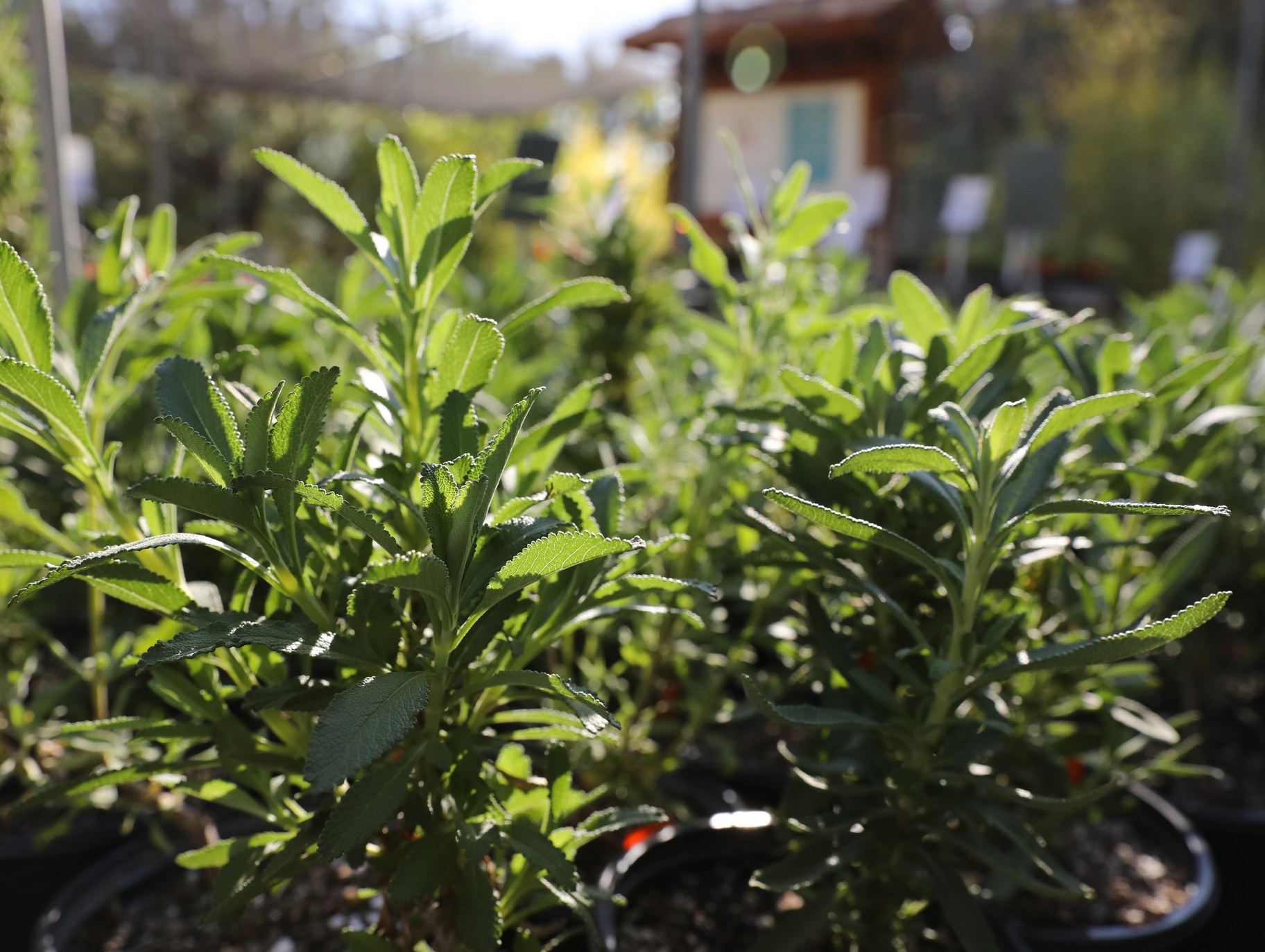 Monarch butterflies have seen a huge population decline. How does planting native plants help the Monarch?

Narrowleaf milkweed … is the host plant for the Monarch caterpillar. So if you want Monarch caterpillars, this is the plant you want. They can't live without this plant. This one is the one that is probably the easiest to grow, the narrowleaf milkweed. There's been a lot of talk recently about which type of milkweed to plant. And so we always recommend the native milkweed because that's the type of milkweed that the Monarchs have evolved with. If you plant the tropical milkweed you'll see for sale, the seasonality is different, so it throws off their migratory cycle. [Monarchs] are a migratory species, they will fly down to Mexico for the winter, and then come back up here in the summer. So if you plant the tropical milkweed, the lifecycle of that plant changes the migratory patterns of the butterfly.

What about the bees?

If you like to eat any fruits, you probably like bees, because all of our fruits come — and many, many of our vegetables, which are botanically fruits — come from bee pollination. So without bees, we don't have strawberries, we don't have blueberries, we don't have many of the foods that we eat every day. Native plants are exceptional at providing nectar for bees. So that's one of the big reasons to plant them. And they don't only support the European honeybee, which is the common bee that people think of. They support the many, many species of native bee.

So the bees are a very diverse group of organisms. There are hundreds of different species of bees native to California. And some of them live in the ground. Some of them live in holes in wood. They all are united by the fact that the best habitat that you can create for them is through California native plant landscape.

Bees are united by serving the queen.

There's a lot of solitary bees. The native bees, many of them are solitary, which means they live on their own. … So they're kind of like ‘The Bachelor,’ ‘The Bachelorette.’

Exactly, yeah. And we are full of plants cause of the time of year we’re in. Our big fall planting sale starts on Tuesday. We're really excited. And if you look, all of our plants have these placards, which are going to tell you exactly … how big is it going to be? What type of sun exposure does it like? Full sun? Does it like shade? How much water does it need? What kind of soil is it going to thrive in? 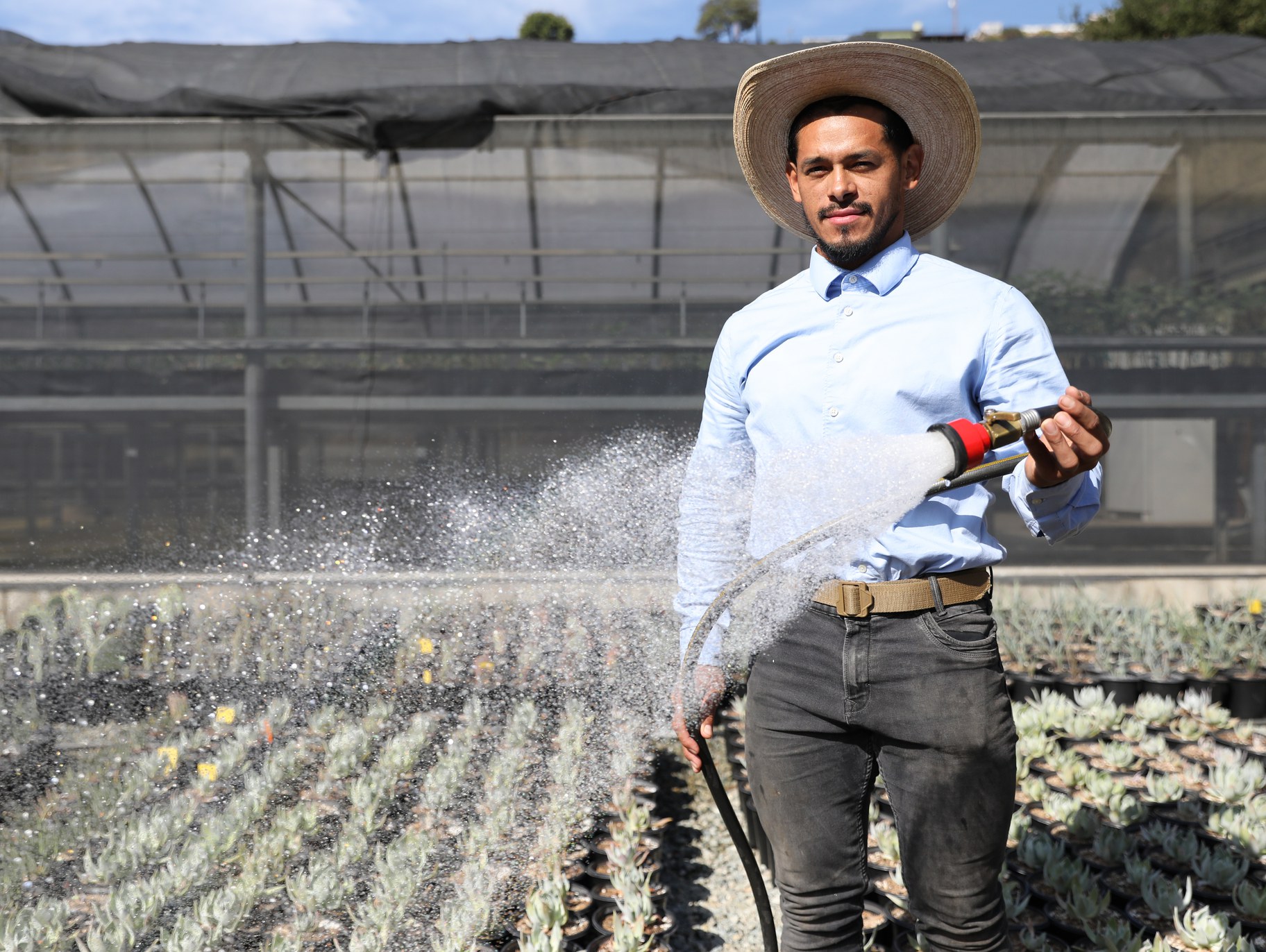 Hector Armando Garcia has been working at the Theodore Payne Foundation for over six years. He comes from a family of farmers. He says working here has changed his course in life for the best. Photo by Zaydee Sanchez.

On this card for Dana Point California Buckwheat, there's a graphic for a butterfly, a deer, and a mountain. And it says “clay.” 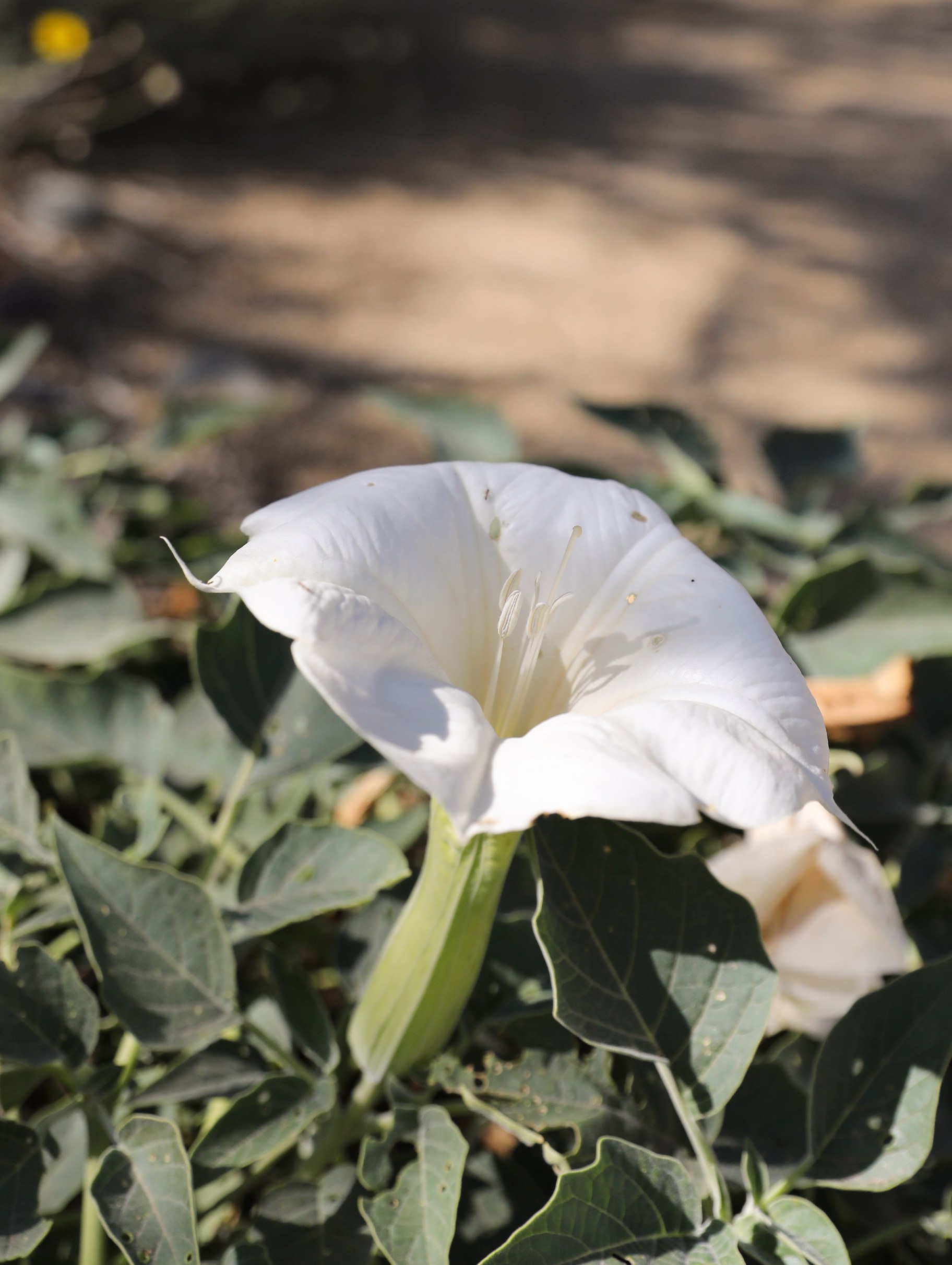 The white flower, Sacred Datura, is part of the Nightshade family, which is poisonous to humans. Photo by Zaydee Sanchez.

This is called Sacred Datura, and it's in the Nightshade family, which is the same family as tomatoes, eggplants, and the night shade. This is such an interesting plant. It's actually a hallucinogenic plant. … It’s also highly toxic. … But you can see, like, look how big that flower is! This is a plant that will take zero water. And it's pollinated by moths, which is kind of cool.

… And one of the things you're gonna see on this plant is little bite holes in the flower. And in traditional horticulture, that would be something that would be a no-no because you want it to look kind of perfect and almost plastic.

The style of horticulture that we advocate for is creating an ecosystem. So I see a little insect on here, and these holes in the flower are actually sort of a sign that what you're doing is working. You're creating habitat with your garden. So it's sort of a reframing of how you define beauty within your garden that we're going for in many cases.

For folks who want to plant something that is drought-tolerant and native to Southern California, how do they start?

One really nice thing from a monetary perspective is getting a rebate from the water companies. So there's turf removal rebates, and you can get actually paid by these water companies to remove your grass and put in a native plant garden.

… You can apply to the Metropolitan Water District and the Los Angeles Department of Water and Power. Both offer rebates. So that can often pay for the whole conversion in itself with the savings you'll get on your water bill. And then of course, you'll be saving water every month. If you're watering a lawn, it's much less. It's about, on average, 25% of the water going into native plant landscape.

But in terms of how do you get started? Well, there are two main roads. There's the people who really want to roll their sleeves up and get into it on their own, and get their hands dirty, get some dirt under their fingernails. Those folks typically will start by visiting us at Theodore Payne Foundation, visiting some of the other great native plant nurseries around the city, buying a book, and really importantly, I would say, is taking at least an introductory class. So we offer classes here at the foundation, everything from basics to maintaining native plants, to designing your home garden. So there's a lot of good tools for the people who want to kind of go about it on their own.

For those who kind of want a little less hands-on approach, you can hire professionals to help you create a native plant garden, like landscape architects and designers. And there's a whole growing community of people who specialize in drought-tolerant and native plant landscapes. And we actually offer a list of professionals that we've kind of curated. So come ask us, and we're happy to share that list.

How to rebuild nature, conserve water, and create habitats for animals? Invest in native plants

Native plants are vital to the health of the local ecosystem, particularly during a time of climate change, hotter weather, and droughts. KCRW tours the Theodore Payne...

There are 18 endangered butterfly and moth species that the San Diego Zoo Wildlife Alliance works to protect.

Santa Ana will become the first city in Orange County to have rent control.