That wind-driven fire burned 12,466 acres, spitting embers into neighborhoods. Two firefighters remain hospitalized. And the land is a scorched checkerboard with some areas black and barren, and others with signs of life. Oak trees are singed. Cacti are melted on one side and sometimes green on another.

O’Connell stooped down to look at some plants. “Look at this. These are green and didn’t get burned. And then five feet away, it was almost a complete burn.” Crews and volunteers with the Irvine Ranch Conservancy, which oversees this public land, had spent the last five years restoring this canyon within Limestone Canyon Regional Park back to its native state, with lush vegetation around the creek.

This watershed is fairly dry this time of year, but it is the headwaters of San Diego Creek, which empties into Upper Newport Bay, said O’Connell.

The conservancy had just finished restoring it when the Silverado Fire hit, burning in much of the same footprint as the destructive Santiago Fire did in 2007. That earlier fire churned through 28,445 acres, destroying 16 homes. It burned hot, leaving a barren moonscape behind. The Silverado Fire has some areas like that, but others still have green signs of life.

“The fire came through relatively quickly,” O’Connell said. “And so it left some refugia of unburned habitat, which is really important long term because it’s a refuge for wildlife, and it’s also a refuge for plants that might have been burned in some other areas.”

Despite the scorched land there are signs of life everywhere: a couple of native red ants crawling on the road, fresh dirt churned up by a gopher, even bobcat and coyote prints. In the air, hawks and vultures swirl in circles, catching wind currents, drifting gently like dandelion puffs on a summer day. 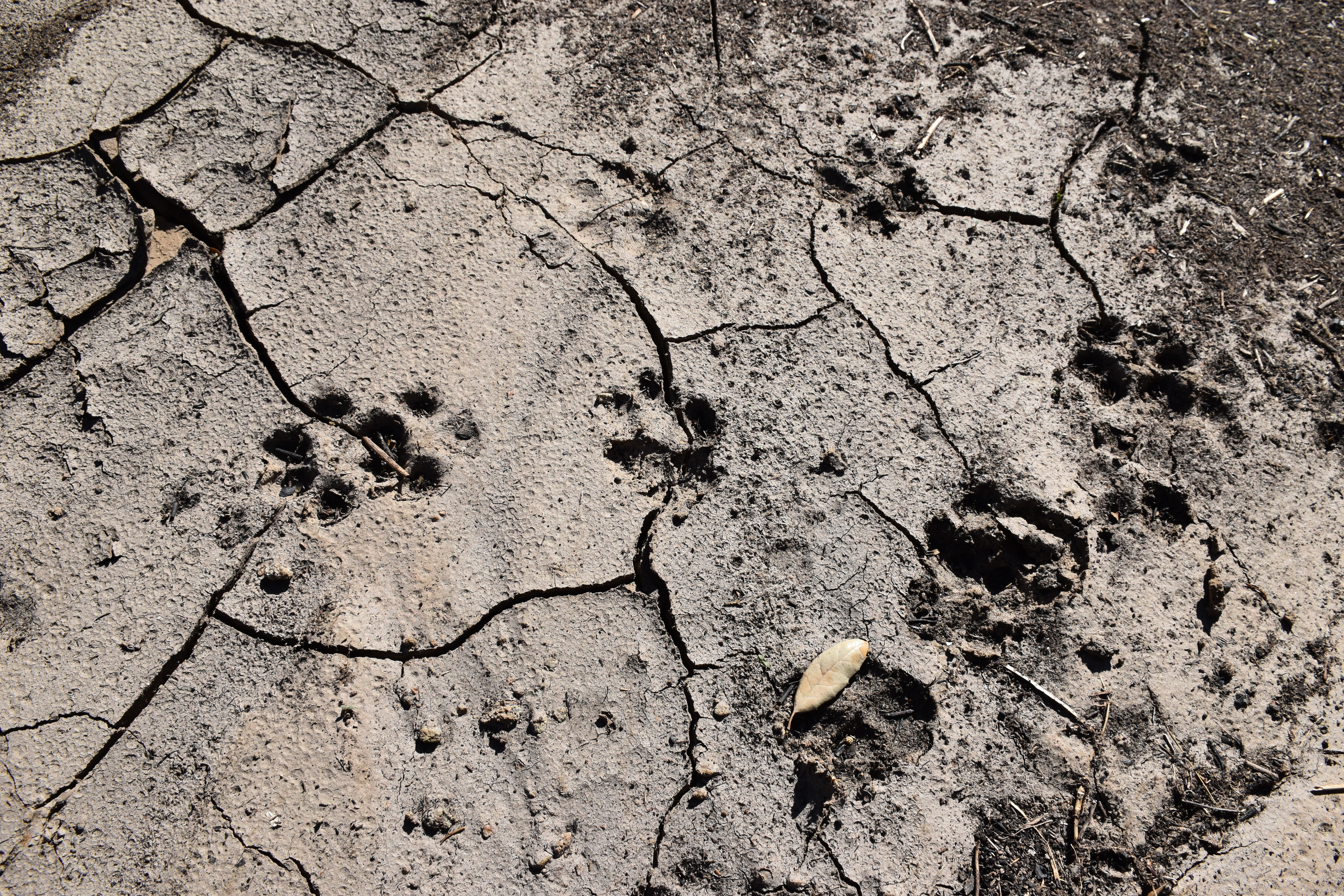 Despite the Silverado Fire in October, there are signs of life in Agua Chinon Canyon, including these coyote and bobcat prints in the soil. Photo by Susan Valot.

O’Connell said the biggest problem isn’t that a fire took out their restoration area.

“These systems are essentially evolved with fire. Our biggest problem is that they evolved with fire that comes back about every 50 to 150 years,” O’Connell said. “This is the third time that these lands have burned in the last 23 years. That is 90% too often. And so what happens is they don’t come back as well the more you burn them over and over and over again.”

These oaks are nesting sites for hawks and other native birds, the same ones soaring over the canyon.

O’Connell said they will spend the next three to five years monitoring the area to see which native plants rebound and which might need help. They are also using trail cameras to help track wildlife in the area. Some of those cameras may have even captured the fire coming through. They are still gathering the data.

But before they could do anything, a second fire, the Bond Fire, burned near the same area again this month. It made it to near the top of the canyon, but luckily, did not burn through again. 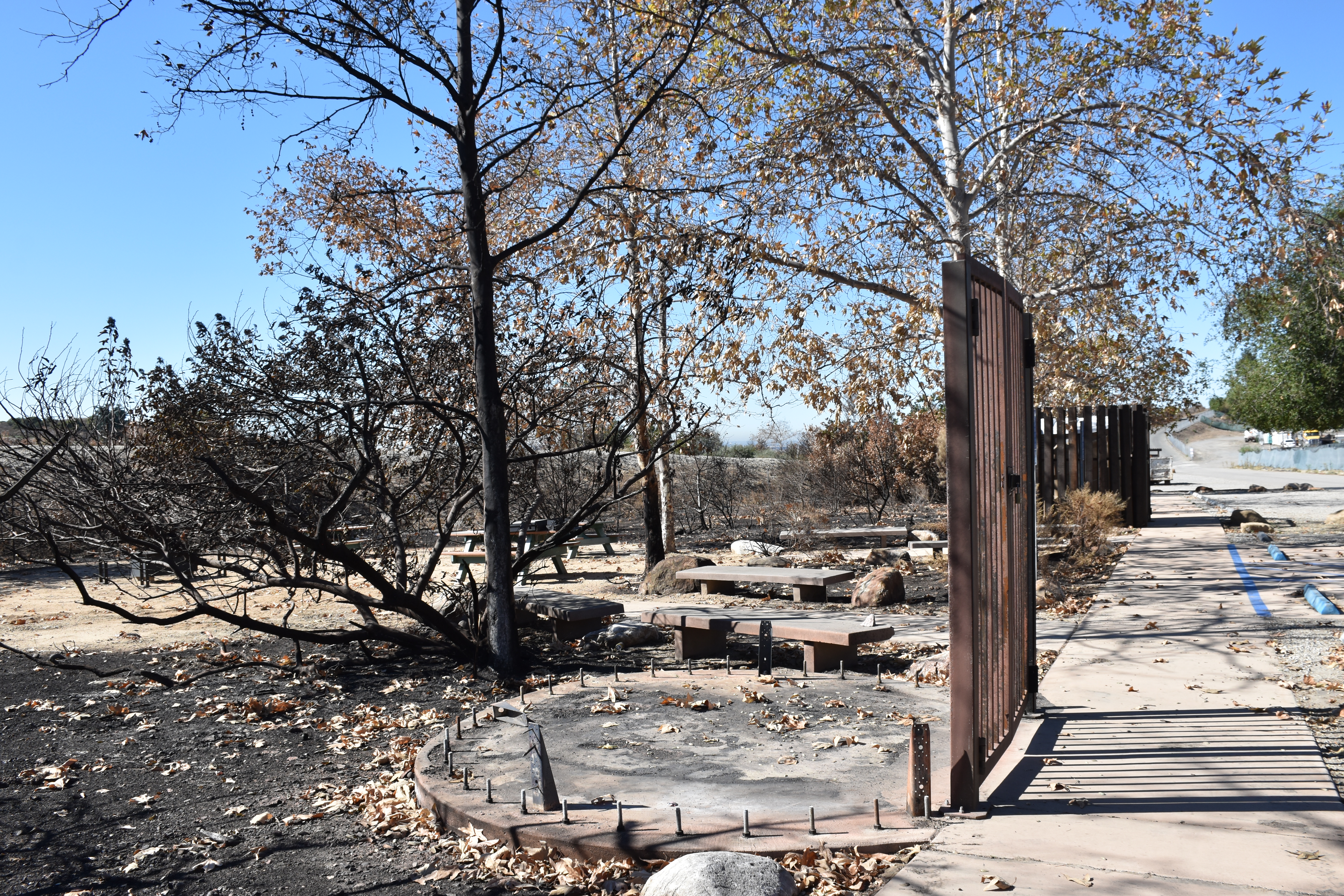 The Silverado Fire destroyed one of the outhouses at the Portola Staging Area, leaving the other right next to it untouched. The fire burned so hot that there is no sign out of the outhouse, which still has a locked gate. Photo by Susan Valot.

Still, instead of viewing the destruction of newly restored canyon land along a creek from the Silverado Fire as a failure, O’Connell said there is a silver lining.

“It’s obviously disappointing to see how burned it is, but at the same time, part of restoring the habitat means taking out the invasive species before you restore the natives,” O’Connell said. “And if we did a good job of that, it’s unlikely that there are a lot of invasive weeds in there to come back and that it will come back as native plants. We’ve seen that in other areas like some of the restorations after the Woolsey Fire in the Santa Monica Mountains. They’ve actually come back pretty healthy. So we look at this as a big opportunity to study further our restoration methods and see if they are resilient over time.”

Except the seed farm did not escape the Silverado Fire either. Embers caught the seed farm on fire, too, burning plants and several buildings. They lost some of their buckwheat crop, along with their white sage crop.

“By coincidence, the fire occurred on a Monday. The Thursday before, we had taken all of this year’s harvest out of the seed processing facility and put it into the storage facility. So we saved almost this entire year’s harvest.”

They will have to rebuild a few lost buildings, but O’Connell is still hopeful. As he walked back up the canyon to return to his car, he pointed to a cactus that looked like it melted in the fire.

“As soon as we get a couple of nice, light rains this spring, you’re going to start to see sprouts coming back up from the cactus,” O’Connell said. “And as long as they don’t burn again too quickly, you’ll have a nice cactus patch in a few years.”

This part of Limestone Canyon Regional Park remains closed to the public because of the fire, but O’Connell hopes that in the near future, it will reopen with a renewed native habitat that’s more fire resilient. 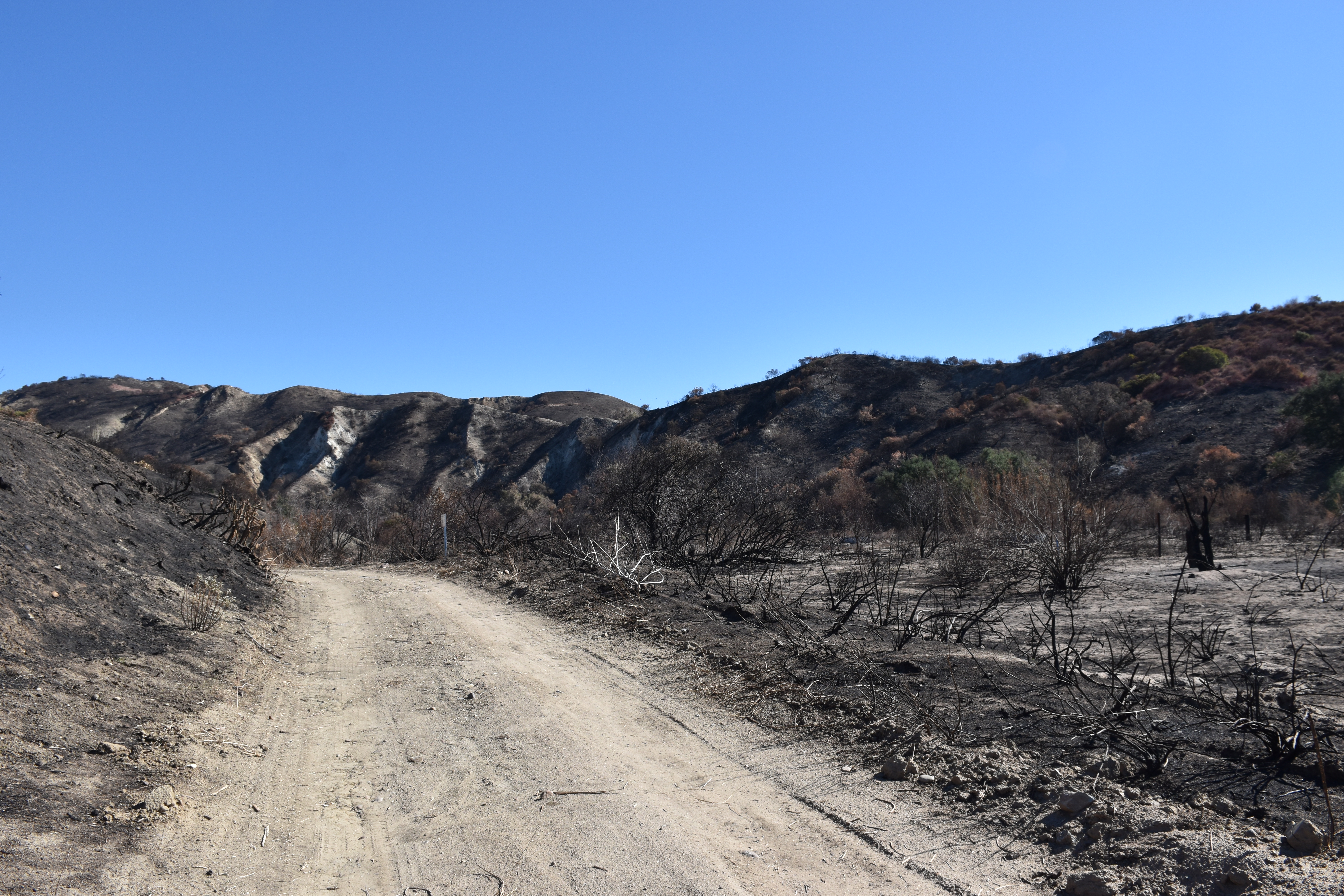 Agua Chinon Canyon, which is right off the 241 Toll Road, remains closed because of damage from October’s Silverado Fire. Photo by Susan Valot.

KCRW looks at how much LA taxpayers are funding low-income housing, and whether that money is being put to good use. The latest idea: tiny homes. They’re eight by eight foot...

To offset COVID outbreak in OC jails, judge orders sheriff to cut inmate population by half

A new coronavirus surge has found its way to the jail population in Orange County. An OC judge is ordering Sheriff Don Barnes to transfer half of all inmates out of group...