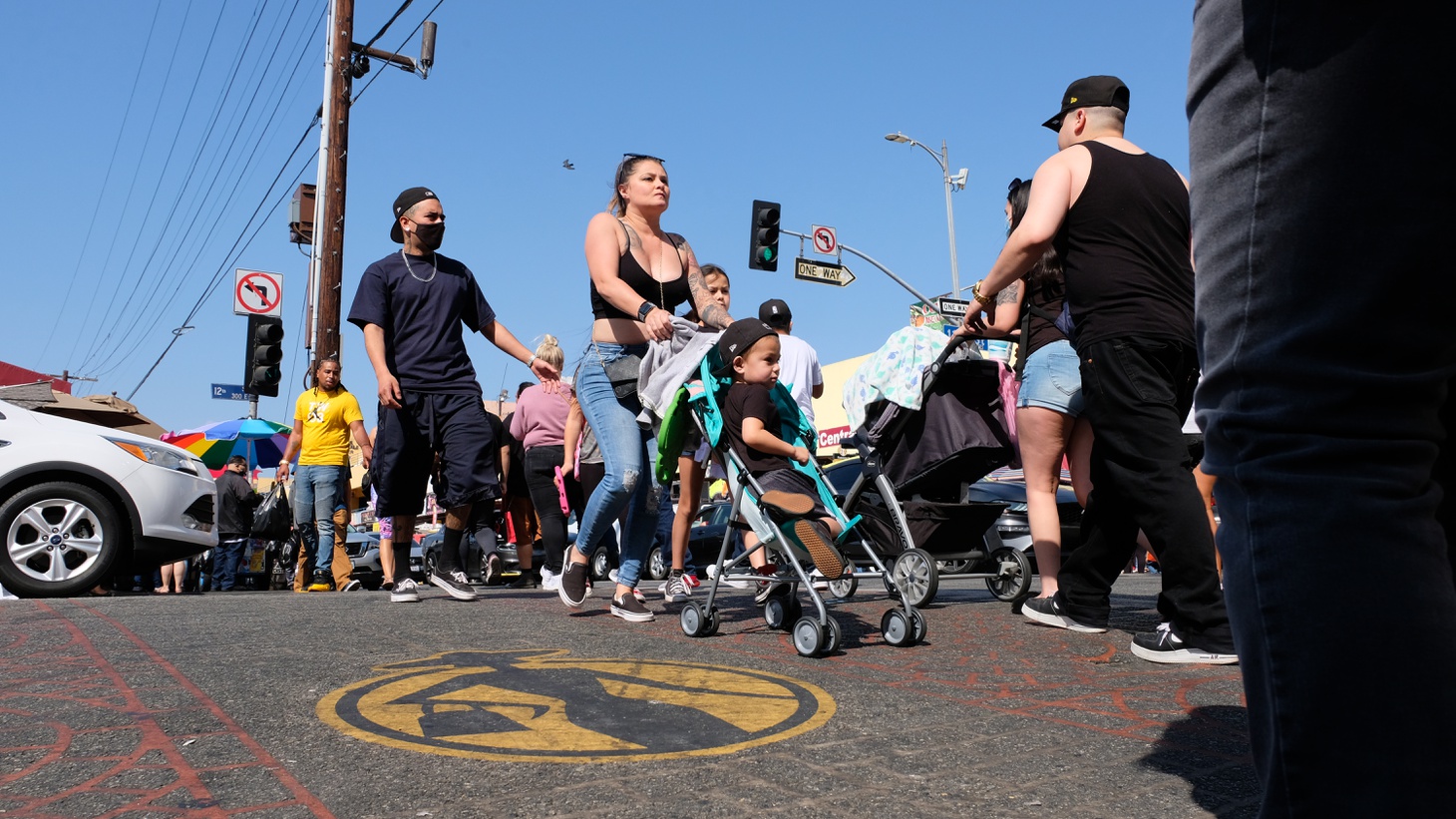 Pedestrians and cars navigate around each other on a crowded street in downtown Los Angeles. Photo by Saul Gonzalez.

The worst day of Koi Finley’s life was January 16, 2021. It was the day she learned her father, Branden Finley, had just been struck and killed by a hit-and-run driver in downtown LA while enjoying his regular weekend bicycle ride around town. Finley was 46.

“That’s the craziest thing that anyone can tell you, that ‘your father was literally hit by somebody … somebody killed your dad,’’’ says Koi Finley.

More than a year after her father’s death, Finley, 19, is still grappling with the senselessness of how her dad died and the understanding that his death was just part of a larger tragedy playing out on LA’s streets. 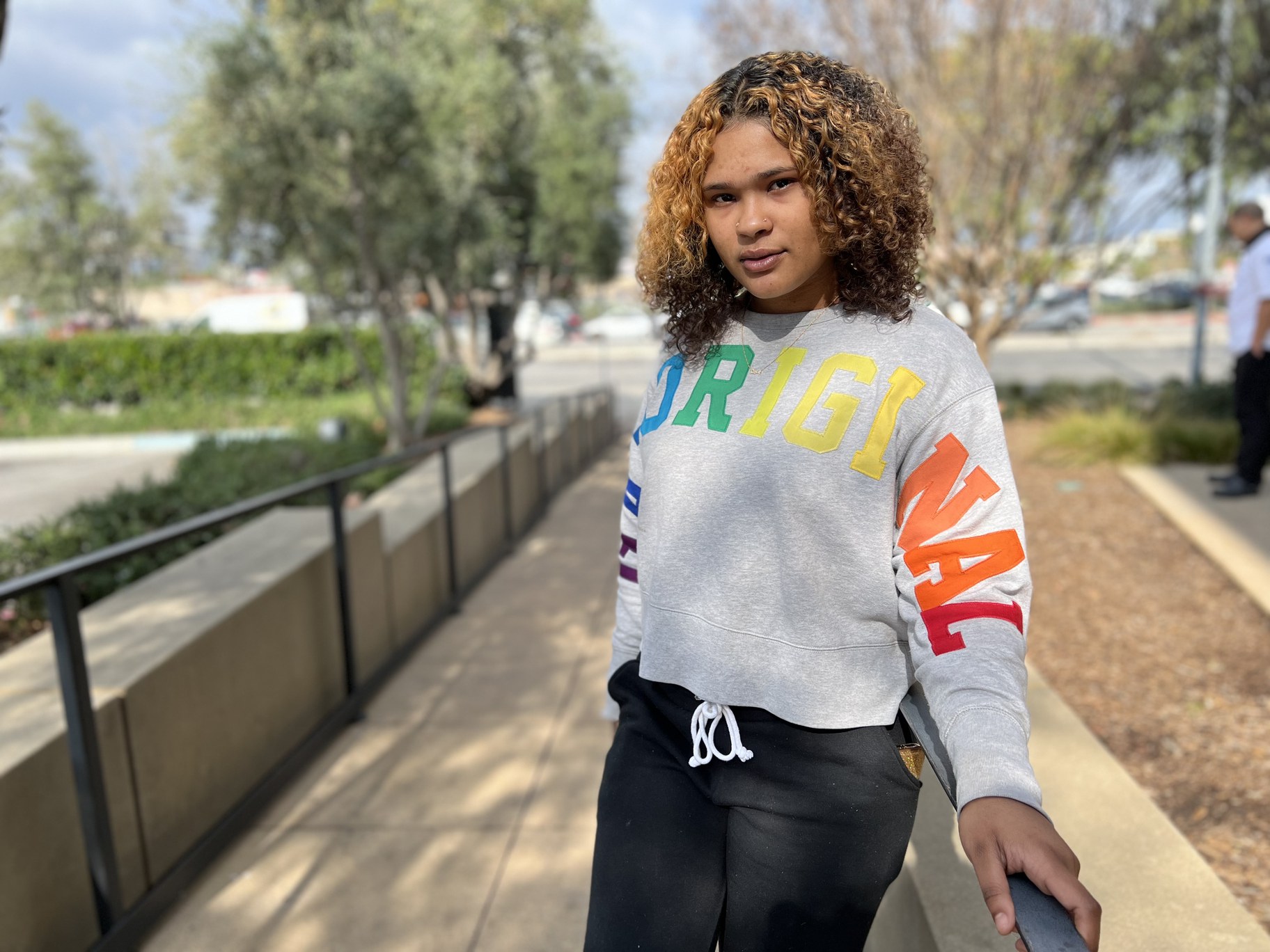 Koi Finley, 19, lost her father last year when he was killed in a hit-and-run accident in LA. Photo by Saul Gonzalez.

Branden Finley was one of 294 people killed in traffic-related incidents on the streets of Los Angeles in 2021, a 20% increase over the previous year. Pedestrians accounted for 132 of the deaths, a 6% increase.

“Every single one of those numbers is a tragedy,” says LA Department of Transportation General Manager Seleta Reynolds. “If we cannot get people from A to B and guarantee that they are safe, and that when somebody leaves in the morning, they'll come home safely at night, then we haven't fulfilled sort of a basic responsibility.”

It’s Reynolds’ responsibility to reduce traffic deaths and injuries in LA, and her most important tool to do that is a program called Vision Zero.

Inspired by traffic safety initiatives in Europe, and adopted by the City of LA in 2015, Vision Zero’s goal is eliminating all traffic-related fatalities in Los Angeles by the year 2025.

To do that, LA is focused on improving what are called “high-injury network streets.” Those are the 6% of all LA streets that account for 70% of pedestrian deaths and injuries. Most are concentrated in the San Fernando Valley and South LA.

What do these streets have in common? They’re flat and wide, with relatively few traffic lights and crosswalks. Put that all together and motorists are enticed to speed.

Reynolds says speed is the number one determinant of the severity of a car crash and whether a person survives a collision or not.

Through Vision Zero, the city is trying to make its riskiest streets safer by removing lanes of traffic, widening bike lanes, and installing more and better crosswalks that alert drivers to pedestrians with big signs and flashing beacons.

One showplace for Vision Zero changes is a stretch of Adams Boulevard, south of the 10 freeway. Like so many other dangerous streets, it runs through historically Black and Latino neighborhoods.

“Motorists have used this roadway, this corridor, almost as a speedway,” says Yolanda Davis-Overstreet, a vice-president of the West Adams Neighborhood Council and a traffic safety advocate.

Davis-Overstreet believes pedestrian safety is a racial and social justice issue because so many of LA’s most dangerous streets run through communities of color and many victims of traffic deaths are Black and Latino.

She sees the changes along Adams Boulevard, like the removal of a lane of traffic in each direction and the placement of enhanced crosswalks with big overhead lights, are a step in the right direction.

“It’s a behavioral change, where we have to slow it down,” says Davis-Overstreet as she surveys traffic along the boulevard. 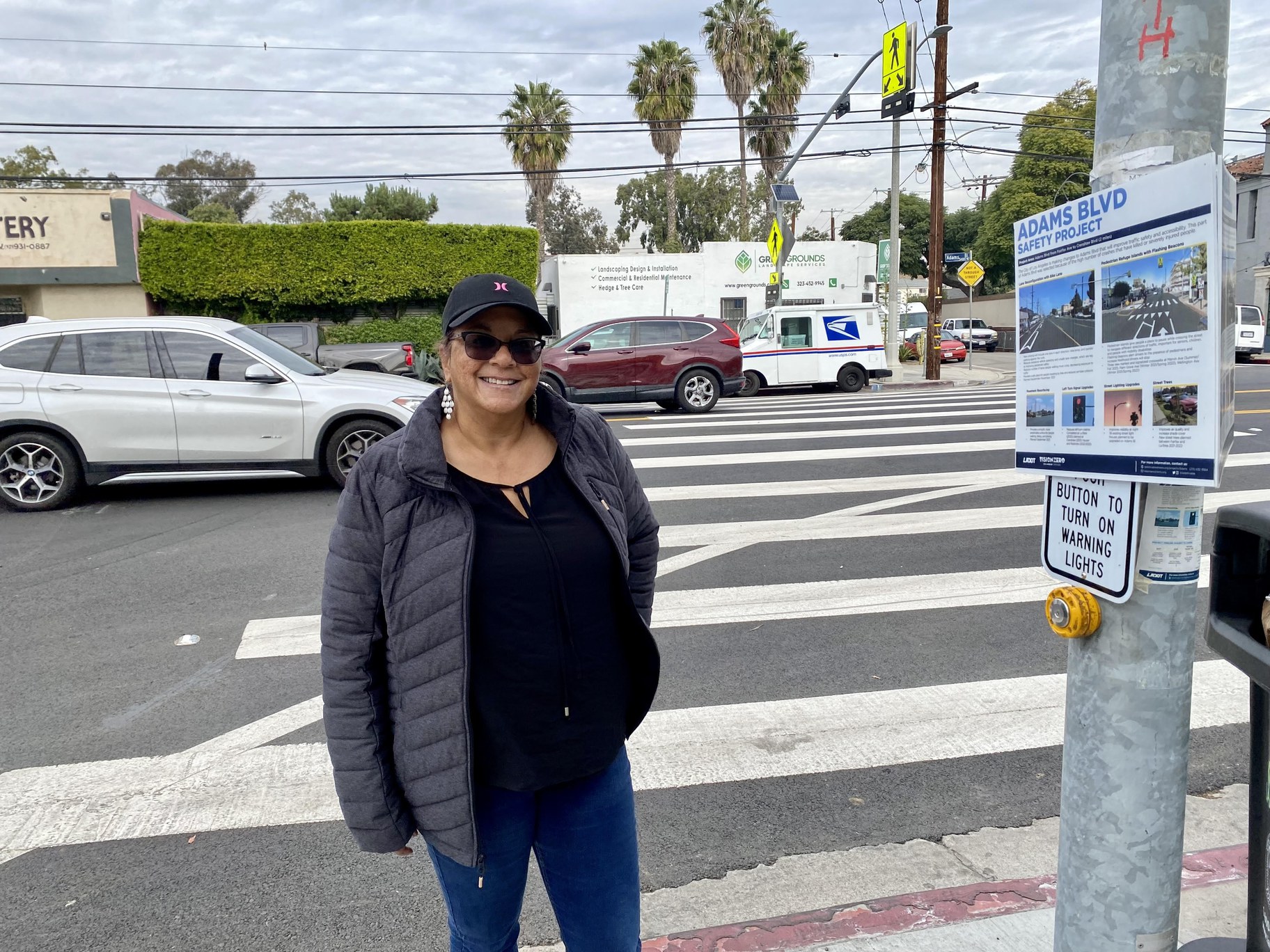 But as LA traffic deaths and injuries have increased nearly every year since 2015 when Vision Zero was introduced, critics, both inside and outside of government, say the city isn’t moving nearly fast enough.

Some critics say it’s because not enough money is being spent on Vision Zero projects, others cite a lack of institutional focus by the city.

But Seleta Reyolds of LA’s Department of Transportation says Vision Zero is only part of the solution to reducing traffic deaths.

She points to things beyond traffic planners’ control, like America’s continuing love affair with big, heavy vehicles that make it harder for pedestrians and cyclists to survive collisions.

Then there’s the challenge of distracted driving and the development of increasingly sophisticated car infotainment systems that keep motorists' attention focused on screens instead of the streets.

“About 80% of people driving are … actively using technology. … We also know that the majority of crashes happen when people driving take their eyes off the road for more than two seconds,” says Reynolds.

Of course, these challenges existed when LA launched Vision Zero seven years ago. Although Reynolds acknowledges the city probably won’t meet the program’s goal of eliminating traffic deaths by 2025, she says setting a goal with Vision Zero is still worth it.

“We’ve set a milestone. We’ve set a year. And if we don’t get there, then I hope it will invite a lot of accountability and dialogue and discussion,” says Reynolds.

But continued talk about how to get to the Vision Zero goal, if it’s ever reached at all, offers no comfort to Koi Finley. She’s still deeply grieving her father’s hit-and-run death and worries about more fatalities to come as traffic deaths remain high.

“The city has said they want to make changes and fix things, but I feel like it hasn’t been a huge priority,” Finely says. “Something needs to be done. Something has to come from all of this, all of this heart ache, all of this struggle.”