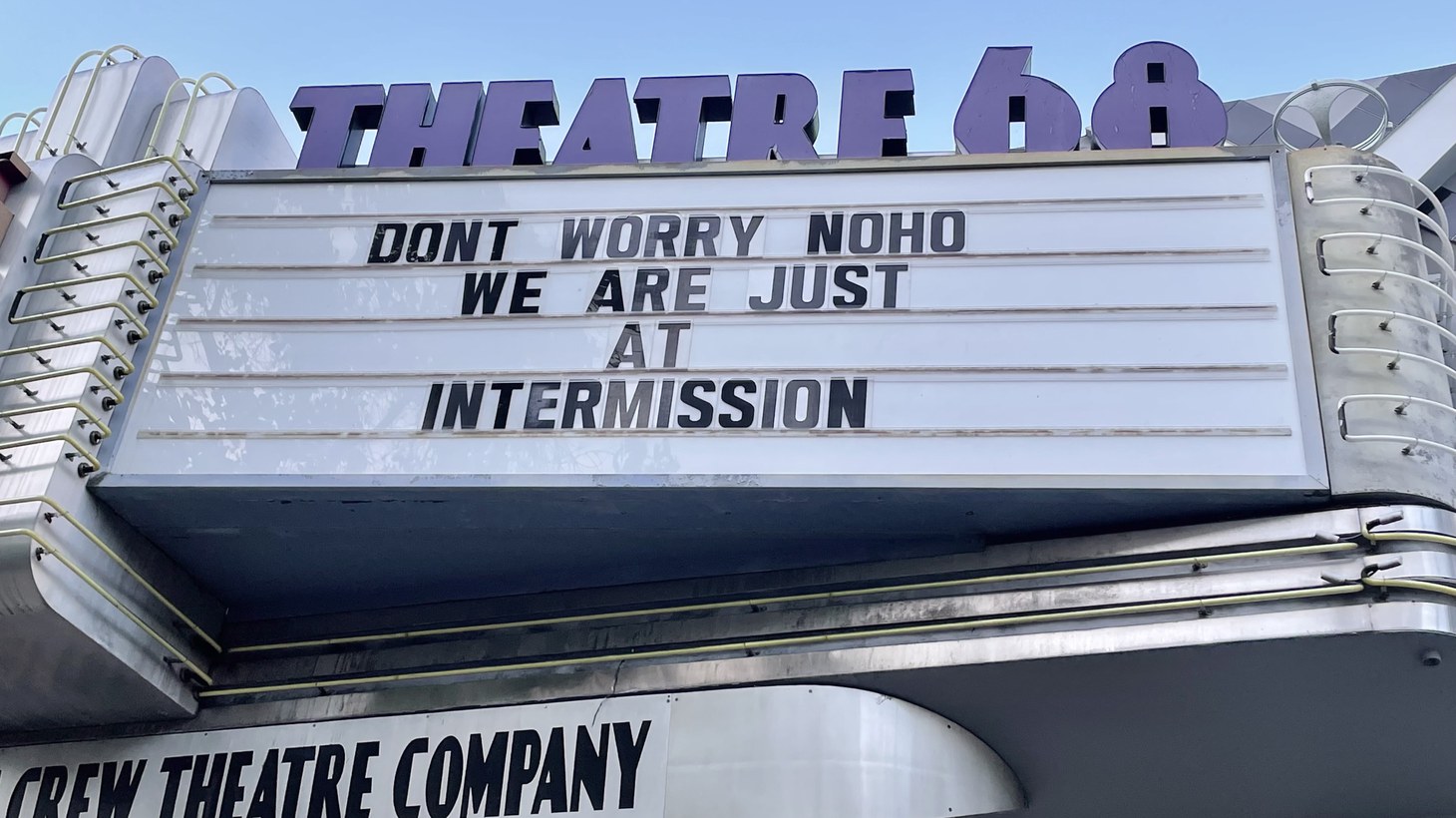 Small theater venues like Theater 68 in the North Hollywood Arts District were hit hard by the pandemic shutdown. Many venues remain closed. Photo by Megan Jamerson/KCRW.

During the pandemic, things came full circle for Ronnie Marmo. When he started his theater company in the North Hollywood Arts District in 2001, he had 68 cents in his bank account, so he named the company Theatre 68.

Over two decades, his company put on around 90 productions, including a few world premieres. Then, during the pandemic shutdown, the theater went dark. Soon, he was out of money again. He had to give up his theater lease. “I just thought it was over, and that was it,” says Marmo. “I kind of made peace with that.”

The pandemic was devastating to the performing arts, including venues with 99 or fewer seats. North Hollywood had the highest concentration of these small theaters in Los Angeles before the pandemic, says Nancy Bianconi, founder of NoHo Communications group, which promotes the NoHo Arts District.

But half of the district’s 22 theaters didn’t reopen after the shutdown. The local theater scene here might never be the same, because these closures mean fewer opportunities for actors and writers to practice their craft and build community.

“People got used to a different way of life,” Bianconi says of audiences’ slow return to in-person performances. Some of the area’s theaters are still seeing ticket sales at 35% of venue capacity, which she says means some of the surviving venues still have an uncertain future. 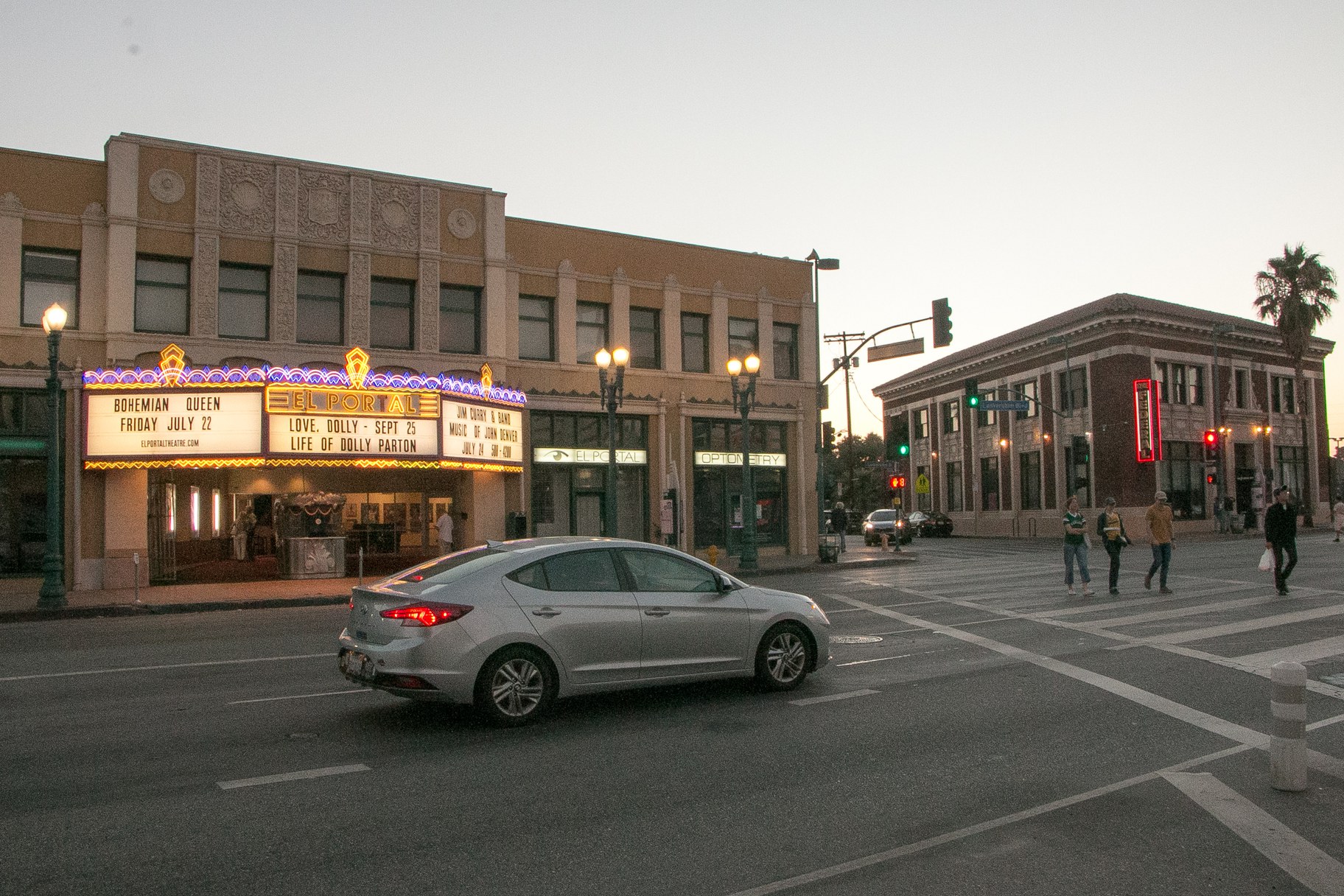 The El Portal Theater on Lankershim Boulevard was built in 1926. The venue was able to survive the pandemic shutdown by renting out the space for film shoots. Photo by Megan Jamerson/KCRW.

Business owners in the North Hollywood Chamber of Commerce formed the district with the support of the Los Angeles Department of Cultural Affairs in 1992. Pre-pandemic, the NoHo Arts District was known for being a buzzy area in the Valley. In addition to theaters, there are restaurants, bars, live music venues, and acting schools.

It was the kind of place where, on a Friday night, you could go for a walk down Lankershim Boulevard or Magnolia Avenue and feel a certain excitement. “It was a vibrant life force happening, where people were very face to face, very excited,” says Christian Telesmar. “The theater was cool. The visual art was awesome. There were just so many things happening in that area.”

Telesmar moved from Seattle to NoHo in 2014 to pursue TV acting after completing graduate studies in theater. After a year in the neighborhood, he felt the pull to return to the stage.

“I couldn't leave theater completely behind. And there was a beautiful community to jump right into that was intimate theater,” says Telesmar. “And that, literally, is the reason why I got acting on television.

A casting director saw him in a play, and he landed his first gig in the TV show “Bones.” He also got a TV agent through his stage work. Telesmar says his comfort and aptitude on sets comes from working on stage at the Road Theatre, a 66-seat venue in NoHo. He is a company member there and most recently he was the director of the the Road’s summer playwrights festival, “SPF 13.” 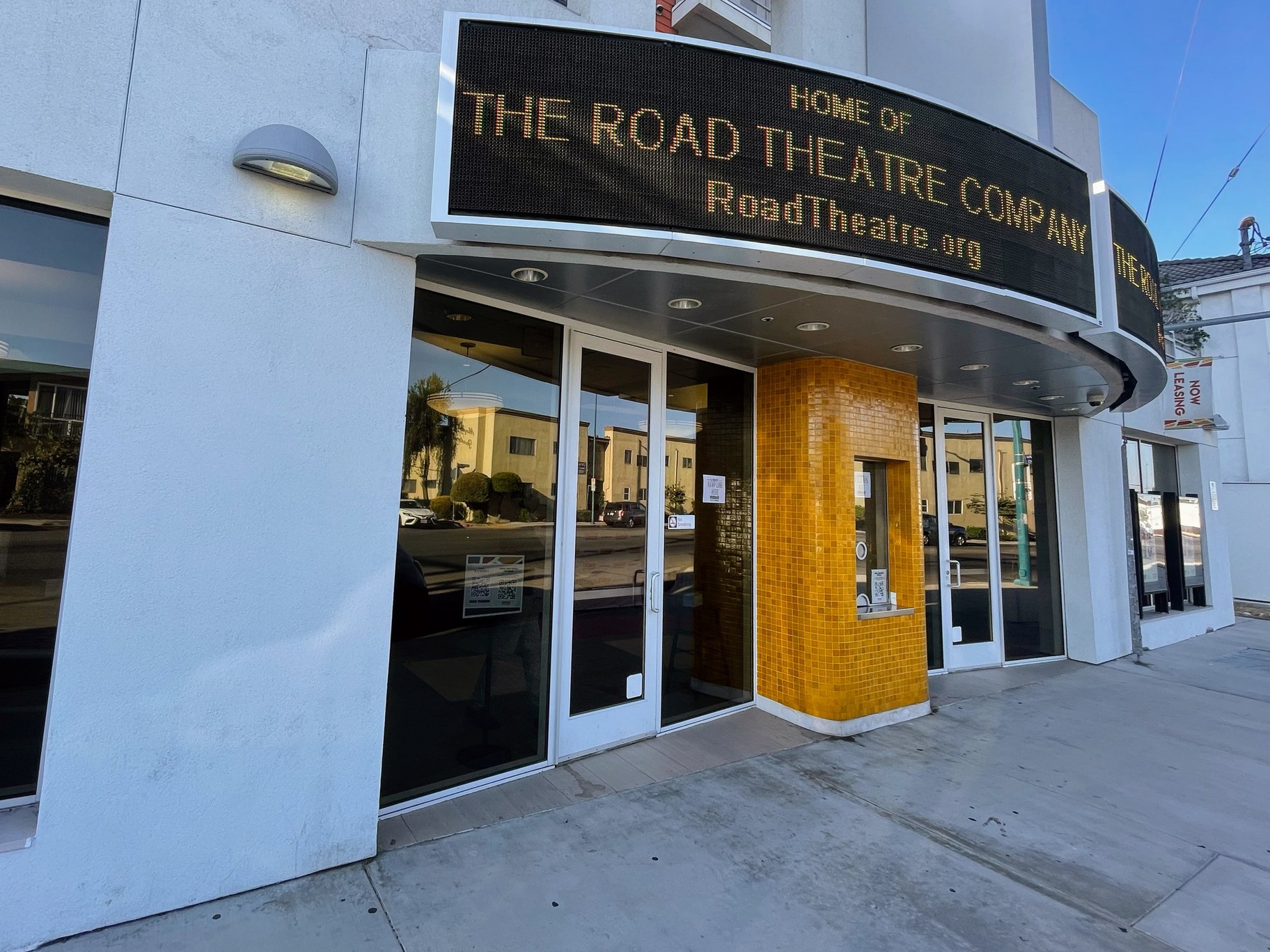 The Road Theatre Company has 173 members and has been in North Hollywood for 30 years. Photo by Megan Jamerson/KCRW.

Now with the number of theaters shrinking, actors won’t get as much exposure. There are also fewer places for writers to showcase experimental work. With finances tight, some theaters might be tempted to stick to more mainstream productions that attract larger audiences, says Taylor Gilbert, the founder and co-artistic director at the Road Theatre Company.

“It's easy to pick up the newspaper and go, ‘Oh, I'm gonna go see ‘Moulin Rouge’ because I know the movie,’” says Gilbert. “But when you're producing new work, people take a leap of faith. They show up not knowing most of the time anything about this play.”

Gilbert says her nonprofit theater is fortunate to have loyal donors and audiences, which means her mission to produce new thought-provoking works is unchanged. 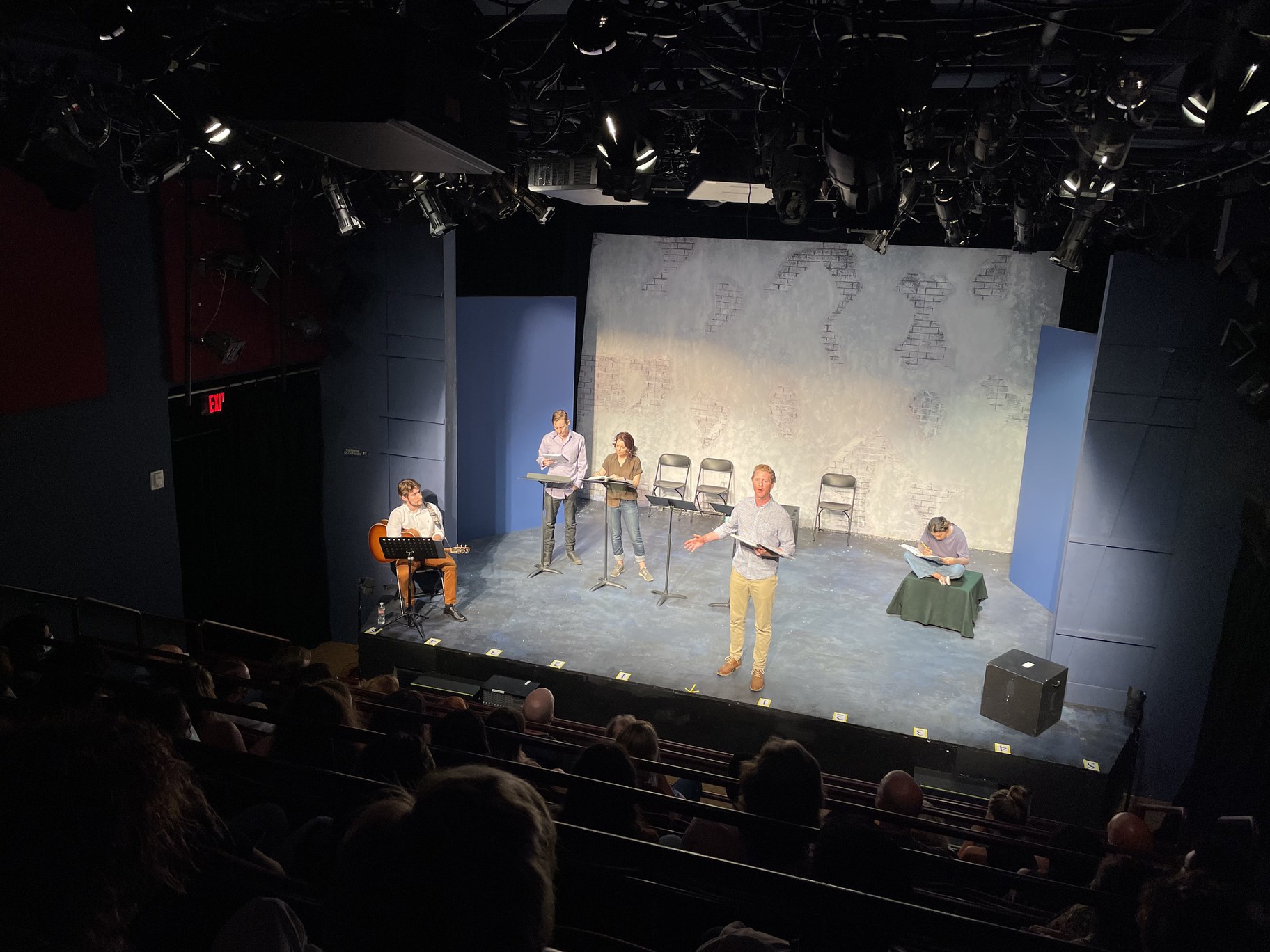 Members of the Road Theatre Company perform a reading of “Tilly Birdbones” during “SPF 13,” the theater’s summer playwrights festival. Photo by Megan Jamerson/KCRW.

On a Friday in July, the company was doing a reading of “Tilly Birdbones,” a modern fairytale by recent NYU grad Leah Plante-Wiener about a young woman slowly turning into a bird.

The theater was two-thirds full, but Gilbert says they could have done better. Older people are still not buying tickets. This is even more surprising because the Road shares a building with the NoHo Senior Arts Colony, a retirement community for artists.

The relationship between a theater and its audience is key to survival at places like Zombie Joe’s Underground Theater.

It’s almost showtime on a Saturday night, and the founder and artistic director Zombie Joe (he does not use his last name) is giving a group of about 30 people instructions about the interactive show they are about to see. It involves entering an imaginary clown world. He tells the group that the more they engage the actors, “the more you can enjoy it, if you're not totally terrified.”

This venue is a horror-themed black box theater. The productions are known for graphic violence and gory details. Since it’s not a nonprofit, ticket sales are even more important for staying open. The loyal sense of community is not something Zombie Joe takes for granted. 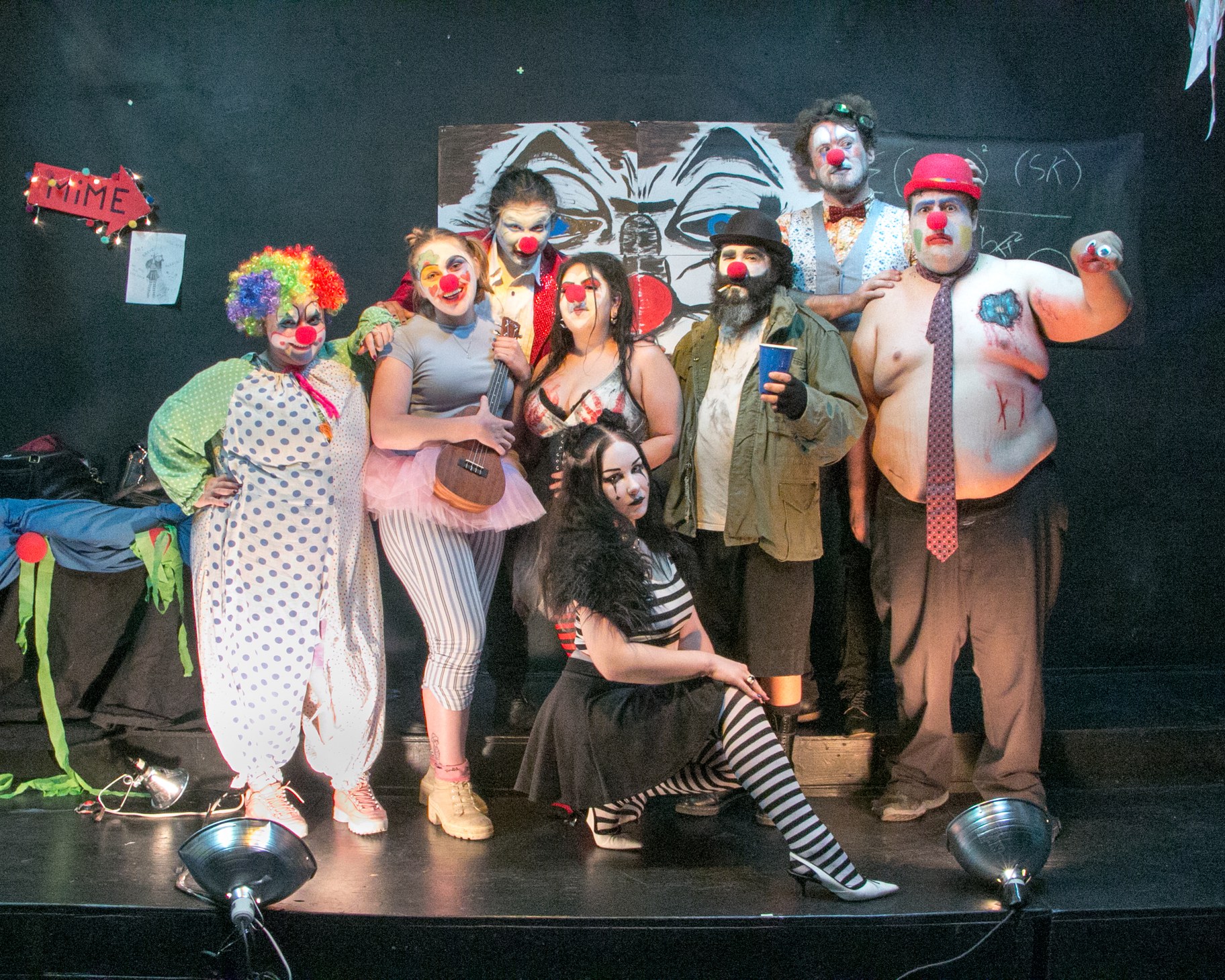 “I'm always amazed when people show up for our shows. I never expect it,” says Zombie Joe. He expresses gratitude to audience members and he tries to get to know each person who attends because “our audiences are just as much family as our company itself here,” he says.

The same week of Zombie Joe’s show, Theatre 68 got some really good news. Ronnie Marmo announced that it’s reopening in September with his new business partner Racquel Lehrman. His landlord offered the company a new lease. “I didn't know whether to laugh or cry or run for the hills or jump up and down,” says Marmo.

The 10 other NoHo Arts District theaters that closed during the pandemic still have no plans to reopen.

“I know a lot of theaters closed down, but I'm hoping that there's a rebirth and we're gonna hopefully be a part of that,” says Marmo.

As part of The Griffith Park Free Shakespeare Festival, Angelenos can watch “Macbeth” every Wednesday to Sunday at 7 p.m. through September 4. KCRW learns what goes into...

How microforests can make the air cleaner and LA greener

Microforests can be as small as 10 by 10 feet, but they go a long way in enhancing biodiversity, reducing carbon in the atmosphere, and infusing soil with nutrients.