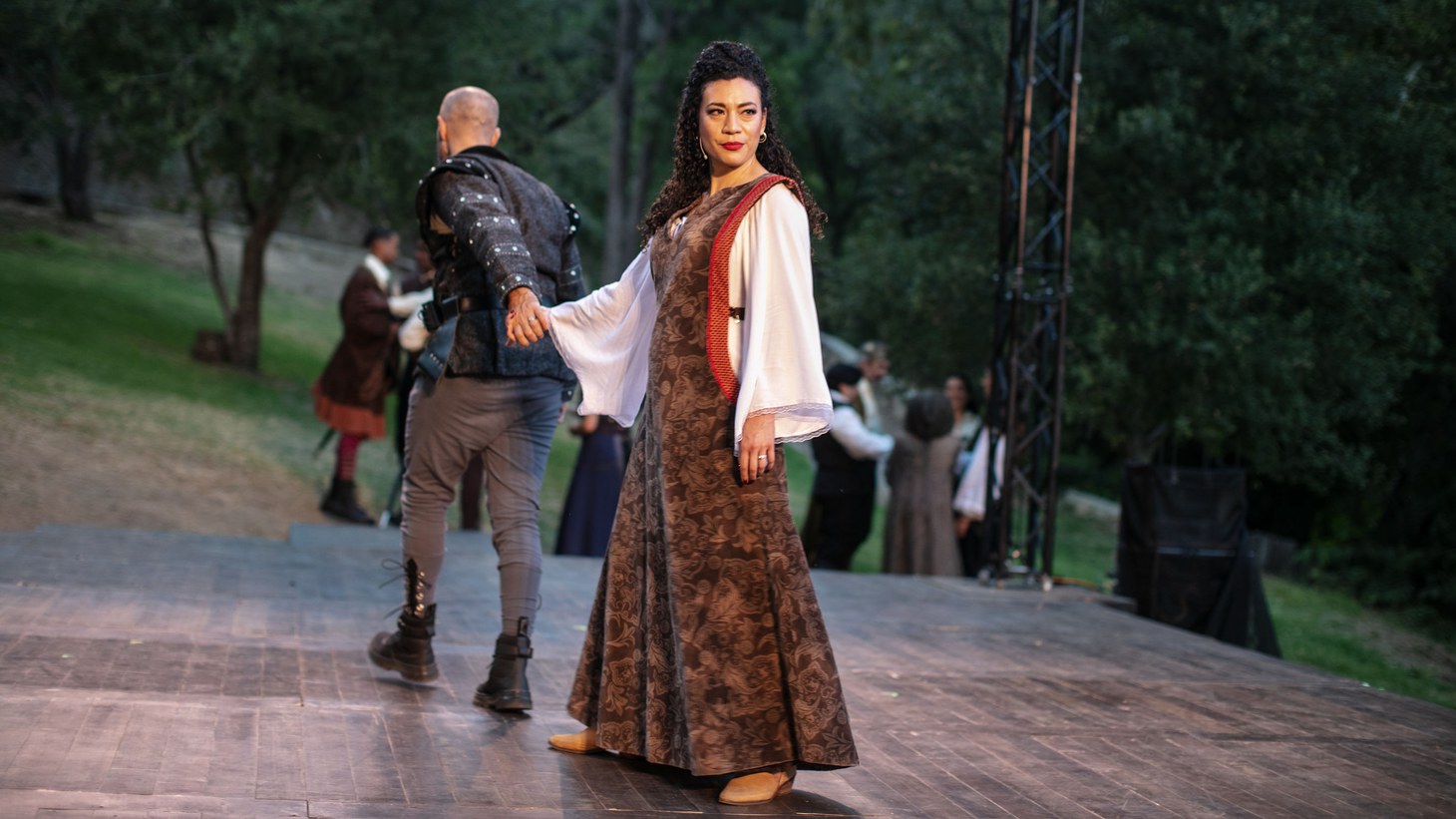 Every summer, productions of Shakespeare pop up in outdoor venues around the country, and LA boasts The Griffith Park Free Shakespeare Festival. Right now, one of the playwright’s bloodiest and best-known tragedies, “Macbeth,” is running at the park each Wednesday through Sunday night through September 4.

The festival is in its 19th year at Griffith Park, says Melissa Chalsma, artistic director of the Independent Shakespeare Company. But one thing is different this time around: They are performing in a new, more secluded area of the park.

“We're in this intimate little corner where you’re surrounded by the trees and this little valley. And it actually lends itself so perfectly to ‘Macbeth.’ And we just wanted to really embrace the environment,” Chalsma tells KCRW. “The set you're seeing is the hill, and the actors emerge out of trees and down the slope and out of the dark. And it actually works really, really perfectly to build that intimacy.”

Kalean Ung, who plays Lady Macbeth, explains that the company has been waiting since March 2020 to put on this performance. She says that getting to step back into the role, especially outside, is the best way to experience Shakespeare.

“I like to think about the audience just being an extension of me. And even if that goes several feet in front of me, I'm holding them. And so I'm just expanding my energy to them. And what's really wonderful is that we start in the daylight at 7 p.m., and I get to have them be my confidants and speak to them. And as the sun goes down, I'm just sharing more and more intimate moments, as this play continues until my end,” Ung says.

A central focus of the Independent Shakespeare Company is diversity. Chalsma says that’s because theaters have the responsibility to reflect their communities, both on-stage and among production crew.

“Shakespeare's so fantastical to begin with. It's written in verse and it's dealing with … heightened and fantastical elements. And so you're really able to cast quite broadly. And I think that's actually a moral imperative, especially in a community like Los Angeles,” Chalsma says. “We're just really an independent Shakespeare company interested in impacting our community positively, not just through the art we make, but how we make that art.”

As part of The Griffith Park Free Shakespeare Festival, Angelenos can watch “Macbeth” every Wednesday to Sunday at 7 p.m. through September 4. KCRW learns what goes into...

How microforests can make the air cleaner and LA greener

Microforests can be as small as 10 by 10 feet, but they go a long way in enhancing biodiversity, reducing carbon in the atmosphere, and infusing soil with nutrients.